In the summer of 2018, and because life imitates art, Taylour Paige found herself trying to get a job as a stripper. Just a few weeks earlier, Paige had booked the title role in Zola, a movie based on a real-life exotic dancer from Detroit and her epic, 148-tweet tale that begins, “Okay listen up. This story long. So I met this white bitch at Hooters …” and ends after Zola and said white bitch have gone on a Florida road trip from hell. There’s sex trafficking, pimping, murder, a distraught boyfriend leaping in dismay from a fourth-floor window, and heaping amounts of textual side-eye.

The tweets went viral, this magazine came calling, Hollywood followed suit, and Paige landed what she recognized could be a career-defining role. But then production got pushed, and the actor found herself with $15 in the bank, couch surfing, and starting to truly identify with the woman she was about to depict on film. “Our lives started paralleling,” Paige exclaims one recent L.A. Sunday afternoon, explaining how she and Zola (real name: A’Ziah King) had connected both over Instagram and in a cosmic, kismet way. “Our cars broke down at the same time. We considered going to Texas to strip together. I was like, ‘We can stay with my grandma! I won’t tell her what we’re doing!’”

Using Grandma’s house as an exotic-dancing launchpad was maybe not what Paige envisioned for her future when she was growing up in the Inglewood neighborhood of Los Angeles, a cloistered “neurotic” kid who bestowed feelings on inanimate objects and couldn’t go to sleep at night until she was sure all of her stuffed animals were comfortable in the bed — even if she wasn’t. Her parents had split when she was two, her older brother had moved out when she was nine, and her teenage years had been spent alone with her extremely Catholic, extremely controlling mother. “That was really rocky. We had a rough go of it,” Paige says. “It was just a lot of guilt and fear and name-calling and yelling, not being able to make my own decisions or do my own hair or dress myself or have thoughts.”

When she was 12, as a form of “escapism from my home,” Paige started studying ballet under the legendary dancer-choreographer Debbie Allen, kicking off the grueling schedule of a serious athlete: Catholic school every day until 3 p.m.; dance from 4 until 8 p.m.; homework until 2 a.m.; then waking up at 6 a.m. to do it all again. She didn’t attend homecoming. She did attend the Kirov Ballet Academy in Washington, D.C., for two summers. “I was always tired,” she says. “I wanted to try new things, and my mom was just like, ‘Sorry.’”

One day a guy showed up at Allen’s studio and asked, “Who’s the girl in the purple shorts?” The girl turned out to be Paige, and the guy turned out to be a producer who got her a part in High School Musical and generally tried to push her toward a “kind of, like, ‘Disney’” career she didn’t want to have. Then again, Paige wasn’t sure what she wanted. By the time she was at Loyola Marymount University, she was taking all the L.A. acting classes she could — an exercise, in part, to help her figure out who, exactly, she was when not under her mother’s thumb. “When you don’t really know yourself, you’re auditioning for your personality,” she explains. “You’re waiting on the world to inform you who you are. And you’re going from the outside in.”

After a three-month, much-hated stint as a Laker Girl, Paige booked a part basically playing a Laker Girl on the VH1 sports dance-team drama Hit the Floor. She lasted three seasons. “After a while, I was just over it,” says Paige. “I was starting to know who I was and what stories I wanted to tell.” The problem was that Hit the Floor didn’t exactly brand her as being able to tell them. The acting gigs trickled in. Before she booked Zola, she was at a low point, she says. “I was cleaning houses, nannying, worked at Barry’s Bootcamp, worked at a weed dispensary … I was doing vision boards and, you know, manifesting — but, oh, my God, so much was just not working out.” 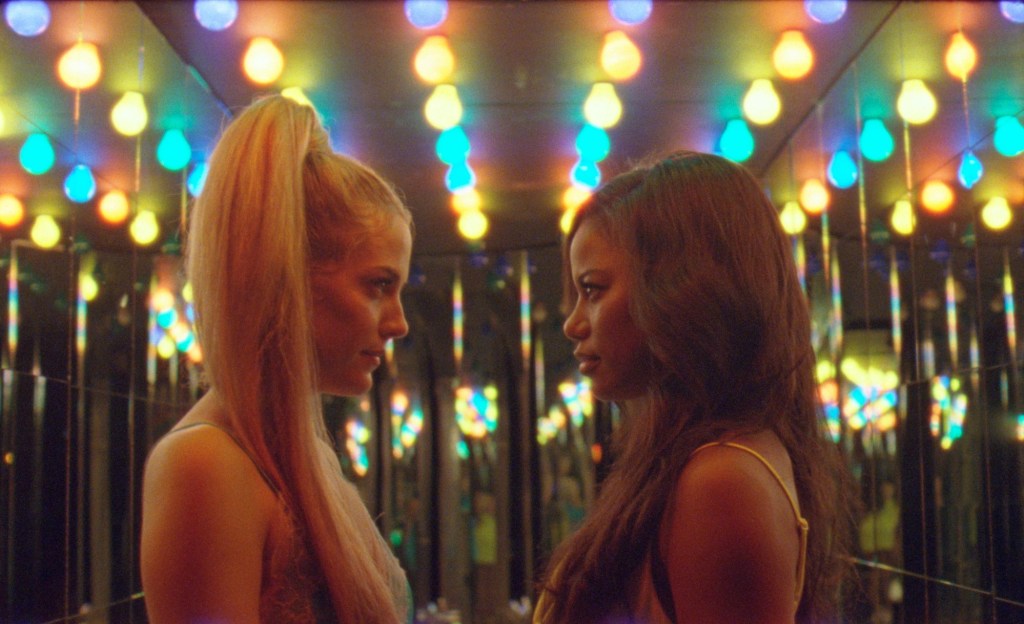 Riley Keough and Paige in ‘Zola.’

The same could be said for Zola, which by this point had been wrested from the hands of two white, male writers and turned over to director Janicza Bravo, who previously told Rolling Stone that the original script “was leading with its dick” (after reading an early version, Paige had initially said she wasn’t interested). Bravo auditioned more than 700 women for the part. When she ran into Paige at a coffee shop in the spring of 2018, “that was it. She walked right in, and I knew. The way she moved. The way she carried herself. … It’s rare to find someone who wears vulnerability so comfortably around their eyes while holding such strength in their body.”

Paige brought a gravitas to the character that not even Bravo had realized it needed. As the world around Zola slips into stylized madness, Paige’s hero grounds the narrative — and cleverly subverts expectations around how black women are usually portrayed on film. “Riley’s in blackface the whole movie,” Paige says of her co-star, Riley Keough, who plays Stefani, the over-the-top “white bitch” foil to Zola’s straight woman (and who, for the record, is not literally in blackface). Meanwhile, Paige embodies the nuances of someone who realizes that she’s playing a character who is also playing a character (in one scene, she simply faces a wall while Stefani screws a john several feet away, providing an absolute master class in how to emanate boredom and horror simultaneously). “I’m a recovering people pleaser, and so one of my biggest things that I have to work through is learning where I stop and where someone else starts, and then [using] that to build a character,” Paige notes. “I just knew, stepping into Zola, that I had to stop apologizing.”

That was perhaps most pointedly true when it came to her feeling confident in her own sexuality. “I don’t feel sexy — I feel silly,” says Paige. “And I’ve grown up such a prude, so guilty around sex and like, ‘Is this OK? Am I doing it right?’” In her career, she explains, “it almost feels like the universe has given me opportunities to find and claim back my agency and sexuality.” This does not mean that recent rumors that she’s dating Zoë Kravitz are true (“No,” she says, laughing, “but I love that for me”). It does, however, mean that she’s taken on roles — in Ma Rainey’s Black Bottom, Eddie Huang’s Boogie, the Detroit drug-gang drama White Boy Rick — in which her characters are initially sought out for their sexiness but go on to have more complex journeys than that might imply.

In Zola, of course, that was literally the point. “I wasn’t trying to look like a ballerina on the pole,” she says. Which means she needed to practice not looking like a ballerina on the pole. A day trip to Vegas to strip turned out to be a Catch-22 disaster: The clubs said she needed a license to dance, but the sheriff’s office said she needed a job to be able to get that license. Once she’d managed — with effort — to procure it, she flunked her audition. “He was like, ‘Take your top off.’ I take my top off. He’s like, ‘Start trying to dance.’ And then he’s like, ‘Not this time!’”

Through a friend of a friend, she finally wrangled her first stripper job, at Crazy Girls off Sunset Boulevard (according to online reviews, it has great fried chicken, iffy security, and a high prevalence of butt implants). Working there was research for Zola, but also, Paige tells me, “I needed the job.” And needing the job may well have been the best research of all. “It’s not like the privilege of having a pole in your living room. You know what I mean? Like, ‘I’m going to take some pole classes to get sexy for my husband.’ That’s not what this is. This is survival. Like, ‘Fuck it. I can probably make 2K a night.’” Not that she ever actually did. “I wasn’t good enough,” she says wryly. Nor did she and the real Zola ever make it to Grandma’s. “I couldn’t afford it! I couldn’t afford to fly! But,” she muses, “it would have been another movie.”

Source link This piece originally appeared as part of Rolling Stone’s annual Hot List, in the July/August issue of the magazine.