“YouTube [has] our music, whether we choose to license them or not… They say they bring users into the licensed ecosystem, but at such a paltry return that they might as well be in the pirate world.” So spoke Martin Mills, co-founder and Chairman of Beggars Group — home to labels including XL Records, 4AD and Matador — in June 2017.

“YouTube’s growth for [our] business over the past couple of years has outpaced everyone as well as the market itself, and is now well on its way to deliver the potential of its huge audience to the music industry, as these revenue figures now show.” Those are the words of Mills in June 2021.

What a difference four years make.

For context, in 2017, Mills was taking a shot at YouTube’s “safe harbor” protections in Europe, which insulated the Alphabet-owned platform from legal endangerment at the time, even if open piracy was taking place on it. The European Parliament has since updated those laws to make YouTube theoretically liable for such activity — but, thanks to Brexit and wishy-washy “non-binding” implementation, they remain toothless in key markets such as the U.K. and Germany.

Why the stark difference in Mills’ attitude, then? It comes down to the strides YouTube has made to directly appease the record industry. YouTube launched a subscription music-streaming service in June 2018 to quench record labels’ criticisms of low payouts from its free offerings — and it’s also now stuffing a huge amount of advertising cash down the chute to music rights-holders.

YouTube’s global head of music Lyor Cohen revealed last week that YouTube has paid out over $4 billion to music rights-holders in the prior 12 months. This money was generated cumulatively by YouTube’s “twin engines” of 1. subscriptions to YouTube Music and 2. the cut of advertising on music videos that YouTube pays out to record companies and music publishers. In the latter category, amateur, user-generated content (UGC) — think cat videos soundtracked by Lady Gaga tunes or influencer cooking vlogs using Diplo in the background, rather than official artist music videos — was directly responsible for 30 percent of the $4 billion total, said Cohen.

That’s $1.2 billion in royalty payouts over the last year, or $100 million a month landing in the pockets of labels, publishers, songwriters, and artists. From cat videos.

Critics of YouTube feel this is still far from enough money. They point to the fact that over two billion YouTube users are consuming music on the platform each month. So, via simple math, Cohen’s $4 billion figure suggests that the music industry is getting just $2 per year from each music listener on YouTube.

This is a much smaller figure than the per-user money coming to music rights-holders from Spotify: Across advertising and subscription in fiscal year 2020, Spotify generated €7.88 billion ($8.90 billion) and said that “roughly two-thirds” of this was paid out to music rights-holders — around $5.88 billion — so, dividing that by Spotify’s 354 million monthly active users, this suggests the music industry gets approximately $17 from each Spotify user every year. That’s eight times bigger than a YouTube user’s contribution.

Yet there are other interesting ways to slice this. Cohen says that YouTube paid out at least $1.2 billion to rights-holders in the past year from ads on user-generated videos. Spotify’s entire ad-funded business (its “free tier”) generated $842 million in a similar period period, meaning that it paid rights-holders somewhere around $555 million. So Cohen’s cat-video crew is already sending record labels twice the amount of money that Spotify does from its ad-supported business, and that’s not even counting the ad revenue from professional music videos.

Announcing this target now is strategic. Global subscriptions to YouTube Music, which include bundled YouTube Premium subscriptions, stood at 30 million at the latest count in October 2020. That’s quite a way behind Spotify, which has about 158 million subscribers. However, music business insiders tell me that YouTube Music subs surpassed 40 million in February (not including Family Plan users) — doubling from 20 million just a year ago.

Even more formidable is the new growth of YouTube’s advertising business, which is not only now a ten-figure annual contributor to the music industry, but is really starting to soar in the post-pandemic environment of 2021. According to recent Alphabet investor filings, YouTube generated $6 billion from ads in the first quarter, up by 49 percent year-on-year. Music rights-holders, meanwhile, are now consistently receiving a sum from YouTube equivalent to 20 percent of the platform’s ad business each year.

If, as expected, YouTube’s ad business generates around $30 billion across calendar 2021, this would result in a cool $6 billion hitting the pockets of record labels and music publishers.

Shocking statistic alert! A $6 billion payout from YouTube in 2021 would be larger than what Spotify paid the music industry (over $5 billion, per CEO Daniel Ek) in 2020. 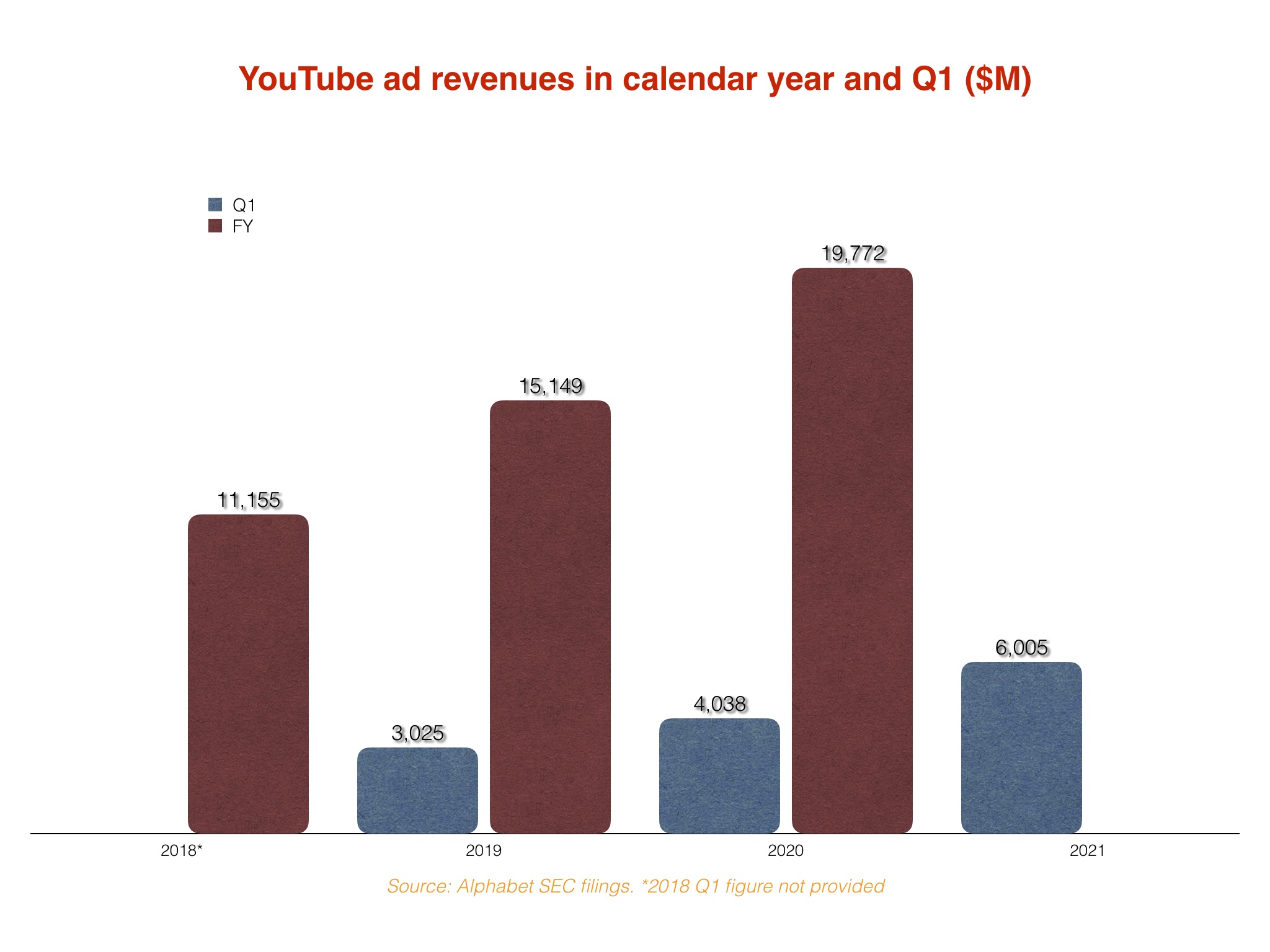 How long might it take YouTube to permanently overtake Spotify as the the music industry’s number one sugar daddy? To predict this tipping point, let’s look at some historic growth rates.

Within Spotify’s recent annual report, the company confirmed that “our expenses for rights-holders grew by 17 percent compared to the prior year.” If we retrospectively apply this 17-percent growth metric to Ek’s $5-billion-in-2020 figure, it indicates Spotify paid out somewhere around $4.3 billion to rights-holders in 2019, and grew this by around $700 million in 2020.

Now let’s look at YouTube’s $4-billion-in-the-last-year figure. (YouTube tracked a slightly different period than Spotify, June 2020 to May 2021, but both services reported figures for a 365-day year.) The $4 billion figure is 33.3 percent higher than YouTube’s last reported payout: In February 2020, YouTube’s boss Susan Wojcicki confirmed that the platform paid music rights-holders over $3 billion in calendar 2019.

There is one more tweak required before we start mapping out the future: YouTube’s 33.3-percent growth here was over the span of 15 months (from end of 2019 to end of May 2021) while Spotify’s 17-percent figure reflects pure year-over-year growth. If we proportionately reduce YouTube’s 33.3-percent figure to 12 months rather than 15 months, its projected annual growth figure gets trimmed to 26.6 percent year-over-year.

This gives us enough rough numbers to play with. 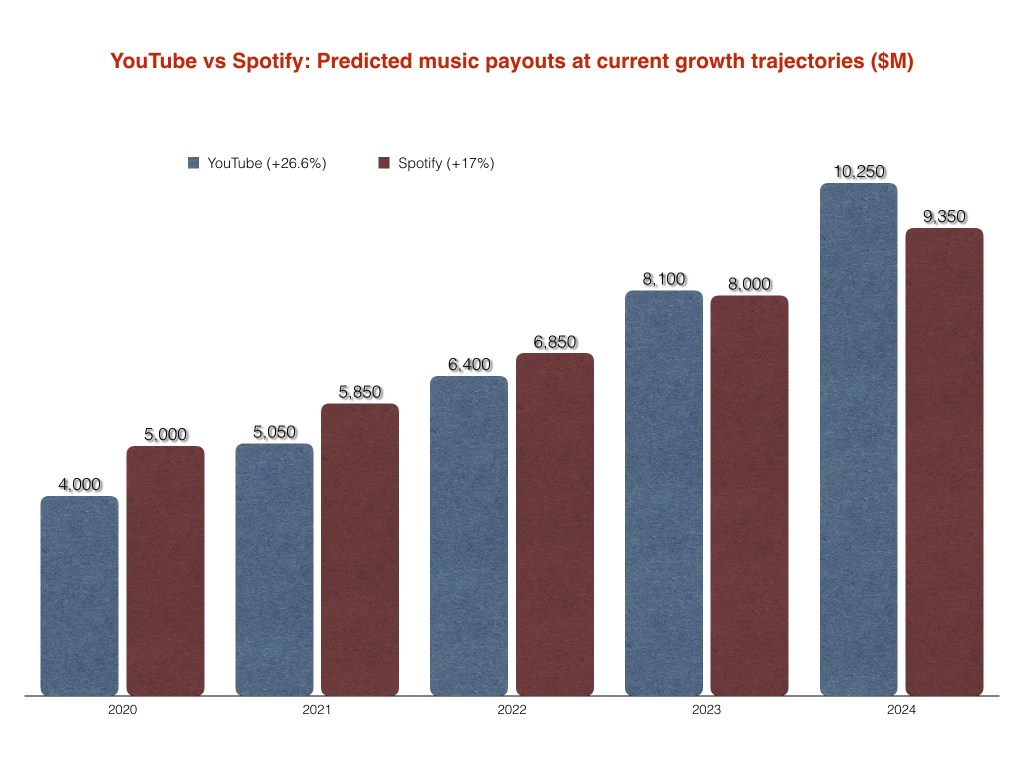 The above chart maps out what would happen to Spotify and YouTube’s annual music business payouts in the next few years, should they both stay on their current courses (based on a flat $5 billion payout for Spotify and a flat $4 billion for YouTube in 2020 — though in reality the latter number obviously ran mid-year 2020 to mid-year 2021).

As you can see, if YouTube’s payouts keep climbing at a 26.6-percent annual rate vs. Spotify’s 17-percent rate, YouTube will overtake Spotify somewhere around the end of 2023.

The above graph also doesn’t take into account that YouTube’s ad revenues were up by that stunning 49% year-over-year in the first quarter of 2021. It also ignores that Spotify is now readying its investors for slower global subscription growth in 2021: The streaming service says it expects between 7 million and 11 million new subscribers this year, after adding 11 million new people in 2020.

I’d therefore suggest that unless Spotify can pull something spectacular out of the bag, YouTube’s “twin engines” may actually eclipse Spotify’s payouts even sooner — perhaps even at some point next year.

Just four years ago, YouTube was lambasted as a “value gap” monster by many powerful music rights-owners. Within the next 18 months, as Beggars Group’s Martin Mills is already indicating, it will start looking more like the industry’s very best friend.

Tim Ingham is the founder and publisher of Music Business Worldwide, which has serviced the global industry with news, analysis, and jobs since 2015. He writes a regular column for Rolling Stone.