Skip to content
Home » News » What Is the Most Expensive Comic Book Ever Sold?
News

What Is the Most Expensive Comic Book Ever Sold?

Comic books have always been popular, but they’ve had something of a resurgence these past 15 years. With the Marvel Cinematic Universe bringing more attention to the comic book world, the comics themselves have found a greater audience. This has led to many old and rare comics increasing exponentially in value. Some of the most expensive comic books ever sold are fan favorites readers wish they could own. So what is the most expensive comic book ever sold?

For many years it was Action Comics No. 1 from 1938, but that has changed in recent years. As the comic book boom has continued in modern times, many classic titles are now fetching a fortune at auction.

While Action Comics and Detective Comics’ first issues still dominate the market, there are many other classic comics from the Bronze Age to the Modern Age that are worth a small fortune. Shining a light on these rare and expensive comics, here are the 14 most expensive comic books ever sold.

The 14 Most Expensive Comic Books Ever Sold 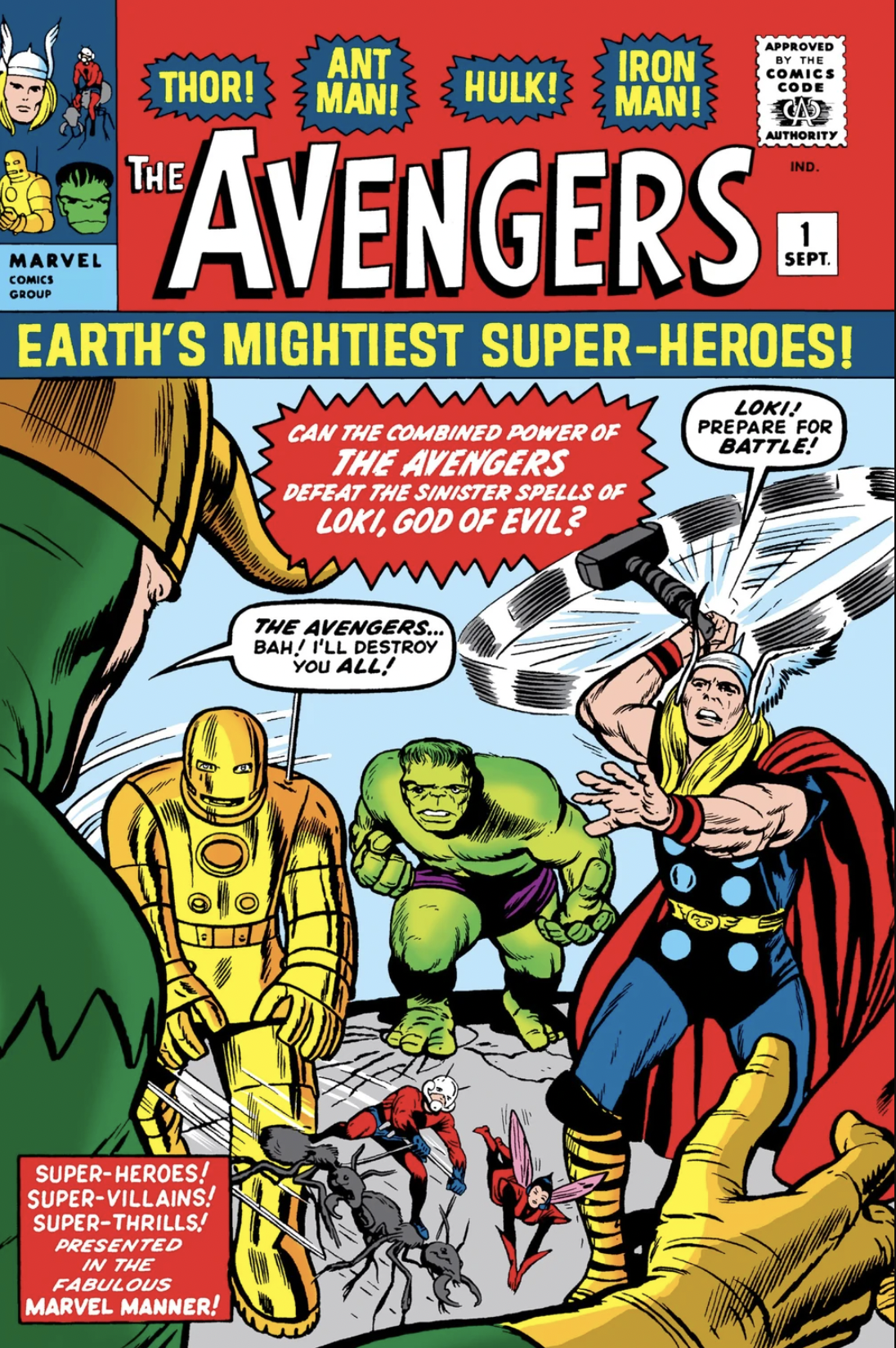 The most expensive comic featuring the Avengers is a copy of The Avengers #1 that sold for a solid $185,000 in 2012. Given a grading of 9.4 by the Certified Guaranty Company, the comic debuted in September 1963, the same year as X-Men. The first appearance of the famous group in comic book form includes appearances from Thor, Hulk, Ant-Man, Wasp, and Iron Man. 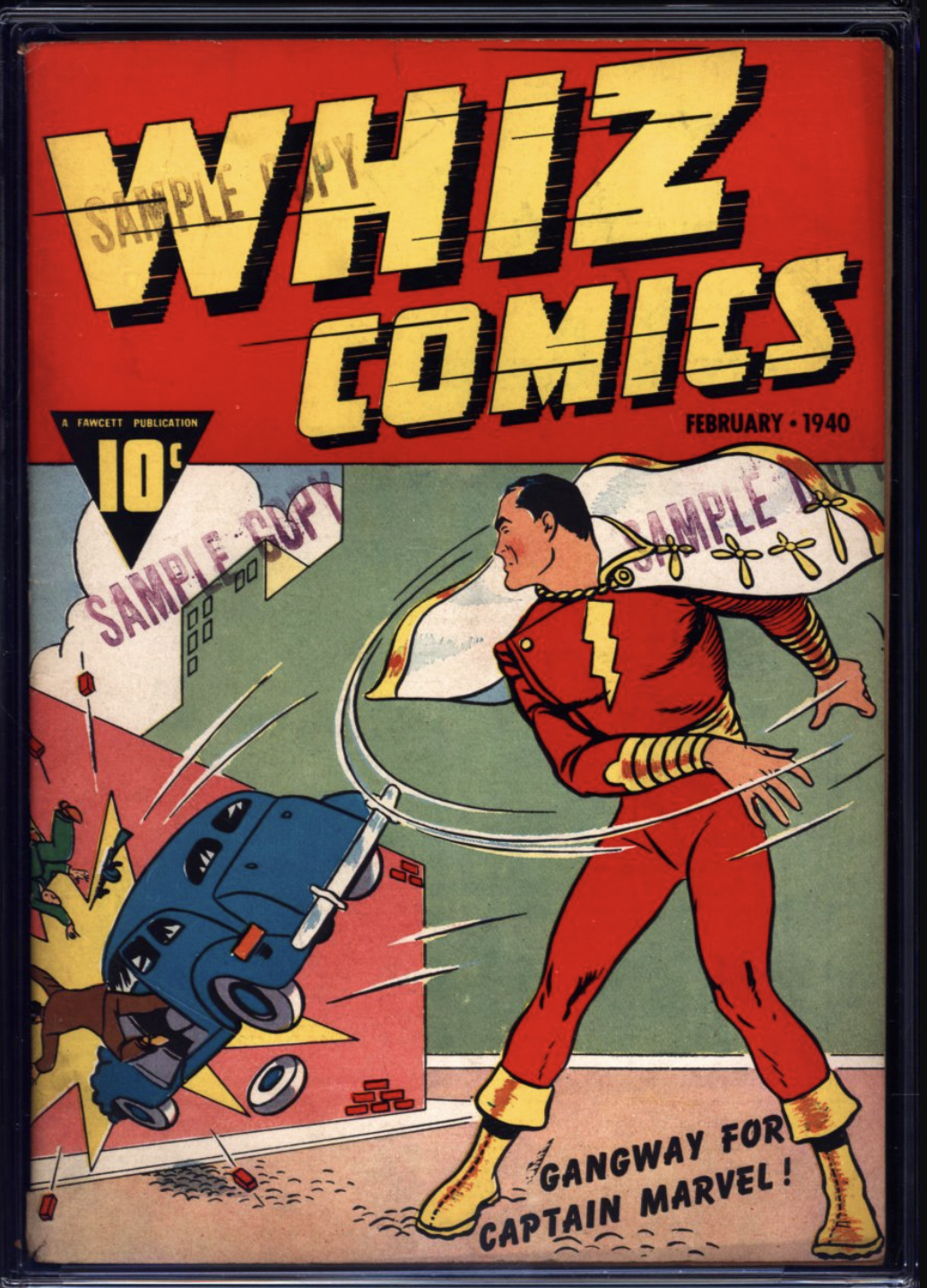 Although it is officially listed as the second issue, Whiz Comics #2 is actually the first. The original run was used as promotional copies, with Whiz Comics #2 the real release. While this certainly aids in the $281,000 price tag, the first appearance of Captain Marvel, these days known as Shazam, is also another reason why this is such a sought-after comic book. 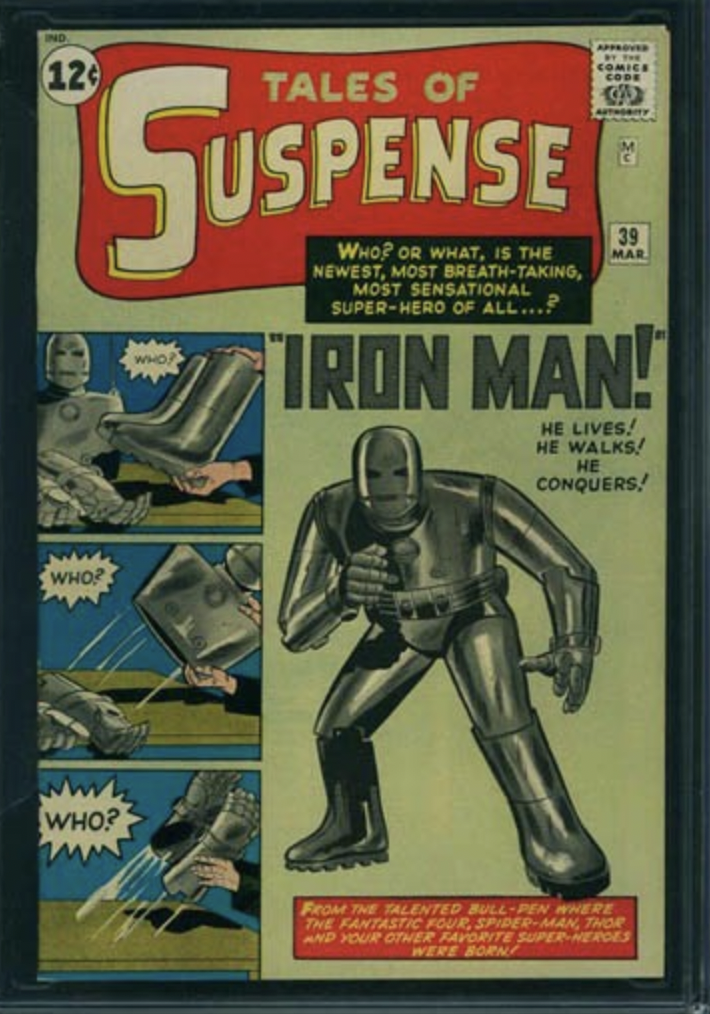 The third highest-selling comic book from the Silver Age, Tales of Suspense #39 is the coming-out party for Iron Man. Written by Stan Lee and drawn by Jack Kirby, the front cover of the comic states, “He lives! He walks! He conquers!”

This version of Iron Man is quite different from the modern interpretation, with Tony Stark decked out in a grey suit. His memorable red and yellow outfit would come later. This issue sold for $375,000 in 2012 at the height of Iron Man fever thanks to the Robert Downey Jr. films.

At the time it was sold, Josh Nathanson from Certified Guaranty Company said, “The importance of this issue has always been clear. Iron Man has been a major player in Marvel’s stable of heroes since his 1963 introduction and was a founding member of the Avengers super-team. He has been featured in countless comic book storylines from that time until the present day and has always been a popular superhero. However, with the release of two well-done Iron Man movies, with Robert Downey Jr. playing Tony Stark to perfection in both, Iron Man has been solidified as an ‘A-list’ superhero with buzz comparable to that of Spider-Man’s.” 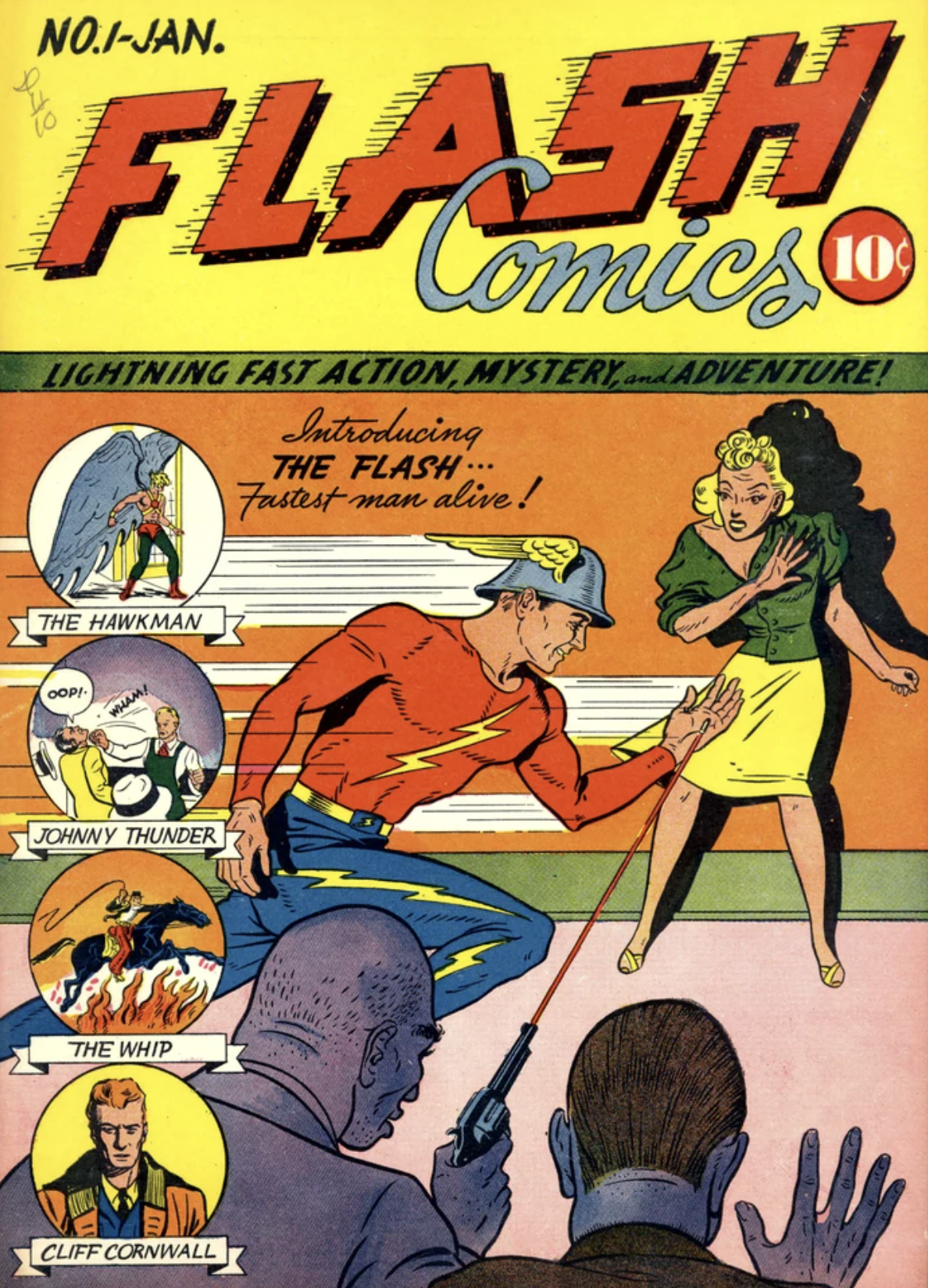 As the name suggests, Flash Comics #1 features the first appearance of the Flash. There have been several iterations of the Flash, but in this first issue, the fastest man in the universe goes by the name of Jay Garrick. Part of the Golden Age of comics, Flash Comics #1 was created by writer Gardner Fox and artist Harry Lampert. In the comic, Garrick is a college athlete who gains his powers after inhaling hard water vapors. 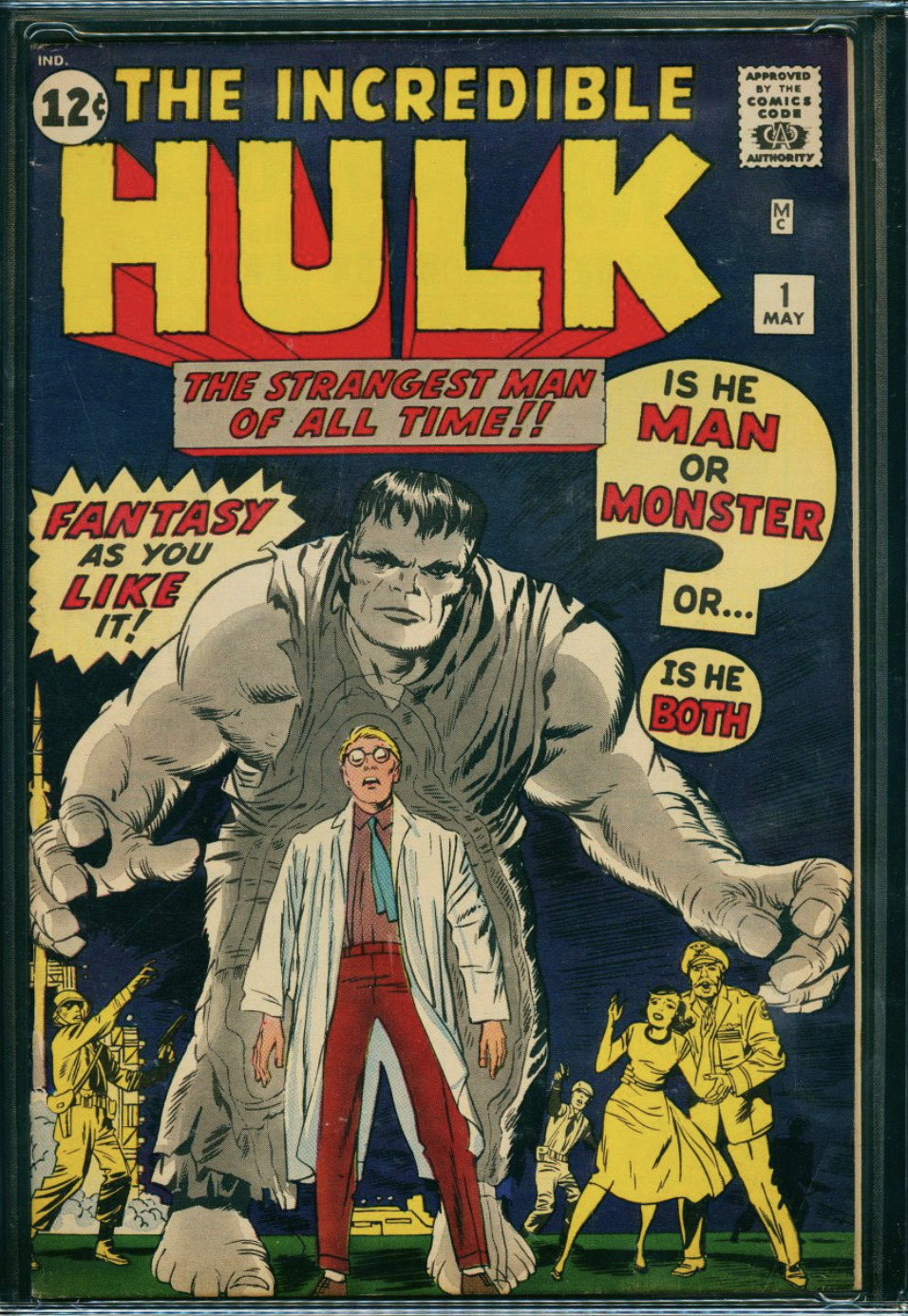 First published in 1962, the first edition of the Marvel comic Incredible Hulk sold for $490,000 in 2022. This rare comic book was purchased by a private collector via Comic Connect.

An iconic Stan Lee and Jack Kirby creation, Incredible Hulk #1 tells the origin story of Bruce Banner/Hulk. Banner is a scientist who is exposed to toxic materials that cause him to transform into the Hulk when angered. This particular comic is notable for the Hulk being grey, as opposed to green. The reason for the change from grey to green was due to printing problems.

This issue is graded near mint condition by the experts at Comic Connect. “Highly graded copies of Hulk No 1 are notoriously hard to find, due to the cheap paper used and the smudging of the grey color on the front cover,” Comic Connect’s Vincent Zurzolo told The Guardian. 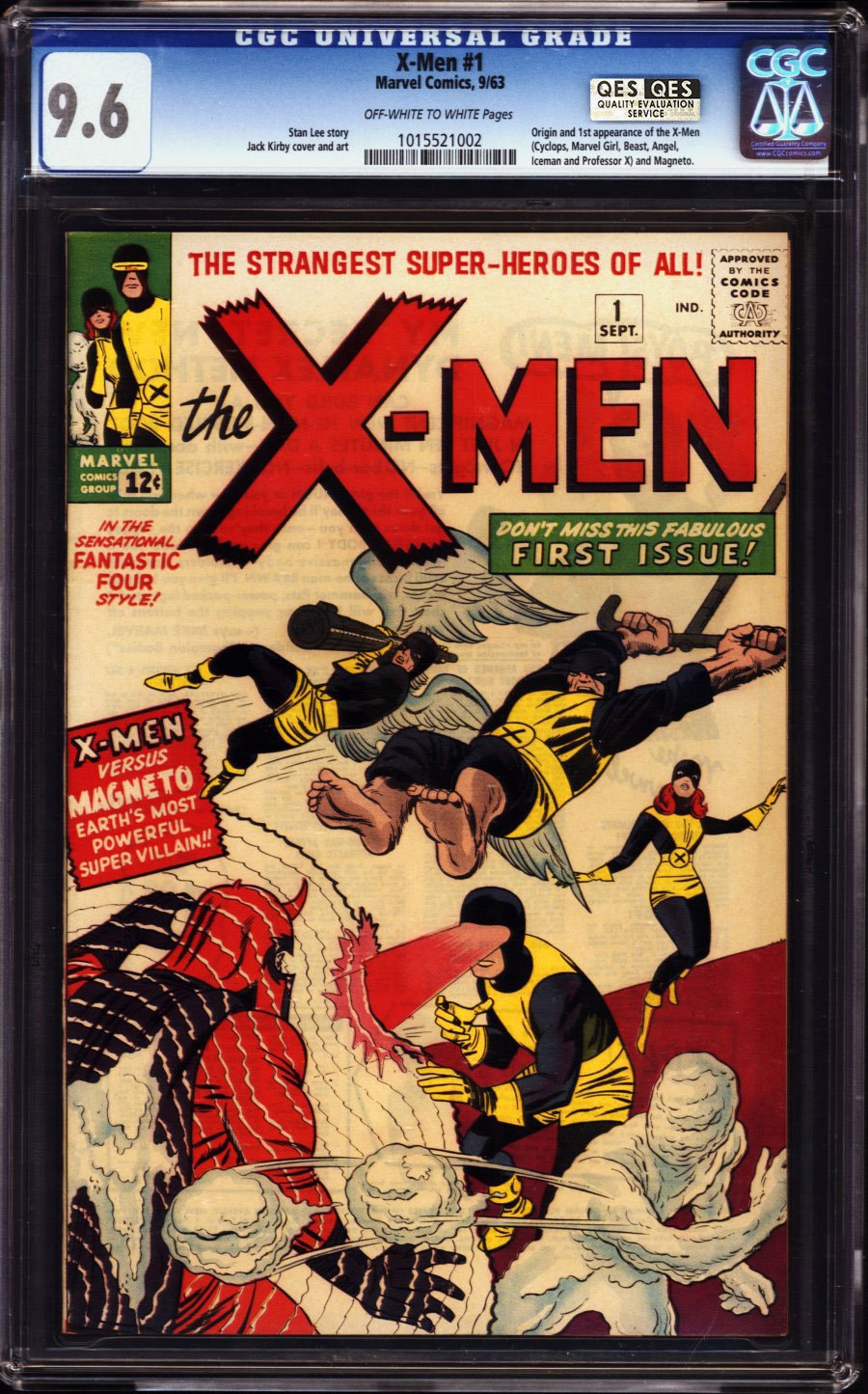 A near-mint condition of the first-ever X-Men comic sold for $807,300 in 2021. Written by Stan Lee and drawn by Jack Kirby, this 1963 comic features the mutant supergroup for the very first time. The original line-up of the superhero group is made up of Cyclops, Beast, Angel, Marvel Girl, Iceman, and their fearless leader Professor X. Villian Magneto also makes his first appearance in the comic.

The issue of X-Men No.1 which sold for $807,300 has been graded a 9.6 by the Certified Guaranty Company. That’s about as close to mint condition as you can get. Sold by Comic Connect, there were over 50 bids for the particular issue. It sold for $300,000 more than the previous copy that went up for auction in 2012. 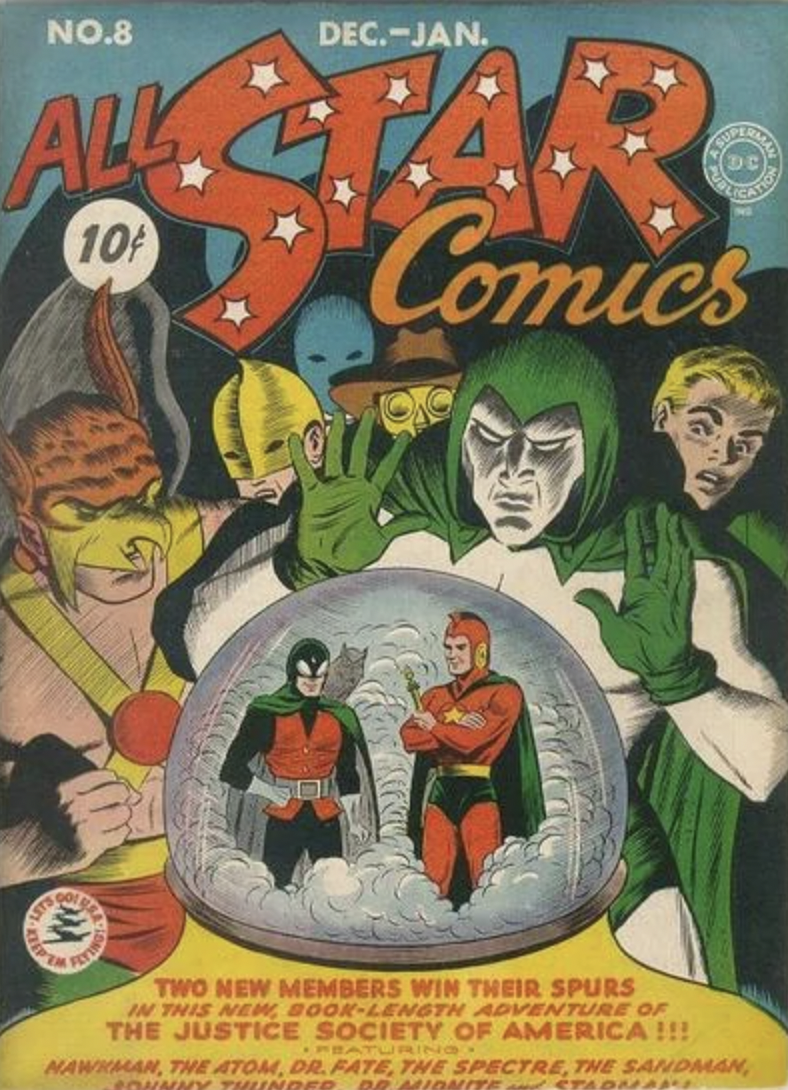 This probably isn’t a comic you are that familiar with, but it’s worth a pretty penny. As well as being one of the oldest comics on this list, All Star Comics #8 marks the first appearance of Wonder Woman. Released in 1942, it features the Justice Society of America, which includes characters such as Doctor Fate, Sandman, and Johnny Thunder.

Written by Gardner Fox and drawn by Everett E. Hibbard, who also did the cover art, a highly-graded copy of this comic sold for $936,223 in 2017. An average condition copy of All Star Comics #8 sells for around $90,000, while those in poor condition can still fetch a couple of grand, with one even going for $25,000.

A hard-boiled detective anthology, Detective Comics features a bunch of different characters and stories. The most popular tales follow the adventures of the much-loved Bruce Wayne, otherwise known as Batman. He pops up for the first time in Detective Comics #27which was created by artist Bob Kane and writer Bill Finger. In the comic, Batman, known as Bat-Man, investigates a murder and uses his detective skills to help Commissioner Gordon solve the case.

Described as “the amazing and unique adventure of the Batman,” this issue of Detective Comics No. 27 sold for $1.5 million in 2020. That beat the previous copy of the 1939 comic that went for $1,075,000 a decade earlier. The comic was sold by Heritage Auctions, whose Vice President Barry Sandoval wasn’t shocked by the high price tag.

“I’m not at all surprised at the result,” he said. “After all, this is one of the best copies you will ever see of one of the most important comic books ever published.” 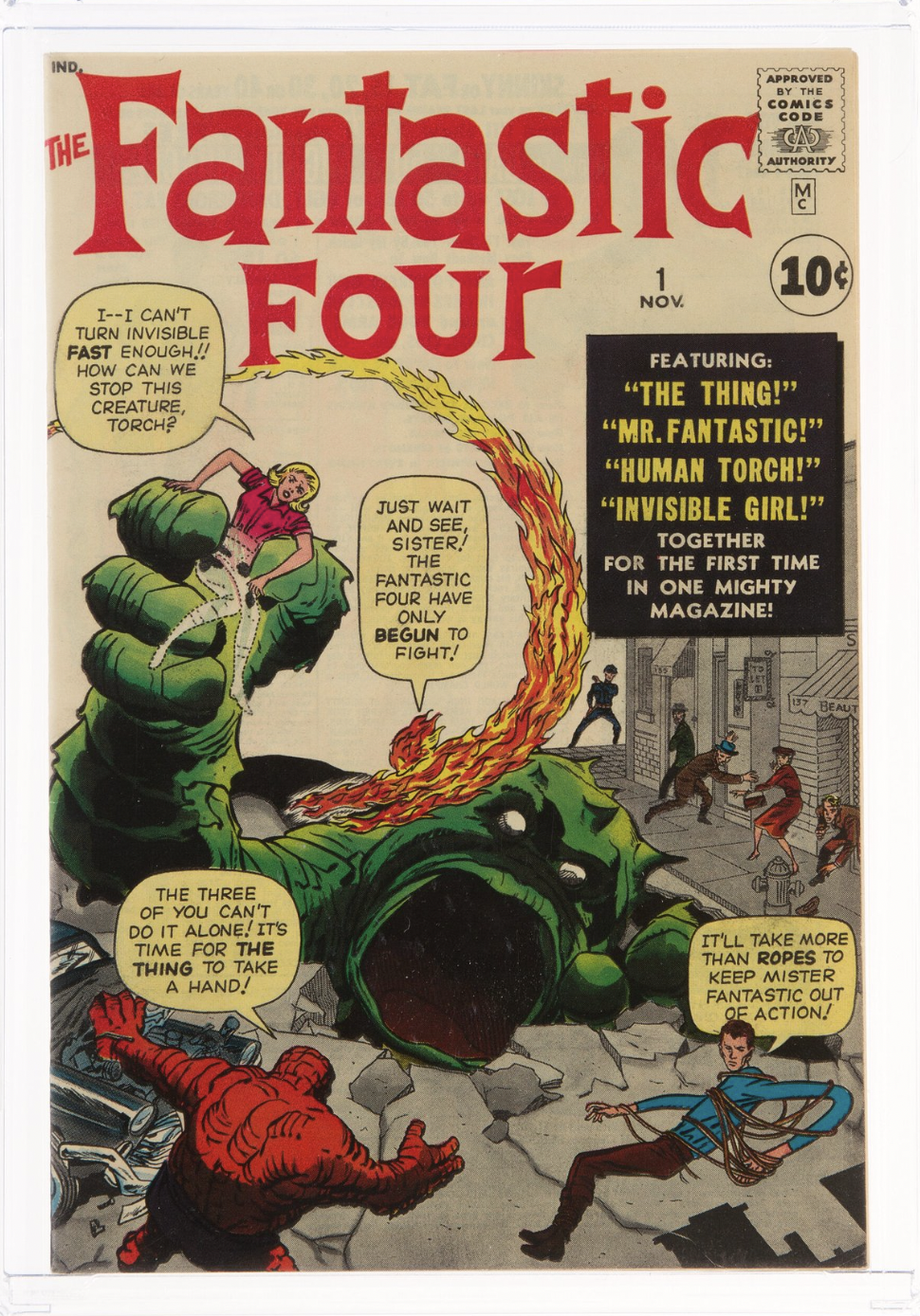 It seems Marvel’s Fantastic Four are just as popular as Batman. A first edition of the Fantastic Four #1 also sold for a tidy $1.5 million at auction in 2022. The Certified Guaranty Company gave this copy a high grading of 9.2, with only five other comics gaining a higher grading. The pre-sale estimate for Fantastic Four #1 was just $210,000, with the eventual $1.5 million sale price blowing early predictions out of the water.

The comic finds the superhero foursome, comprising Reed Richards, aka Mister Fantastic, Susan “Sue” Storm, aka Invisible Girl, Johathan “Johnny” Storm, aka Human Torch, and Benjamin “Ben” Grimm, aka The Thing, taking on the baddie known as the Moleman. 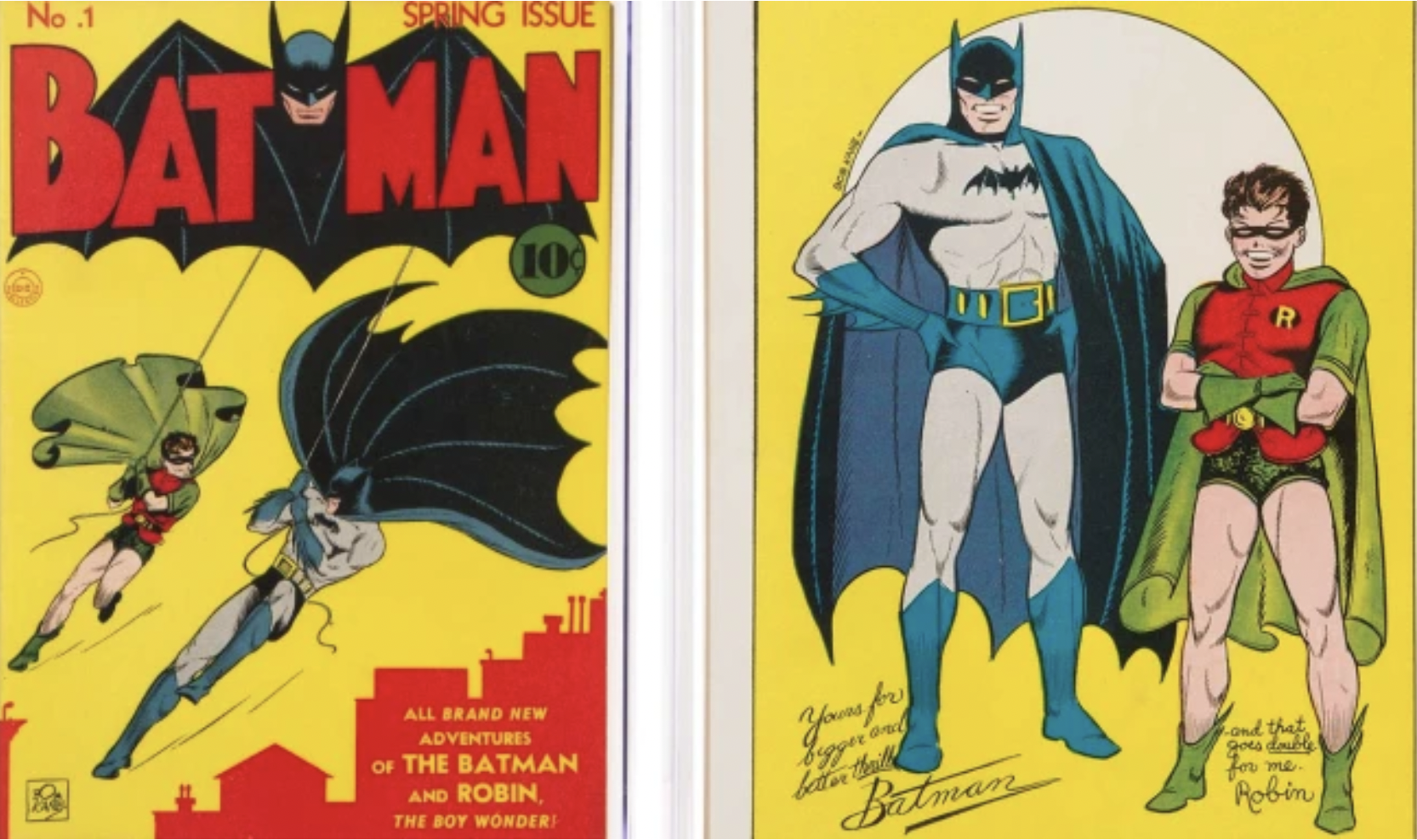 It’s no surprise the first issue of a Batman comic appears on this list. While this is not the first time The Dark Knight has appeared in comic book form, it is the first comic to bear his name.

Batman #1 hit shelves in 1940 and features not only Batman and his trusty sidekick Robin, but also The Joker and Catwoman. The comic, in near mint condition, sold for $2.2 million in 2021.

The previous owner, collector Billy T. Gates, had owned the comic for more than 40 years. He purchased it for the low price of just $3,000 in 1979 from a comic book shop in Houston, Texas. Gates passed away in 2019 and left his comic book collection to his son, who decided now was the right time to cash in. 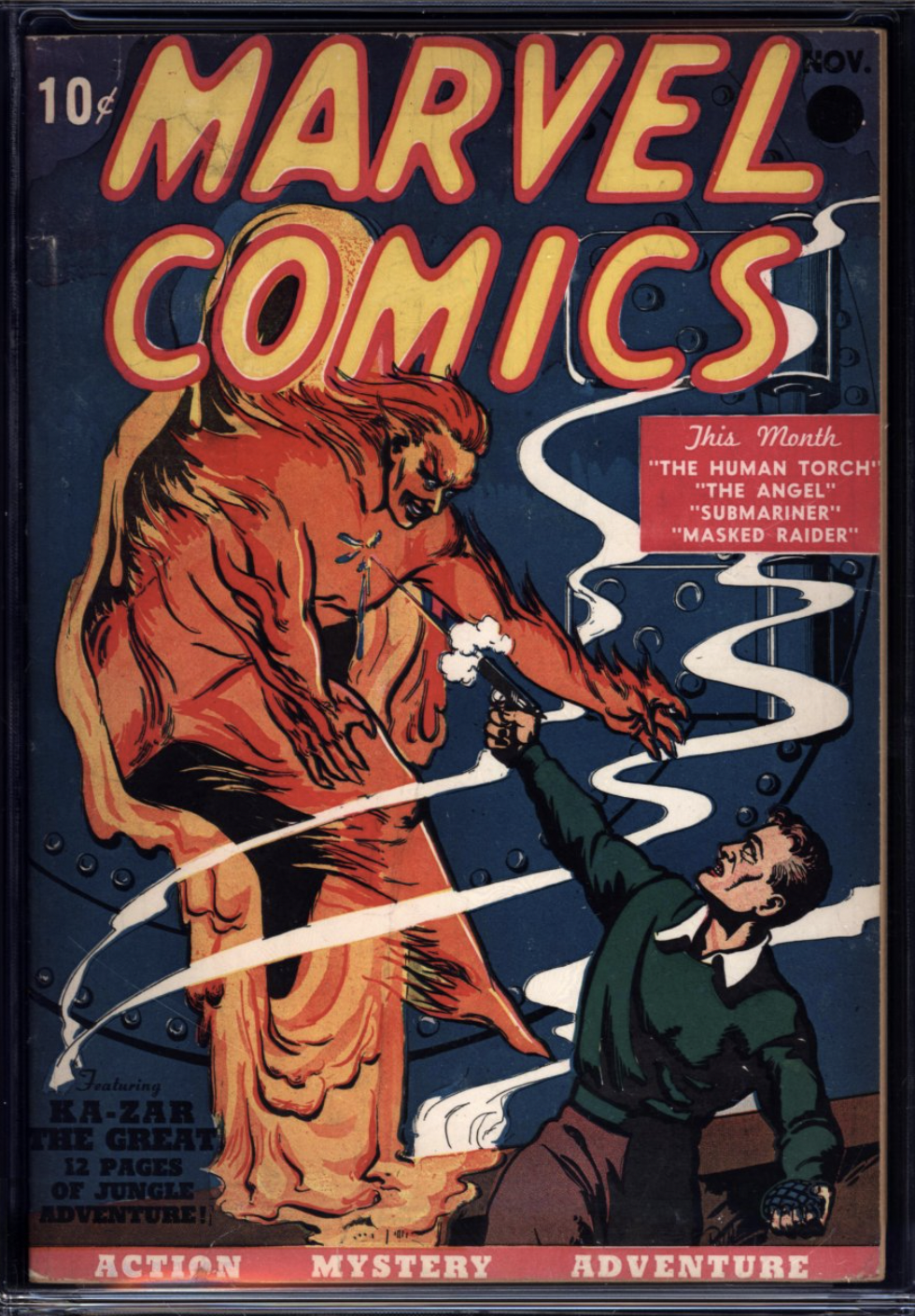 Vincent Zurzolo, chief operating officer of Comic Connect, describes Marvel Comics #1 as “arguably one of the top three comic books in the world of comics collecting.” Considering an issue of this 1939 comic just sold for $2.4 million, it makes it hard to disagree with what Zurzolo says.

There are several reasons why this comic is so valued. The first is the characters who appear. Sub-Mariner and the original Human Torch, later a member of the Fantastic Four, make their comic book debuts. Secondly, this is what’s known in the industry as a “pay copy.” This means that the comic also includes the publisher’s handwritten notes listing the pay of all those involved. These two things are the main reason Marvel Comics #1 sold for such a high amount. 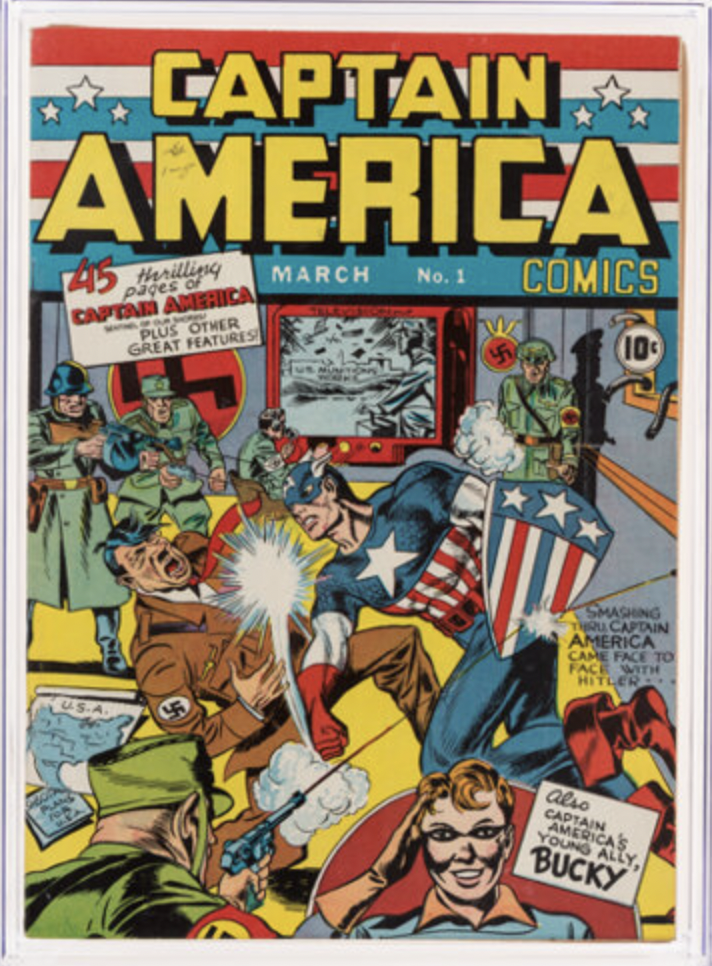 Joe Simon and Jack Kirby are the men responsible for creating this comic. Known for its iconic cover artwork, featuring Captain America punching Adolf Hitler, Captain America Comics No.1 is the beginning of the American hero. As well as Cap, the comic introduces audiences to Bucky, these days better known as the Winter Soldier.

A near-mint copy of this highly prized comic sold in 2022 for an astonishing $3.1 million, making it the third most expensive comic in the world. If you want to make an offer on this bad boy you can, but the current owner is accepting nothing less than a crazy $4.6 million. Better start saving those pennies. 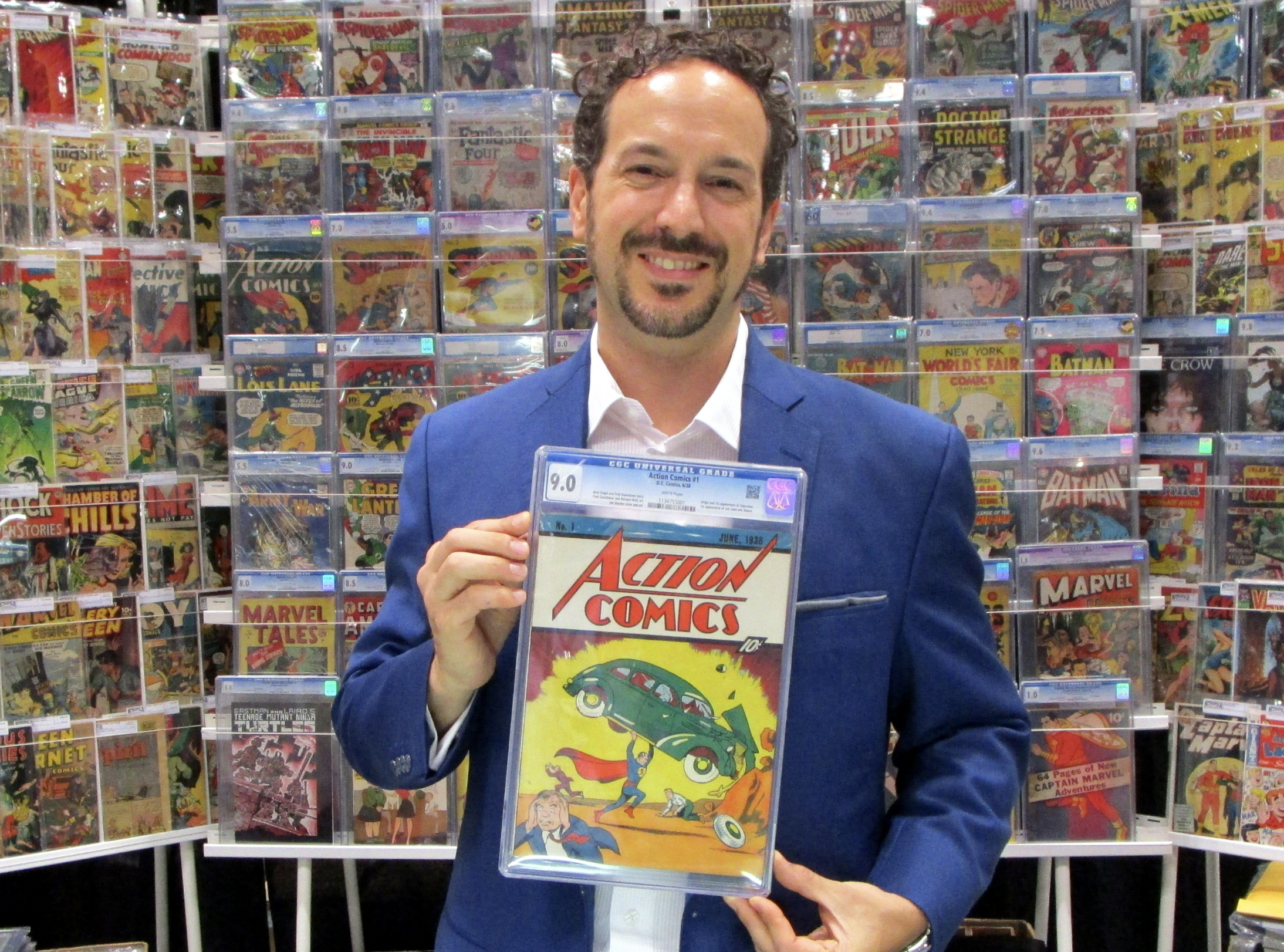 For almost two decades Action Comics #1 has been the most expensive comic book in the world. The comic marked the debut of Superman, one of the great comic book heroes. It was published in 1938 and features the iconic image of the Man of Steel lifting a car on the cover.

Copies of this comic in average condition have sold for between $1 and $2 million, but the most expensive went for a cool $3.25 million in 2021. This copy of the comic was graded at 8.5 by the Certified Guaranty Company, the “world’s leading third-party grading service for comic books, trading cards, magazines, concert posters, and more.”

Before taking out the second spot, a different copy of Action Comics #1 with a grading of 9.0 sold for $3.2 million on eBay and was the previous most expensive comic in the world. Famous Superman fan Nicolas Cage also once had a copy of this rare comic that he ended up having to sell in 2011 for $2.1 million. 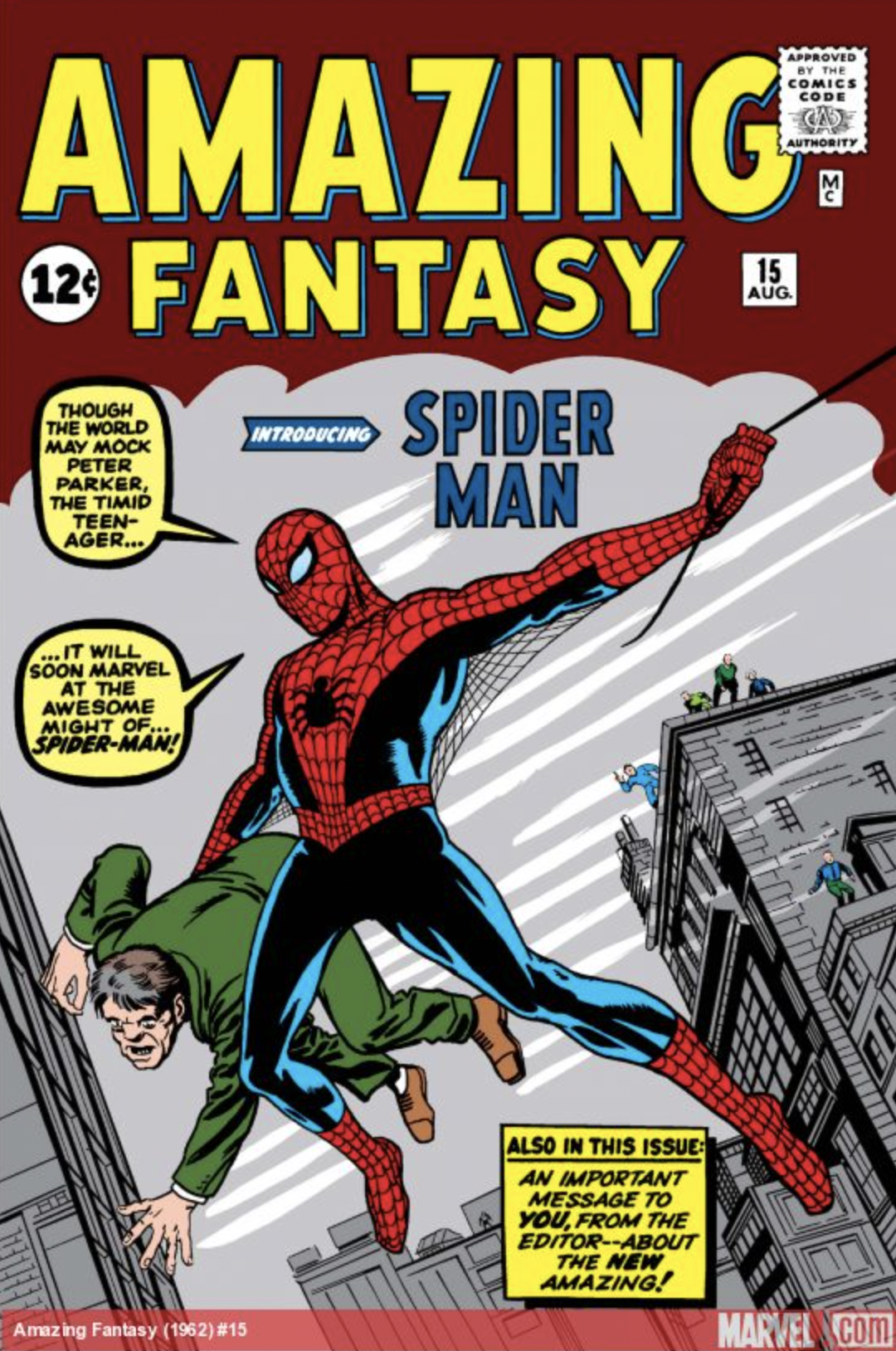 Originally selling for just 12 cents, it’s believed this is one of just four copies still in print. The reason why it is so coveted is that the comic book marks the first appearance of Spider-Man. Written by Marvel founder Stan Lee and drawn by Steve Ditko, Amazing Fantasy No. 15 explores Spider-Man’s origin story and how he was bitten by a radioactive spider. A true collector’s item.