Skip to content
Home » Business Tips » What is known about Ad Astra, the mysterious disruptive school created by Elon Musk where his children study?
Business Tips

What is known about Ad Astra, the mysterious disruptive school created by Elon Musk where his children study?

Genius, millionaire, playboy , philanthropist, Tesla techno-king , emperor of Mars … and promoter of alternative education methods. Elon Musk has criticized America’s educational system on several occasions, but instead of just making complaints, he got down to business. In 2014, the billionaire announced the creation of Ad Astra , a mysterious disruptive school with its own system , in which his children and only a select few study.

The CEO of Tesla loves to show off his ambitious projects, but this time he preferred to keep Ad Astra , which is Latin for ‘towards the stars’, totally secretive. Very little is known about this exclusive school, located at the SpaceX facility in California . So little that only the logo and an email address appeared on their website. That until June 2018, because now not even that.

Elon Musk has seven children in total. With his first wife, Justine Musk , he became parents to Nevada Alexander (2002, died at age 10 weeks), twins Griffin and Xavier (2004), and triplets Damian, Saxon, and Kai (2006). His seventh child is little X AE A-XII Musk , born in May 2020, the result of his relationship with the singer Grimes.

Due to his innovative and eccentric nature, Musk did not want to take his children to a traditional elite school. “I hated going to school when I was little, it was torture,” confessed Musk, who was bullied as a child in South Africa.

So in 2014 he decided to found his own school with his own methodology , supported by a former teacher at the Mirman School for Gifted Children, located in Beverly Hills, Los Angeles, which his children used to attend.

“I created a little school ,” the SpaceX founder said in 2015, in a television interview in Beijing. There he spoke for the first time about Ad Astra and explained that his educational model would be skills-oriented. According to the portal The Hustle , the goals of this hermetic school are:

In this school, Elon Musk explained then, the educational model is based on not qualifying students , but looking for their aptitudes .

“Indeed, there are no qualifications, instead of treating the school as an assembly line, I think it makes more sense to attend to education to match your skills and students’ abilities,” the businessman explained in the same interview in 2015.

“The school currently has 14 children and will increase to 20 in September,” added the businessman at the time, but by 2018 it already had 40 students, according to the BBC .

There the children are not separated by grades according to their age , so the boys from 7 to 14 years old (which is the age range of the students) are taught to work together as a team. 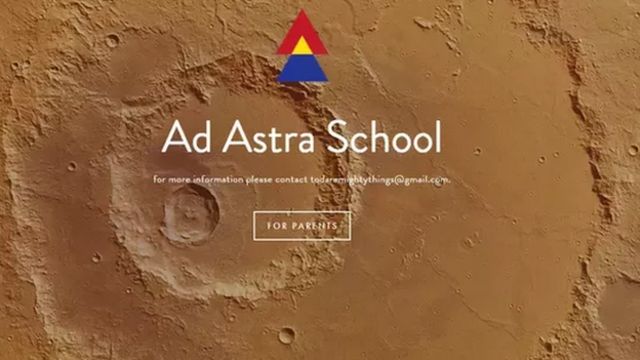 This is how the Ad Astra website looked before 2018, now you only see a gray background with the legend: “This site is currently private. If you are the owner or collaborator, please log in.” : Ad Astra School .

The subjects are also different, because in Ad Astra , students study Artificial Intelligence (AI) , applied science , coding and design of many things, mainly the creation of robots .

The curriculum does not include sports subjects, foreign languages or music . The 50-year-old businessman considers that it is no longer appropriate to teach foreign languages in schools, because today there is real-time translation software. Very debatable for most, but perhaps reasonable for Musk’s children.

“The philosophy of the school is experimental, it is not based on a curriculum. Musk decided that he wanted to educate his children and a small group of children that way. It is something that he developed, it is his idea, it is not a traditional school ,” he said to the BBC Christina Simon, author of the book ‘Beyond the Catalog: A Connoisseur’s Guide to Private Elementary Schools in Los Angeles’.

“It was said at some point that Ad Astra was for the children of SpaceX employees, but it is not clear which workers are being offered the offer, or to how many or under what conditions,” Simon said. “It is not known exactly who these children are ,” he added.

In an informal visit made by BBC Mundo in 2018, which had the condition not to reveal many details of the program, they were able to verify that it does exist, learn a little about its operation and clarify some rumors.

Among the discoveries they were able to reveal is that children do not have to pass an IQ test to be admitted . In reality, potential students visit the school and interact with the staff, who discuss whether the little ones will be able to enjoy and take advantage of the Ad Astra educational model.

For now, children whose parents do not work at SpaceX can request their income by referring someone they know. However, they plan to open the registration process a little more, always with a limited number of places to maintain the disruptive spirit of the campus.

The Los Angeles school specialist commented that she receives many emails from parents who want to enroll their children in Ad Astra and do not know how to do it.

“They are not concerned about what the school is like, how many teachers it has or how it works, information that you normally want to know before choosing your children’s school. Only that it is about Elon Musk,” said Simon.

And what about the university?

As with other alternative systems, such as Montessori or Waldorf, many wonder whether Ad Astra graduates will have enough skills and knowledge to eventually enter university.

Of course, this does not matter one bit to billionaire Elon Musk , who has already made it clear that he does not consider a university education important.

“I think college is basically a place to have fun and show that you can do your homework, but that’s not for learning ,” Musk said in December 2020.

The mogul added that universities are forging students to take on various annoying tasks when they enter the world of work. According to Musk, it is “absurd” for companies to hire personnel based on their academic degree, so it is not a requirement to have a university degree to work at Tesla , SpaceX or any of their companies.

He also pointed out that you can learn any subject online and for free, and gave an example to several billionaires who dropped out of college, such as Bill Gates , Mark Zuckerberg and Steve Jobs , among others.

See Also: From Steve Jobs to Elon Musk, Similar Personality Traits Emerge – How Do Yours Compare?