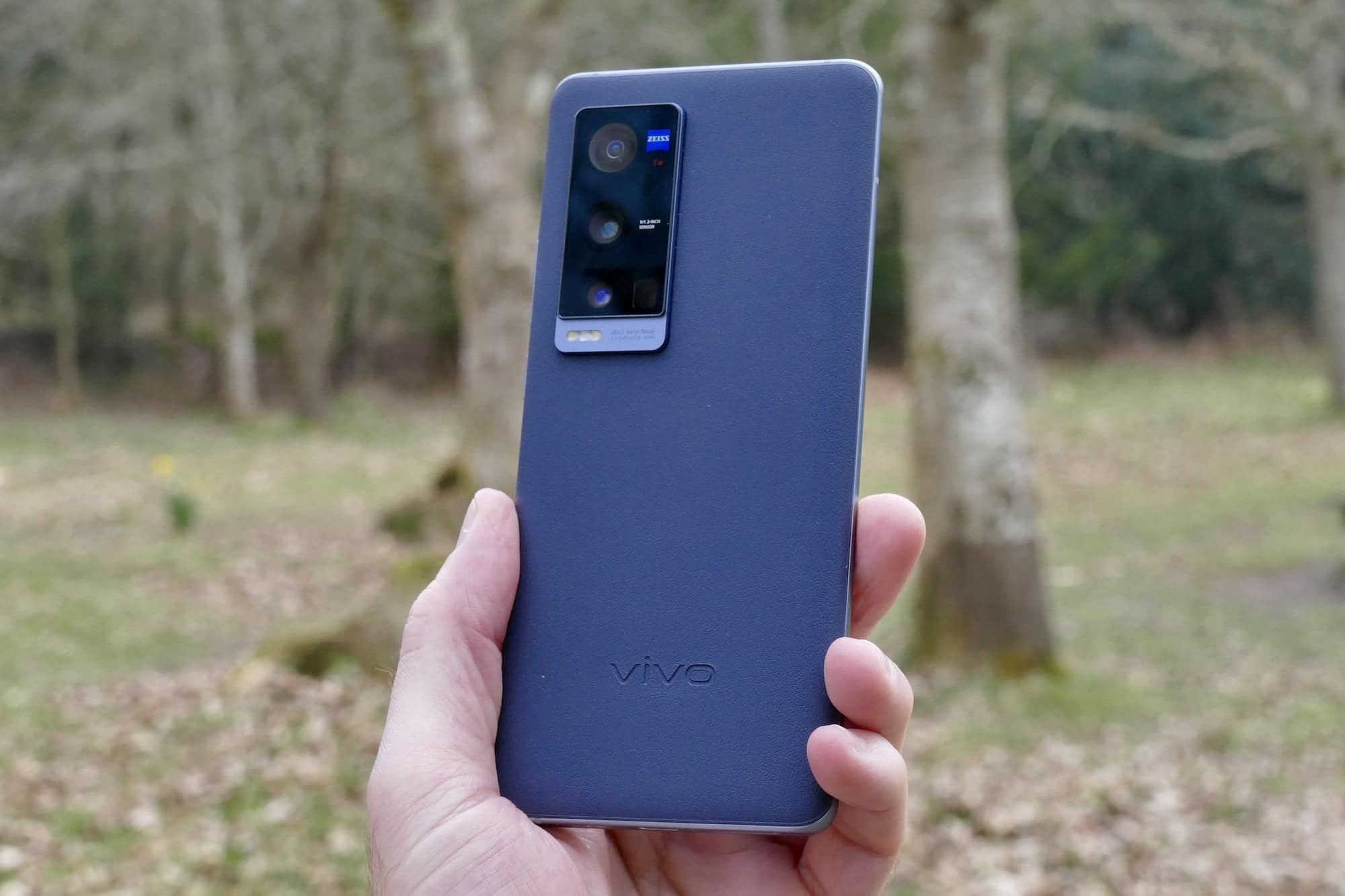 Vivo isn’t a well-known smartphone brand outside of China, but it’s slowly making an impact with some impressive recent releases and crucial software advancements, culminating in the new X60 series. It’s the first Vivo phone to be released with Zeiss, the optics company, which has collaborated with the company on the camera, and it has a unique gimbal stabilization system too.

You may not be that familiar with Vivo, but the X60 series is a big deal not just because of Zeiss’s involvement, but also because it’s part of the brand’s big push into the U.K. and Europe. I’ve been taking a look at the top device in the family, the X60 Pro Plus, and it’s a seriously desirable smartphone.

At this stage, I’ve used the phone enough for an in-depth hands-on, but I still need to fully assess everyday functionality. I’ll update this review in the next few weeks, but for now have given it a preliminary score of 7 out of 10, although this will likely be revised once the review is completed.

The Vivo X60 Pro Plus has a 6.56-inch AMOLED screen on the front and is slightly more compact than the OnePlus 9 Pro and the Oppo Find X3 Pro. Why do I mention these devices specifically? Vivo is part of the BBK Electronics empire, the same as Oppo and OnePlus, and each represents the current top phone from each company. All take on the same foes though, the Samsung Galaxy S21 Ultra, and the iPhone 12 Pro and Pro Max.

It’s reminiscent of the Oppo Find X2 Pro, with a vegan leather rear panel in a subdued blue color called Emperor Blue, and a substantial camera module. The 9.1mm thickness is offset by a low 191-gram weight, and overall the Vivo X60 Pro Plus is a very comfortable phone to hold. It’s not quite as wide as the Samsung Galaxy S21+, but the curved screen means it feels more manageable. It’s very similarly sized to the Galaxy S20+.

The vegan leather is pleasingly different from the endless glass rear panels, but the look and texture are slightly too glossy and are a little too “fake” looking for my taste. It’s grippy and warm to the touch though. I like the textured power button, but have no idea why Vivo decided to inscribe “Professional Photography” on the top of the phone. Apart from cheapening the look, when I see this kind of thing, it automatically makes me think the opposite, and that the phone’s camera is anything but professional.

Vivo hasn’t changed the design much from the X50 Pro, aside from adding the vegan leather, and although the phone is clearly well made, the look hasn’t advanced enough and it appears slightly out-dated compared to the Galaxy S21+, the OnePlus 9 Pro, and the Find X3 Pro.

Despite the X60 Pro Plus being the top phone in Vivo’s new range, the 6.56-inch AMOLED screen has an FHD+ resolution, not a QHD+ resolution. Also, unlike the Find X3 Pro and the OnePlus 9 Pro, the X60 Pro Plus has a central hole-punch selfie camera, but the in-display fingerprint sensor is once more set right at the bottom of the panel. It’s fast and accurate, but can be awkward to locate in this position.

Put it alongside the OnePlus 9 Pro and you do notice the reduced resolution. Watching Carfection’s review of the BMW M4 the 9 Pro is very obviously sharper and has better color and contrast too. It’s extremely close in tone to the Galaxy S21+, which matches its resolution and 120Hz refresh rate, but the Samsung phone’s wonderful contrast and colors shine through.

Given the X60 Pro Plus’s position at the top of the X60 line, a QHD+ resolution would have fitted well with the rest of the high specification. Performance is still good, but its competition has better screens.

Here’s where Vivo has spent the money. The X60 Pro Plus’s camera has more features than it’s possible to test in less than a week, especially with current local movement restrictions. The main camera is a 50-megapixel Samsung ISOCELL GN1 with optical image stabilization, which Vivo also used on the X50 Pro. It’s joined by a 48MP wide-angle camera equipped with a second-generation gimbal stabilization system, with several improvements over the version fitted to the X50 Pro. A 32MP portrait camera and 8MP periscope zoom camera with a 5x optical zoom close out the array.

Zeiss has co-engineered the imaging system which according to Vivo means it has tuned the camera, optimized the images for sharpness and clarity, plus supplied its Zeiss T* coating for the lenses to reduce reflections, and added its Biotar portrait bokeh style to the options available. The lens treatment shows the Zeiss involvement goes one step further than OnePlus’s partnership with Hasselblad, but Zeiss has had years of experience in smartphones, having worked with other brands in the past, most notably Nokia.

The gimbal stabilization is a unique feature and works with both ultrawide stills and video, where it’s also joined by a 5-axis video stabilization system for greater overall stability. It’s very effective, particularly when tracking people or objects at 5x zoom, although it doesn’t make a massive difference when shooting general video compared to a phone with decent optical image stabilization.

It’s just one of a long list of features on the X60 Pro Plus, including the 5x optical and 60x digital zoom, night modes for the standard, ultra-wide camera, and video modes, HDR video recording, various portrait modes, a video mode for capturing sporting moments, a Pro mode, an astrophotography mode, and plenty more. But what about the photos it captures? Colors are strong, there’s a fair degree of saturation, and an overall warm tone. It’s fairly consistent across the main and ultrawide cameras, and the 5x optical zoom is great.

There’s a great deal to test here, but in my short time with the X60 Pro Plus, the camera takes very attractive, and most importantly, extremely shareable photos.

The Qualcomm Snapdragon 888 with 12GB of RAM and 256GB of storage space makes the X60 Pro Plus a powerful smartphone. There’s an unusual feature called Extended RAM, where the system will take up to 3GB of the storage space and use it as RAM when required, resulting in faster app opening, and multitasking.

Android 11 is installed with Vivo’s Funtouch 11.1 user interface, which is far less stylized than you may fear, but still annoyingly intrusive. After set up I’ve agreed to various multi-page privacy notices when opening apps, trying to use the search, or accidentally activating a feature because of the phone’s poor screen edge recognition. No other phone forces me to do this so much. Vivo pre-installs a lot of apps, including Snapchat, Flipkart, Amazon, and its own app store. There are also multiple apps that duplicate Google functionality, and irritating “Hot Apps” folders trying to prompt the installation of games.

A 4,200mAh battery powers the phone, and is recharged using Vivo’s fast-charging 55W FlashCharge system. Assessing the performance, software, and battery takes time, and will be part of the full review update to come soon.

The X60 Pro also has a Snapdragon 870 processor, but only with 12GB of RAM, and the same screen size and resolution too, but now with the same curve as the Pro Plus model. It has a 48MP main camera, this time with the gimbal stabilization system, plus the same 13MP cameras as the X60.

The Vivo X60 series will be sold in the U.K., France, Germany, Italy, and Austria, along with India, Malaysia, Indonesia, and the United Arab Emirates. However, not all regions will get all the phones, or at the same time. The X60 Pro Plus will first arrive in India, for example, and the X60 Pro will be sold in Europe. Vivo has not confirmed the final release date yet.

Prices are also unknown, but based on the prices in China, the X60 Pro converts over to around $690, or 500 British pounds, and the X60 Pro Plus to around $920, or 670 British pounds. If Vivo can match these prices, it’ll take the fight directly to Xiaomi and the Mi 11, which also undercuts the price of Samsung’s Galaxy S21+ and the iPhone 12.

At this stage, the Vivo X60 Pro Plus has everything I’ve come to expect from a Vivo phone — an insanely feature-packed camera, and irritating software. The hardware itself is well made, but the design is smartphone-circa-2020 and doesn’t move anything forward. It would normally be easier to forgive some of these issues if the price came in at around $900 or less, but the competition this year has made it much harder for Vivo to get away with a less-than-ideal software experience in particular. I’ll continue using the Vivo X60 Pro Plus, and have a full review soon.