Torras Coolify Review: Have you ever overheated after an outdoor run, or had your room fan break down during the hottest month of the year, and think to yourself, “Man, if only I could just point an AC right at my face?”

Trying to create the best portable air conditioner over the years has been no easy feat, with brands investing in formulating wearable solutions for rising body temps, in place of simply shrinking down the traditional AC unit (although I’ve found this mini AC model to be both sleek and effective).

Full disclosure: I’m heavily invested in finding the best ways to cool down fast, partially because I’m prone to heat flashes, and also because my work-from-home office seems to always seems to be the hottest room in the house. During heat waves, even like checking emails and cooking over a stovetop can feel like a sweat-filled annoyance at best, and a oppressive at worst. Enter: the Torras Coolify.

The Coolify is a sci-fi-looking portable cooling fan that sits around your neck and shoulders, and while it may look unassuming at first (or totally obnoxious depending on your point of view), the neck fan actually gave me targeted relief whenever I needed it, whenever I need it. 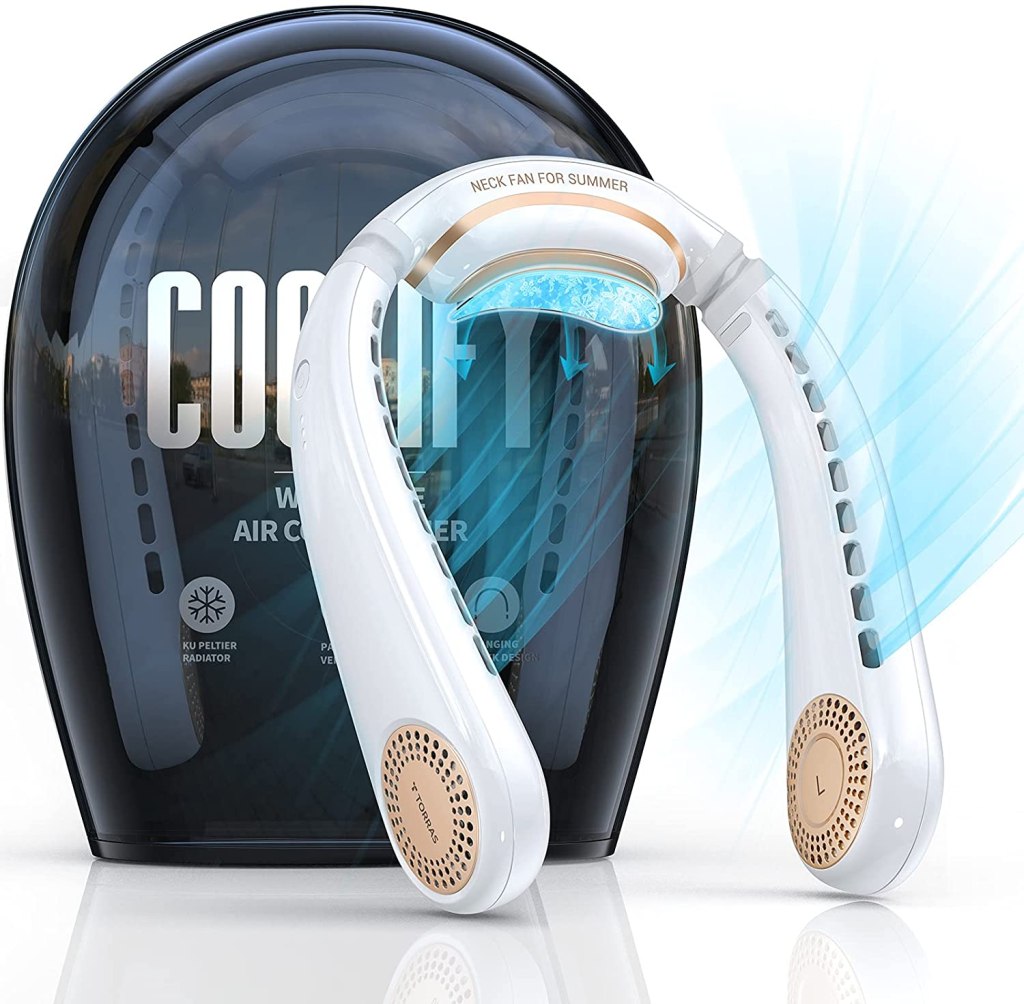 Unlike other generic bladeless neck fans you can find on Amazon, the secret to Torras’ gadget success is its technology behind the ceramic cooling plate that sits right at the back of your neck. Using electrical current run between the semiconductor (known as a Ku Peltier radiator) and the plate, the Coolify creates, well, a soothing, cooling sensation that you can feel pretty instantaneously.

That in and of itself would make it a vast improvement over simply blowing around hot air at your neck like other fans. But the Coolify doesn’t stop with its high-end radiator—it’s designed with 36 air vents that blow air directly up to keep your face cool, and downwards to stop any excessive neck sweating. The 360-degree “3D” airflow is backed by a 5,000 RPM high-speed motor to produce 3 times the wind volume. Bottom line: it’ll blow cooling air faster to the targeted areas you need the most.

In my experience, portable air conditioners are usually far more worth it than a noisy fan or an open window that doesn’t circulate air, but bulkier models can take up precious floor space. The Coolify is gratefully not as bulky as similarly-designed wearable neck fans, is a lightweight 12.3 ounces. While I personally have not tried to wear it working out, the silicone joints on the gadget help it bend to stay securely placed around your neck (although I wouldn’t recommend it for anything that involves a lot of jumping). 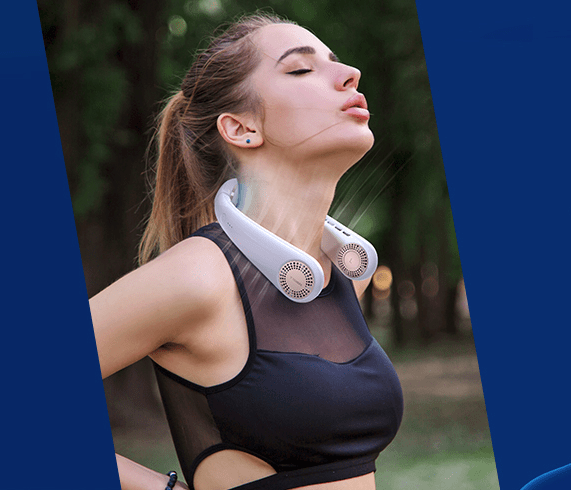 How Does the Torras Coolify Work?

Coolify maximizes the efficiency of its cooling plate element by using three energy-saving fan intensities, labeled light breeze, mild wind, and cool wind. The device has a 4000 mAh rechargeable battery which lets you spin those fans for up to eight hours, or about the average length of a workday (although this depends on the speed you choose). It has a USB-C charging port that only requires 2.5 hours of juice for a full charge— just plug it in during the morning, and you’re ready for a personal AC for your afternoon run, or to power through your workday.

It’s functionality is super streamlined, with just one button that you tap to switch fan speeds, and the same one you can hold down for 1.5 seconds to activate the cooling plate. The design looks like it could easily land this gadget on Shark Tank, and admittedly, it is a bit nerdy-looking. I’m not sure that I would wear it outside of the comfort of my home office, but I will say that it’s no dorkier-looking than wearing a pair of over-the-ear headphones around your neck (which for this job, I do a lot).

One drawback was that the cooling plate isn’t actually safe to use for long periods of time, so the Coolify automatically shuts the radiator off after 30 minutes (though the fans will continue to spin for hours). Since this is the crux of what makes it comparable to an air conditioner, I understood the hardware concern, but was disappointed that I couldn’t squeeze more chill out of it in a single session. The fans still work fine, though having them blow up into my ears, especially on the highest setting, was a bit of a weird sensation, and not one that’s very “whisper-quiet.”

Is the Coolify an Air Conditioner Replacement?

Speaking of cooling, the brand talks a big game about the effects of the ceramic plate, claiming that it can lower your body temperature by up to 18 F degrees. Listen, it still gives a surprisingly powerful chill for its size, but this gadget is more for when you need to make a hot living room bearable to hang out in with friends (and not necessarily for, say, bringing down a fever).

It’s nothing like a cold blast from your car’s AC, or the frigid low temps of a central air conditioner, but it gets the job done. For me, it felt like just slightly cooler than the room temperature air around my office, which is honestly just the boost I needed to break through the heat of my home office and chill out (literally). It’s a personal cool haven I can turn too when ever I feel my brain start to fry from overheating, and even just on the fan settings, it can last all day

Torras Coolify Review: Is the Portable Air Conditioner Worth It?

The bottom line: The Coolify is one of the best portable air conditioners you can use to give you quick relief from the heat, period. As long as you’re aware of its limits, the Coolify checks all of my boxes, with powerful fans and a deep enough chill to give me at least 30 minutes of that aaaaah feeling. The price tag might seem excessive at $150, and the device looks a little silly when you wear it around other people—but the upside is that I’m you’re not running up your electric bill to cool down an entire room (or an entire house), and that’s the benefit of a wearable, targeted fan. Pop an AC unit into your window if you want a deeper chill, but for now, you can pry my Coolify out of my cooled-down hands.

Secret Couple Who Got Caught Red Handed By Paparazzi