The Weather, Places To Visit And More

Visiting Japan in October can be one of the most beautiful and fulfilling experiences of your life. The onset of autumn coats the country in fiery reds, oranges and golds. Japan’s weather in October is moderate and pleasant which helps you to enjoy the beauty around you comfortably. Add to this, the various traditional festivals, cheaper travel options and a number of tourist attractions in cities like Tokyo, Hokkaido, and Kyoto. The festivals are scattered across the country that make visiting Japan in October a worthwhile endeavour to look forward to. This comprehensive guide will give you all the information you need to visit Japan in October.

October is one of the most pleasant months to visit Japan. As the typhoon season ends, the weather in Japan in October is moderate (neither hot nor humid) and comfortable. Average daytime temperature in October hovers around 15 °C. Chances of rain drastically reduce and the hot and humid summer days of September give way to a warm and fuzzy October.

Why You Should Visit Japan In October 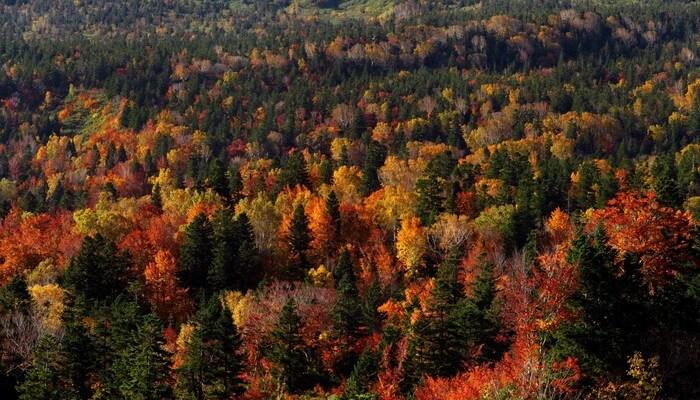 Image
Trees just begin to turn colours in the higher elevations and you can see the gradual changing of colours as you travel from north to south in the month of October. Compared to Sakura season also known as “cherry blossom” season, there are fewer crowds. As a result, airfare and accommodation is cheaper to attract more tourists. Japan also has an extensive railway network and buying a Japan Rail Pass ticket will give you access to unlimited rail travel for a certain period.
Also, there are various things you can witness in Japan in October as listed below:

Must Read: 7 Japan Hill Stations That Are More Than Just Picturesque Landscapes

Traditional Festivals In Japan In October

The month of October is one of the most fun months to be in Japan. Check out these awesome traditional festivals which you can be a part of while visiting Japan in October. 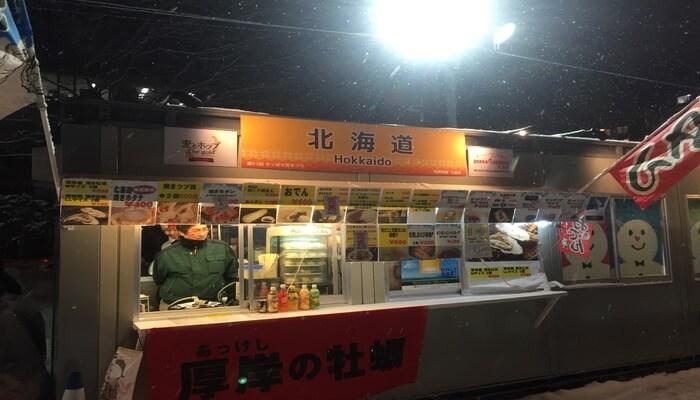 Image
Autumn in Japan ushers in the season to celebrate the new harvest and locals call it “Autumn’s Appetite”, to celebrate and try out the different kinds of seasonal food and ingredients. A number of food events are held in October, and one of the biggest is the Hokkaido Food Festival. This is an outdoor food event held in the first week of October for 4 days in Yoyogi Park, Tokyo. It features around 100 vendors and over 400 delicacies from Hokkaido. Here, you can find a lavish spread, from seafood to regional Ramen.

Suggested Read: Japan’s Godzilla Theme Park To Open Soon In 2020 And It Doesn’t Get Better Than This! 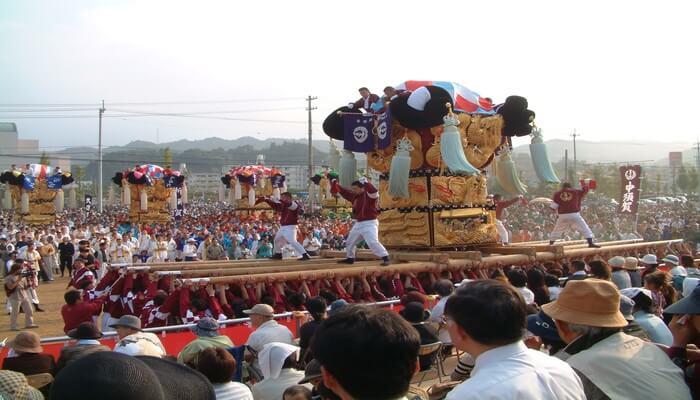 Image
The Niihama Taiko festival is held in mid-October on Shikoku Island. It consists of 47 floats which are shaped like giant taiko drums. Various teams from the local neighbourhood, consisting of 150 men bounce the 2 ton floats wildly in the area to show their team spirit. This festival is attended by around 250,000 spectators who gather around these teams and support and egg them on as the float teams try to knock over the opposite team’s floats by charging and ramming into them.

Suggested Read: Snorkeling In Japan: 13 Best Spots For Experiencing This Water Adventure In The Japanese Waters In 2020! 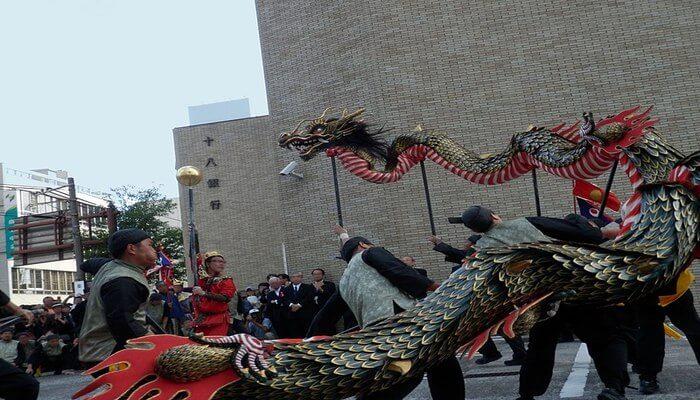 Image
Held in the city of Nagasaki, this festival dates back to 1634. The event is heavily influenced by European and Chinese culture. The entire city of Nagasaki takes part in this festival with around 60 teams representing the various city districts. These teams perform a unique dance on a rotating schedule of 7 years, so it remains fresh to even the regular viewer. If you wish to attend this festival, you need to buy tickets months in advance as they sell out several weeks before the event begins. Some performances are staged at various locations across the city and you can watch them freely as they don’t require tickets.

Suggested Read: 8 Places To Visit In Tokyo In Summer That Should Be On Your Japan Itinerary For 2020

5 Places To Visit In Japan in October

If you are wondering about the places to visit in Japan in October, then worry not. Here is a list of top 5 places to visit that should definitely be a part of your itinerary. 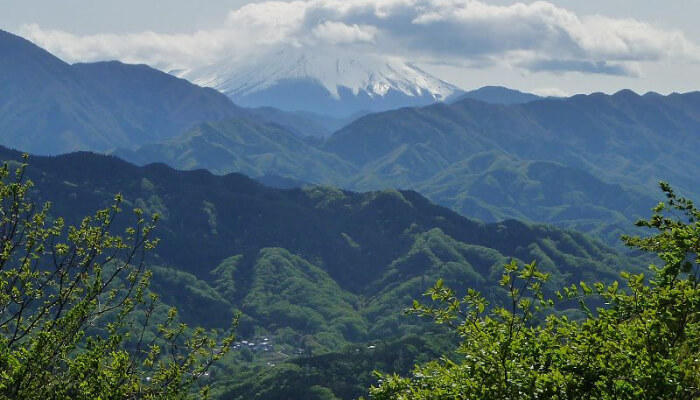 Image
If you’re visiting Japan in October, then you must include Mt Takao in your itinerary. Mt Takao is about an hour’s train journey away from the Tokyo metropolis. As you leave the busy skyline of the city and make your way into the hilly landscape, you are welcomed by the most breathtaking sight of the maple-covered sierra. Mt Takao is host to its very own Mt Takao Autumn Leaves Festival. It plays host to events like Taiko drum shows, workshops and parades. Other attractions include gorgeous hiking trails and a number of food joints to satisfy your appetite. 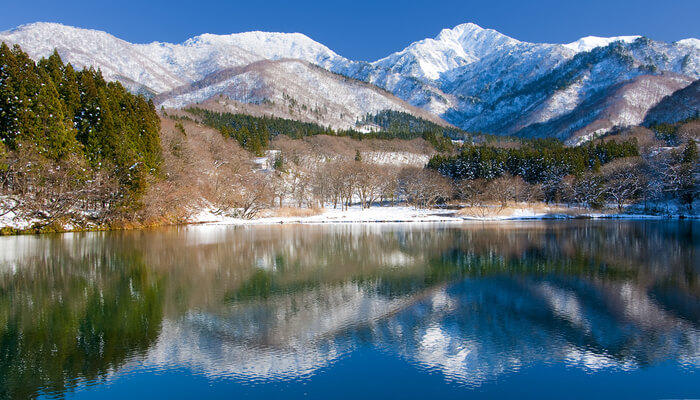 One of the top places to visit in Japan in October is Lake Daigenta which is situated near the Yuzawa Ski Park. Here, you can see the colourful autumn leaves get reflected on its pristine surface. You can also circle the lake in a suspension bridge that surrounds it. Other options to explore the area include hiking or getting a rowboat, if that’s what floats your boat. There are various campsites available around the area to soak in the beauty. By the end of it, you’ll find it tough to tear yourself away from the landscape.

Suggested Read: Top 10 Osaka Museums That Are All About History, Wars & Cultures Of Japan!

Planning your holiday but confused about where to go? These travel stories help you find your best trip ever! 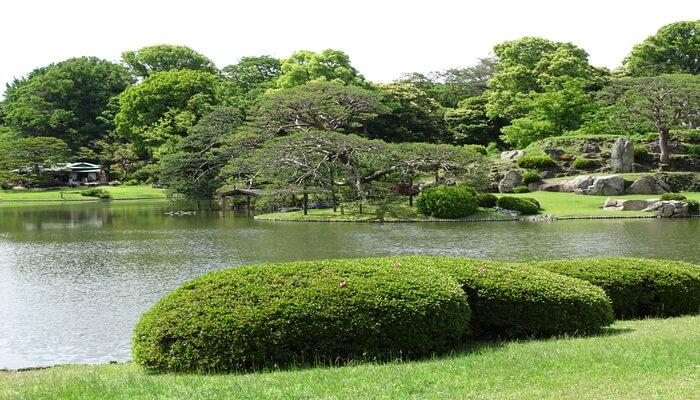 Image
Located in the heart of Tokyo is Rikugien Garden. It’s a popular destination throughout the year but if you’re visiting Japan in October, this park is at its peak during the autumn season. It will take you an easy couple of hours to explore this Tokugawa Shogun era garden by foot. Landscaped in an Edo-Period strolling garden style, it’s densely populated with maple trees that transform from green to shades of red and orange during autumn. Make sure to include this Garden in your plans when you visit. 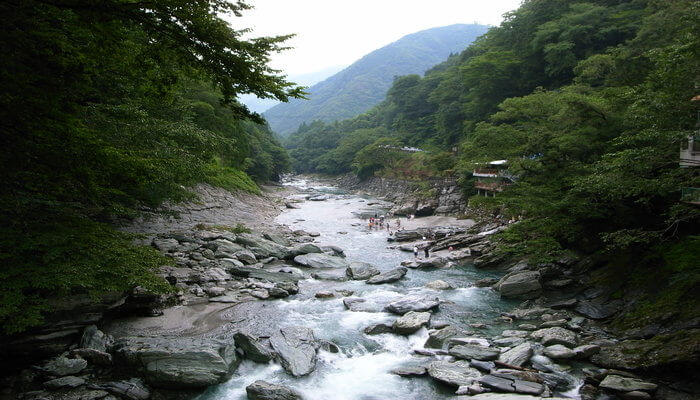 Image
For the more adventurous traveller, another secret autumn hotspot to visit in Japan in October is the Iya Valley located on the island of Shikoku in the Tokushima province. It’s not the easiest spot to reach, but the journey is well worth it. Tucked between towering mountains and rocky gorges, the Iya Valley area is at its most vivid as October rolls into early November. You can cross the twisty vine bridges that hang in this remote valley as you make your way to Mt Tsurugi for those unbe-leaf-able views.

Suggested Read: Solo Travel In Japan: 10 Tips To Remember Before You Pack Your Bags 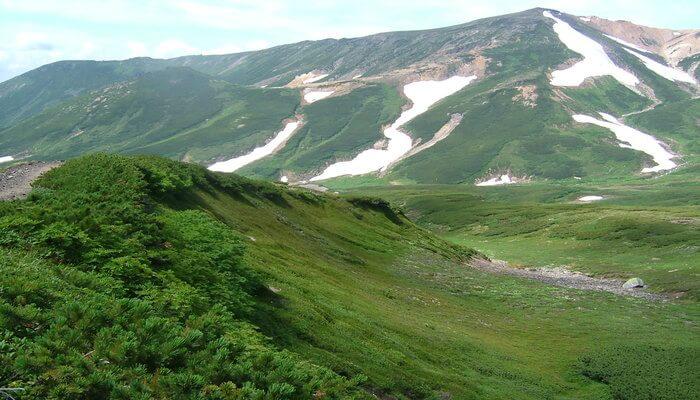 Image
One must-visit to add to your Japan itinerary is the Daisetsuzan National Park located in Hokkaido, the second largest main island of Japan. This national park is Hokkaido’s largest and one of the most beautiful in the country. Typically, this area hits its peak in early October. The park is so huge that the most effective way to explore it is if you join a ropeway tour. You can also visit the Asahidake Onsen, a hot spring resort that sits at the foot of Hokkaido’s highest peak, Mt Asahidake.

Suggested Read: 8 Japanese Desserts That Will Get You Swooning!

5 Things To Do In Japan In October

There is no end to the crazy things which you can indulge in while visiting Japan in October. We have picked some of the best things to do to make your vacation memorable. 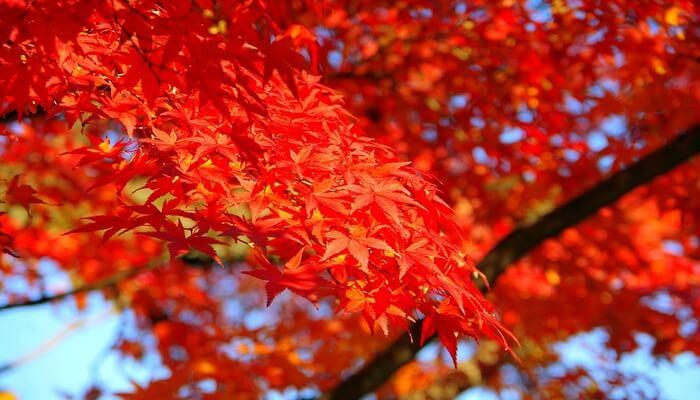 Image
For anyone travelling to Japan in October, witnessing the spectacular autumn leaves must be at the top of their list of things to do. Autumn leaves peak in October in the northern regions of Tohuku and the main island of Hokkaido. Some of the other spots for viewing autumn leaves are Nikko, Nagano, Tokyo and Kyoto. You can take a Golden Route itinerary in early October to see a change in the autumn tint as you travel from north towards the south of the island. 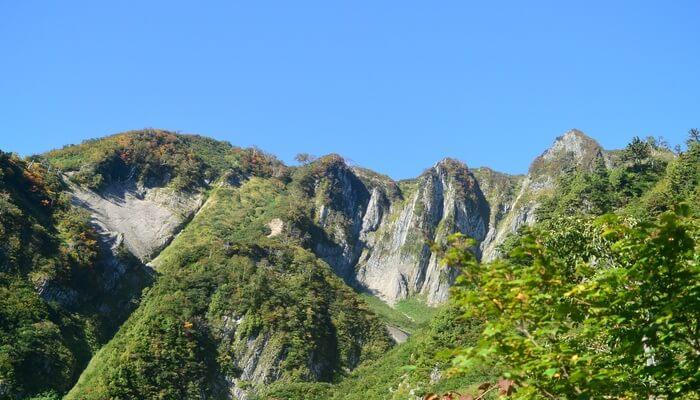 Image
For the more adventurous souls, October is considered to be the best time of the year for outdoor activities. The weather during this time is moderate, and especially on the mountains, it’s the best time to see autumn leaves since most of them are closed down for public from November. There are various hiking spots around Tokyo for visitors to enjoy on a day-trip. Some of the best hiking spots around Tokyo include Kamikochi, Mt Oyama and Mt Takao-which is the closest nature from Central Tokyo.

Suggested Read: Japan In January: Take A Trip To This Winter Wonderland In 2020 For A Snowy Vacay!

3. Visit The Temples Of Nara 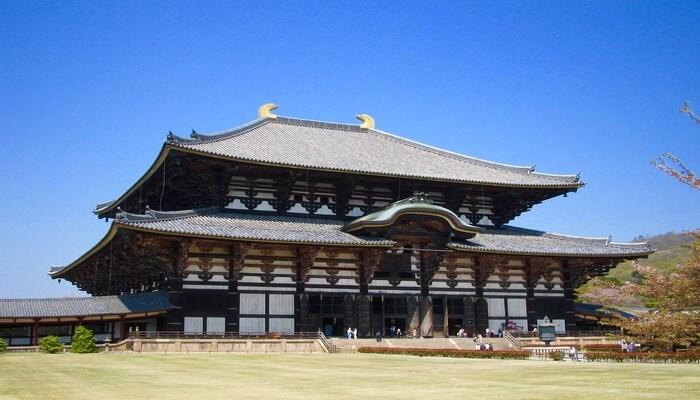 4. Walk Back In Time In Kanazawa 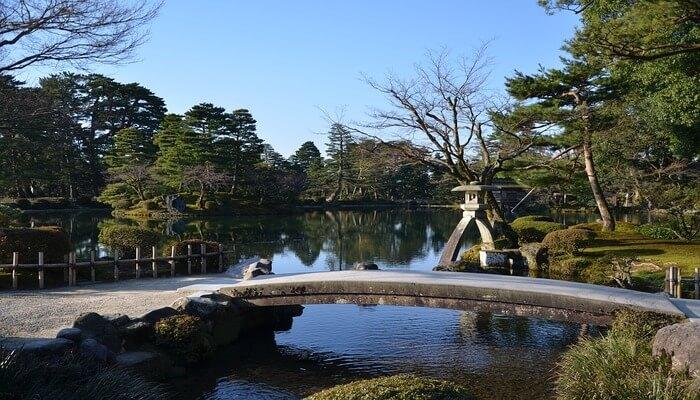 Image
Unlike other cities, Kanazawa has been preserved since the Edo period. Here, you can explore old neighbourhoods, ninja temples and the Kanazawa Castle against the fiery backdrop of red Japanese maples.

Suggested Read: 7 Japanese Temples: Marvel At The Architectural Beauty Of These Ancient Buildings 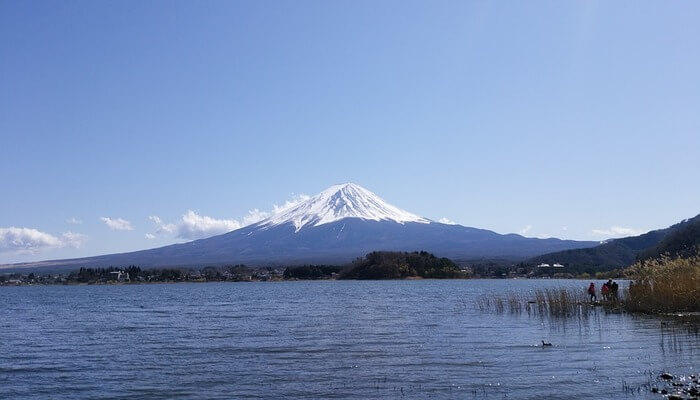 Image
The sacred Mount Fuji and its surrounding lakes are perfectly enveloped in fall foliage in October. The Fuji Five Lakes area has a number of attractions like onsen resorts, the Fuji Q Highland amusement park and a number of museums making it a must visit destination to explore.

Further Read: 15 Airports In Japan For A Safe Touchdown In The Land Of The Rising Sun!

So, there you have the things and activities that line up for you in Japan In October. Plan a beautiful trip to Japan today and get ready to experience all of the above. And since its fall, the pleasant weather is going to impress you thoroughly. While you are on it, do share your lovely experience to this beautiful country with us.

Q. Is October a good time to visit Japan?

A. October is one of the best times to visit Japan for several reasons. The weather is pleasant during this time and compared to Sakura season, there are fewer crowds, the result of which airfare and accomodation is cheaper.

Q. How many days are enough for Japan?

A. 7 to 10 days is an ideal time to spend in Japan. You can easily cover all the sightseeing places in the stipulated time.

Q. Is Japan safe for tourists?

A. Japan is an absolutely safe country for tourists. Although some areas are best to avoid late at night.

Q. What can I wear in Japan in October?

A. It is advised to wear lightweight tops/t shirts during the daytime. However, at night it gets a little colder so don’t forget to pack warm clothes.

Q. What is Japan famous for?

A. Japan is famous for its traditional arts, calligraphy. The country is also home to more than a dozen UNESCO World Heritage Sites.

A graduate of Political Science, Gyana likes to explore by interacting with people and learning about their culture and traditions. He likes to eat, go places and talk about movies. A big fan of people and their pioneering spirit and an avid movie watcher, he is fascinated with world of imagination. He constantly seeks to grow and yearns to improvise with innovation that eventually provides solutions to problems.