The joyful noises of dancing, acting, and music-making can usually be found within the hallways of the Juilliard School. But this week, many of those gifted student artists are taking to the streets as part of ongoing protests — including the prestigious conservatory’s first sit-in in recent memory — over pandemic tuition hikes for the upcoming academic year.

On Thursday (June 10th), across the street from where the pianist and Juilliard professor Emmanuel Ax and graduating students performed outdoors as part of Lincoln Center’s Restart Stages initiative, student protestors in front of the main Irene Diamond building were in their fourth hour of that day’s demonstrations over a tuition increase of $1,970. The wave of protests and occupancy over the past week, first reported by the blog Park Avenue Pianos, has been organized by members of The Socialist Penguins, a student group, created in 2021, that is “working to build collective power and radical consciousness” for arts workers at Juilliard and beyond. With a full-time student body of around 840, and fewer who are on campus on account of the pandemic, even efforts by a few students can create waves. “The good thing is that when our students are upset, they are upset,” Sarah Ma, a first-year violinist and a founder of The Socialist Penguins, tells Rolling Stone. “Because we’re all artists, our passion is channeled through something. When there’s eight upset musicians, there’s going to be a lot of upset music at the school.”

Since Monday, demonstrators spanning the school’s three divisions of dance, drama, and music have gathered outside to play jazz, sing protest songs, dance, and chalk; despite the heat, one dancer mustered the energy to unfurl a mid-air split. Within the building, students have tabled, posted signs, and picketed in the face of pending disciplinary investigations. They assert that the raise will leave many — including the quarter of Juilliard students from households making under $30,000 a year — in the lurch. “[Two thousand dollars] is the difference between being able to get sufficient groceries for two months,” Ma says, adding that, along with other students, she contends with food and housing insecurity in spite of her funding package. “It’s the difference between being able to commute for a year.”

In a period that has ravaged the performing arts and exacerbated hardships of paying to live in New York City, students say that that the school’s proposed tuition increase of $1,890, for an annual cost of $51,230, especially in light of tuition freezes at sister schools, is untenable. The dissonance between the school’s pristine branding as of late and its response to the student outcry has encouraged a level of protest that students and alumni said feels unprecedented within the history of the school, and, as far as they know, at conservatories across the country.

Juilliard’s history of such organizing is sparse. In 1940, 80 students organized against the dismissal of Howard Langford, a professor in Juilliard’s academic department, over issues of salary and tenure. Thirty years later, when then-president Peter Mennin announced that the school was considering eliminating the dance division for lack of funding, a surge of activism organized by the division’s founder, the dancer and educator Martha Hill, kept the program on the books; the school went on to name a prize after Hill. More recently, after a 2019 effort by the group Juilliard Students for a Fair Wage, the school announced that it would meet the city’s minimum of $15 from $9 in the fall of 2021.

Protestors and their allies argue that a sea change in Juilliard’s receptivity towards economic and political change is long overdue, and that the school’s response after their occupation has been far from satisfactory. (Juilliard did not immediately respond to Rolling Stone‘s request for comment.) Photos and footage of the demonstrations illustrate how, over the mournful sounds of a nearby practicing trombonist, students first brought concerns to Juilliard president Damien Woetzel and other administration members, and on the following Wednesday picketed the administrative office on the second floor. At that picket, students described confusion over a perceived attempt by school security to lock the doors on them. “Our experience of the door not opening, coinciding with them not giving any information about what they were doing, was enough to make me feel very uncomfortable,” said Carl Hallberg, a first-year drama student and member of the Penguins. 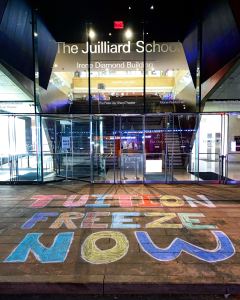 At least fifteen of those identified picketing later received notice that their access to the Diamond building had been revoked while the school investigated “possible violations” of the code of conduct, including a report that an employee had been made to feel unsafe.  Anger, shock, and fear took hold as students scrambled to email teachers about missing end-of-year rehearsals and classes. For conservatory students, losing building access can mean not only academic repercussions but also the loss of access to instruments, practice spaces, and critical supplies. “I have friends who need to make reeds and can’t go into the building,” Ma says. Students, who say they were unaware of previous instances where the school revoked building access due to disciplinary matters, recount the pressure of last-minute locker cleanouts and, for students who don’t have air conditioners at home, a day of practicing through stifling heat.

All students interviewed mentioned that the idea of the “artist as citizen” — the school’s oft-touted notion, coined by former Juilliard president Joseph Polisi, illustrating the relationship between artmaking and social consciousness — has come to seem ironic amidst the protests. “That phrase, as it’s been taught to us, means that we have to be engaged in our art as citizens,” says Jacob Melsha, a fourth-year jazz trombone student in the five-year BA/MM program and a Penguins member. “It’s funny to me that, the moment we do that on school property, we are being condemned.”

Though the Penguins report that analogous organizing efforts are few and far between within the culture at most conservatories, students and alumni of schools across the country have indicated their support for the Penguins both publicly and privately. For students at Berklee College of Music, who began their own chapter of the national food justice organization Uprooted & Rising in August of last year, the Juilliard protests are a harbinger of changing attitudes towards organizing among conservatory students. “Musical culture and artistry has such a political history, but when you enter into these schools, [it’s] almost entirely removed—you’re taught music in a vacuum,” says Omisha Chaitanya, a junior majoring in electronic production and design (EPD) and member of the Berklee organization. The radicalizing at Juilliard, Chaitanya said, “is a huge shift in the narrative of what we tolerate and what we don’t.”

Some students expressed frustration with the school’s response to the pandemic as a whole. Ryan Jung, a first-year master’s student in piano performance and a member of The Socialist Penguins, says that the school’s branding over the past year has failed to sufficiently acknowledge the concessions students have had to make in order to make art during Covid — whether bags over wind instruments that forced adjustments in sound production or masks for actors that limited their range of expression. “We’re grateful for the opportunity to be able to do that more in person now, but with all of that comes a lot of extra effort that we have to put in as artists to overcome that hurdle,” Jung says. “What was really so shocking to us is how little of that was shown to the public.”

Ronen Segev, a pianist and president of the store Park Avenue Pianos who founded Juilliard’s student council as a student in 1999, recalls the council’s fear at the thought that the administration, however well-intentioned, would target them for speaking out. Segev, who as an alum aided efforts to preserve Juillard’s Music Advancement Program (MAP), a Saturday youth program for minority musicians from low-income backgrounds, says that in a year of emotional and financial trauma, the protestors’ bravery stands out. “There’s something simmering in their bones,” he says. “To see these young students who are full of passion, and who are fearless and determined and want to have their voices heard in a similar way to what we were doing — it’s inspiring. Although I can see things from the other side as well, I’m rooting for them.”

The protests over the tuition hike attest to tensions in the culture sector, heightened by the pandemic and expanding consciousness of racial injustice, that go far beyond Juilliard — starting with an institution next door. At the Metropolitan Opera, whose building now presides over what amounts to an Astroturf welcome mat on Lincoln Center’s main plaza for summer audiences, musicians and staff, a number of whom are Juilliard professors, remain in embattled talks with management over salary cuts. “As young musicians, many of us are seeing our teachers and mentors struggling for fair compensation,” says Lee Cyphers, a horn major who graduated from Juilliard in 2020 and co-founded the student fight for a $15 minimum wage, such that the struggle between artists of all stripes has come to seem united.

After a year of being siloed in their respective divisions on account of pandemic protocols, Penguin members said that students from every discipline and year have found community and solidarity in the protests. “These past few days have really been extremely liberating for myself and a lot of my friends,” Ma says. “We were able to learn from each other in a way we weren’t in the classroom.” Regardless of the outcome of the protests, she adds, she and her peers are proud of the work they have done: “It will prove to students that they can rally for things that they need and want.

Rosebud Baker’s Granddad Is a Conservative Icon. Her Comedy Is Liberal