The Longest Lasting Laptops In 2021: All Day Battery, Mac, PC

Although laptops have gotten smaller, the components inside have become more energy-efficient, and the software they run has been optimized to preserve power. These breakthroughs, combined with recent advancements in battery technology, allow laptops to run longer than ever.

Most of us rely on a laptop to get our work done, and few things are as frustrating as fumbling for a power cable in the middle of a project or conference call. If your current laptop’s battery constantly conks out, we’ve got the solution.

The laptops in this guide can last up to 18 hours on a single charge, which is closer to true “all day” battery life than ever before. We use the term “up to” because the amount of time these laptops will actually last depends on the work you do.

Re-intensive work like photo and video editing will eat a lot more power than writing and editing documents. System settings like your display’s brightness will also make a big impact on the longevity of its battery.

If you’ve been using an older laptop that’s started to flake out or needs to be plugged in all the time, the machines below will be a significant upgrade.

What Are the Longest Lasting Laptops?

There are many factors to consider when choosing the longest-lasting laptop; below are the most important ones, which we considered while we were researching this list.

Operating System: The laptops in this guide run either Windows, macOS, or ChromeOS. Each system has full access to a desktop-class web browser and can run popular software like Microsoft Office.

Screen Size: The laptops we’re recommending have screens between 13 and 15 inches wide. Larger screens are better if you work with a lot of media, but they’re bulkier and heavier. We recommend getting a smaller laptop and hooking it up to a big external display for the best of both worlds.

Screen Resolution: A laptop’s screen resolution will determine how sharp text, photos, and videos look. Every laptop below has an HD screen, but some of our picks edge closer to 4K.

Processor: All of the machines below run on a new, power-efficient chip designed by either Intel or Apple. They’re fast enough to run multiple apps at once.

RAM: The laptops we’re recommending have between 4GB (Gigabytes) or 16GB of RAM (memory). Computers with more RAM can run more apps simultaneously without slowing down.

Storage: We’re recommending laptops with between 64GB and 512GB of storage. The amount you’ll need depends on whether you store most of your files in the cloud, or prefer to keep them on your computer.

Inputs: A computer’s inputs (known more commonly as ports) allow you to connect accessories to your machine. Each one of our long-lasting laptop picks has a different assortment of ports, which you should strongly consider before making a choice. All of them support WiFi and Bluetooth, though, so you have a range of wireless connectivity options, too. 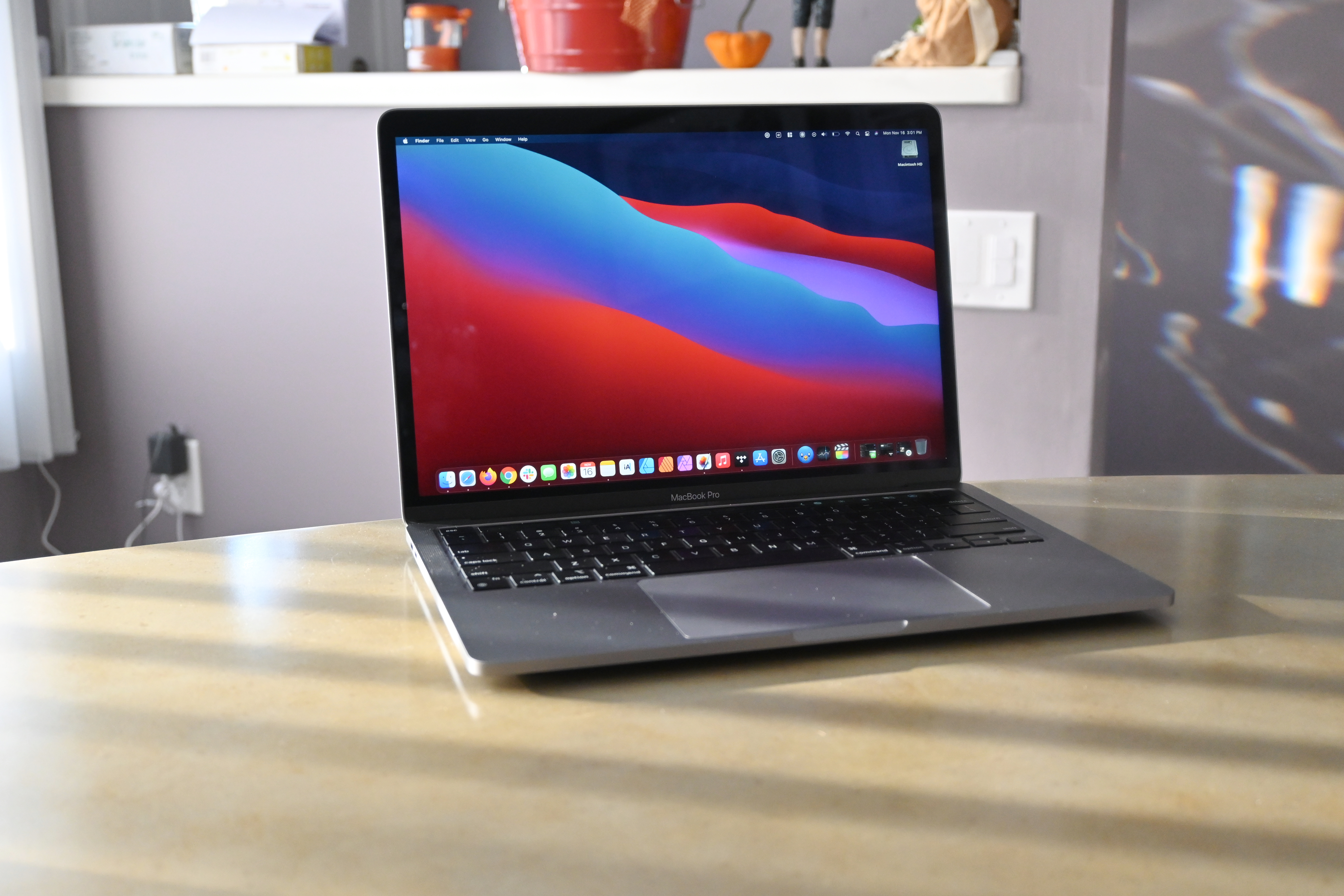 Late last year, Apple introduced a new MacBook Pro laptop with a custom chip called the M1. This new processor made the MacBook Pro a lot more powerful, but it also extended its battery life to up to 18 hours. We’ve tested this laptop thoroughly and routinely get 12 or more hours of use out of it per charge. It is, by far, the longest-lasting laptop we’ve tested.

The M1 is complimented by an ultra-high-resolution 13.3-inch display, 256GB of storage, 8GB of RAM, and two Thunderbolt 3 ports. These specs make the MacBook Pro powerful enough to handle anything you throw at it, from 4K video editing to casual web browsing. We’ve put it through its paces, editing images while listening to music and flipping between dozens of browser tabs. It never slowed down.

The M1 MacBook Pro runs Apple’s macOS operating system, which can run almost any application you need for work or casual use. It can also run Windows if you use a virtualization app like Parallels.

If you’re a Mac user, the new MacBook Pro will be a big step up in battery life and performance. The leap is so significant we feel comfortable recommending PC users consider making the switch. 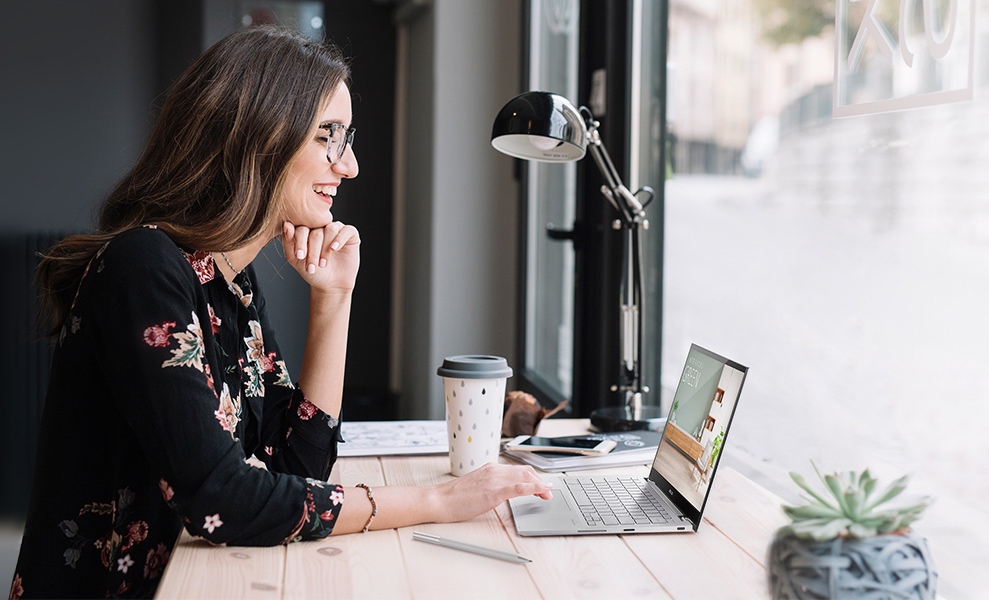 Chromebooks have become very popular recently, and ASUS’ Chromebook Flip C436 is an excellent example of their recent rise.

ASUS says its laptop can last up to 12 hours per charge, which is a lot more than most portable machines. It has a 14-inch 1080P touchscreen, Intel Core i3 processor, 8GB of RAM, and 128GB of storage. That’s a very respectable amount of power for a Chromebook and will allow you to handle most tasks without slowing the machine down. Despite its thin size, ASUS outfitted the Flip C436 with two USB-C ports and a MicroSD card slot.

The Flip C436’s namesake feature is its hinge, which allows you to bend the display 180 degrees. This design choice allows you to put the screen front and center when watching movies, annotating documents, or editing images. This literal flexibility lets you use this laptop in ways that traditional notebook computers can’t match.

The Flip C436’s runs ChromeOS, which is its greatest strength and only potential weakness. ChromeOS is fast, safer to use than a traditional operating system, and constantly updated to add new features. That said, its app selection is more limited. This won’t be a problem if you use programs like Microsoft Word and Zoom, or spend most of your day in a web browser. If you use highly specialized software, you may run into issues. 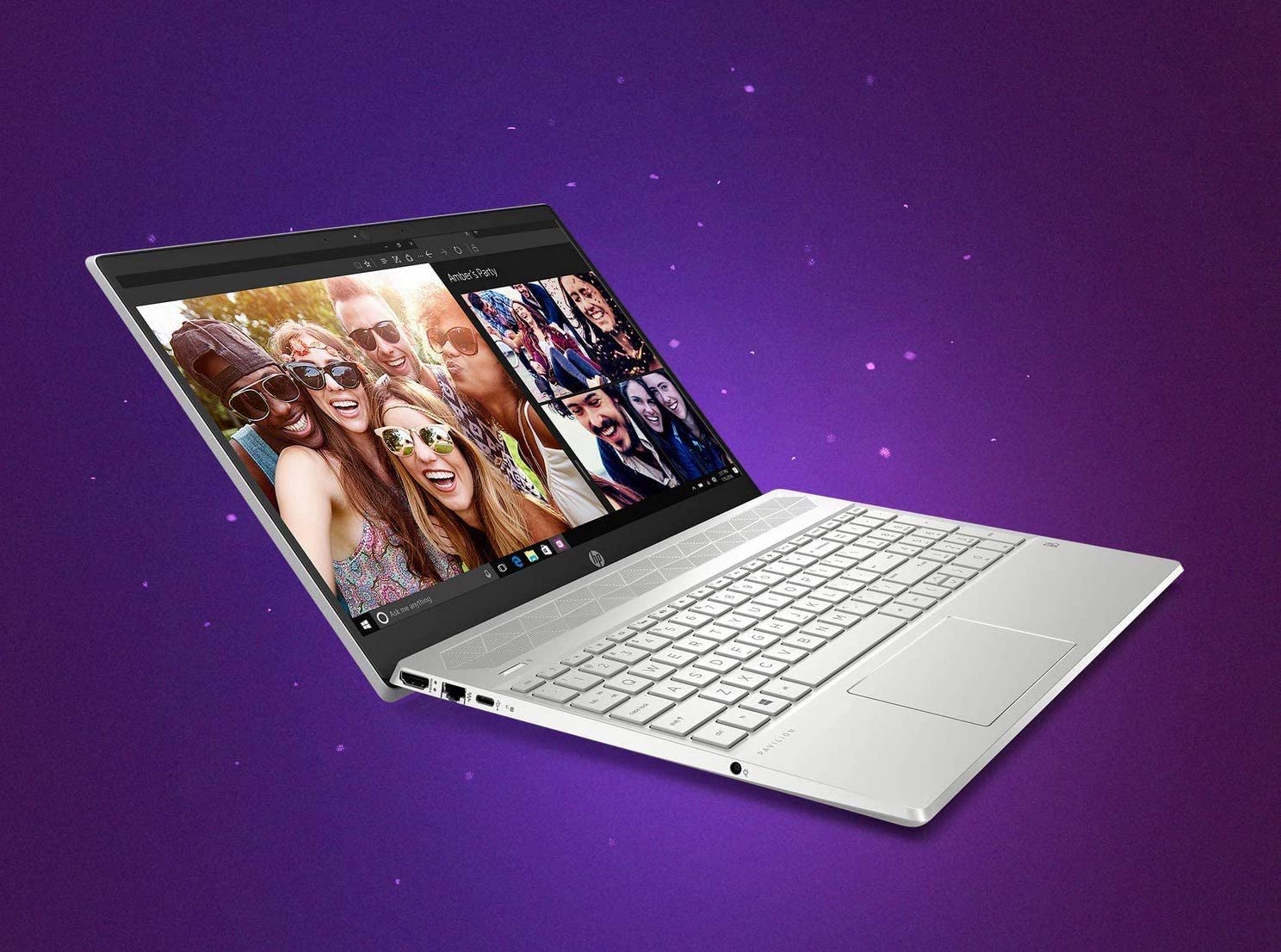 HP’s Pavilion 15 is the company’s latest take on a premium laptop computer, and it can last up to 11 per charge.

HP didn’t cut any corners with this machine, which is built around a 15.6-inch 1080P touch display. The machine has an Intel Core i5 processor, 12GB of RAM, and 256GB of storage. This level of performance isn’t typical in consumer laptops. You shouldn’t have any issues editing 4K video on this computer, primarily because of its big screen.

In terms of ports, the HP Pavilion 15 is fully loaded: It has two USB-A ports, one USB-C port, an HDMI port, an HP Fast Charge port, one Ethernet jack, and an SD Card slot. We’re not used to seeing this many ports on a laptop that’s just .75 inches thick. Impressively, HP says using the fast charge port can refill up to 50% of the laptop’s battery in around 45 minutes.

What makes the HP Pavilion 15 really stand out — beyond its port selection — is little touches, like its stereo speaker system designed by Bang & Olufsen. The machine’s frame is made out of aluminum, which gives it a premium look and feel, too. This laptop even has a fingerprint reader, so you can log into the machine without having to enter a password every time.

If you’re a PC user who needs Windows to get work done, HP’s Pavilion 15 is the ideal choice. 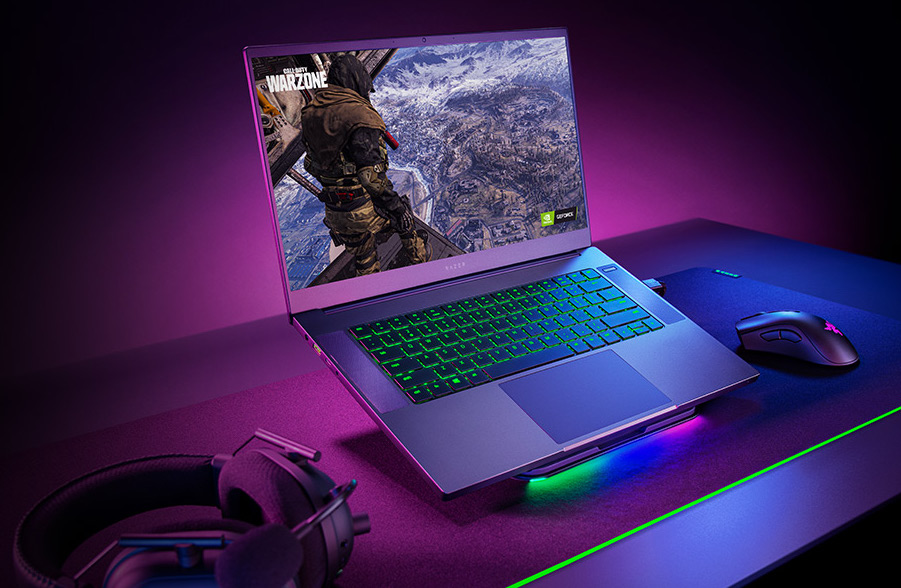 If you’re a serious gamer who wants to play on the go, Razer’s new Blade 15 is the long-lasting laptop for the job.

Razer says it gets up to 6 hours of battery per charge, slightly below average for a conventional laptop but respectable for a gaming laptop. Playing games eats a lot of power, which taxes a laptop’s battery far more than typical tasks.

The Razer Blade 15 is a Windows PC with an Intel Core i7 processor, NVIDIA GeForce RTX 3060 graphics card, 15.6-inch 1080P display, 16GB of RAM, and a 512GB SSD. It doesn’t have a touch screen, but its display has a refresh rate of 144Hz, which allows you to play games a lot more smoothly. The laptop’s graphics card has 8GB of dedicated memory, which will enable you to play games at their full resolution with settings like lighting effects turned on.

Razer outfitted the Blade 1t with three USB ports, two USB-C ports, a full-sized Ethernet port, and an HDMI port. This assortment of ports allows you to hook the laptop up to a monitor, mouse, and other accessories without any adapters. Razer’s hardware is known for its flare, and the Blade 15 is no different. The laptop has a glowing symbol on its lid, and you can control the color of the LEDs beneath its keycaps.

No laptop can compete with a full desktop gaming PC setup, but the Razer Blade 15 does a great job considering its size. Plus, this laptop will let you play high-resolution PC games on an entire cross-continental plane trip under the right conditions.