The Best Walkie-Talkie Apps for Android and iOS 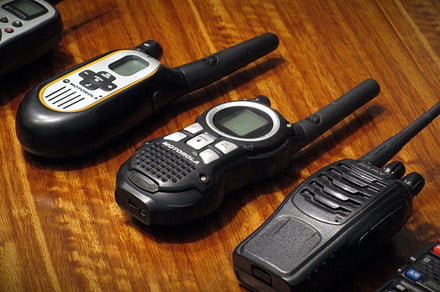 If watching the kids in Stranger Things communicate via walkie-talkie left you wishing it was still the 80s, we’ve got some good news. Walkie-talkie apps bring all the excitement of walkie-talkie chat to your smartphone, allowing you to talk to your friends, send them messages, and leave voicemails. Of course, they don’t use real walkie-talkie frequencies — so you won’t get any interference — but they’re still the coolest, most retro way of talking with your friends. There are even apps that allow you to talk with users in your area and worldwide.

Voxer, Two Way, and Walkie-Talkie are just a few of the options available. Turn your Android or iOS device into a digital walkie-talkie with our hand-picked selection of the best apps.

Zello is one of the most well-known walkie-talkie apps on the market, and it’s most people’s go-to for a walkie-talkie experience. Part of the reason why it’s so popular is because of its usability. It’s easy to import contacts, and tapping on one displays the option to talk displayed front-and-center. You can talk directly with individual people, or you can create a group channel for your friends or work groups. If you’re feeling particularly social, you can even join a specialized channel to chat about specific topics, from cats to local areas. Voice messages will be played out immediately if the app is open, or played later through a voicemail-like system, so you can pick up your messages when convenient.

It’s packed with features and has been updated to work with the Twiins Smart Button. You can also send text messages, images, or alerts. One useful feature is the ability to set a volume level for each user — which is especially handy in group channel talks with those particularly noisy people. There are some issues. It won’t work if you use a mobile VPN, and has trouble with some open Wi-Fi networks — but it’s otherwise the best option available.

Push-to-talk audio is one thing, but push-to-talk video is absolutely another. ProPTT2 is an excellent walkie-talkie app with the ability to transmit video blasts as easily as audio. You can chat in groups or one-to-one, and you’re able to search for and join groups for a variety of interests. We’re particularly fond of the look, which eschews the bright colors of many other walkie-talkie apps, instead opting for a sleek, technical style. It has support for various PTT devices and the Apple Watch, and you can access various chat features like real-time location sharing. You’ll need to sign up to use the app’s features properly, and you only get to make one channel for free, but as long as you sign up some friends, you should have enough to go around. Recent updates include support for dark mode. A 30-day pass to the Pro features will set you back $4.

We love walkie-talkie apps, but too many of them don’t also have room for the more traditional messaging methods. If using an app that has walkie-talkie functionality seems odd to you, maybe check out Voxer. It’s built more like a traditional instant messaging app, and includes threaded view text chat and support for sending images, and is one of the only walkie-talkie apps to have end-to-end encryption. Unfortunately, there’s no option to broadcast to channels like Zello, but you can still create group chats if you need to contact a bunch of people at once. It’s not bug-free though, and users complain about a bunch of fairly annoying bugs. Still, they tend to be relatively minor, like double notifications. Basic access is free, but you’ll need to upgrade to a Pro account for the best features, including a hands-free mode, voice-to-text transcription, the ability to recall sent messages, and more. Pro access costs $4 a month, or $30 for a year.

VoicePing is a fairly simple app — that’s because it’s designed primarily for business users. It can be used by anyone with an Android or iOS device, and it’s built to resemble a more traditional messaging app — but there’s more here than the chat app interface. Voice messages can be played from any contact at any time — even with the screen off and phone locked, and you can choose to chat one-to-one, or pick up to 200 contacts in a group chat. Advanced features allow you to ping specific contacts for attention, or take control of a group chat with an SOS message. It also works with headsets with PTT buttons, making it extremely useful for certain business users.

One of the purer versions of a walkie-talkie app, Breakr commits itself to talking and very little else. It’s as easy to use as you’d expect; hold the button down, talk, and release the button to send your message. But there are devils in these details. Can’t talk? Type your message and it’ll be read out to your recipient with Breakr’s text-to-speech service. There’s a voice changer if you’d prefer to chat anonymously (or just say something in a silly robot voice), and the 24-hour chat history means you shouldn’t miss a message. The downsides? There’s no real text chat option, and it’s iOS-only, so you’re limited to only chatting to friends with iPhones.

A much simpler app than some of the other entries on this list, Two Way is the walkie-talkie app of choice for the extrovert. There’s no option to pick-and-choose individual contacts, and you can’t send text messages or images. Instead, you can pick a specific geographical area (local or national) and broadcast to that area. As such, you’re opening your broadcasts for absolutely anyone else to hear and respond to. So don’t be surprised when you start getting replies from people you don’t know. If you love starting conversations with strangers, then this is an excellent way to do so — and thanks to the way the app is set up, you do so without any risk of giving away intimate details of yourself. Thankfully, if you want a more private conversation you can head into the Key Pad feature and choose a channel to chat in instead. The huge selection of channel numbers should mean you won’t have to share with anyone else. There are reports the app doesn’t work properly on Android 9.0 Pie and Android 10, but if you turn off Battery Optimization you shouldn’t have an issue.

It’s possible you don’t need all the specialized messaging features, the “listen later” messages, or friends lists. If, up until this point, most of the components have been a bit over the top for you, then we recommend Walkie-talkie to satisfy your minimalist needs. To be blunt, it’s solely a walkie-talkie app — turn it on, select your preferred frequency, and begin chatting. You won’t need a username or password to log in to an account because there’s no particular account to access anyway. Just download the app and start speaking. The user interface is simple to use, and it resembles a classic plastic-style walkie-talkie. Besides its nice nostalgic, minimalist touch, there really aren’t any additional features to this app. You can listen to different frequencies and change the background color, but that’s about it. Currently, the app is available on iOS. However, you can also check out a website version, which we couldn’t get to work. Still, this is a fun and easy way to stay in touch with someone without the effort that other apps can require.

Walkietooth landed on our list for a couple of reasons: it’s a money-saver, and it’s versatile. While their need for a data connection can bog down other apps, Walkietooth uses other connections instead. This app can create a direct connection with a device by using Bluetooth, Wi-Fi, or by connecting with other devices on the same network. You can opt to use this walkie-talkie solely to share audio, or you can add a video to the call at any time. We get that video calling doesn’t align with the classic walkie-talkies, but its dual-usability makes it a far more useful product. For example, you could use it as a possible baby monitor if you’re in quick need of one. Or a group of motorcyclists can take advantage of the Bluetooth feature and stay in touch while you’re on the road— although, be prepared to possibly lose connection if you drive through an area with zero mobile data. You can honestly think outside of the box and use this tool for whatever you need. This app is currently only available for Android users, and it, unfortunately, doesn’t look like Walkietooth will produce an iOS version anytime soon.

HeyTell is a reliable cross-platform app that’s capable of connecting a large group of people. It’s available on iOS and Android and has the unique capability to to Facebook, so you can connect with friends via your profile or contact list. HeyTell makes it extremely easy for you to connect with whoever you’d like to talk to on the service. The company behind HeyTell values privacy as well— they employ a three-tiered privacy system to keep your information safe within the app. You can also use an in-app voice-altering tool to modify your voice and disguise your identity as you’re using the feature. One major downside we found is that this is an older app. The producers haven’t released an update for it since 2016. It still has many useful features, but you may have to jump through a few hoops to get them to work. You can check through HeyTell’s app pages to read more about the caveats you’ll have to follow to get the outdated app to work.