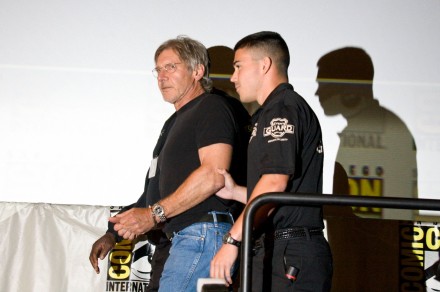 Over the course of its long history, Comic-Con has had plenty of great moments and panels. Ultimately, though, these are the panels that rise above the rest as the best in the history of Comic-Con.

Disney’s 2008 panel concluded with a trailer for Race to Witch Mountainjust as everyone had anticipated. Just when attendees assumed that the panel was over, though, a teaser for the long-awaited sequel began playing. The teaser was actually created as a proof of concept to sell Disney on the film, but it was so effective that it wound up being an enticing teaser for fans at the conclusion of Disney’s panel.

As part of promotion for Cowboys and Aliensthe plan had long been for Harrison Ford to be escorted to the stage of Hall H in handcuffs — the joke being that Ford had to be dragged on stage for the panel. After a violent episode broke out in Hall H, though, with a man ultimately being stabbed through the eye with a pen, Ford’s onstage antics read very differently. Thankfully, it was just what the doctor ordered to ease the tension in Hall H, even if the movie he was there to promote didn’t ultimately live up to expectations.

Ryan Reynolds’ time as the Green Lantern didn’t turn out all that well, but there was a time when there was still plenty of excitement around his casting. Before everyone could be disappointed by the finished product, though, Reynolds got to have a sweet moment with a young boy who asked him what it felt like to recite the Green Lantern oath.

Reynolds then proceeded to recite the oath from memory, and the boy who had asked the question was visibly moved by his recitation. He showed off his child-sized Green Lantern ring, and Ryan Reynolds then showed his movie prop counterpart.

The 2016 Marvel panel included the first footage from Spiderman: Homecoming and Brie Larson’s debut as a member of the MCU, but the panel is best remembered today because of the introduction of the Ravagers, who came from the back of the hall and proceeded to mock the panel’s moderator.

They then came up to the dais and proceeded to answer questions from fans in character. It was a supremely funny bit, and the kind of thing that Marvel has become so great at as they’ve come to dominate Comic-Con.

Before the cinematic universe was a glimmer in anyone’s eye, there was Iron Manwhich debuted a 4-minute trailer exclusively for those assembled in Hall H. The audience in attendance was clearly gripped by the trailer, and suddenly, it seemed clear that something different was happening around Iron Man.

This would be the launch for an entire universe, and the rapt attention the crowds gave to this footage suggested what was coming, even if they didn’t know for sure.

Avatar and Twilight duke it out

In 2008, both James Cameron and Twilight fans were eagerly anticipating new films, and the panels for those movies were scheduled to be held back to back. The panels were switched so that Twilight: New Moon would come first, in part so that the Cameron devotees wouldn’t be forced out of Hall H but Twilight fans just waiting for their panel to start.

Cameron wound up showing the first 25 minutes of the movie in Hall H, so of the two panels, the Avatar one certainly had a more lasting legacy.

Tom Hiddleston has clearly enjoyed his time playing the trickster god Loki, and that may never have been more true than in 2013 when he appeared at the Marvel panel in character. Giving a speech similar to the one he had delivered in The AvengersHiddleston demanded that the audience in Hall H bow before him if they wanted to see what Marvel had in store for them.

It was a thrilling moment, and one that is still talked about today. Other panels would try to replicate in the years that followed, but none could quite match Hiddleston’s commitment to the endeavor.

Joss Whedon and J.J. Abrams sit on a joint panel

Joss Whedon’s pop culture legacy is unquestionable, even if he’s not the universally beloved figure that he once was. The cloud of the allegations against Whedon certainly hung over the panel he sat for with fellow nerd god J.J. Abrams, but it’s hard to deny that the chance to hear the two of them discuss their history of fandom was a rare treat.

They talked about first meeting when Abrams was working on Felicity and Whedon on Buffyand there was also some news coming out of the panel: Abrams confirmed he was working on a Star Trek sequel, and Whedon said he would be directing The Avengers.

Godzilla is coming back to the big screen

Comic-Con panels can break news sometimes, but most of the time fans have speculated about what’s going to happen, at least to some extent. Legendary’s 2012 panel was somewhat unusual, then, because they completely surprised audiences with an announcement that Gareth Edwards would be working on a reboot of the Godzilla franchise. What’s more, they already had a teaser trailer, which they proceeded to show not once, but twice.

Batman will be fighting Superman

After Man of Steel debuted, many were curious whether DC had plans in the works to create its own version of the Marvel Cinematic Universe, which was already in full effect by 2013. Although Man of Steel had just hit theaters, director Zack Snyder took to the stage to announce that Batman’s battle with Superman would be featured in the Man of Steel sequel.

Snyder didn’t even need any footage to accompany the announcement. All he had was a logo, and that’s all that fans needed to lose their minds.