The best Marvel shows not on Disney+ 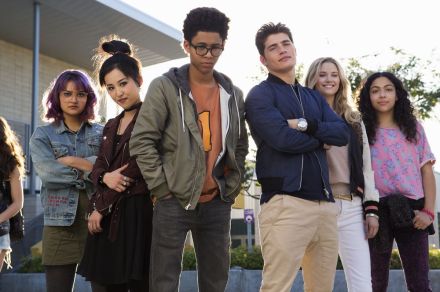 The history of Marvel on TV is a lot messier than their work in theaters. Before Marvel TV was integrated into the MCU and landed on Disney+, there was a wide array of other stuff going on that was either loosely or closely connected to the movies that were regularly premiering in theaters. In general, though, TV has only become more important for Marvel’s overall stories.

For a while, Netflix had its own staple of Marvel shows that were designed as their own cinematic universe and were often loosely tied to the MCU proper (those shows have now migrated over to Disney+). Some of those shows were successful and others weren’t, but they were the first foray into telling high-quality, interconnected Marvel stories on a smaller scale.

Even since many of the Marvel shows started airing on Disney+, other, stranger stuff has also debuted on platforms like Hulu. Those shows have almost no close connection to the MCU, but many of them are worth considering anyway. Marvel has become one of the most sprawling universes out there, and that would ideally mean that the studio can tell a wide array of different kinds of stories. While that isn’t always the reality, there is plenty of great Marvel content to be found, even once you look past the things that are most directly tied into the MCU.

A show like Runaways is a slam dunk in the world of superhero fiction. Following six teenagers who are dealing with having superpowers at the same time as they are figuring out who they really are, the show is a coming-of-age dramedy that has superpowers running in the background.

Things only get more interesting when the kids realize that their parents aren’t all that good, and decide to team up to take them on. The show only lasted for three seasons, but each one of those seasons has plenty of good stuff in it, and the show is all the better because of its fairly limited connections to the rest of the MCU.

An animated show that was originally supposed to crossover with M.O.D.O.K., Hit-Monkey follows a Japanese monkey who decides to take on the Japanese criminal underworld with help from the ghost of an American hitman. This outlandish premise provides plenty of good laughs, but also a fair amount of pathos. The show features an array of vocal performers including Jason Sudeikis, Olivia Munn, and George Takei. It’s a deeply bizarre show, but it’s all the better for its willingness to go to some truly strange places.

In general, Marvel plays by a pretty standard rulebook. They use a specific jokey tone, and they rarely very deviate from that rulebook. With M.O.D.O.K.though, Marvel took a fairly big swing. It helps, of course, that this show was fairly low budget, and it has almost no connection to the broader cinematic universe.

Following a low-level villain in a stop-motion, animated format, the show doesn’t feature the kinds of massive battles that have come to define the broader Marvel universe. It’s an outright comedy starring the voice of Patton Oswalt, and it’s all the better for its deviations from the broader Marvel template.

Easily the weirdest Marvel-adjacent show, Legion was the three-season brainchild of Noah Hawley and had virtually no connection to the broader MCU. The show followed David, a mentally unbalanced man who also possesses a great amount of telekinetic power. The show spends much of its time asking you to doubt whether David has powers at all, but what makes Legion so stupendous is its commitment to making deeply unusual creative choices, even as David evolves from a sympathetic character into an outright villain. Thanks to strong work from Dan Stevens, Legion became unmissable, even when it was totally bizarre.

Another Marvel show focused explicitly on teenagers, Cloak and Dagger is something closer to a teen romance. The show follows two young people on the run who come from wildly different backgrounds and find that they have more in common than they expected, including some burgeoning superpowers.

While there are only two seasons, there’s plenty of joy to be found in Cloak and Dagger from its very first moments, including an appealing pair of central performances from the two lead actors. If you’re looking for a charming teenage romance that has a little bit of a sci-fi flair, you could do a lot worse than Cloak and Daggerwhich originally aired on Freeform before moving to Hulu.

Another show focused in large part on teenagers, The Gifted follows a suburban American family who find that their children are developing superpowers. Although the show certainly exists in a world where powers are possible, this show is set in a world with mutants and is a vestige of Fox’s version of the X-Men universe.

While The Gifted was never designed to be part of the MCU, the show is plenty compelling in its own right. After discovering that they have powers, the family is forced to join an underground network of mutants as they face a government that is hostile to those with powers. Over the course of its two seasons airing on Fox, The Gifted earned plenty of fans, although there were also those who found the show a little bit unfocused.

Although it was canceled after just a single season, there’s a good reason to check Whole room out if you’re someone who wishes that Marvel properties could be just a little bit more terrifying on occasion. Whole room is not an out-and-out horror show, but it has more elements of that than any other series that has ever had the Marvel brand attached to it.

Following the son and daughter of a serial killer who seems to have immense power, the show explores their dynamic as they work to take down the worst that humanity has to offer. The show received pretty negative reviews when it first premiered, but if you’re curious about a more horrific approach to the world of Marvel, then Whole room may be a good place to start.