The list of the highest-paid actresses looks a bit different this year. The coronavirus pandemic has kept traditional movie theatres from showing many films and that affects the bottom lines of the talent appearing in the films, since their deals typically include some back-end portion of the box office receipts. That means typical stalwarts of the highest-paid actresses list, like Scarlett Johannsen and Jennifer Lawrence, are missing from this year’s list. Half of the women on this list made their paychecks on the small screen – where their full salaries are paid upfront – from traditional network shows to HBO to streaming services including Netflix.

Modern Family’s Sofia Vergara tops this year’s list of the world’s highest-paid actresses. Ellen Pompeo and Viola Davis are two other television stars who made the top 10 this year for, respectively “Grey’s Anatomy,” and “How to Get Away with Murder.” Elisabeth Moss’s small screen turn in “Handmaid’s Tale” earned her a spot on this year’s list as well.

The top 10 highest-paid actresses made a combined $254 million in the 12 months from July 2019 to June 2020. By comparison, the 10 highest-paid actors made $545.5 million in the same period. That’s down 20% from last year. All but two of the actresses made the bulk of their money this past year from streaming and television. Only Angelina Jolie and Emily Blunt made the bulk of their money from traditional movies. Their salaries are a combined $58 million, which is down from $136.5 million last year. 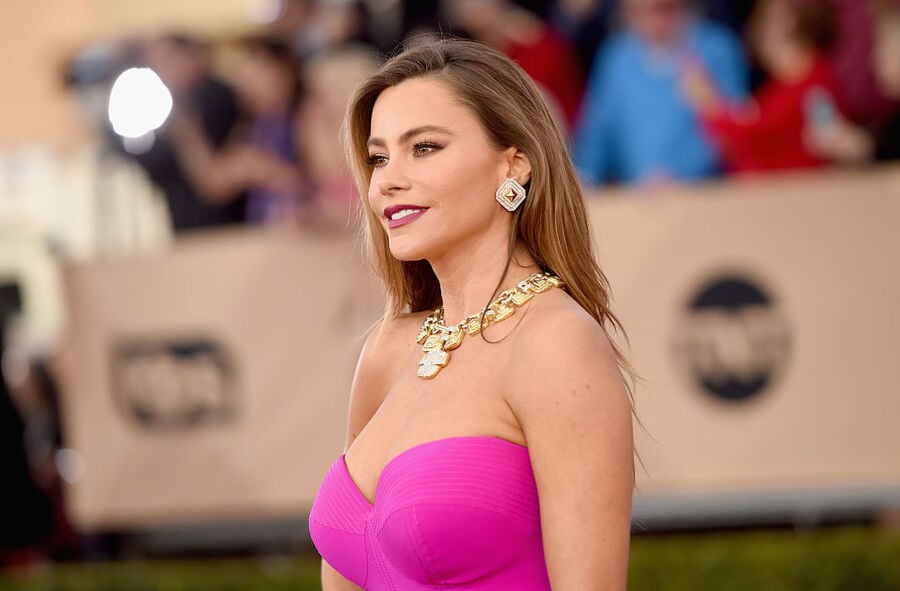 This is the first time the veteran actress has made the list of the 10 highest-paid actresses thanks to her paycheck from her role as attorney/law professor Annalise Keating on “How to Get Away with Murder” as well as her role in Netflix’s “Ma Rainey’s Black Bottom.”

Elisabeth Moss is a sensation in Hulu’s adaptation of “The Handmaid’s Tale.” That’s the bulk of the reason she landed in the top 10. Her share of the profits from the surprise hit “Invisible Man” also helped.

Ellen Pompeo earns roughly $550,000 per episode for “Grey’s Anatomy.” She also brings in around $6 million annually from her share in the syndication profits of the long-running ABC show.

Nicole Kidman will next appear in Netflix’s “The Prom” from Ryan Murphy. She made an eight-figure salary up front for her role. Kidman is also making $1 million per episode for “The Undoing,” an upcoming HBO miniseries.

Meryl Streep appears in Steven Soderbergh’s comedy “Let Them All Talk,” which sold to HBO Max for $33 million and netted Streep at least $5 million. The other $19 million came from her role in “Little Women” last year and her upcoming role alongside Nicole Kidman in Ryan Murphy’s “The Prom.”

Melissa McCarthy is appearing in two streaming films—one each on Netflix and HBO Max. Both were directed by her husband Ben Falcone. She also hosts “Little Big Shots” on NBC.

Gal Gadot’s paycheck would have been higher, had the pandemic not postponed “Wonder Woman 1984.” She appears in Netflix’s “Red Notice,” which she earned $20 million for. Filming of the action-comedyand co-starring Dwayne Johnson and Ryan Reynolds was delayed due to the coronavirus, but got underway in mid-September and is expected to be completed in mid-November.

Angelina Jolie’s largest paycheck from this past year came from her role in the upcoming Marvel film “The Eternals.” The film is scheduled for release in November 2021.

Sofia Vergara’s run on ABC’s “Modern Family” came to an end in April. She earned $500,000 per episode. She now appears as a judge on “America’s Got Talent,” for which she earns at least $10 million per season. Vergara also earns substantial money through her endorsement deal with Rooms to Go and her line of jeans at Walmart.

One thought on “The 10 Highest-Paid Actresses Right Now”