Stray review: This sci-fi cat adventure is a whole vibe 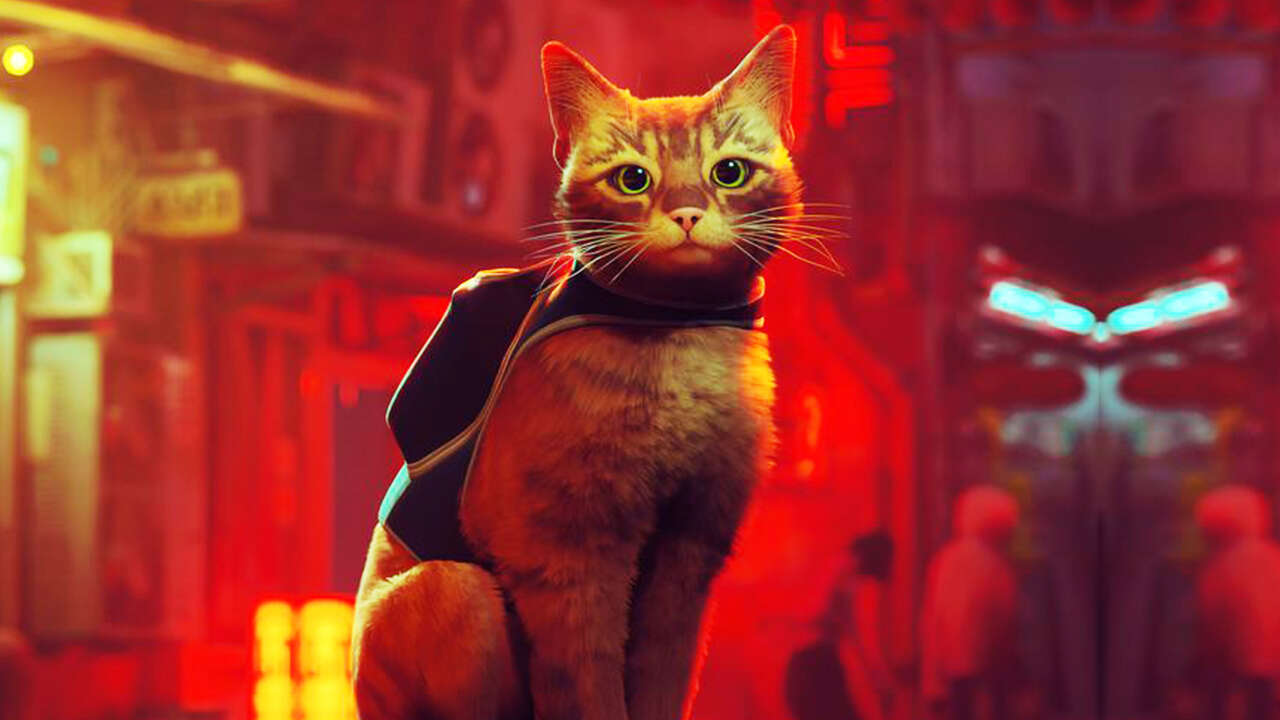 “Stray delivers on its adorable cat adventure premise, but its excellent atmosphere and strong sci-fi storytelling are what elevate it.”

I was lying on my couch playing Stray when my cat, Mirah, jumped up next to me. As I controlled the game’s digital orange cat, Mirah climbed onto my legs and lay down with her face pointed towards the screen. I could feel a gentle rumble as she purred, not dissimilar from the vibrations my DualSense controller’s haptic feedback was giving off. It’s perhaps the only moment I’ve had while playing a game where the natural and mechanical felt perfectly in sync.

Stray explores that very intersection with a sense of cat-like curiosity. Developed by BlueTwelve Studio, the adventure game imagines a not-too-unbelievable future where humans have destroyed themselves, leaving overgrown plants, animals, and sentient robots to take charge of the Earth. Much has been made about the game’s adorable feline lead since the game was first announced, but Stray isn’t just a cute gimmick; it’s a forward-thinking science-fiction game about our increasingly complicated connection with technology.

Between its clever (though limited) gameplay ideas and weighty social commentary, Stray is a special experience that works best as a futuristic mood piece. And a really darn cute one at that.

Stray has perhaps the easiest selling point in the history of video games: Live out your ultimate fantasy by controlling a totally normal cat. The game’s orange hero isn’t some anthropomorphized, talking tabby running around on two legs. It’s your everyday pet that naps and scratches couches. That premise allows for some creative gameplay decisions that are always a delight to discover.

Separated from its family after dropping into a walled city full of sentient robots, the furry hero has to use its unique skills to solve puzzles and escape the mysterious slums. BlueTwelve Studio has a blast here figuring out how standard cat behaviors can twist into navigation tools. For instance, scratching a door might cause an annoyed robot to swing it open, allowing you to dart inside. A stealth section had me jumping into boxes to hide from patrolling drones. Even totally optional interactions, like finding a good book nook to nap in, are joyfully clever.

There are limits to what Stray’s able to do with its feline setup. By the end of my journey, it felt like just about any non-platforming puzzle was solved by scratching or knocking something over. Some of the charm gets lost in those moments, as I’d almost forget I was controlling a cat altogether once the adventure game auto-pilot kicked in. There are a small handful of traditional puzzles that require brainwork, like using written clues to figure out safe combinations, but Stray doesn’t quite find as many ways to utilize the few skills players have as well as, say, Untitled Goose Game.

It’s the authentic feline moments that make the game special …

To widen out the list of actions players can do, Stray gives its cat hero a drone companion that handles the more basic adventure game tropes like trading items with NPCs. Those ideas help bring some variety to the game, though they can feel a little obligatory at times. For instance, one brief stretch of the game introduces a combat mechanic that disappears before it can really develop.

It’s the authentic feline moments that make the game special rather than its video game-y ones. For me, the most memorable scene wasn’t when I was running from a pack of parasitic enemies. It was when I got my head stuck in a paper bag, inverting my controls until I managed to shake it off. Those often comedic touches gave me a momentary glimpse into my cat’s confused little brain. No other game I’ve played with an animal lead has really captured that feeling in the same way, but now I wish more did.

The world is your litter box

The cat-focused gameplay is only a small part of what makes Stray work. The real star of the show is its distinct atmosphere, which turns the game into a truly transportive experience. From the game’s astonishing electronic soundtrack to its detailed cityscapes awash in decaying neon signs, it’s easy to black out the real world as you wander around the digital one (that is, unless your actual cat gets hungry and starts shouting over your headset).

Stray feels like a direct descendant of Ico. There’s an underlying sense of tragedy present in the isolated robot world, but the game doesn’t have a depressing tone. The feline perspective allows players to see a potentially dystopian space through earnestly curious eyes. Dilapidated apartment buildings become cat towers with lots of ledges to jump on and nooks to explore. There’s a sad backstory behind it all, but it’s a game about a creature finding a way to survive and thrive in any environment it’s placed in.

The navigation system helps emphasize that idea. Rather than giving players a jump button and having them struggle with tricky platforming puzzles, Stray takes an Assassin’s Creed-like approach to movement — call it purrkour. Players move from surface to surface by pressing the X button when it appears on screen. That allows the cat to make precise, agile movements as it safely scales architecture. There’s no threat of death due to a mistimed jump when exploring; the game wants to indulge your curiosity and encourage you to bravely snoop around.

It helps that the locations, inspired by the real-world Kowloon Walled City, are so intricately designed with lots of nooks and vertical space to play around with. The first major area you’ll encounter is a compact, but open city that can be freely explored. First, I hopped up as high as I could, slipping my way through barely-open apartment windows. Later, I hopped onto the ground and strolled through narrow alleys as I chatted with the local robots lining the streets. Even when there’s nothing to find in some tucked-away corner, I was content just sticking my head where it didn’t belong (the more I write this, the more I’m starting to understand why my cat is so eager to stick her head in the fridge anytime it’s open).

Where other games turn exploration into a chore with endless tasks to chase, Stray gets that a well-designed world doesn’t need to dangle treats in front of players to get them to move.

If you’re the kind of person who sees Stray as a “meme game,” you might be surprised by how weighty its story is. It delivers a socially conscious sci-fi narrative that weaves together a variety of modern threads. There’s a clear environmentalist streak, for instance, digging into how humanity is poisoning itself out of existence. That runs into a class inequality reflection, as the robot city is essentially a slum that humans used as a giant dumpster.

Stray understands that tech is often just used as a scapegoat to excuse the people who abuse it.

The cat hero may be the character that gets the most attention, but the androids that populate the world give the story its heart. Using my drone pal as a translator, I quickly became engrossed in the mysterious robot backstory told through collectible memories. It’s a bittersweet story about sincere machines that wanted to engage with their creators and the uncaring humans that abandoned them.

It would be easy for a story like this to be cynical about technology, placing all the world’s problems on all those dang screens we look at. But Stray understands that tech is often just used as a scapegoat to excuse the people who abuse it. It’s telling that the closest thing the game has to antagonists are androids that have recreated the idea of a police state by mimicking the wrong people.

It’s easy to see Stray’s decaying cities as a dark dystopia, but I actually walked away feeling the opposite. It imagines a world where nature and technology have found a natural balance, undisturbed by the selfish chaos humanity can often bring to the equation. We’ve always seen androids in sci-fi depicted as creepy villains that’ll bring about mankind’s downfall; Stray posits that maybe they’d actually be better caretakers for our planet than we are.

Stray isn’t a furry gimmick that’s in it for the memes. Its cat-centric gameplay brings a fresh perspective to the adventure genre, putting an emphasis on curiosity-driven exploration. Some of its gameplay ideas feel limited and underutilized, but playful cat interactions make it a warm and fuzzy experience from start to finish. Come for its adorable furball hero, but stay for the socially conscious sci-fi story about how human beings are the architects of their own downfall.

Not really! Stray’s feline gameplay is a bit one-of-a-kind for a game of this scale.

The story took me around five hours to complete, though I missed a few collectibles. A 100% completion should be closer to six or seven hours — eight if you’re going for the “nap for an hour” achievement.

Yes. Stray is a truly unique (and adorable) adventure game that is much more than its central selling point.

Stray was tested on a PlayStation 5 hooked up to a TCL 6-Series R635.