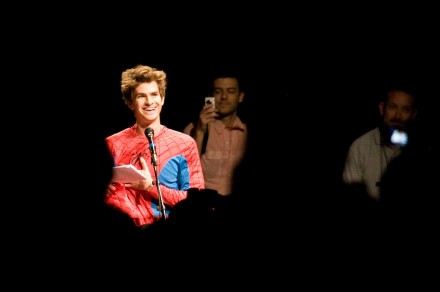 As it’s evolved over the years, San Diego Comic-Con has become one of the most important publicity events in the world. The annual festival gives major studios a chance to unveil some of their biggest projects, and over the many years of its existence, it’s also been home to a number of fascinating stunts and promotional ploys.

Some of those stunts worked incredibly well, and others failed to garner excitement among a notoriously hard-to-please fandom. Today, we’re looking at some of the very best moments from Comic-Con history.

Andrew Garfield’s eventual Spider-Man movies weren’t exactly beloved by fans or critics, so it’s easy to forget how enthusiastic he was about the chance to take on the role. In fact, this appearance, which came at the 2011 Comic-Con, may have been the peak of his entire run in the role.

Showing up in the audience in a store-bought costume, Garfield said that it was his dream to be in Hall H before removing his mask to reveal who was under it. Garfield went on to read a prepared statement about what being in the role meant to him, which was both moving and clearly a bit nerve-wracking for the actor.

The Avengers assemble in Hall H

2011 was pretty heavy on previews of Marvel content, but the studio’s biggest boon was a teaser narrated by Samuel L. Jackson which talked of the day when Marvel’s Avengers would team up. Following the teaser, Scarlett Johansson, Chris Evans, Chris Hemsworth, Jeremy Renner, Mark Ruffalo and Robert Downey Jr. all took to the stage. They didn’t take any questions, but the moment itself was more than enough to get fans pumped about what Marvel was becoming.

Before Iron Man had even hit theaters, back in the days when Tobey Maguire’s Spider-Man movies were still the peak of superhero prowess, Kevin Feige had an idea about where all this might be headed.

In 2006, Feige was asked about the potential for Marvel projects featuring characters like Iron Man, Hulk, etc. to crossover, and gave what turned out to be a pretty prophetic answer: There’s no coincidence that that may, someday, equal the Avengers. Having that possibility on the horizon is something that excites all of us.”

In the decades before Comic-Con became the massive event that it is today, a little movie called Star Wars attended in 1976 and held a panel designed to intrigue the nerds who would be core to its audience.

The panel featured stars from the film, and while it wasn’t the kind of mass gathering that exists today, it proved that Comic-Con could tease out new, mass entertainments long before the public caught wind of them.

Hiddleston seemed to appear out of nowhere and told the crowd they would have to swear loyalty to him if they wanted to see Marvel’s 2013 announcements. The crowd ate it up, and a legendary San Diego Comic-Con moment was born.

Zack Snyder teases a battle between Batman and Superman

Marvel got to have a lot of the fun at Comic-Con, but they certainly don’t have a monopoly on it. In 2016, following an announcement a few years earlier that Man of Steel‘s sequel would be a battle against Superman, Zack Snyder shared a sneak peak of what Batman v Superman would look like.

The scene, which featured Batman and Supes preparing to square off in the ever dark and gloomy DCEU, seemed to be taking a page out of Frank Miller’s seminal comic book The Dark Knight Returnsand while the final product didn’t live up to that teaser, it got plenty of people excited in the moment.

The return of the Star Wars franchise was met with a lot of fanfare both at Comic-Con and elsewhere, and while J.J. Abrams was mum on pretty much all the details about The Force Awakens at his 2015 panel, he more than made up for it by inviting everyone in attendance to a Star Wars concert afterward. 6,000 people turned out, many of them with lightsabers in hand, to listen to the San Diego Symphony Orchestra play John Williams’ beautiful score.

Comic-Con was mostly for movies until 2004 when ABC took a big swing by deciding to debut the pilot for Lost. The show was a smashing success with that crowd, which helped it to build the kind of buzz it would need to become the ratings juggernaut it was for the network during its earliest seasons.

Following its official debut, Lost would return to Comic-Con a number of times over the course of its run, and was always met with a rapturous response from the crowds in Hall H.

During his Breaking Bad panel, Bryan Cranston revealed that he had been walking the floor of the convention hall dressed as Walter White while wearing a disturbingly life-like mask of his own face. He had a camera crew with him, but even that didn’t tip people off to the fact that it was really Cranston.

Cranston’s disguise led a number of famous faces to pull similar tricks, but Cranston was the first, and for our money, the most stylish to pull off this trick.

The promotional campaign for director Christopher Nolan‘s The Dark Knight was almost unprecedented, and its many teasers and trailers ultimately helped the movie become the smashing success that it was. At Comic-Con, the marketing minds at Warner Bros. concocted a scavenger hunt that would lead a select few to the movie’s new teaser trailer.

They had to scatter across San Diego to find the clues, which were often written in the sky or handed out by people dressed as the Joker. It was highly elaborate, but more than worth all the trouble.