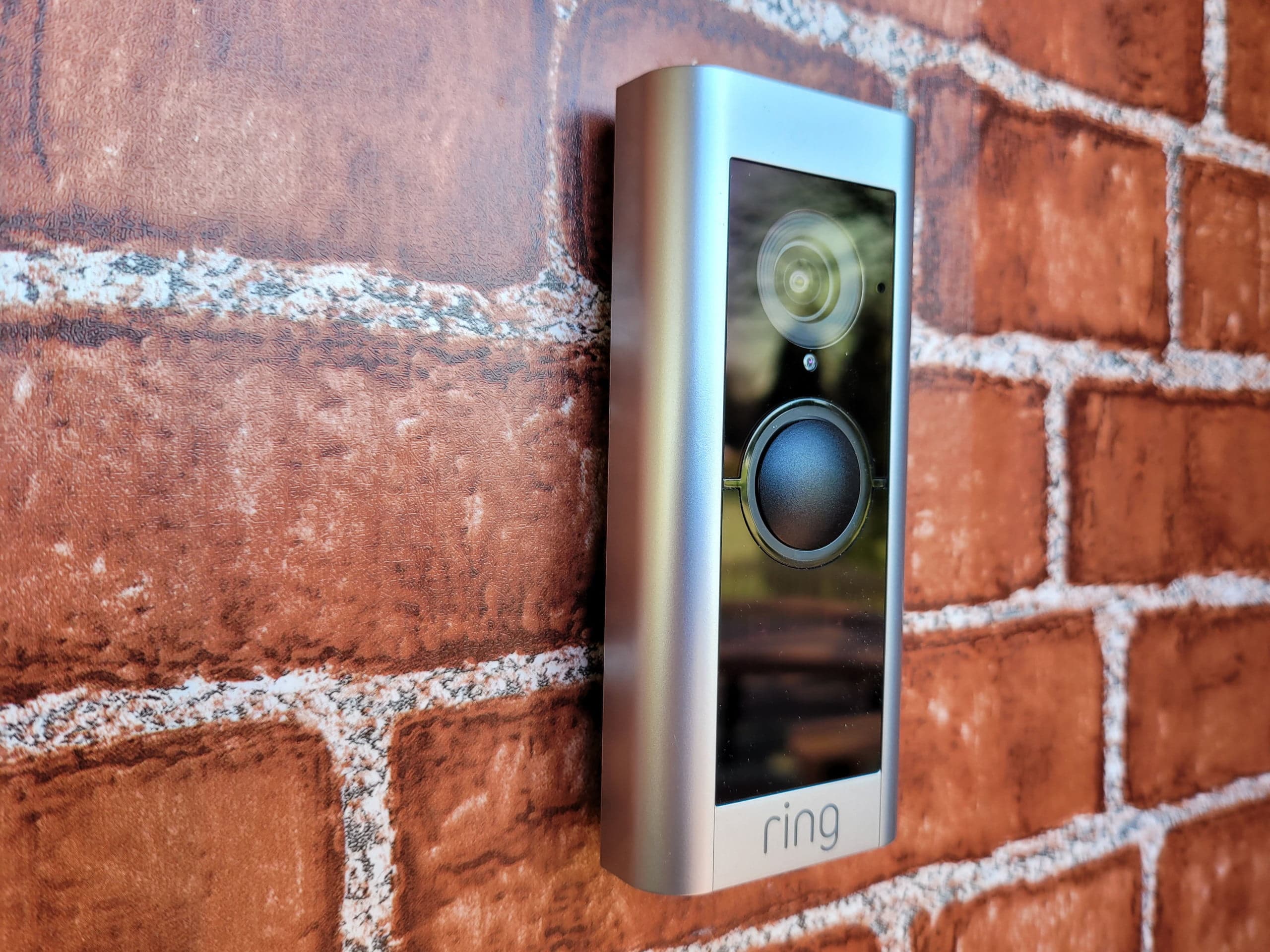 “Ring took its best doorbell and added a bump in the key specs. Then it gave it radar!”

Ring’s latest video doorbell builds upon previous successes and adds a new dimension to its bag of tricks: Radar, which seems all the rage right now in the smart home industry. Ring is hoping that the addition of radar can make motion tracking even more accurate and more fun to play with. It certainly makes for a nice demonstration, but how useful is it? That’s what I wanted to find out.

When you compare the Ring Video Doorbell Pro to the Ring Video Doorbell Pro 2, there are few physical differences. They basically look exactly the same. But while the horizontal field of view is narrowed slightly on this newer generation (150 degrees down from 160), you get a much wider vertical field of view (150 degrees, up from 90). Plus, you get what Ring calls “3D motion detection,” which I’ll touch on in a bit. Ring also increased the resolution of its camera to 1536p HD video. In short, Ring took an already excellent performer and boosted it with some new technology, so let’s take a look and see how “boosted” it is.

But first, we should look at the doorbell as a whole. On the face of things, most of the upgrades you get over the previous-generation Ring Video Doorbell Pro are minor. You get more resolution and more field of view, but beyond that, there’s not much. That’s only because the Ring Doorbell Pro already sets a very high bar. It’s not surprising that Ring built radar into this generation because everything else would be hard to top.

The Ring Video Doorbell Pro 2 still gives you its awesome installation experience, with voice prompts as opposed to cryptic beeps or messages displayed on your phone. You get the great Ring software experience, including the Neighbors app, the cameras provide great clarity during the day and at night, and the reduced horizontal field of view isn’t that much of a reduction, so you’ll still be able to see everything in front of your door.

As for the video quality, it’s still quite clear.  This generation upped the resolution to 1536p, which is the highest yet. Videos during the day are crisp, with barely a hint of fish-eye effect on the edges. Color reproduction is good, if a touch on the cool side. The picture is very well-balanced, even in bright sunshine. At night, the camera is capable of lowlight color, that switches to IR as needed. In short, the camera is very good.

Alexa as a concierge

One feature that isn’t new to the Ring Video Doorbell Pro line (but was new for me) was using Alexa to answer the door. If someone rings your doorbell, Alexa can step in and greet your visitor for you after a designated period of time. Alexa is pretty limited in this capacity; you can select from a number of preselected messages. For example, Alexa can instruct a package handler where to leave the delivery or she can ask your neighbor to leave a message.

I would have liked to see a little more artificial intelligence (A.I.) involved here. Stir in some facial recognition and package detection, and you can have yourself a nice virtual butler at your front door. For as much as Amazon wants to shoehorn Alexa onto every kind of device under the sun, I’d expect Alexa to be a bit smarter here.

You also don’t need Alexa to say: “Please leave the package by the door.” It’s just a prerecorded message. In fact, I’d argue that allowing people to record a message saying, “I can’t get to the door, but can you leave the package by the garage,” would actually provide more security than a generic Alexa message. I guess after all this time, I just want Alexa to be a lot smarter.

Your front door in 3D

One of the highlights of Amazon’s latest generation of doorbell is what it’s calling “3D motion detection.” It uses radar built into the doorbell to tell you where the action you see on your video feed is actually taking place. When you’re watching the live feed, or a playback of a previous event, you’ll see a bird’s-eye view of your house (read: satellite view), with dots placed on the map showing you where action took place. Amazon claims it can detect motion out to about 30 feet. I clocked it at closer to 20, but that’s still pretty impressive. In some cases, the radar detected my dog before she jumped up onto the back deck, and you could see her clearly. Ring’s radar knew something was back there.

It works like this: As your subject moves in the frame, a trail of dots shows up on the small map in the corner of the picture.  The map is moveable, but not resizable. It doesn’t really need to be since the map is really only there to provide context to the image moving on the screen. The dots disappear as your subject moves, so you get a sense of movement and direction. Its really very slick.

The key value here is frankly lost on me since I have a fairly good sense of direction and depth. If I watch a video of someone walking around in my front yard, I can tell exactly where they are. This is not the case for everyone. Not everyone is wired to look at a 2D image and pick out exactly where something is going on. The bird’s-eye view and a series of dots showing where motion is taking place givs the viewer a lot more context as to where the action is taking place.

This is one of the top three doorbells you can buy right now.

Just how useful this is ultimately depends on the user. It’s a nice addition, for sure. But is it worth an extra $100? I’m not so sure. I know exactly what Ring is driving at here, and it has potential to be interesting. But I don’t consider it to be a flagship feature, nor a reason to upgrade from a previous generation of doorbell.

Overall, this is the best video doorbell Ring has made. At $250, it’s a little on the pricey side and, as I said in my Arlo Essential Wireless Video Doorbell review, the prices for video doorbells have been trending down lately. This doorbell flies in the face of that. The main reason to buy this doorbell above the original Ring Video Doorbell Pro is for the radar capability. While that does offer some functionality and context to your video, it’s hard to say it definitely adds value, let alone more than $100 of value, to the doorbell.

Fortunately, that’s not all the new doorbell adds. You also get a bump in video resolution and field of view. Putting all that together, it’s easier to see where your money is going. Ring already had one of the best video doorbells out there, and adding to it makes it all even better. It’s not enough of an upgrade from the original Pro to the new one, but if you’re in the market for a new video doorbell, this is one you should consider.

There isn’t a better doorbell out there that uses radar technology, because no other doorbell does. You will get a better field of view from something like the Vivint Doorbell Camera Pro, and you will get better value in the last-generation Ring Video Doorbell Pro if radar isn’t exciting to you. The Arlo Essential doorbell gives you a comparable software experience, but lacks the Neighbors app. Put it all together and this is one of the top three doorbells you can buy right now in terms of the complete package.

The construction of the Ring Video Doorbell Pro 2 is very sturdy. It’s similar to previous generations and has the same operating temperature range and limited warranty. I wouldn’t worry about how this doorbell will hold up. It will last you a while for sure.

Should I buy it?

Yes. This is one of the best video doorbells you can buy today. It’s expensive, but cheaper alternatives cut corners that you may or may not be OK with. If you already have a Ring doorbell, you probably don’t need to upgrade to this one. If you want to save a few bucks, go with the original Ring Video Doorbell Pro. But otherwise, this should be near the top of your list.

6 Creative Home Decor Ideas for Under $50