Becoming mayor of New York City requires submitting oneself to a gauntlet of minor humiliations: being ridiculed for everything from your favorite subway stop, to the way you eat pizza, to the pseudonym you used to sext strangers you met online. On a recent Saturday in Manhattan’s Tompkins Square Park, one-time frontrunner Andrew Yang was experiencing a new one: getting absolutely owned in a game of HORSE by a 28-year-old in a translucent blue unitard and neon hot pants — the rapper Paperboy Prince.

If that weren’t bad enough before they faced off, Yang, already slipping to third place in polls, had to dance gamely as Prince rapped a verse composed for the occasion with the refrain, Yang, you ‘bout to lose. Prince’s campaign for mayor might easily be dismissed as an unserious stunt, but in a field full of stuffed suits — bankers, lawyers, mid-level bureaucrats, ex-policy aides — Prince is a shimmering, kaleidoscopic example of what could be if the fear of mockery didn’t prevent us all from thinking a little bit bigger.

Consider Prince’s vision for New York City. The “Utopia Plan” includes a guaranteed income for all in the form of a monthly cash or cryptocurrency payment of $2,000; “Love Centers” spread throughout the city, where New Yorkers can go to make friends, receive relationship and mental health counseling, childcare and job training; the transformation of the NYPD into a “Love Team”; our crumbling public education system replaced with “futuristic schools”; NYCHA public housing retrofitted into “mansions”; and the implementation of universal health care.

It’s easy to laugh off Prince’s ambitious agenda until you visit the Paperboy Prince Love Gallery in Bushwick. On a Wednesday morning a little after 9 a.m., the line for Prince’s weekly food distribution stretches all the way down the block. Over the next two hours, hundreds of neighbors — low-income seniors, veterans, immigrants, individuals who have struggled with cyclical homelessness — stop by to pick up groceries that Prince has given out every week for much of the past year. 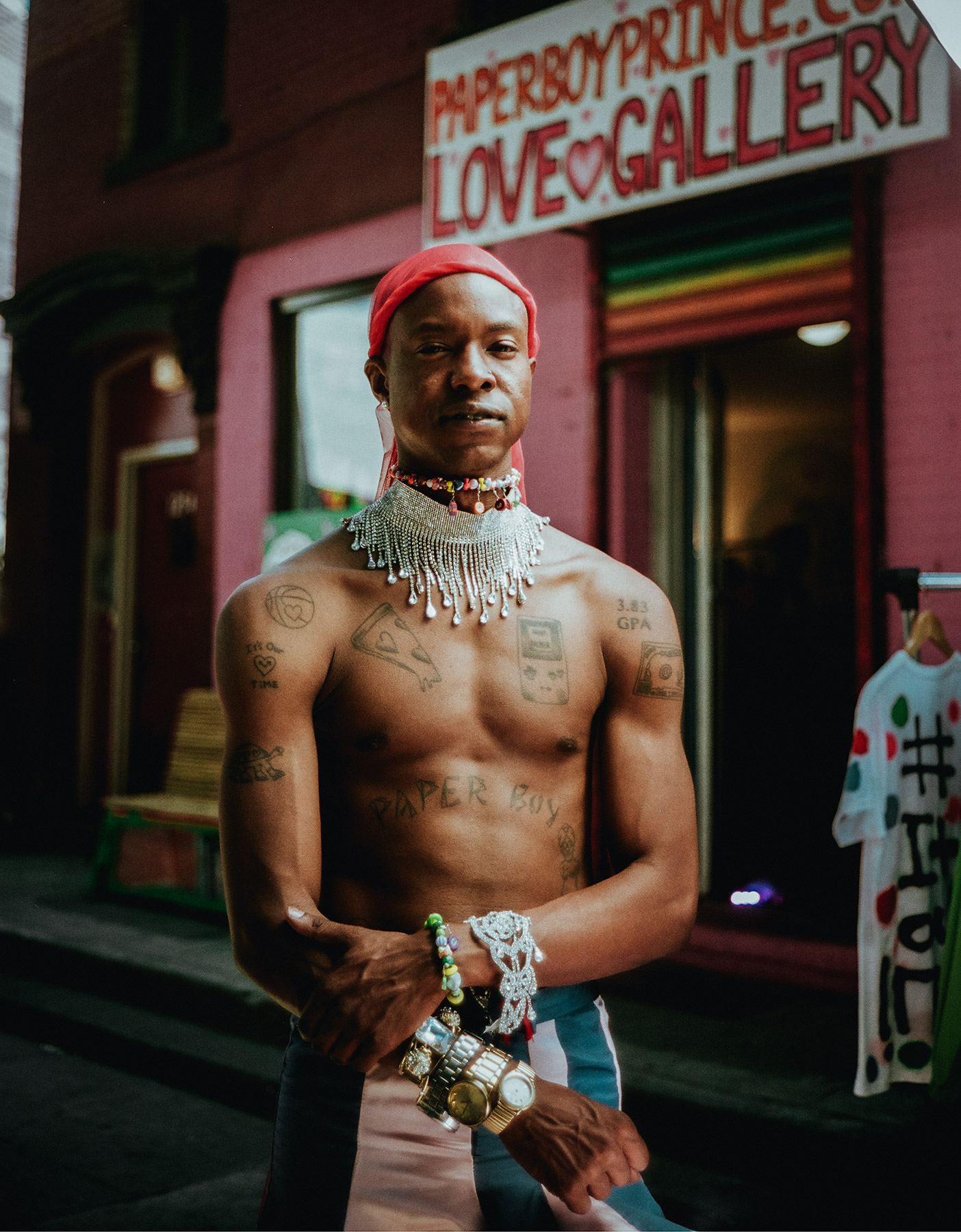 Paperboy Prince in Bushwick, Brooklyn, May 2021.

If you ask Louis Soto, a 69-year-old retired carpenter who has lived in Bushwick for his entire life, minus the three years he spent with the 82nd Airborne Division, Prince is the only mayoral candidate actually doing anything useful for their prospective constituents.

“He’s here, taking care of the community, every Wednesday without fail,” Soto told me that morning. (Prince, who is queer and non-binary, prefers the pronouns “they/them” or “God/Godess” but does not make a point of correcting voters like Soto who may not be aware of the preference.) Soto is holding a bag of pantry staples he’s just picked up from the gallery. “He’s always around asking, ‘You ok?’ ‘You need anything?’ Nobody else is doing that. He’s out here every week giving out food to everybody. The other mayors ain’t doing it. He’s got my vote.”

Charles Albert Travers, 69 years old and originally from Liberia, was proud to help with the signature drive that landed Prince on the Democratic primary ballot. “I put all my intention and work hard and now look — ” Travers points to his leg, which he says he injured while staying in a homeless shelter near Bear Mountain. “Because my intentionality was so strong to help, it started to cure my leg at a faster rate.

“I helped with the campaign, and all these good things happened to me,” Travers continues. “Those places I went to get the signatures? I’m getting work from them! When you are helping with divine intentionality, and have a purpose, you open a magnetic field of nine meters and 30 feet. When you move in waves and particles, you resonate with the divine quantum field of all unpredictability, and possibility, and optimum probability.”

In short, Travers says: “Since I met the king, thing’s been happening!”

Noah Benjamin Phillips, 38, an artist hanging around the gallery that morning, has similarly rhapsodic things to say about the environment Prince has conjured here on Myrtle Avenue. “What do I get from this? Spiritual fulfilment,” Phillips says. “It makes me see things better. I’ve seen a very dark side of humanity the past 20 years… This is giving me a new outlook.”

Prince began distributing the food, which comes to the gallery via a hodgepodge of nonprofits, churches, community groups, and government programs, last year while running for Congress against 14-term Rep. Nydia Velasquez. Prince claims to have earned more votes than Alexandria Ocasio-Cortez in that race, and that isn’t true, but it’s not that far off. (In her 2018 primary upset, Ocasio-Cortez earned 15,897 votes to incumbent Joe Crowley’s 11,761; in 2020, Prince earned 13,946 votes, while Velasquez, the sitting congresswoman, earned more than four times that number.)

Prince was always interested in politics. The eldest of Hope and David Porter’s four children, Prince was born in Silver Springs, Maryland. (“The same hospital Dave Chappelle was born in”) Prince’s parents met as undergraduates at Howard University, and when Prince was a kid, Mrs. Porter helped arrange for the future candidate to spend a summer on Capitol Hill as part of a program coordinated through then-Maryland Rep. Albert Wynn’s office, an experience that helped inform Prince’s political ambitions.

In high school, Prince interned with the Marshal of the Supreme Court, and later went on to study journalism and computer science at the University of College Park, Maryland, where they also performed as the college’s mascot, the Terp. Eventually, Prince ended up in New York, and in 2017, became the first artist signed to Azelia Banks’ label, Chaos & Glory. The pair later toured together. Prince is still writing and recording music, but these days their songs are mostly used as vehicles to get their campaign messages across, tracks with titles like, “Everybody Needs a House,” “More Cops More Crime” and “Redistribute Wealth.”

“The hard part is, there’s no person I can copy off,” Prince says. “There’s no, like, Jay Z of rap and politics to model it off, like: ‘Oh, this is when the song should come out, or this is how many you should do, these are the top issues you should focus on.’ ”

Other than Kanye West — maybe. “And I was running for office before him!”

The 28-year-old had always figured a run for office would come much later in life, but the timetable moved up, Prince says, because “I was super fed up.”

“I felt like no one was talking about the issues that were affecting people,” Prince says. “I felt like the ideas were the same-old, same-old… There is such a disconnect, so many of the politicians who claim to be on our side talking over the heads of people: I’m better than you. I’m richer than you. I’m more educated than you. You don’t know what I’m talking about? You don’t understand this political-speak? Then you don’t deserve my help.” 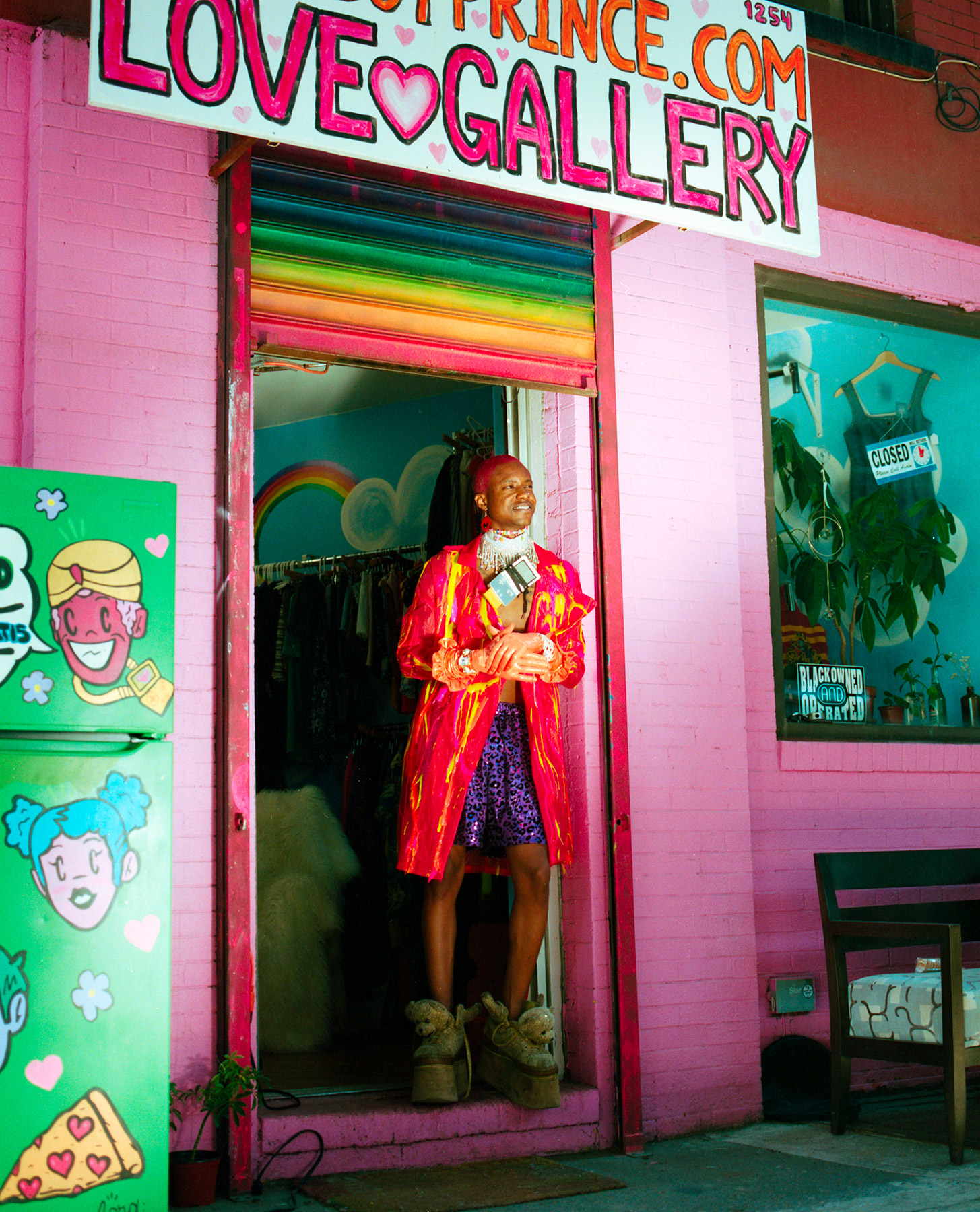 Paperboy Prince in Bushwick, Brooklyn, May 2021.

Through that first campaign, the rapper got to know some of the Democratic groups and local power brokers who offer political endorsements, and though almost none of them threw their weight behind Prince’s bid that year, several later tried to convince Prince to run for the city council opening created when Rafael Espinal, the councilmember who previously represented this district, quit.

The idea to run for mayor materialized instead, Prince says, when they saw a list of the other folks who felt qualified for the job. “I was like: don’t know this person, never seen this person, don’t like this person — oh they’d be a terrible mayor,” Prince recalls. “The funny thing is, they say that I’m, like, a lesser-known candidate. I’m obviously biased towards myself, but I feel like [prior to] them propping up these people — like Kathryn Garcia? In a lot of circles around the city, more people know me than her.”

Later, as we’re sitting inside the Paperboy Prince Love Gallery surrounded by racks of clothing and stacks of nonperishables, folks are wandering in and out, browsing, or looking for food, or offering sheets of LSD. (The campaign wants to stage a “trip out” next month during which attendees plan to drop acid on government property to advocate for legalization.) I ask if it bothers Prince to be called “a ‘lesser-known candidate’ or— ”

“ — A meme candidate?” Prince finishes, before taking a giant bong rip. “It doesn’t bother me. I love it. Because, we’re not dumb. I’m the only one in the race that’s not a millionaire, a billionaire — or backed by them.”

That financial disparity has put Prince at an early disadvantage, though: Excluded from the debates because the campaign failed to meet a fundraising threshold, Prince has been forced to find other ways to attract attention. The candidate has taken to staging pop-up performances while touring the city in the “Love Tank,” a former Dallas airport shuttle donated to the campaign, or doing joint-appearances with higher-profile candidates, like the one-on-one against Yang, which came together after Prince issued a challenge to the then-frontrunner on Instagram.

Prince has been doing a lot of these types of campaign events, whether it’s a dance-off to Bobby Shmurda against Kathryn Garcia before pie-ing each other in the face, or smoking weed not actually with Joycelyn Taylor, but in her presence, or writing a diss-track riffing on the 2011 video of Eric Adams advising parents on how to search their kids’ rooms for contraband. Prince is innovating in other ways, too: in addition to policy advisors and phonebankers, the campaign website is seeking TikTok creators, meme makers, a marching band, cheerleaders, and a mascot to volunteer. Interested parties are encouraged to get in touch via the campaign’s Discord channel.

If Prince’s campaign doesn’t resemble a typical politician’s, it’s because the candidate disdains most politicians, with one exception: South Africa’s Julius Malema, head of the Economic Freedom Fighters. “He’s running a thing called Reclamation Without Compensation: reclaiming that land, taking it back from those people, and you get nothing for it,” explains Prince. “I’m like: I love that… [Some people say:] We want equality, we want the same thing. I’m like: that’s the last thing I want. I want equity. I want everything that you took from me — with interest! You know? Because that’s what we deserve.”

The ideas Prince is championing, meanwhile, are ones that have entered the mainstream debate in many American cities. Universal Basic Income? It worked for Stockton, California. Cancel Rent? Ithaca, New York is giving it a try. Abolish the police? Minneapolis, Minnesota promised to.

Which is another way of saying: Anyone is free to write Prince’s candidacy off, but they may be missing the point. Throughout history, so-called “stunt candidates” have been laughed at before their ideas gained wide acceptance — look at the suffragist Victoria Woodhull, thrown in jail when she ran as the first female candidate for president in 1872, or Benjamin Spock, considered radical when he advocated for the legalization of marijuana, free health care, and the end of U.S. military intervention overseas during his 1972 presidential campaign. Or, to draw from the more recent past, Yang himself, who managed to seriously advance a conversation around  Universal Basic Income during his 2020 presidential bid.

Of course, Prince may get to do all of that sooner rather than later; according to the latest Emerson College survey of the race, the candidate is polling around 1 percent. And, at the end of the day, that’s fine by Prince: “I’d rather have 10 excited votes than a hundred thousand ‘Ugh, OK, he’s better than the other guy.’ ”