Skip to content
Home » Travel » Paragliding In Kerala: A Complete Guide To Fly High In 2021
Travel

Paragliding In Kerala: A Complete Guide To Fly High In 2021

Kerala, one of the most beautiful places in the world that is popular for its coconut tree fringed shoreline, serene beaches, mesmerizing backwaters, majestic Western Ghat ranges, and lip-smacking Malayali cuisine has evolved into an international paragliding destination in the last few years. Vagamon, Munnar, and Varkala are the three destinations in Kerala where one can fly high like a bird and enjoy the aerial beauty of the Kerala. If high altitudes lure you, try paragliding in Kerala. 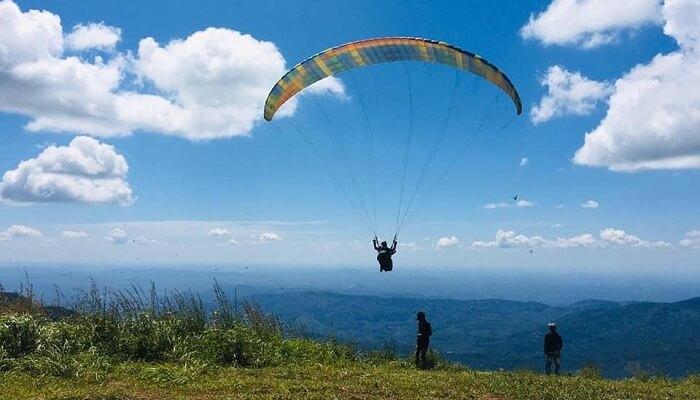 3 Best Places For Paragliding In Kerala

Here is the terrific list of paragaliding spots in Kerala that you must check out before you leave for your vacation. Keep scrolling down and read along! 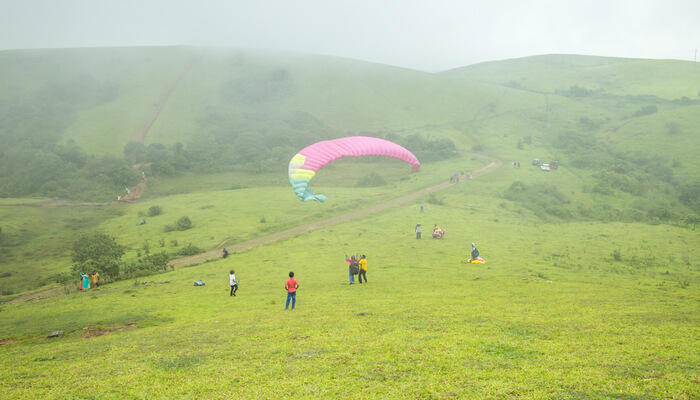 Image
Vagamon is a high-altitude destination in the God’s own country that is located at the border of Idukki and Kottayam districts in Kerala. This cozy, little hill station is bestowed with verdant meadows, tall pine forests, spectacular waterfalls, and lush tea estates. Vagamon has always been a trekker’s go-to place and paragliding is a new adventure addition to this alluring place. The greenery of this place is unmatched and paragliding at Vagamon lets you fill your eyes with such blissful scenery. High in the air through the clouds and mist, paragliding at Vagamon gives you a bird’s view of the astounding valley below. Paragliding points in Vagamon Kerala are very unique as you start and land in the same place after the flight.

The ideal time for paragliding in Vagamon is during the cooler months from October to February when the day temperature hovers around 20 degrees Celsius and nights are cold. During these months, chances of precipitation are bleak and so, if you want to experience paragliding in Vagamon, winters are the best. The second best time is during the summer months of March to May. During these months, the day temperatures are around 30 degrees Celsius and nights are pleasant with temperatures dipping to 23 degrees Celsius. The skies of Vagamon are usually blue and clear during this part of the year too.

Age restriction for paragliding:
People from 14 to 80 years who are physically fit can indulge in paragliding at Vagamon. 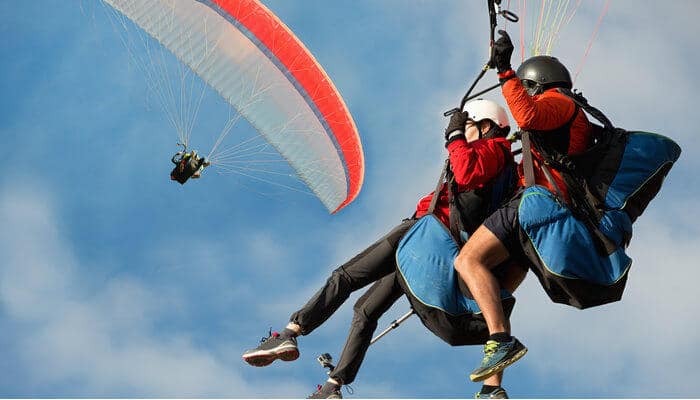 Image
Located at 1600 metres above mean sea level, Munnar is a town perched on the Kannan Devan Hills amidst the Western Ghats mountain ranges in the Idukki district of Kerala. This sleepy little town of Munnar is a hotspot for adventure junkies who love to fly high and enjoy the beauty of the lush greenery below. Paragliding here has been launched recently due to favourable wind conditions and thermal soaring. Paragliding happens from the starting point of Chithirapuram, and after enjoying a thrilling paragliding session, the landing is usually near the Munnar Engineering College.

Age restriction for paragliding in Munnar:
People from 14 to 60 years who are physically fit can indulge in paragliding at Munnar.

Suggested Read: Winter In Kerala: 6 Best Places To Visit For A Blissful Vacation In 2020! 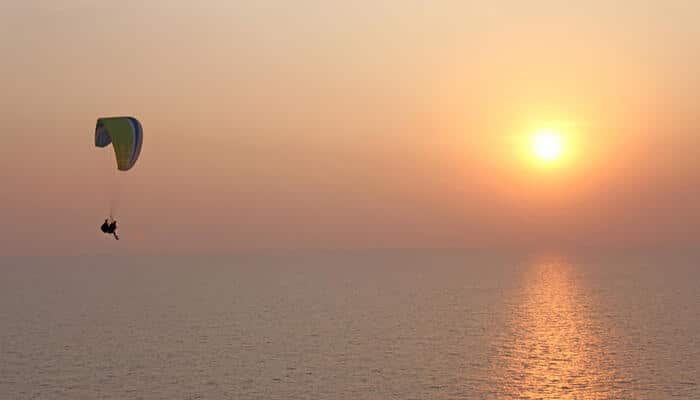 Varkala is a spectacular tropical beach city near Trivandrum. While paragliding usually means flying high in the mountains, paragliding at a beach town is a delightful difference. This seaside paragliding destination starts from a helipad in the North Cliff, and as the pilot takes you on a bird-like journey above the blue waters of the Arabian Sea, you will be be glided back to the helipad or sometimes at the beach.

Age restriction for paragliding:
People from 14 to 60 years who are physically fit can indulge in paragliding at Varkala.

Further Read: 6 Unusual Yet Exciting Things To Do In Ernakulam On Your Next Kerala Trip!

We guess that you are already imagining flying like an eagle over the ravishing landscapes at the God’s own country, Kerala. Plan a trip of Kerala with TravelTriangle and breathe in the crisp mountain air as you enjoy paragliding in Kerala. Give your imagination a real form!

Q. Is paragliding in Kerala safe?

A. Yes, paragliding in Kerala is mostly tandem paragliding and it is absolutely safe even for novices as it is the pilot who paraglides you through the sky.

Q. Are there paragliding sports in Wayanad?

A. No, paragliding in Wayanad is currently unavailable.

Q. Can I experience paragliding in Varkala during my Kerala trip in July?

A. No, paragliding operations are shut in Varkala during the monsoon season from June to September.

Q. Is it safe for pregnant women to experience paragliding?

A. No, pregnant women are not advised to indulge in paragliding.

Q. Is Munnar in Tamil Nadu or Kerala?

A. Munnar is a border town between Tamil Nadu and Kerala and is officially under the administration of Kerala government.

Q. Is paragliding in Kerala expensive?

A. No, paragliding in Kerala is cheaper than many other destinations and usually costs INR 3,500 per person for 15 to 20 minutes.

Q. Is there paragliding in Kochi?

A. No, there is no paragliding in Kochi. However, the city has a lot of adventurous water sports like kayaking, Jet ski ride, and Banana ride.

Q. Do the tandem paragliding pilots in Kerala speak Hindi or English?

A. Yes, most of the pilots are comfortable speaking Malayalam, English, and Hindi.

The post Paragliding In Kerala: A Complete Guide To Fly High In 2021 appeared first on .