Happy Friday everyone. Well, I don’t know about you but with today’s weather, it feels well and truly like autumn has arrived! It’s on with the jumpers and the heating is going on for sure. However, I am taking you back to last spring with this beautiful same sex wedding. Louise and Anna had planned an outdoors ceremony in the countryside, however due to the high winds that day they had to move everything inside, but what a beautiful ceremony it turned out to be. I just love the stunning flowers and draped fairy lights that really made the ceremony super special. The whole day is chilled and relaxed and full of love. Big thanks to MT Studios. for the lovely photos. 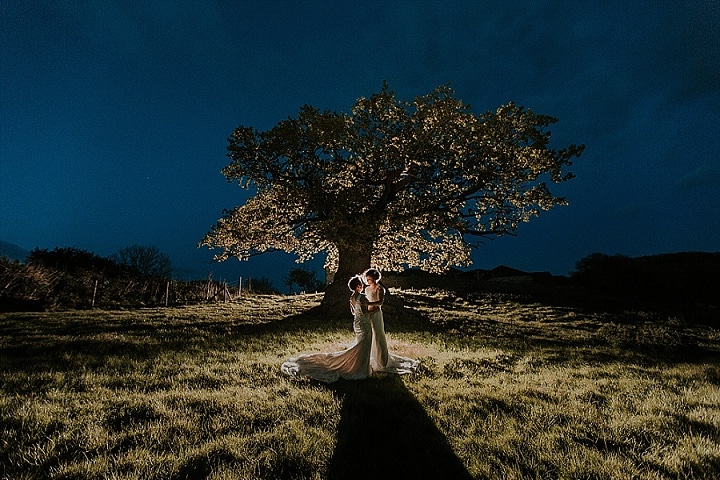 Louise and Anna were married on 29th April 2019 at Folly Farm Centre in Bristol. ‘We are both big fans of the countryside and had done lots of cycling around that area together. With its far-reaching views of the Mendips and its rustic buildings, Folly Farm was the perfect venue for us. We had 115 guests in the day and 30 in the evening, it took 7 months to plan.’

How they met
We first met through a mutual friend over ten years ago when Anna was on a boozy weekend in Dublin (where Louise is from) and met again a handful of times over the years. It wasn’t however until early 2016 that the stars aligned for us and we became a couple.

The proposal
Anna planned a 7 hour hike up a mountain in The Rockies, near Banff, while we were on holiday in Canada. After 4 hours of hiking up the mountain, with Anna singing the whole way up and Louise wondering why she was being so strange, we reached a pass near the top and stopped at a lake to have a rest, a snack and to take in the views. Louise was looking around at the incredible views and when she looked down Anna was on one knee with a small box in her hand. She asked Louise to be her wife and Louise nearly choked on her cashew nuts! It was completely unexpected. But of course as soon as Louise was able to speak again she said ‘I bloody love you, YES, YES,YES! We basically ran back down the mountain smiling from ear to ear.

How did allocate your budget?
The venue (including food and wine), the music and the photographer were at the top of our priority list, so once we had locked in those things, we were happy. We otherwise prioritised the dresses of course, flowers and the food/drink for a pre-wedding celebration the night before, but we made it all work with the budget we had left.

Where did you splurge and where did you save?
We spent a bit more on flowers than we had originally planned but as we had to move the wedding indoors due to high winds on the day it was totally worth it. The flowers, organised by Anna’s Mum, were absolutely incredible and we were very happy with our decision to spend a decent amount on these. We spent a fair bit on music, with a singer/guitarist during and after the ceremony and a band in the evening, but we wanted music to be a big part of our day. We also decided at the last minute to get a videographer, who was great and captured our day perfectly – it is fab to be able to look back at a highlight video of our day.
We are both very hands on people so we were not afraid of a DIY wedding and managed to save on decorations for the venue etc. That is another reason that the venue worked for us so well as it was a blank canvas, with plenty of scope for adding our own touch. We also had lots and lots of help from family and friends who helped us to do this.

How did you choose your photographer?
MT Studio was recommended to Louise by a colleague. We took a look at the website and thought their photographs were the perfect combination of traditional and abstract. Their photos looked completely natural and seemed to effortlessly capture the joy of the occasion. Maciek and Monika were so lovely on the day, putting everyone at ease, and the photos they produced were stunning.

The outfits
We can’t remember the specifics of the dress designers…and we’re not sure if we ever even paid attention to that detail! We kept details of our dresses secret from one another, despite people warning us that they might clash, but they ended up complementing each other perfectly.  Both of our jewellery were special gifts from friends and family.

The bridesmaids
We ordered the bridesmaids dresses from Phase Eight and the ‘Best Boys’ got their suits from Moss Bros.

Theme or colour scheme
We worked towards a blue and pink colour scheme but we were not too strict on it. The bridesmaids’ and the boys’ outfits complemented one another, along with the flowers, but the rest we were quite relaxed on. Similarly we didn’t have a set theme we were working towards, but in hindsight we guess it was a sort of rustic countryside vibe.

Decoration
We had so many fairy lights and candles throughout the entire venue. We also had lots of silly signs and photos of us and family and friends throughout. One of our favourite decorations was a collage of photos we put together. We wanted all of our guests to feel a part of the wedding so the collage included a photo of each guest – some were of nights out with us and there were lots of photos of our guests at their own weddings. Everyone loved finding themselves in the collage.

Food
We kept it simple and had a lovely roast dinner with all the trimmings! This turned out to be a god send as, despite it being a bright and sunny day, there was a gale force wind for much of the day making it pretty chilly, so a roast was the perfect meal to warm us up!

Wedding cake
Anna’s very talented auntie made us a delicious, 3 tiered wedding cake, which was a mix of traditional fruit cake and sponge layers.

Entertainment
Lennon, a solo singer/guitarist during the ceremony and the reception afterwards, played a mix of indie and 60s-90s guitar classics. In the evening we had a band, Miracle Cure, that covered both traditional Irish songs (with half the guests having travelled over from Ireland) and feel good wedding tunes. The band then DJd the night to a close.

Personal touches
As mentioned above re decorations. We also threw a pre-wedding celebration on the Friday night before where we had a barbeque, lots of cake and plenty of wine!

Special moments
One of my favourite moments was when Louise’s Nanny visited her room as she was about to leave it to walk down the aisle, it was emotional. Anna particularly enjoyed getting ready with her bridesmaids, who plied her with the right level of alcohol to get her to the ‘church’ on time whilst making sure she could still walk.
Louise seeing Anna walking down the aisle looking so stunning (and a little nervous).
Louise’s brother wrote and read a reading he had prepared during our ceremony.
The speeches were great. Anna’s brother, Ross, ended the speeches with an ‘interactive’ speech that involved a drink-off (with German steins), a balloon fight and a good ole sing a long.

Advice for other couples
Enjoy it, take it all in, everything will fall into place even if there is a wind storm on the day! It shouldn’t be stressful, it should just be good fun from start to finish.
Everyone that attends your wedding will have a blast, and will not notice all the little things that you know about that haven’t quite gone to plan on the day.

Biggest surprise
Probably Ross’s (Anna’s brother/’best boy’) speech as mentioned above – Anna was certainly not expecting to have to wear a bib and down a stein of beer in a wedding dress! Thankfully it turned out to be non-alcoholic, otherwise the night could have ended swiftly! Otherwise we’re not sure if there were any massive surprises, we just had such a fun time. Everyone looked so pretty and smart!

Best Tips to Pull Off the Best Home Wedding