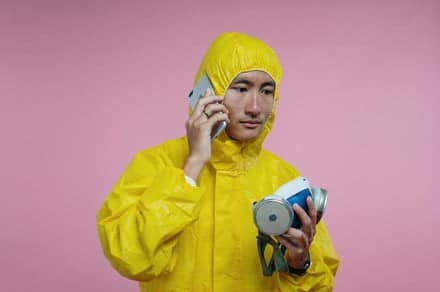 Cell phones do produce radiation, even if it’s quite limited. They use radiofrequency energy, which is a type of electromagnetic radiation. In general, the amount they put out is below the FCC’s safe limit, but some models output more RF energy than others.

How to reduce exposure to cell phone radiation

1. Use hands-free and text messages wherever possible

Assuming that cell phone radiation is something you want to avoid, holding your smartphone up to your ear and speaking to friends for hours at a time is a big no-no.

Instead, use speaker phone or earphones. That way, you’ll be able to place your phone on a table or surface while still continuing to have a conversation. Or better yet, use your landline to call, if you have a landline phone.

In addition, send text messages instead of calling. Obviously, certain things need to be discussed in a conversation. But if you have something to say to a friend or family member that can be communicated via a text message, send a text message. You’ll also most likely save time.

And if you have to speak without using speaker phone or earphones, try to reduce the amount of time you spend talking.

2. Carry and keep your smartphone away from your body

Keeping your smartphone against your body is not the best thing to do if you want to reduce your exposure to cell phone radiation. So instead of walking around with your smartphone in your pocket, put it in your handbag, bag, or backpack.

See also  What frequency is 5G? All the different 5G ranges, explained

Basically, carry it somewhere away from your body. For example, if in a car, put it in the glove compartment. If at home or work, put it on a table or desk.

3. Avoid using your phone when it has a low signal

If you’re in an area with a poor signal, wait until you move to an area with better reception before calling someone, if you can. Alternatively, send a text rather than call.

Likewise, if you’re in a car, bus, or train, try to avoid using your smartphone. Again, this is because your phone emits more RF energy as it tries to maintain a connection with nearby cell towers.

Lastly, when waiting for your call to connect, avoid holding your smartphone to your ears. This is because your phone emits more RF energy when making the initial connection.

4. Don’t sleep with your phone

A good way of reducing your exposure to cell phone radiation is to keep your phone away from you when you sleep. This means either switching it off completely or keeping it on airplane mode.

Alternatively, if you need to keep your smartphone connected (perhaps because you’re expecting a possible call in the night), put it somewhere on the other side of your bedroom.

Either way, don’t fall asleep with your smartphone still connected and in your bed.

5. Be careful when streaming

If you tend to stream movies or music on your smartphone regularly, it may be a better idea to download your media first, and then watch or listen once the download has finished completely. In addition, it’s safer to put your smartphone in airplane mode when you’re watching a film or TV program or listening to music.

6. Be cautious of “shielding” products

You might see some “radiation shield” or other “shielding” products that claim to block RF energy, electromagnetic fields (EMF), or cell phone radiation. However, the U.S. Federal Trade Commission has in the past warned that there’s no evidence these products reduce your exposure to radiation emissions.

As a matter of fact, the FTC has indicated on previous occasions that any product that interferes with the cellular signal from your smartphone may require it to emit higher levels of RF energy to make up for it. This strain would end up increasing your exposure levels rather than decreasing them.

Despite this, a small number of manufacturers have been able to develop cases and reduce radiation emissions. FCC-accredited labs tested these cases, which is a strong indicator that the products do what they say. DefenderShield and SafeSleeve are a couple of examples. Both cases have been formally tested and offer some protection from radiation emitted by your smartphone.

Even if you do buy one of these phone cases, we still strongly recommend that you employ the other safety measures outlined above. These steps will help you keep minimizing your exposure.

Remember, cell phones give off minimal amounts of radiation and are not a massive cause for concern. Some phones, though, are worse than others in this department. RF energy has been proven detrimental to health, so it makes sense to implement a few common-sense changes to lower your radiation exposure if you can.