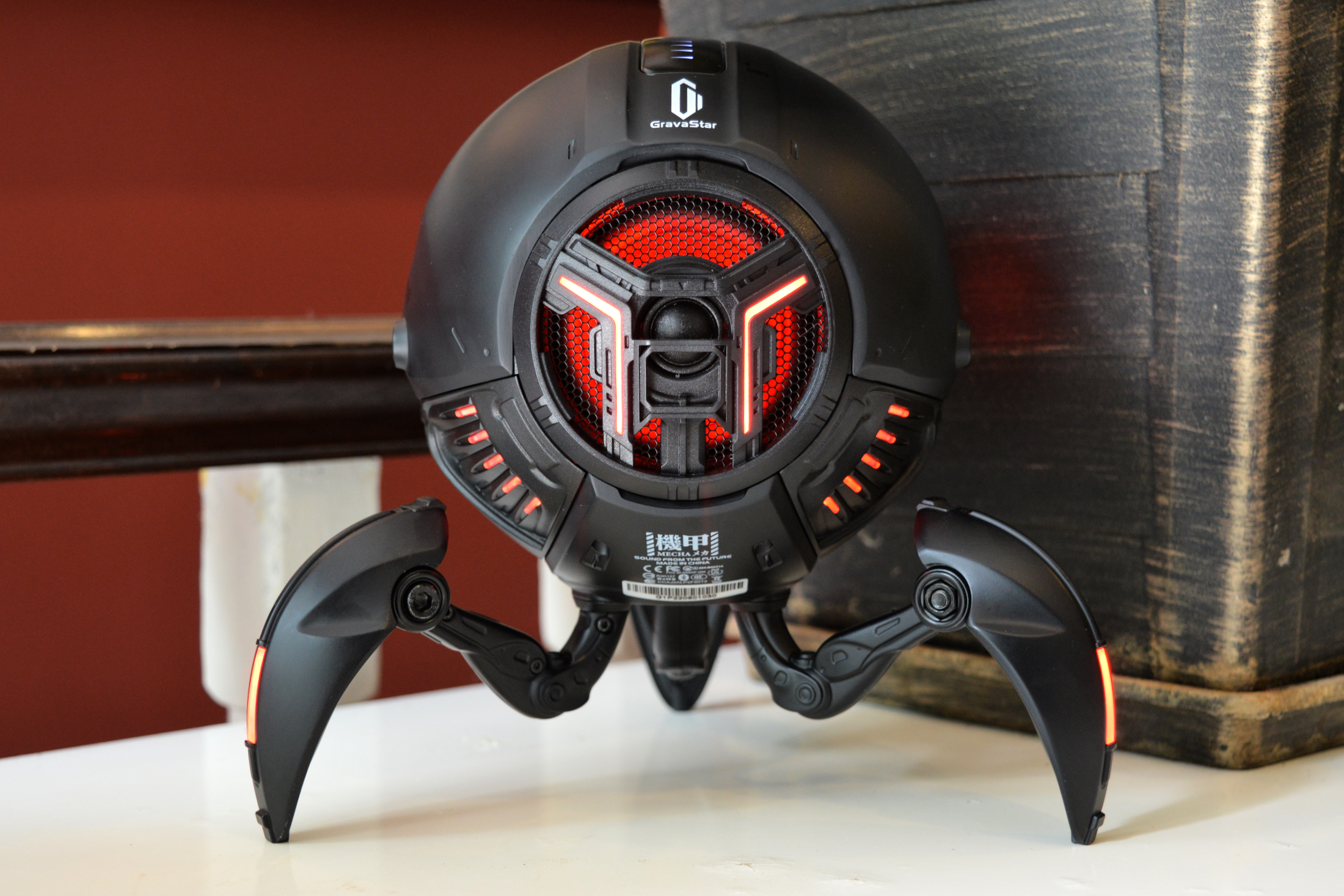 There is plenty that companies can do to make their portable Bluetooth speakers more appealing. They can dress them up in retro rock’n’roll garb like the Marshall Emberton II, they can make ’em tough and waterproof like the JBL Flip 6, or they can load them up with voice assistants and multiroom Wi-Fi connectivity like the Sonos Roam.

But let’s agree that if you really want to stand out from the crowd, your Bluetooth speaker needs to look like a mechanical spider from outer space, complete with color-changing LEDs. I can only be talking about one Bluetooth speaker: the Gravastar Mars Pro.

It’s all about the mecha

If you’re going to question why a Bluetooth speaker needs to look like it just escaped from the MechWarrior video game franchise, or why it might also bear a passing resemblance to DOR-15 from the Disney’s 2007 animated feature film, Meet the Robinsonsjust stop reading. I mean, you might as well be asking why Doc Brown decided to build a time machine out of a DeLorean.

So let’s skip past the why and get right into the wow. Gravastar has created a gorgeous conversation piece in the Mars Pro, which starts at $230 for the matte black or white paint job, and then quickly jumps as high as $350 for the Shark 14 Special Edition, which bolts a shield and dual gatling guns onto the speaker’s sides. I especially like the War Damaged Yellow version.

The detail and craftsmanship are top-notch and so are the materials. The main housing uses two zinc alloy shell pieces — one large shell that totally covers the top hemisphere, and a smaller one that provides the structural support for the tripod legs — and the rest is high impact plastic. At 7.5-inches tall, and with a 7-inch spread between the points of each leg, it’s not massive, but at 5.55 pounds, it has some serious heft.

The body and legs are adorned with exposed metal bolts, and the legs are partially articulated — the talons can tuck themselves under the lower leg segment for a more compact shape. But as cool as the Mars Pro’s body may be, it’s the LEDs that steal the show.

Gravastar says there are six in total, and maybe that’s the number of actual LEDs it used. But if you count the number of individually lit areas, it’s as high as 17. They’re color-changing, too: You can pick from a menacing red, a high-tech green, two friendly shades of blue, a warning-sign amber, or a psychedelic purple. And if you can’t decide, there’s a mode that continuously cycles through all of them, and another mode that makes them pulse in time to your tunes.

My only criticism of the design is the labeling, which sits on the portion of the belly that faces forward. If the speaker sits below shoulder height — say on a desk, beside your monitor — you may not notice it, but I think Gravastar should have tried to hide it a bit better.

On the very bottom is the USB-C charging port, which conveniently doubles as an analog line-in port. In the box, you get both kinds of cable: USB-A to USB-C for charging, and USB-C to 3.5mm headphone jack for external sources. Unfortunately, there’s no way to pipe digital audio into the Mars Pro from a computer or phone using a USB cable.

Hidden around the back, out of sight, are three small control buttons. One for Bluetooth pairing, one for power and play/pause, and one to change the LED light mode. An LED-lit volume strip runs along the top of the shell, like a flattened mohawk, and you can tap anywhere along its length to adjust the level. The only thing missing is a way to track skip.

While there’s no question that the design of the Mars Pro is otherworldly, its sound quality is decidedly down to earth. Which is not to say that it’s bad — in fact, it sounds very good considering its size — but it’s also pretty clear that you’re paying mostly for the speaker’s looks, and not its sound.

Gravastar says the two-way speaker (a front-facing tweeter positioned directly in front of a woofer, with a passive bass radiator facing the back) is rated for 20 watts of power, but this is a bit deceiving. I had trouble getting the spherical spider to pump out anywhere near the volume of a Marshall Emberton, which has an identical power rating, probably because the Emberton uses two full-range drivers and two passive radiators — a more efficient design. Plug it into an analog source and the maximum volume drops even further.

There’s nice clarity, especially in the higher frequencies, and that bass radiator helps the Mars Pro sound full and grounded. The midranges are decent, with good detail, but when distortion creeps in now and then, this is where you’ll hear it.

Because of the coaxial layout of the two drivers and its very small circular grille, the sound is highly directional. Any off-axis listening definitely loses some fidelity. Sit the spider in front of you and aim its glowing aperture and your head and you’ll be fine, but exit that sweet spot, and there’s a rapid drop off in clarity.

I found myself wondering what kinds of tweaks I could accomplish if I had access to some kind of EQ adjustments. But, unfortunately, there’s no companion app for the Mars Pro, so you can make no adjustments of any kind — including firmware updates should any be needed.

Because of its gaming-inspired looks, you might be tempted to think of the Mars Pro as a gaming speaker. But if that’s your intended use, you’ll need to stick with its wired connection. On the wireless side, you get a choice of SBC or AAC codecs, but neither of these are especially good for latency, with up to 300 milliseconds of lag, and Gravastar doesn’t offer a low-latency mode.

Still, if you’re looking for a way to enjoy your tunes out loud, instead of relying on your computer speakers, or your phone’s internal drivers, the Mars Pro is a perfectly capable companion. If you have the cash, and like a little symmetry in your life, you can pick up a second Mars Pro and turn the two units into a stereo pair. I didn’t get a chance to try it, but given how directional these speakers are, it could sound really fun.

I’m assuming that one reason the Mars Pro has so much heft is that it must have a big battery inside that orb of a body. Gravastar says you can expect about 15 hours of life on a single charge, but presumably that number will vary depending on your use of the LEDs and the volume level.

Trouble is, there’s no easy way to tell how much battery life is remaining, especially if you use it with the optional analog line-in cable, as this automatically disables the Bluetooth connection.

Worth it for those who love it

Is the Mars Pro worth its $230 price? As a speaker, no. You can definitely get better, bigger, more rewarding sound from other Bluetooth speakers for less money. But you cannot — must not — judge this spider from Mars on its audio chops alone.

So much effort has been put into making this device so much more than a speaker, that for a lot of folks, even if you just plugged it into power and left the LED lights on all day, the Mars Pro could almost justify its cost on that alone. Speaking of that, Gravastar sells a $60 charging base, with its own set of LED lights — perfect for maximizing the eye candy factor.

So if you dig the mecha-sci-fi vibe that this speaker puts out, I think you can rest easy knowing that even though it might not provide top-notch sound, the Mars Pro is a totally unique, beautifully crafted accessory that will give you a planet’s worth of pride of ownership every time you look at it.