If you’re an ice cream aficionado, you’ve probably encountered Van Leeuwen Ice Cream, available online and in stores nationwide. Chances are you’ve also heard about the company’s latest internet-breaking flavor: Kraft Macaroni and Cheese. This past July, people took to social media to share their “over the moon” excitement, and despite some users expressing reservations about the unconventional combination, the limited-edition pints sold out in an hour.

Ben Van Leeuwen, who started the company with co-founders Pete Van Leeuwen and Laura O’Neill in 2008 out of a butter-yellow truck in New York City, has been passionate about experimenting with flavor from the beginning. Some of the company’s most popular options include Honeycomb, chock full of caramel candy rather than honey like you might guess, and Earl Grey Tea, which boasts organic Rishi Tea hand-harvested in the centuries-old tea tree forests of the Yunnan province of China.

That last one caught my eye a couple of years ago at the Westside Market a few blocks from my apartment. I love a good London fog (Earl Grey tea, milk and vanilla syrup) and expected the black tea and citrus to pair well with the creamy base. Those expectations were exceeded when I tried the first spoonful and found the Earl Grey flavor well-balanced and sweet — no lingering bitterness or strange aftertaste like you might expect from an ice cream that gets its primary flavor from black tea leaves and bergamot oil. 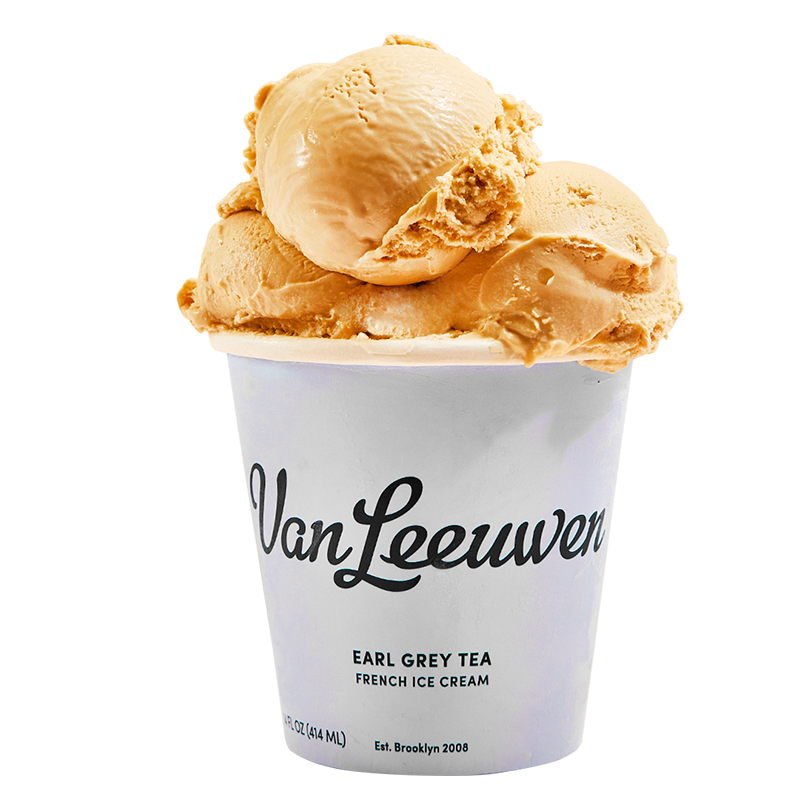 Naturally, I was excited when I had an opportunity to speak with the master flavor creator himself and continue my ice-cream-tasting journey, which, courtesy of Van Leeuwen, involved an assortment of classics like Vanilla, Chocolate and Sicilian Pistachio, and original standouts like Honeycomb and Oat Milk Brown Sugar Crunch (Van Leeuwen offers an extensive vegan line).

Although each flavor satisfies a different craving, they all reflect Van Leeuwen’s commitment to the “good stuff” — simple ingredients with names you can actually pronounce. Ben Van Leeuwen notes that the brand doesn’t use stabilizers or even “natural flavors,” those clear, lab-made liquids with an artificial taste.

But just as important as flavor — if not more so — is the ice cream’s texture itself. Van Leeuwen and I started our discussion with a deep dive into what gives Van Leeuwen ice cream its creamy, toothsome texture. The secret? Egg yolks.

Related: Van Leeuwen’s CEO on The Viral Mac and Cheese-Flavored Ice Cream: We’ve Been Blown Away by the Response So Far”

“The reason we use so many egg yolks is because it changes the texture,” Van Leeuwen says. “So it gives an incredibly thick, toothsome texture. When you’re making ice cream, you’re using cream, which has a lot of fat, and that will give you creaminess, but the cream won’t give you the toothsomeness; the egg yolks give you the toothsomeness. So it emulsifies and gives the product a little bit of solidness and chew, and we love that.”

Most ice creams on the market don’t contain more than 1.3% egg yolk, and those that do must be labeled “French” or “custard.” Van Leeuwen’s ice creams range from 5% to 8%, earning it its “French” designation.

The high egg-yolk content was a very conscious decision, one the co-founders arrived at about 15 years ago when they were still experimenting with texture at home. “We made ice cream out of cookbooks like On Food and Cooking by Harold McGee and Thomas Keller’s books, and they all had a ton of egg yolks,” Van Leeuwen says. “We tried those crème anglaise, sort of classic vanilla ice creams, and we were like, ‘Oh my gosh, this is so different,’ so much better than anything we were having on the market. So we said, ‘Why can’t we do this at scale?’”

The trio first attempted single-note flavors, which would ensure the texture took center stage and allow them to get it just right. Some early experiments included pistachio, ginger, Ceylon cinnamon, vanilla, chocolate and strawberry. “Starting with these very simple flavors forced us to obsess over the texture,” Van Leeuwen says. “So without inclusions, when you’re eating, you’re only going to think about the texture and the flavor and how that single ingredient is coming through.”

Having tried Van Leeuwen’s vanilla, chocolate and pistachio flavors, I can attest to the early experiments’ success first-hand. Not only do the top-quality ingredients — think cold-ground Tahitian vanilla beans, Michel Cluizel’s ultra-high cocoa butter chocolate, and pistachios d from the slopes of Mount Etna in Sicily — give them a rich, authentic flavor, but the consistency is also on another level: smooth and thick with the solidity Van Leeuwen mentions, that almost-chew. 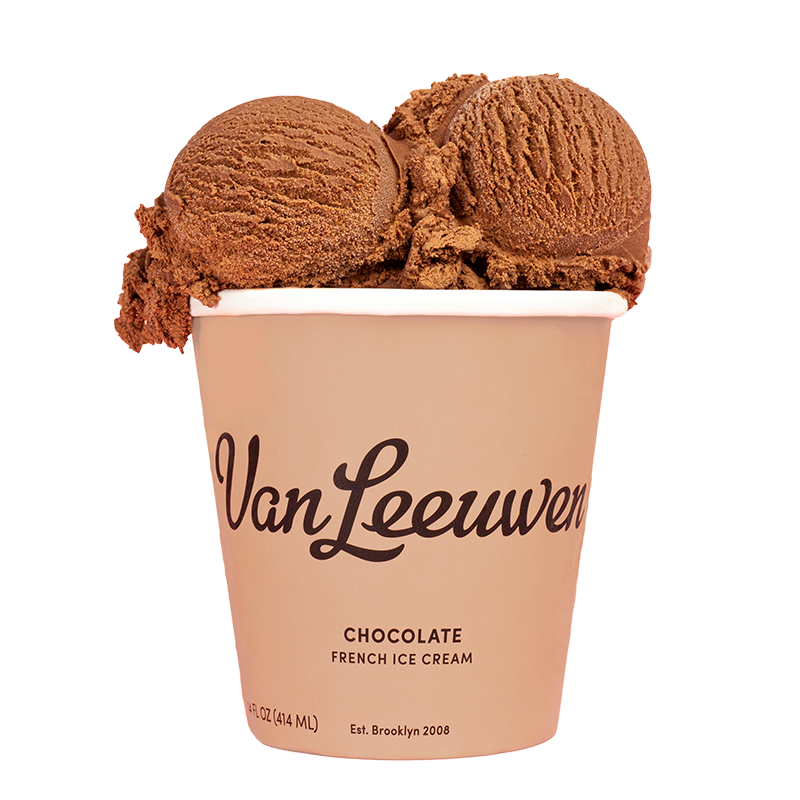 “We discovered that particularly our market in the U.S. loved having chunks in their ice cream”

Soon Van Leeuwen was ready to try his hand at more unorthodox flavors. “One of our first out of the ordinary combinations was a turmeric ice cream with heritage coconut sugar shortbread sandwiched with house-made coffee caramel,” Van Leeuwen says. “We got organic turmeric, we peeled it in-house and blended it entirely into what we call the vegan custard, which is coconut, cashews, cocoa butter, the fat from chocolate and coconut oil. So it made this brilliant yellow color.

Although people might not have found turmeric ice cream as off-putting as it might have initially sounded to them, the unique combination was ultimately a flop, and vanilla out-sold it. But sometimes, Van Leeuwen admits, a flavor is simply better in theory than in execution. Van Leeuwen counts licorice, tarragon and a peach habanero sorbet, which his co-founders told him tasted like salsa, among his flavor failures. He also reveals that flavors that incorporate nuts and caffeine are generally harder to move.

But early stumbling blocks were no match for the Van Leeuwen team’s desire to put out flavors that defy — and exceed — customer expectations. And, despite bringing numerous novel flavors to market, there is one key element that’s oft-repeated in Van Leeuwen’s creations.

“We discovered that particularly our market in the U.S. loved having chunks in their ice cream,” Van Leeuwen says. “When there’s chunks in the ice cream, you’ll start eating, and you’ll get a chunk, and you’ll be like, ‘Okay, I’m going to keep eating until I get one more chunk.’ And then you’ve eaten the whole pint. So we thought we could sell more ice cream by adding chunks.”

The chunkiest flavor I tried happened to be the Oat Milk Brown Sugar Crunch, which folds cookie dough, brownies and candied oat clusters into an oat milk muscovado brown sugar base. Delicious to be sure, and although it doesn’t have a creaminess-factor identical to that of its dairy counterparts, the coconut cream and oil give it its own distinctive one — with a nutty sweetness that helps the mouth-watering mix-ins pop.

Related: How the Founders of Van Leeuwen Ice Cream Broke Through With an Unfamiliar Product

“It’s doing things that sound pretty basic, but doing them the best way possible, not only with the best ingredients, but also with no unnecessary ones”

While Van Leeuwen always strives to think outside of the pint (he’s currently toying with the idea of a fermented green tea flavor with jasmine ice cream and cardamom biscuits), there’s of course always a more practical marketing angle to consider as well.

“Step one is figuring out what’s going to sell,” Van Leeuwen says. “So, peanut butter, fudge, cookies. But then if we say, ‘Okay, we’re going to make peanut-butter-fudge-cookie ice cream,’ it’s how do we make the chocolate that we’re using super distinct? And that means sourcing. Small farms in Ecuador and getting that sort of earthy flavor of the chocolate, which we think can pique people’s palates a little bit and excite them with something they haven’t had. And getting only Virginia peanuts. So it’s doing things that sound pretty basic, but doing them the best way possible, not only with the best ingredients, but also with no unnecessary ones.”

Van Leeuwen’s brand collaborations allow the ice cream company to come up with some of its most attention-grabbing flavors — just as the partnership with Kraft did earlier this year. When the mac-and-cheese company approached Van Leeuwen with the idea, he saw the potential for massive success.

“My initial reaction was this is going to be absolutely awesome,” Van Leeuwen says. “People are going to get super excited about this, but we’re going to need to make our own blend because I doubt they’re labeled as clean. So I immediately looked at the label, and I was so surprised and excited that it was a completely clean label.”

Though Van Leeuwen recognized the Kraft flavor’s potential to break the internet — which it subsequently did (there were even reports of the site crashing due to the high demand) — he also had enough flavor-experimentation experience to know that pairing Kraft’s cheesy macaroni flavor with Van Leeuwen ice cream was a wise decision.

“We knew it would work really well in ice cream,” Van Leeuwen says. “And then we tested it immediately, so that was confirmed. People think it sounds super strange, but cultured milk, which might be cream cheese, might be sour cream, is really good in ice cream. It’s not a shocking, weird thing. So it’s basically like cream cheese ice cream, which are our cheesecake bases or crème fraîche ice cream, which taste awesome.” 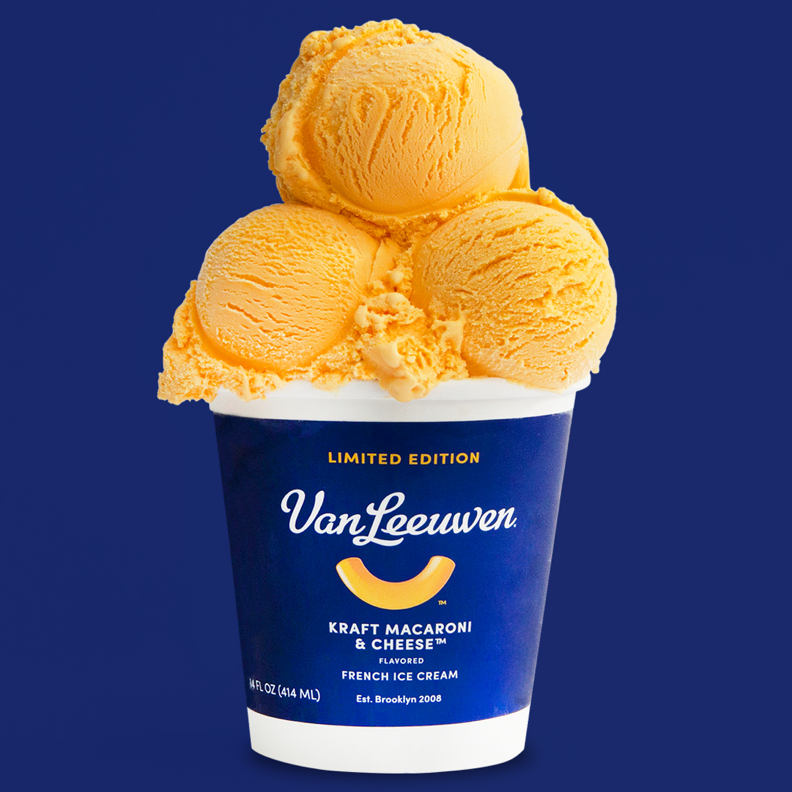 Van Leeuwen also takes part in monthly collaborations with local brands, which in the past have included Wölffer Estate Winery for a Vegan Raspberry Rosé Sorbet, Kettl Tea for Matcha Green Tea and Kings County Distillery for Bourbon Cherries Jubilee.

“Renovation is constantly challenging our processes and recipes”

Innovation is always on the table at Van Leeuwen, but even when the brand seems to strike flavor gold, like it did with its bestseller Honeycomb, for instance, the team never stops considering how it might make a great flavor even better. “There’s innovation and there’s renovation,” Van Leeuwen says. “Innovation is creating new flavors. Renovation is constantly challenging our processes and recipes. Maybe 10 years ago, people liked mild chocolate; maybe now they like more intense chocolate.

“So that’s part of R&D that isn’t as exciting sounding,” Van Leeuwen continues, “but it’s really, really important to constantly say, ‘Is the way we’re making the Honeycomb the best way, even though it’s our bestseller and people love it? Can we make it even better? Can we cook the custard at a slightly better temperature? Or are we able to cut the sugar a little bit?’ So things like that are a big part of the creative process too, even though they don’t sound as creative.”

At the end of the day, Van Leeuwen Ice Cream just wants to keep its customers happy and coming back for more. I, for one, definitely will be.

“The objective is making really yummy stuff that people want to eat,” Van Leeuwen says. “And I think as we become more and more experienced with ice creams, because that’s what we do, we try to remove our ego from the process of innovation. It’s more important to make really yummy stuff than to try to be interesting.”