Downsize the Home, Grow the Business


This story originally appeared on NerdWallet

In this series, NerdWallet interviews people about their journey to tame debt. Responses have been edited for length and clarity. 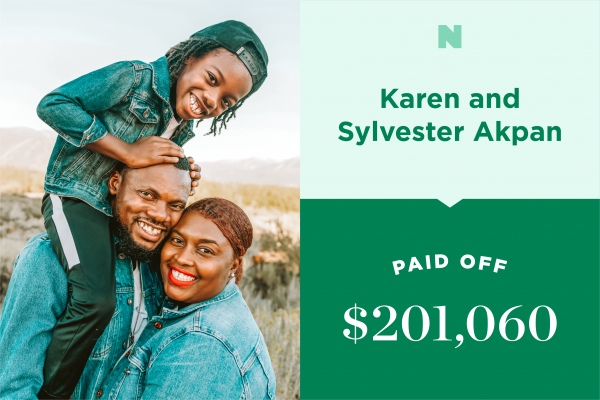 Karen Akpan lost her high-paying contract in clinical research in 2019. She and her husband, Sylvester, had no savings and made an estimated $50,000 gross annual income through their travel blog’s Instagram. But that income just wasn’t enough to cover their $4,300 monthly mortgage payments — or to put a dent in their six digits’ worth of debt.

So they made a few bold moves.

In early 2020, the Akpans sold their house and bought an RV. Then they focused on making more money through Instagram. Within a year, they were able to pay off their debt.

While the Akpans’ path was unconventional, it points to a truth that’s hard to dispute: Lowering expenses and increasing income leaves more money to tackle debt.

‘We were up to our necks’

After the job loss, “we were up to our necks,” Karen says. “We were living to pay bills.”

The Akpans were late on mortgage payments for their house north of Los Angeles and were leaning on credit cards. Karen and Sylvester also faced about $110,000 in student loans and owed more than $90,000 for their car, timeshare, taxes and other debts.

When Karen and Sylvester sold the house they’d lived in with their son Aiden for four years, much of the proceeds went toward paying off some non-student-loan debts — their $36,000 pool and $25,000 solar loans. Between those payments and their agent’s commission, they ultimately landed with about $20,000.

“We literally used our last dime to buy an RV on Facebook Marketplace and fix it up,” Karen says. “It was a leap of faith. I just believed that everything would work out.”

Aiden, who’s 8 and homeschooled, was fine with living in the RV. “He’s basically living his dream right now,” Karen says. Sylvester was a harder sell but eventually came around. According to Karen, “he’s all things RV now.”

As soon as the Akpans moved on, “everything changed for the better: our relationship, our marriage, our family dynamic,” Karen says. “Being in that small space and making it work together was the best decision we ever made.”

‘The money just started coming in’

Next, the Akpans focused on making more money through their blog, TheMomTrotter.com, and its Instagram account that covers budget traveling, homeschooling and parenting. While Karen had been blogging for about four years, she had yet to make much money from it. So she focused on creating more appealing content.

She was able to increase the rates she could charge brands, and eventually, brands started reaching out to her. Representatives from the YMCA, for example, asked her to promote its summer swim program on her Instagram page. Then she “created content for the YMCA that pulled from my personal experience and that my audience could relate to,” she says.

She’s partnered in this way with brands such as Nature Valley, National Geographic, Disney Products, Affirm, Crate & Barrel, Circle K and Camping World. The Akpans also brought in cash through YouTube and freelance writing, but about 80% of their income came through branded Instagram content.

Speaking of income, remember how Karen and Sylvester grossed about $50,000 through their blog and Instagram in 2019?

“The money just started coming in,” Karen says, “Sometimes I don’t even understand how it happened.”

‘I should have invested that money’

While she was excited to pay off these loans, Karen also had misgivings — and still does. “I should have invested that money,” she says.

When her family paid off their loans, Karen says she was just beginning to learn about money. Now that she knows more, she says she would have put much of their earnings in a brokerage account while making gradual loan payments.

To be fair, the decision to pay off student loans or invest is a tricky one. It pays to compare your loans’ interest rates against what an investment would earn, among other considerations.

These days, the Akpans continue making money on Instagram, homeschooling and traveling locally in the RV, wherever the weather is best. They spent the colder months in Florida and have been working their way up the East Coast this summer. (When NerdWallet connected with Karen in July, the family was in Maryland.)

The Akpans also try to travel internationally once a month, depending in part on the cheap tickets they can score. Their next big trip is to Kenya.

The family is also still paying down debt. Last summer, they paid off their $6,500 car loan. And just recently, they paid the remaining $18,103 they owed on their timeshare and $5,527 they owed the Internal Revenue Service. Next up, they’re negotiating a payoff amount on some credit card debt.

If Karen regretted not investing last winter, she and her family are doing what they can now to plan for the future. Karen and Sylvester regularly contribute to brokerage accounts, as well as Roth IRA and 401(k) accounts. Aiden is on the payroll, too, with his own custodial IRA.

Aiden receives more than retirement savings — he gets intel, too. His mother moved to the U.S. alone at age 14 from Cameroon and didn’t get a chance to learn about personal finance while living with extended family. So she’s making sure her son is informed. “If you asked him what an index fund is, he could explain it to you,” Karen says.

How to ditch your own debt

Housing typically eats up a huge chunk of a household budget. That was certainly the case for Karen, who says she and her family used to be “house poor.” While she doesn’t recommend the RV life for everybody, Karen suggests looking for ways to cut housing expenses. Could siblings share rooms in a smaller home, for example? Is there an area with a lower cost of living to explore?

Not everyone will be able to downsize or multiply their income. If you’re facing debt, consider one of these strategies:

Keeping an emergency fund can also prevent you from taking on more debt when you face a large, unexpected expense. Aim to start with $500 in a savings account. Ideally, you’d contribute to it regularly so that you could cover three to six months’ worth of living expenses.

One last piece of advice for navigating the ups and downs of paying off debt: “Have grace, and take it easy,” Karen says. “ Do what you can, and forgive yourself for the mistakes you made.”

The article How I Ditched Debt: Downsize the Home, Grow the Business originally appeared on NerdWallet.