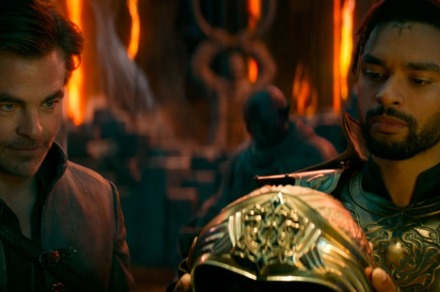 After a three-year hiatus, Comic-Con has returned to the San Diego Convention. And so far, the hottest item isn’t an exclusive action figure or statue. It’s the wristband that indicates whether fans have been vaccinated or tested for COVID-19. Even pre-pandemic, Comic-Con crowds made it difficult to get into the convention center. But this year, the longest lines are for the COVID wristbands, and it created havoc as fans tried to make their way inside.

There’s no way to talk about this year’s Comic-Con without addressing COVID. It’s the reason why everyone has to wear a mask this year, even if you aren’t cosplaying. The pandemic kept Comic-Con dormant in 2020 and 2021, and there are signs that not everyone is ready for the show to go back to what it used to be. For example, the panelists for The Rookie and Abbott Elementary didn’t make the trek to San Diego at all. Instead, they appeared remotely. To a certain extent, that’s understandable. Those shows are in production and there are COVID protocols in place. But their presence at Comic-Con brings up another issue, because in my opinion, they don’t belong here at all.

Abbott Elementary is just a sitcom, and the only reason The Rookie is at Comic-Con is because series star Nathan Fillion headlined the sci-fi show Firefly two decades ago. He’s been riding that Comic-Con good will ever since. Those shows aren’t the only non-genre programming to come to Comic-Con. But if being in San Diego was truly important to them, then the cast would have been here in person.

Contrast those remote appearances with the rock star reception received by the cast and directors of Dungeons & Dragons: Honor Among Thieves. There were no remote appearances here for the first big Hall H panel since 2019. Chris Pine, Michelle Rodriguez, Sophia Lillis, and Regé-Jean Page seemed to have the experience of Comic-Con pros, while the addition of Hugh Grant was a genuine surprise. Grant is playing the villain in Honor Among Thievesand the accompanying trailer offered some tantalizing glimpses of the dynamic between the group of thieves who have to step up and confront his evil.

Now that’s the reason we come to Comic-Con. It’s the rare chance to see genuine stars in person, as well as exclusive footage and trailer premieres. The Wrap openly questioned whether Comic-Con still matters to Hollywoodsince some studios are sitting out of this year’s convention. It’s true that buzz at Comic-Con doesn’t always translate into box office or ratings. But if Comic-Con wasn’t important, Hollywood wouldn’t be foisting Abbott Elementary and The Rookie on us. I’ve been going to Comic-Con for decades, long before the Hollywood stars showed up with any regularity. It was already one of the biggest comic conventions in the world before Hollywood came calling, and it would still be a huge event without them.

Case in point, the Comic-Con itself can no longer be contained by the convention center. For well over a decade, studio-sponsored events and attractions have temporarily set up in San Diego’s Gaslamp Quarter. And this year, the Dungeons & Dragons tavern is one of the key draws…if you can get in. Comic-Con crowds are always a challenge, but if you brave the lines, you’ll see a more in-depth look at the characters and creatures from Honor Among Thieves. Even the ones that weren’t in the trailer.

Getting back to Hall H, Teen Wolf: The Movie only brought in two cast members, but they were the big ones: Tyler Posey, the titular Teen Wolfand TV’s current Superman, Tyler Hoechlin. The Paramount+ original movie was written by Teen Wolf creator Jeff Davis, who was also at the Hall H panel. The story will pick up with Scott McCall (Posey) as a young adult who is trying to build a real life for himself in Los Angeles. However, a new threat in Beacon Hills will reunite Scott with Derek Hale (Hoechlin), and other friends and allies. But the thing that catches Scott off-guard is the return of his long-dead girlfriend, Allison Argent (Crystal Reed).

And it just wouldn’t be Comic-Con without a surprise guest appearance. In this case, former Buffy the Vampire Slayer star Sarah Michelle Gellar joined the Teen Wolf panel as a newly revealed cast member of the upcoming offshoot series, Wolf Pack.

Davis is writing Wolf Packwhich is based on the novels by Edo Van Belkom. Gellar is executive producing the show and starring as arson Investigator Kristin Ramsey. It’s Kristin’s job to track down two teenagers, as played by Armani Jackson and Bella Shepard, who have been blamed for starting a wildfire in California. However that blaze apparently awakens a supernatural predator near Los Angeles whose presence will endanger all of their lives.

Did you think that was all that would happen on Day 1? Guess again. Comic-Con panels and programming have more than just Hall H events. In Ballroom 20, Disney+ brought the cast of its upcoming original series, National Treasure: Edge of History: Lisette Olivera, Jake Austin Walker, Antonio Cipriano, Jordan Rodrigues, Zuri Reed, and Lyndon Smith. This is not a reboot of the National Treasure films starring Nicolas Cage. Instead, writers Cormac Wibberley and Marianne Wibberley are simply introducing a new heroine: Jess Morales (Olivera), a Dreamer who finds herself on a quest to locate a lost Pan-American treasure. Justin Bartha is slated to make a guest appearance to reprise his role as Riley Poole from the films. And it was announced at the panel that Harvey Keitel is also coming back as FBI Agent Peter Sandusky.

There wasn’t a full trailer reveal at the panel, but the teaser was dropped.

Marvel had a relatively quiet first day of Comic-Con, but Disney+ filled in the gap with a Comic-Con surprise of its own. The three R-rated Marvel X-Men-related movies, Deadpool, Deadpool 2and Loganare all available on Disney+ right now. These are the first R-rated flicks to ever be added to Disney+ in America, and it seems to represent a seismic shift for Disney’s streaming service. Because if these movies can stream on Disney+, then many of the R-rated 20th Century Studios may no longer be bound to Hulu alone.

Day 1 of Comic-Con was fairly eventful, but it’s only scratching the surface of what’s to come. There are still the DC and Marvel movie panels ahead, and you can always count on something surprising to drop. But if Thursday is any indication, Comic-Con is really back.