When you do become pregnant, there is plenty of advice on what to eat from friends and family. Try this, but not that. Not everyone too much and certainly not too little! But how can pregnant women know what to eat? Imagine you’re making a delicious tuna sandwich, but you may have heard that some fish need to be eaten in moderation because they can contain mercury. If you are pregnant, you may try to play it safe and avoid eating fish, including tuna. However, this may not be the best way to deal with the situation.

The FDA advises that eating fish during pregnancy may have health benefits for both the mother and the developing child. But don’t worry, there are guidelines that must be followed so that you and your growing baby can offset the nutritional benefits of eating fish while reducing the risks.

The FDA’s 2015-2020 nutritional guidelines recommend that pregnant women eat 8 to 12 ounces of seafood weekly, including a variety of fish and shellfish. The FDA goes even further with advice to pregnant and breastfeeding women about eating certain types of fish.

What does the FDA say about the tuna you want to eat?

It turns out that different species of tuna have different levels of mercury. The FDA divides fish into three categories: best, good, and avoid. Canned light tuna (d from Skipjack) is on the “best” list, and it is recommended that you eat eight to twelve ounces a week. Both albacore and yellowfin tuna are on the “good” list, and only four ounces a week should be eaten. However, bigeye tuna is on the avoidance list and should not be eaten at all.

Benefits of Eating Fish While Pregnant

Fish is rich in healthy proteins, fats, and minerals. A 5-ounce can of light tuna in water provides a whopping 20 grams of protein! You are also getting large amounts of the minerals niacin, vitamin B12 and selenium – all important for the health of your growing boy or girl.

Fish must be eaten in moderation as it can contain a heavy metal known as methylmercury. This heavy metal is not easily excreted and can cross the blood-brain barrier and placenta in pregnant women. Studies have linked exposure to methylmercury to an increased risk of various diseases, such as: B. Developmental deficits in children and cardiovascular diseases in adults. If you eat fish that are high in methylmercury, you are exposed to larger amounts of this heavy metal. You may be wondering how and why does mercury get into a fish like tuna in the first place. It turns out that there are a variety of s.

Why do fish contain mercury?

The UN Environment Program conducted a study to investigate where the mercury in the oceans comes from. They found that 10% of the added mercury came from natural s such as volcanoes or underwater thermal vents. While the remaining portion came either directly from human s (like burning coal in a power plant) or from floods that left mercury people in the ground and put into the ocean.

In the sea, mercury is absorbed by algae. Fish that eat algae then begin to accumulate mercury in their body. An algae-eating fish that has a short life contains less mercury than an algae-eating fish that has a long life. What can make it worse is a fish that will eat smaller fish. Every time they feed on a smaller fish, they ingest all of that fish’s mercury. The end result is that top predatory fish like shark or tuna end up having the highest mercury content. 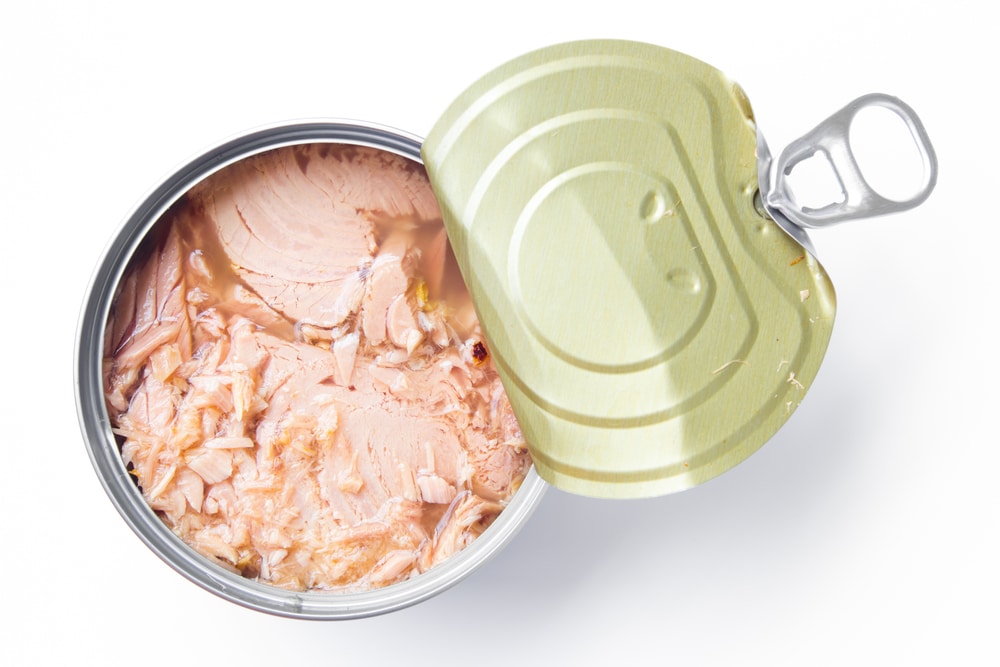 It turns out that not all canned tuna are created equal!

If you look at the store shelves, you can find either light or canned white tuna. And while these sound similar, they are actually very different.

Light tuna is generally made with skipjack tuna. This is a “best” seafood choice according to the FDA, and it can eat 8 to 12 ounces per week. But watch out! Some light tuna are marketed as “tonno” or “tonnini”. These tuna cans are typically made from yellowfin tuna. This is a “good” choice and should only be eaten four ounces a week.

White tuna is made from Albacore. These fish contain up to three times as much mercury as Skipjack and are in the “good” category according to the FDA. So feel free to eat, but remember that only four ounces can be eaten per week.

Figuring out what type of tuna you are eating can be difficult. Therefore read the can carefully. If you are not sure, choose another brand that is clearer. Or play it safe and assume you can only eat one serving for that week.

How Many Cans of Tuna Can You Eat When Pregnant?

A typical can of tuna weighs five ounces. But most people drain the liquid, leaving only 4 ounces of tuna meat. That is, one can of tuna is one serving. If you stick to light tuna, you can have two or three cans of tuna in a week. If you want to eat “Tonno Light” or canned white tuna, stick to one can a week.

Safer Fish To Eat During Pregnancy

Given the wide variety of fish available in grocery stores and restaurants, it is important to understand which fish are safest to eat while pregnant. In general, the smaller the fish or shellfish, the better. Several organizations have put together practical lists of safe fish. For a full list of safe fish, see the FDA’s Fish Consumption Recommendations or the Natural Re Defense Council’s wallet card on mercury content in fish.

There are several types of fish that should not be eaten at all during pregnancy. These fish include king mackerel, marlin, orange roughy, shark, swordfish, tilefish from the Gulf of Mexico and bigeye tuna. So if you’re in the mood for one of these big boys, wait until you stop eating for two.

What is a serving of fish?

The FDA recommends eating four, eight, or twelve ounces of fish, depending on what type of fish you are eating. But it’s not that easy to find out when you’re standing in your kitchen or looking at a plate in a restaurant.

So what can you do

As a guide, measure with the palm of your hand. A piece of seafood the size of your palm (excluding your fingers) is four ounces. So if you order yellowfin tuna in a restaurant, a fish that is a “good” choice, you shouldn’t be eating more than a palm tree is worth. Then you might pass on seafood for about a week.

Can I eat raw fish while pregnant?

If you think that eating raw fish while pregnant is a no-no, think again! Eating raw fish, such as in sushi, can be a great way to add seafood to your diet. There are just a few things to keep in mind.

The danger of eating raw fish is that they could have parasites. Hence, any raw fish you eat must be treated in a way that kills these parasites. This can include freezing the fish (a common practice for sushi-grade fish), pickling it, or smoking it.

You need to know more if you want to dine at your local Japanese restaurant. Most raw shellfish are not frozen, so you should avoid them. This includes prawns, prawns, crabs, and scallops. Fortunately, most fish in the U.S. must be frozen before being sold as sushi.

An exception is farmed salmon, which can be grown for the purpose of making sushi and does not have to be frozen. You can ask your waiter to check that your salmon is frozen. Or play it safe and just order a smoked salmon nigiri to fill up with salmon.

Tuna is usually frozen before being used as sushi. In the case of parasites, you are welcome to participate. But be careful not to overeat! Sushi-grade tuna often contains more mercury than standard-grade tuna.

Use caution when eating tuna while pregnant

While grace poses a risk when you’re pregnant or breastfeeding, it can be done safely if you are thoughtful and carefully follow guidelines. Watch how much you eat, partake in only the safest forms of tuna, and be mindful of the risks. If you are careful, you can still enjoy tuna while making sure you and your baby are happy and healthy.

5 Ways to Save Money on Your Grocery Bill

Everything to Know About Host and Hostess Gift Etiquette

How to Wrap a Gift So It Looks Professionally Done

6 Mistakes to Avoid When Giving a Gift