Blockbusters, much like live music, has been officially declared to be back this summer. But whether you tune in to stream, or head back to the theaters, one thing has become abundantly clear—Space Jam will be everywhere.

Twenty-five years after Michael Jordan and the Looney Tunes gang bested an alien invasion on the court, Space Jam: A New Legacy is set to open in theaters on July 16, and streaming on HBO Max. The updated, Tron-like film will star Los Angeles Lakers great LeBron James, as well as a rogue computer played by Don Cheadle, who then forces James to team with (who else?) the Looney Tunes to compete against the A.I.’s all-star Goon Squad. The film also boasts an impressive roster of fellow basketball players, including Anthony Davis, Chris Paul, Damian Lillard, Diana Taurasi and Nneka Ogwumike.

As impressive as the all-star cast line-up is, WarnerMedia has also lined up an all-star star roster of products, with nearly 200 brand collaborations to get in on the jam this summer. Fashion lines, toys, collectibles, wearables, books, sporting goods, streetwear, games, and yes, even cereal, will be getting the Space Jam treatment.

The Jam extravaganza will include well-known brands like Nike, who will sell a replica of the shoes James wears in the film, to Tommy Hilfiger, who plans to release a Looney Tunes x Tommy Jeans capsule, and even Bloomingdale’s, offering Space Jam-themed pop-up shops with home accessories (which are great if you plan to stream the film at home). This new wave is not even covering the sheer amount of nostalgic merch that is already available online from the first movie.

“The original movie was the first of its kind where we saw sports, entertainment, music and digital technology come together in such an innovative way. It was certainly a defining moment in the Nineties, but even today the movie is a cult classic that people of all ages enjoy,” said Hilfiger in a recent interview with WWD.

You can expect more collaborations and announcements to be revealed throughout the summer leading up to the film’s premiere. But in the meantime, we’ve rounded up the best Space Jam available online now. Welcome to the jam. 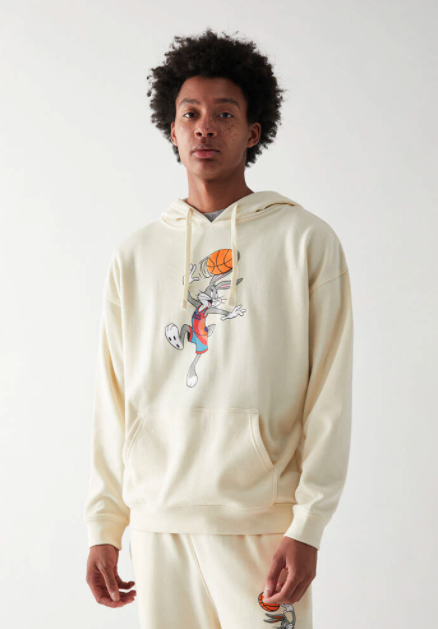 PacSun’s new Space Jam collection lets you stay comfy on your way to shoot some hoops with the Looney Tunes, especially with their new Puff Bugs Hoodie. This fleece fabric makes the piece means it will stay super soft, whether you’re on the court, or just lounging around. The chill hoodie features a Bugs Bunny graphic playing ball on the front, and the logo for Space Jam: A New Legacy on the back. Part of a two-piece sweatsuit set, the Puff Bugs Hoodie is made with an adjustable drawstring hood, long sleeves, a kangaroo pocket, and ribbed cuffs and hem. 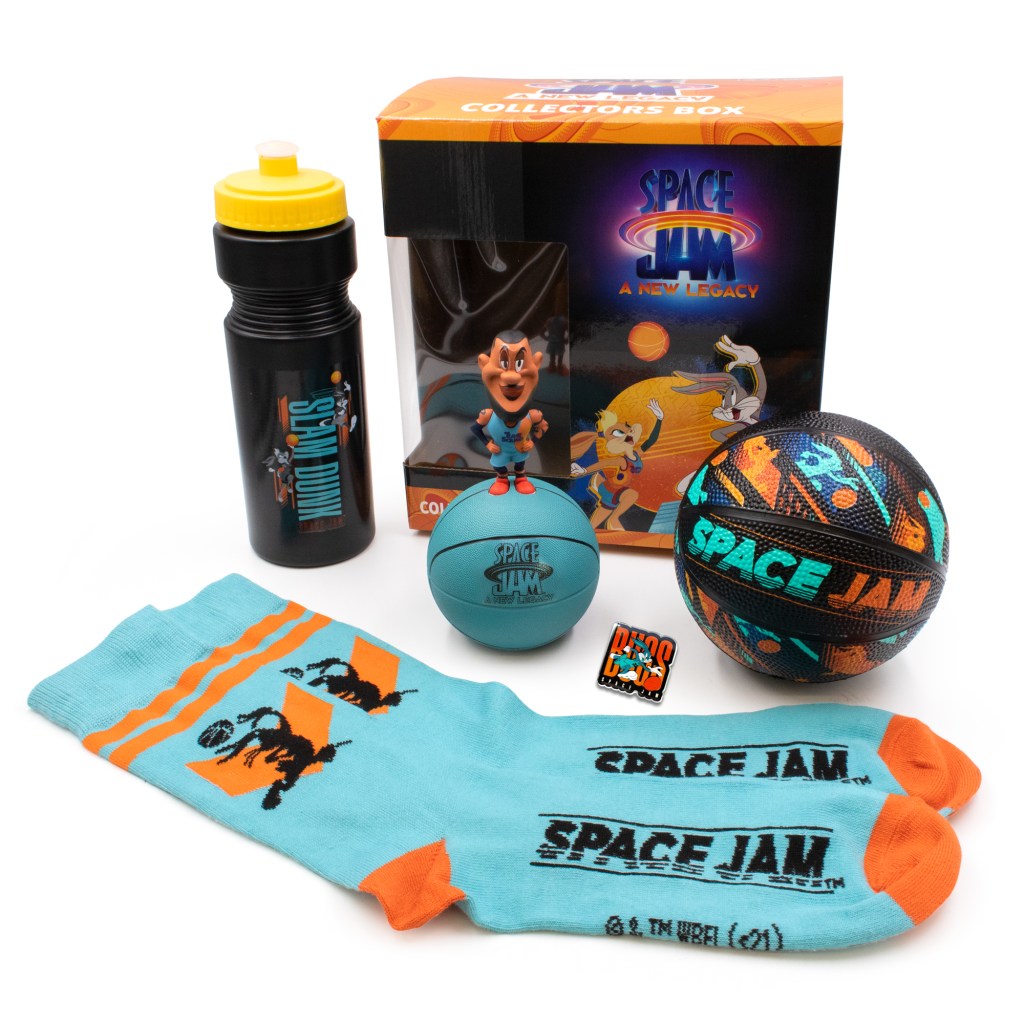 A GameStop exclusive, this Space Jam: A New Legacy Collector’s Box is “jam”-packed with collectibles, gear, and goods that will make you a pro on the court. The Space Jam collection set features a Bugs Bunny pin, a mini basketball, a water bottle, crew socks, and a PVC/plastic figure of toonified James, called “LeBron Smols”. You can preorder the box now on the GameStop website, and get hype for the Goon Squad’s biggest game. 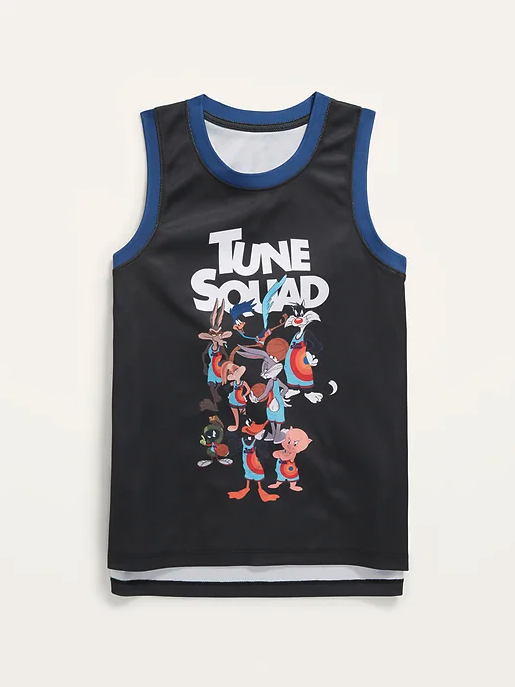 Know any kids who can’t wait to see the Tune Squad on screen? Old Navy is offering a gender-neutral line of Space Jam apparel for kids including this Tune Squad Basketball tank. Made of a breathable, lightweight mesh and polyester, this graphic tank top is great for anyone who wants to imagine themselves on the team (the back also features a “Bugs” name graphic). The U-neck design, vented sides, and relaxed fit make it great for the summer, just in time for the film’s premiere. 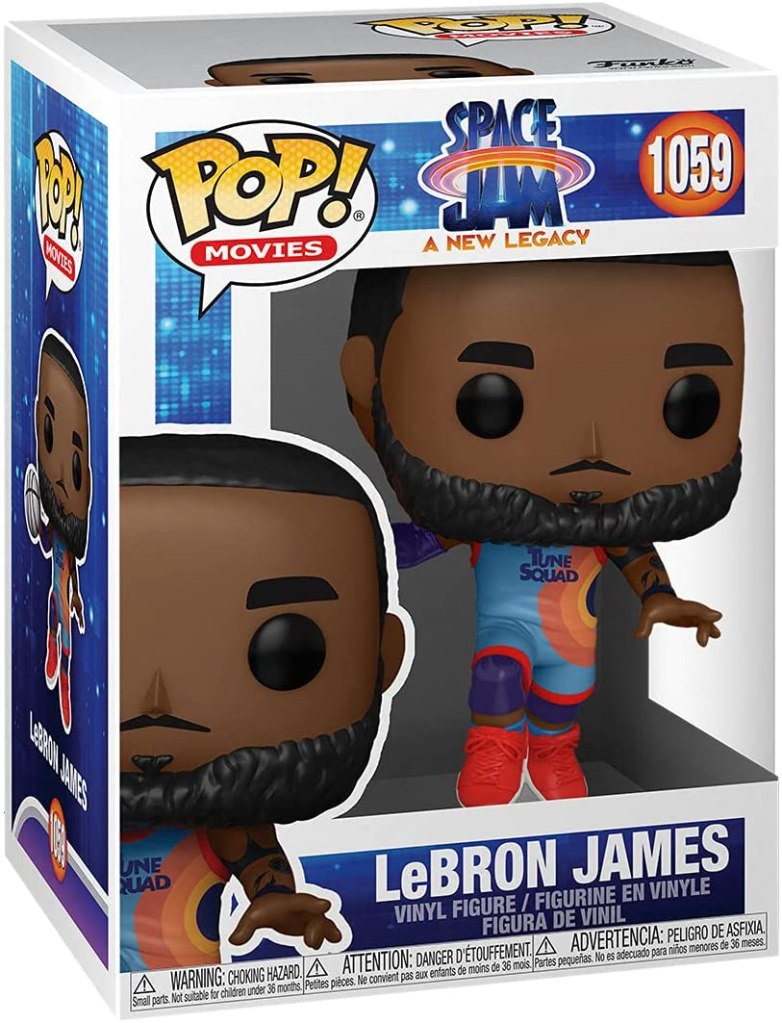 Funko’s Space Jam: A New Legacy collection will include nine Pop! figures, five Pop! keychains, 12 Mystery minis, three upcoming exclusives and a Funkoverse board game. That’s a lot of Funko, but our favorite of the bunch so far is this Funko Pop of James jumping into action, his stylized vinyl figurine collectable standing much shorter than the legend himself, at just 3 ¾ inches tall. It’s great for displaying in any Space Jam fan’s collection—note that preorders of the other figures are selling out fast, so get them while you can. 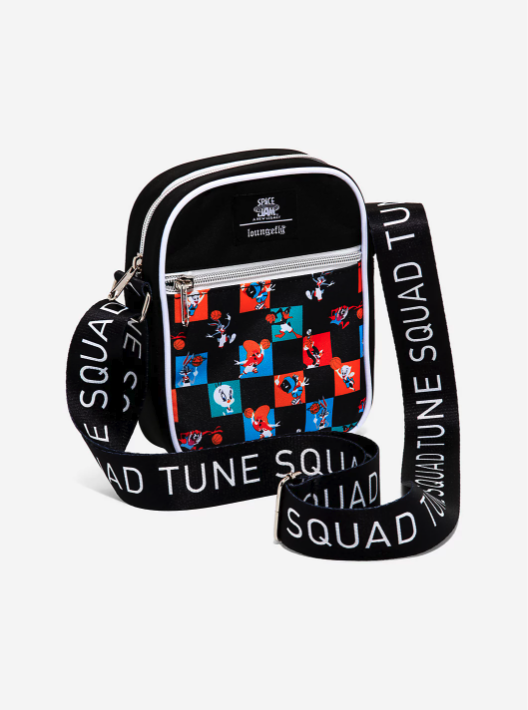 Want a place to stash some snacks when you go see Space Jam in theaters? (It’s okay, we won’t judge.) You can pack all the essentials into this lightweight, athletic crossbody Tune Squad bag. The colorful checkered design features Looney Tunes favorites in their basketball gear from the film. It features an adjustable strap with a “Tune Squad” text design, turquoise lining with an interior drop pocket, front zipper pocket, and a hidden pair of Marvin the Martian eyes in the back. 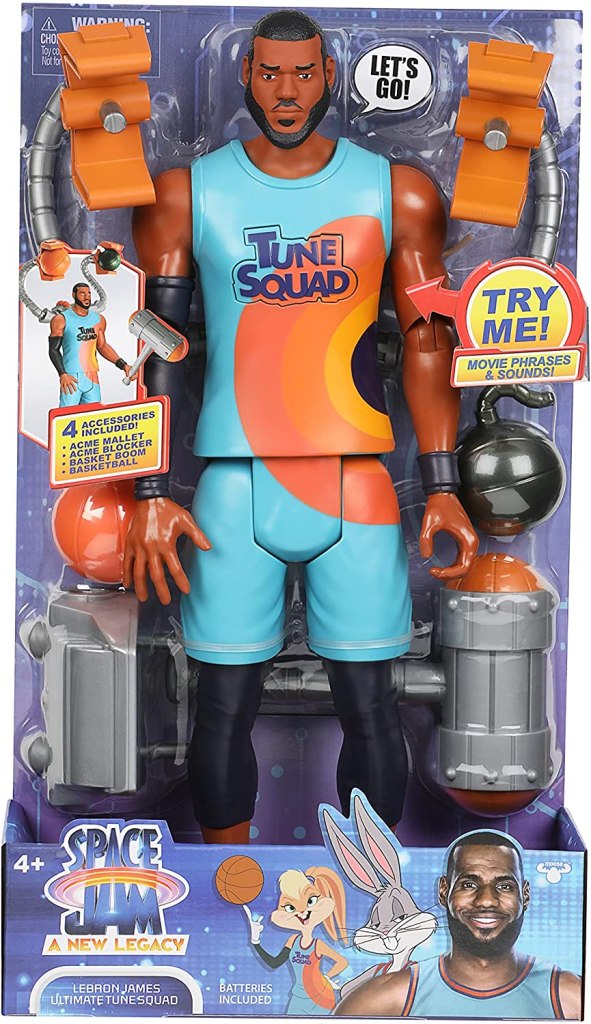 There’s a collectible for every action-packed part of the upcoming Space Jam movie, but our pick from Moose Toys’ line-up has to be this Lebron James 12″ Action Figure. No only is the figure fully-articulated, but it comes with extra features—if you press LeBron’s chest you can hear over eight sounds and phrases from the movie. Accessories like the ACME Blocked and Basket Boom can easily attach to his body, back and claws. We can’t imagine what kind of antics will happen on the court in the film, but if this figure is any indication of the sheer zaniness to come, sign us up.