Hybrid technology has been around for over a century. Porsche — the man, not the company — fine-tuned a gasoline-electric drivetrain shortly after the turn of the 20th century, but it didn’t merge into the mainstream until Toyota released the first-generation Prius in 1997. Twenty-three years later, there are dozens of hybrids available new in the U.S.

The original is still the best, though. If you’re in the market for a hybrid, the Toyota Prius is the best one. It’s efficient, it’s spacious, and it’s relatively affordable. If you don’t want to see it in your driveway, however, there are other great options ranging from a rugged pickup truck to a luxury car that’s equally at home on the road and on the track.

Why you should buy this: The Prius continues to define the hybrid category in most every way.

Who’s it for: Anyone who hates visiting the gas station.

Why we picked the Toyota Prius:

The name “Prius” is synonymous with “hybrid,” and for good reason. Toyota’s best-selling hybrid continues to prioritize fuel economy above all else, and though efficiency is its main goal, the Prius doesn’t ask buyers to make any major compromises — except maybe in the styling department.

The Prius is the most fuel-efficient hybrid around, getting an EPA-rated 56 mpg combined in Eco trim. That’s thanks to Toyota’s tried-and-true Hybrid Synergy Drive system and a 1.8-liter four-cylinder engine that achieves a 40% thermal efficiency, which is much higher than most engines. The Prius also achieves a very low drag coefficient of 0.24, meaning it has fairly low aerodynamic drag, which helps improve efficiency. Toyota’s designers managed to do that while maintaining a roomy cabin and useful hatchback shape.

The current-generation Prius is also appreciably more enjoyable to drive than previous models, thanks to changes like a lower center of gravity and a more sophisticated double-wishbone independent rear suspension system. Like other Toyota models, the Prius also gets the Toyota Safety Sense suite of driver-assistance features (including adaptive cruise control and a pre-collision system with pedestrian detection) as standard equipment.

Why you should buy this: It’s a great daily driver that just happens to be a hybrid.

Who’s it for: The hybrid driver that likes to fly under the radar.

Why we picked the Honda Insight:

Honda decided to build a great sedan that just happens to be a hybrid car. We think that’s the right move. The 2020 Insight is closely related to the Civic, a car we’re quite fond of, but Honda says that it made extensive modifications to the compact car’s body. The Insight uses a 1.5-liter, Atkinson-cycle four-cylinder engine paired with the hybrid system from the larger Accord Hybrid.

With an EPA-rated 52 mpg combined in LX and EX trims (the heavier Touring model is rated 48 mpg), the Insight isn’t quite as fuel-efficient as the Prius. The Insight is more enjoyable to drive than the Prius, though, and its infotainment system is easier to use. Unlike Toyota, Honda offers both Apple CarPlay and Android Auto, albeit not on the base level. The Prius may still be the best overall hybrid car, but the Insight tries to appeal to a broader array of drivers.

Why you should buy this: It’s a hybrid that can climb every mountain.

Who’s it for: People who don’t use roads.

Why we picked the Land Rover Range Rover P400e:

Land Rover’s Range Rover helped define the modern SUV, and it’s still one of the best examples of the breed around. With a luxurious interior and impressive off-road capabilities, it’s hard to think of a vehicle that offers more in a single package. Now, the Range Rover is also available as a plug-in hybrid, part of a plan by Land Rover and sibling Jaguar to offer electrified powertrains in every new model.

The Range Rover P400e uses a 2.0-liter, turbocharged four-cylinder engine assisted by an electric motor. Land Rover claims the P400e will do zero to 60mph in 6.4 seconds and reach a top speed of 137mph on pavement. But, as with other Range Rover variants, the P400e is set apart from other utility vehicles by genuine off-road capability. 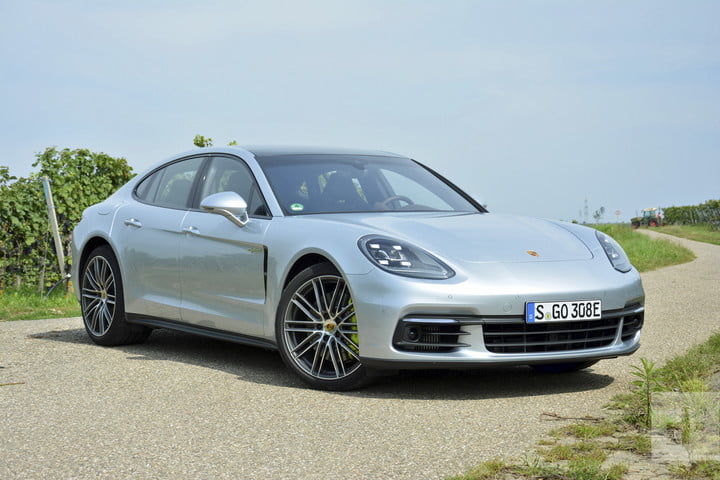 Why you should buy this: It provides a rare blend of efficiency and all-around performance.

Who’s it for: People who want a high-end sports sedan without the high CO2 emissions.

Why we picked the Porsche Panamera 4 E-Hybrid:

Porsche’s Panamera 4 E-Hybrid is a multitasker. First, it’s positioned near the middle of the Panamera hierarchy. It’s more powerful than the base car and more affordable than either of the high-zoot Turbo models. Second, it’s also a plug-in hybrid capable of Porsche-like performance one minute and zero-emissions driving the next. Going from one mode to the other requires only a simple push of a button.

The E-Hybrid’s swoopy sheet metal hides a twin-turbocharged, 2.9-liter V6 engine that works with an electric motor linked to a 14.1kWh lithium-ion battery pack. The total output checks in at a V8-like 457 horsepower, but the drivetrain also provides up to 14 miles of electric range at no more than 90mph.

Drivetrain aside, it’s still a Porsche. It looks like a Porsche, and, importantly, it handles like one. It accelerates like one, too, thanks in part to the instant torque provided by the electric motor. When we drove it in Germany, we were impressed with the quality of the materials in the cabin. The biggest downside to the E-Hybrid is that the aforementioned battery pack eats up about 3 cubic feet of trunk space, reducing capacity to 14.3 cubes with four adults on board.

Porsche is about to make the gas-electric Panamera even better. There’s a new midrange model around the corner.

Why you should buy this: It’s a fantastic luxury sedan that just happens to be a plug-in hybrid.

Who’s it for: People who want to save the planet in style and luxury.

The BMW 530e is a great hybrid, largely because the non-hybrid 5 Series was already a great luxury sedan. We like its styling, driving dynamics, and thoughtful integration of tech. It’s sharp to drive like any BMW should be, but not to the point where it’s punishing. It strikes the perfect balance between comfort and dynamism.

On top of that solid foundation, the 530e adds a more efficient powertrain that allows the driver to travel farther between fill-ups. With its 12kWh battery pack fully charged, the plug-in can travel for about 20 miles on electric power alone or achieve an EPA-estimated 69 mpg equivalent in hybrid mode. That’s with rear-wheel drive; selecting all-wheel drive lowers that figure to 65 mpg equivalent.

If you feel less like saving energy and more like getting somewhere in a hurry, the 530e can muster 248 hp using a combination of electric power and a 2.0-liter, turbocharged four-cylinder gasoline engine. It’s not an M5, but it has more than enough power to get out of its own way.

Why you should buy this: Comfortable, efficient, and handsome, the Chrysler Pacifica Hybrid is without fault.

Who’s it for: Bustling families with a need for maximum cargo and passenger volume.

Why we picked the Chrysler Pacifica Hybrid:

While the Chrysler Pacifica Hybrid could earn a spot on this list simply for being the only hybrid minivan on the market, though one from Toyota is on its way, that’s not the reason we’ve included it. Rather, we fell in love with this people-mover for its blend of handsome styling, innovative features, comfortable ride, and driving dynamics (yes, we just said a minivan was fun to drive).

The Pacifica Hybrid does all the things customers demand of a minivan. It carries up to eight passengers, offers creative interior storage options, bundles front and rear rider entertainment, and rides smoothly. Beyond these check boxes, the Chrysler van uses its plug-in hybrid powertrain to deliver 33 miles of all-electric range and 500-plus miles of gas-electric range. Furthermore, the Pacifica doesn’t bore you to death with its exterior styling, power, or handling.

While its price may seem high at first glance, when you break down all the features, it’s one heck of a deal. We wouldn’t just pick the Pacifica Hybrid over any other minivan — we’d seriously consider it over some of the better midsize SUVs. Keep in mind that Chrysler is about to give it a mid-cycle update for 2021.

The best all- or four-wheel drive hybrid: Ram 1500

Why you should buy this: It has the hauling capacity and off-road prowess of a truck without the bad fuel economy of one.

Who’s it for: Adventurers, contractors, and anyone with bulky hobbies.

On paper, four-wheel-drive pickup trucks and hybrid cars exist on opposite ends of the same spectrum. Ram bundled them into one vehicle when it released the 1500 eTorque, however. The technology consists of a 48-volt, 0.4kWh lithium-ion battery pack and a DC-DC converter used to charge the truck’s 12-volt electrical system. The belt-driven unit also powers the automatic stop/start system and sends electricity back to the battery pack under braking. The eTorque system can’t power the truck on its own, but it makes it smoother and more efficient in virtually all driving conditions.

Ram offers the eTorque system on V6- and V8-powered trucks, so customers aren’t locked into a single configuration. The V6 models boast 305 hp while adding a pair of cylinders bumps that figure up to 395. The EPA rates the eTorque-equipped, V6-powered model at 20 mpg in the city, 26 mpg on the highway, and 23 mpg combined, which are impressive numbers for such a big, heavy truck. Towing capacity checks in at 7,730 pounds with the V6 and 12,750 pounds with the V8.

The 1500 has more going for it than just its drivetrain. The truck’s generous amount of ground clearance lets owners take advantage of the available four-wheel drive system, and even the basic trim levels are equipped with Ram’s excellent Uconnect infotainment system. Upmarket variants also gain a massive 12-inch screen positioned right in the middle of the dashboard. We praised its sharp graphics, quick input response, and smart menus.

The Digital Trends car team tests vehicles through a comprehensive scrutinizing process. We closely examine every part of the car and judge it based on our expertise and experience in the context of the vehicle’s category and price range. Infotainment and connectivity technology is thoroughly tested, as well as safety features that can be tested in controlled environments.

Test drivers spend extensive time behind the wheel of the vehicles, conducting real-world testing, driving them on highways and back roads, as well as off-road and on race tracks when applicable.

Common hybrid words you may not know

Not all hybrid cars are created equal, and you might hear different terms used to describe different types of hybrid powertrains. Here’s a quick overview.