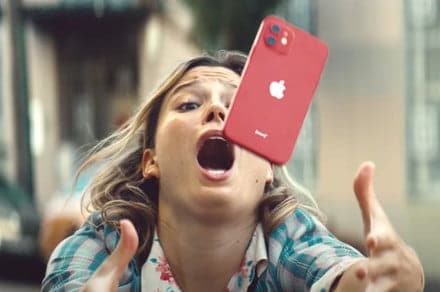 When Apple launched the iPhone 12 last fall, the tech company made much of the new Ceramic Shield display that it claims offers four times better drop performance compared to previous iterations.

Nearly six months on and the tech company has released a new ad to remind folks with slippery fingers that dropping your phone doesn’t always have to result in a cold sweat as you reach down to see if the display is still intact.

Called Fumble, the 30-second commercial (below) shows a woman walking down the street, speaking on her iPhone 12. Suddenly it slips from her hand, causing her to launch into one of those seemingly endless body wiggles that you sometimes perform when you desperately try to catch your device before it slams onto the ground. The drama plays out with a suitably jumpy soundtrack from Nitin Sawhney.

The protagonist almost has it back in her grip when she inexplicably bounces if off her thigh in a bold move that presumably was supposed to return it to the security of her hand. But in a dramatic slow-motion finale we instead see the handset fly out of reach before landing screen-side down in a pile of grit.

The woman turns the phone over, sees that it hasn’t shattered, and then carries on with her day. “Relax, it’s iPhone,” the ad says.

Comments for the video are turned off on Apple’s official YouTube page, but several messages on other uploads of the video point out that if the handset didn’t have a screen protector it would likely be scratched up after landing in the grit like that.

Indeed, the master of phone scratching, JerryRigEverything, noted that while the iPhone 12 may offer improved protection against cracks and shatters, the iPhone 12 begins scratching at a level 6 using the Mohs scale of hardness, with deeper scratches apparent at level 7 — standard for high-end smartphones.

While the iPhone 12 did perform well in many of the drop tests posted on YouTube, it’s worth noting that the Ceramic Shield only covers the display, and not the glass back, of Apple’s latest handset.

Whether you have butter fingers or not, you’re bound to drop your iPhone — or any phone for that matter — at some point. So, yes, best throw on a screen protector and a case for peace of mind.