Funko Pop vinyl figurines are a big business these days. The 3.75-inch tall figures are based on famous pop culture characters from all walks of life. They can be characters from TV shows, movies, video games, and comics, along with real-life actors, musicians, and famous faces. There is a huge collectible market surrounding Funko Pops. Some are extremely rare and pricey, with this article looking at the most expensive Funko Pop figures of all time.

These Funko Pop vinyl models stand out because are they not only expensive but hard to find. There are many Funko Pops that have limited releases or are specially made to celebrate certain events or pop culture moments. These often appear on the internet well above the retail price.

As the prices are always changing and it’s hard to gauge what Funko Pops are worth the most, we’ve used the median prices shown on Pop Price Guide, an official Funko Pop re-sellers website supported by the huge community of Funko Pop lovers.

While some of these prices are sure to change, at this point in time, these are 20 of the most expensive Funk Pop figures available. 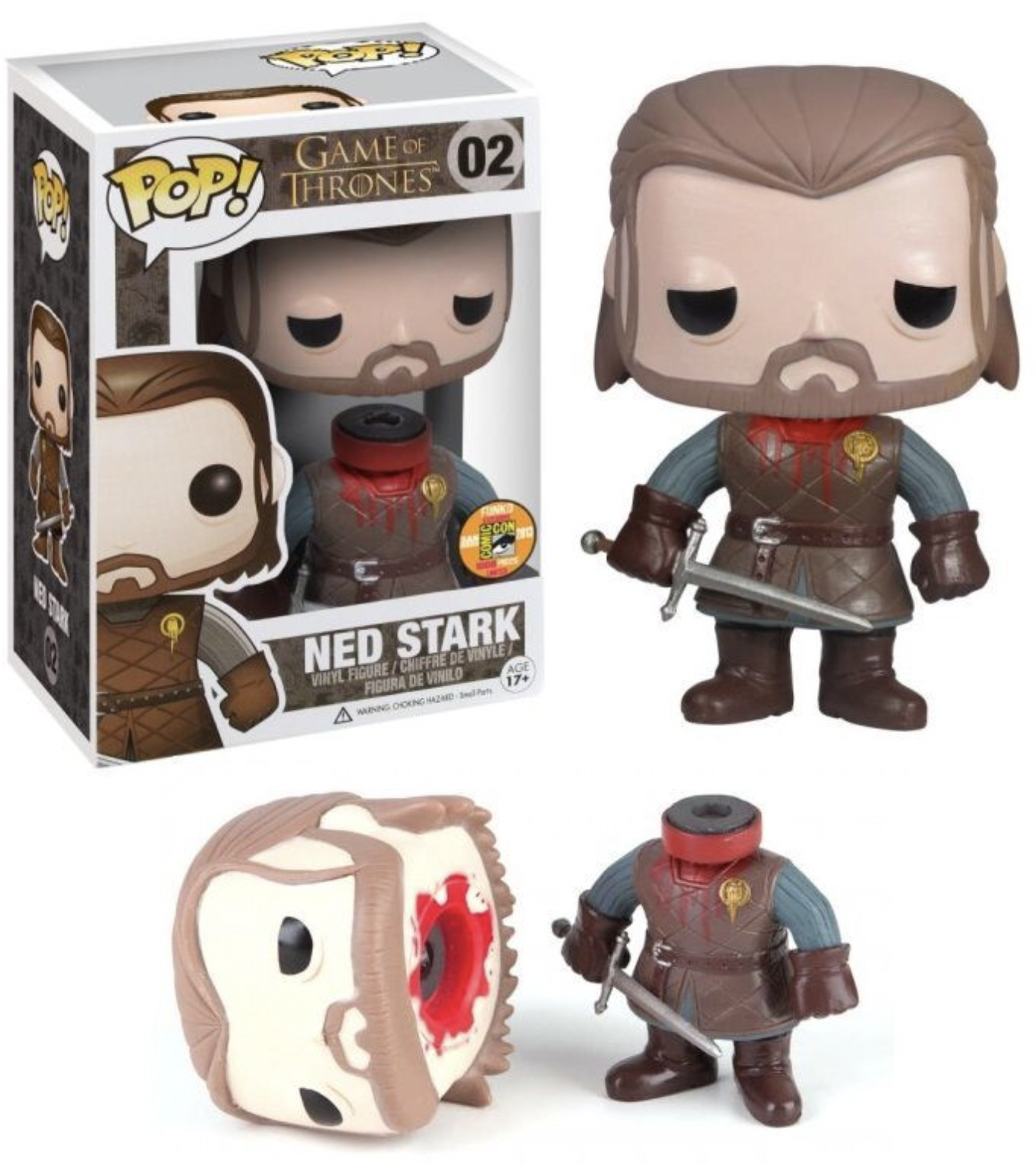 Game of Thrones is one of the biggest television shows of the past two decades, so it’s no surprise it got the Funko Pop treatment. All the major characters have their own figure, with Ned Stark a favorite amongst collectors. What separates this figure from the other Ned Stark’s is the fact that you can remove his head.

The Headless Ned Stark was a San Diego Comic Con exclusive released in 2013. While slightly morbid, it’s a Funko Pop that fans of GOT would no doubt love to have, hence its price tag. 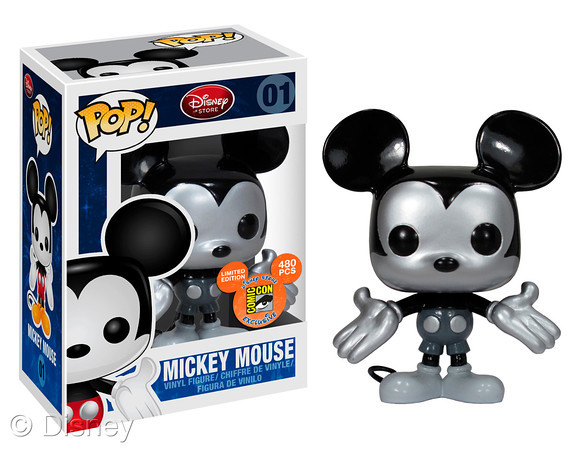 The metallic versions of Funko Pops are always much more expensive than the standard versions, as is the case with this Micky Mouse Funko Pop. There are many different Disney Funko Pop creations, but few are as expensive as this one. 480 of these metallic Funko Pops were released at the 2011 San Diego Comic Con and they make a great collector’s item. 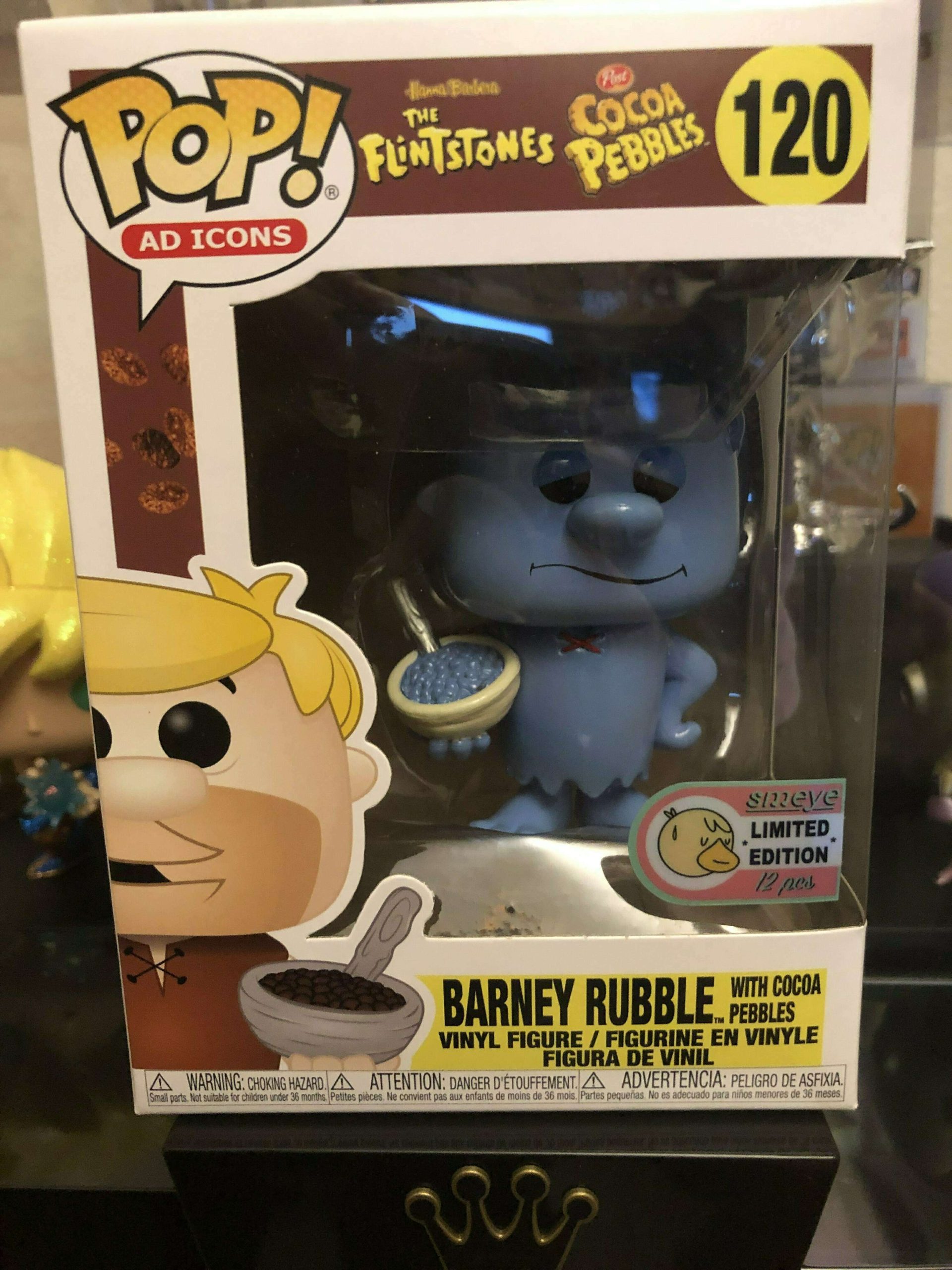 This is a cereal/Flinstones/Funko Pop crossover inspired by Boo Berry cereal. While there are multiple versions of The Flintstones Barney Rubble available, the most expensive ones concern him and Monster Cereals.

The base Funko Pop figure is of Rubble chowing down on a bowl of Cocoa Pebbles that sells for around $19. Then there is this limited edition version that’s the exact same figure, except in the color blue in a nod to Monster Cereals Boo Berry flavor. Only 12 of these Funko Pops were made and they now retail for $2,000. 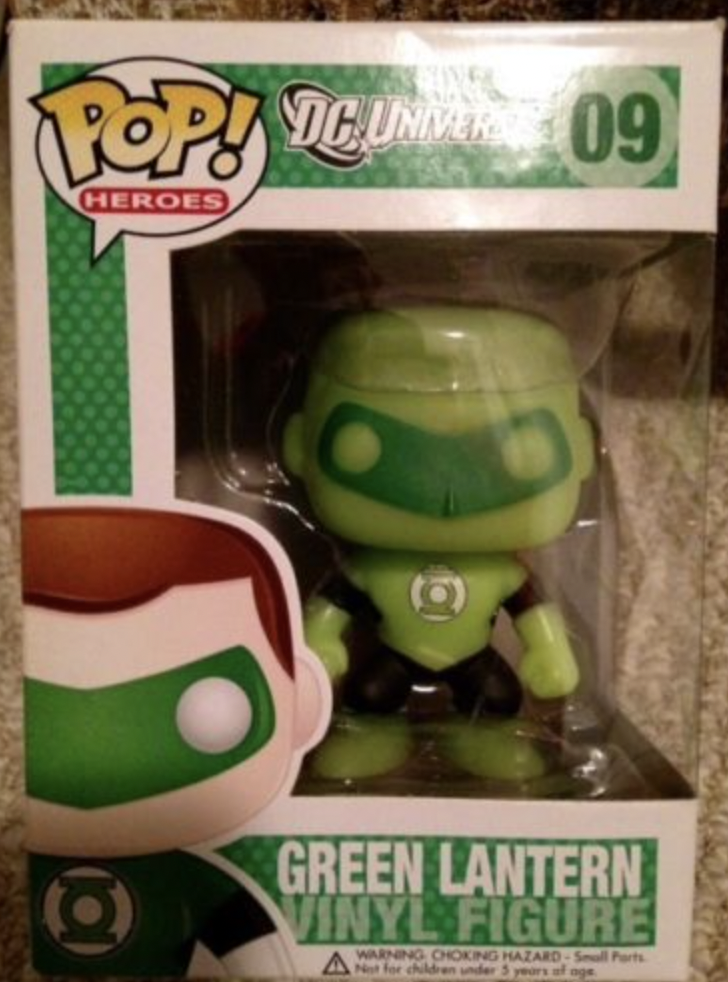 The first superhero Funko Pop on the list is Green Lantern. But this isn’t any regular Green Lantern Funko Pop. This figure glows in the dark, adding a few extra dollars to the price tag. This unique Funko Pop was released at the San Diego Comic Con in 2010. Only 240 were made, making it a fairly rare Funko Pop. 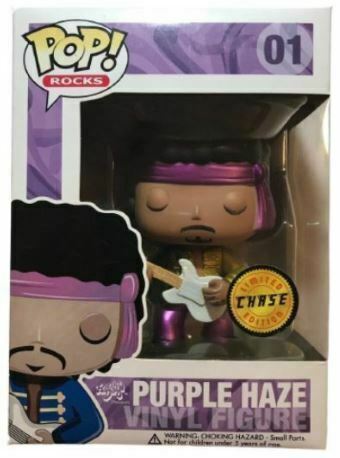 Jimi Hendrix was one of the greatest guitarists of all time. He has been immortalized as a Funko Pop on several occasions. The rarest Funko Pop of the man responsible for Voodoo Child (Slight Return) and the spectacular All Along the Watchtower cover is this Jimi Hendrix Purple Haze metallic Funko Pop. Unlike many other Metallic Funko Pops that are all metallic, it’s just Hendrix’s purple headband and pants.

When first released in 2014 this great figure retailed for $150. It’s now worth $2,940 and is only raising in price every year. This is a great Funko Pop for music fans if you can get your hands on one. 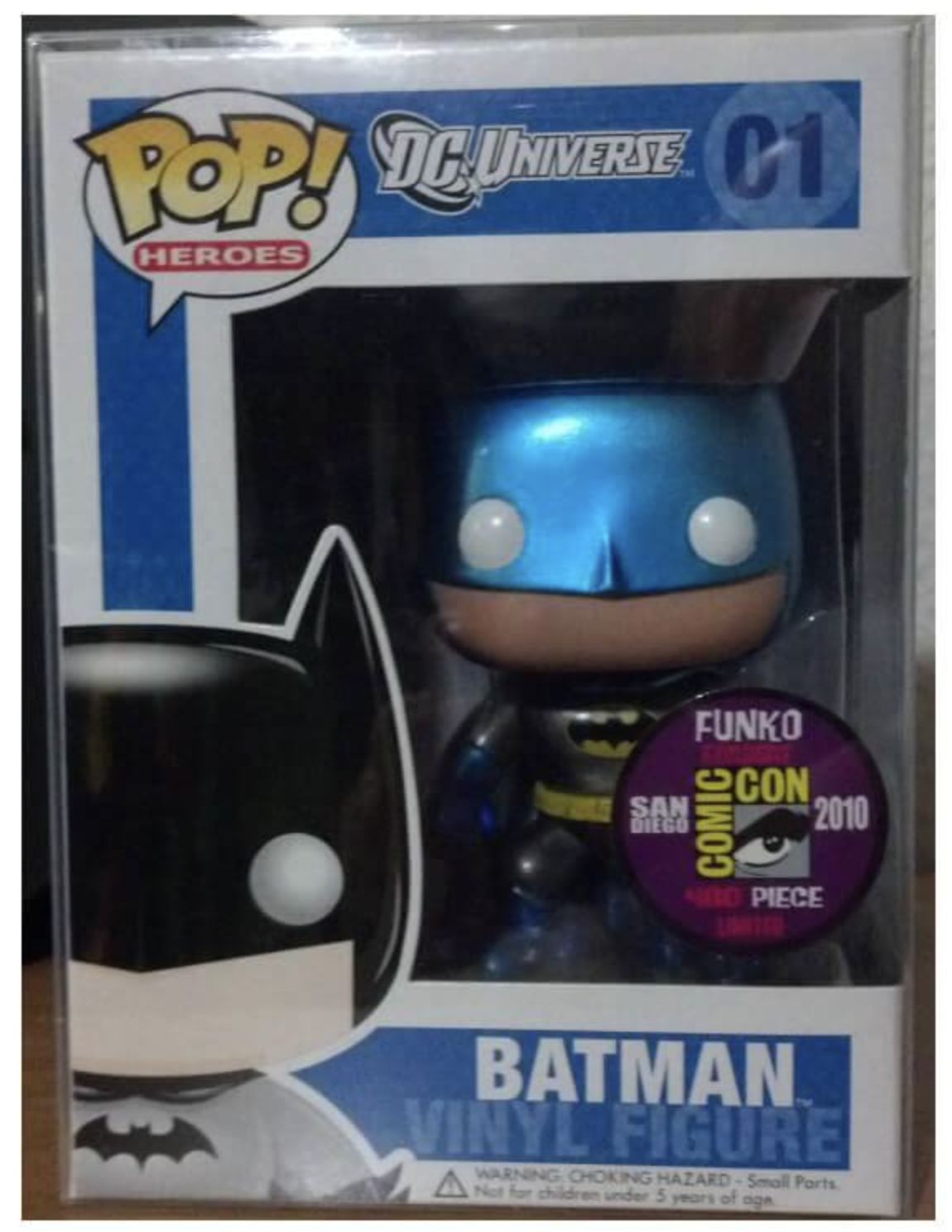 One of the original runs of Funko Pop vinyl from 2010, this is the first Batman figure released by the company. This Metallic edition went on sale at the San Diego Comic Con. Limited to 500 figures, it sold out in no time and has quickly become a hit with collectors.

Batman is wearing his original costume, adding a touch of authenticity to this model. There is also a Batman Freddy Funko edition of this figure that sells for about half the price. 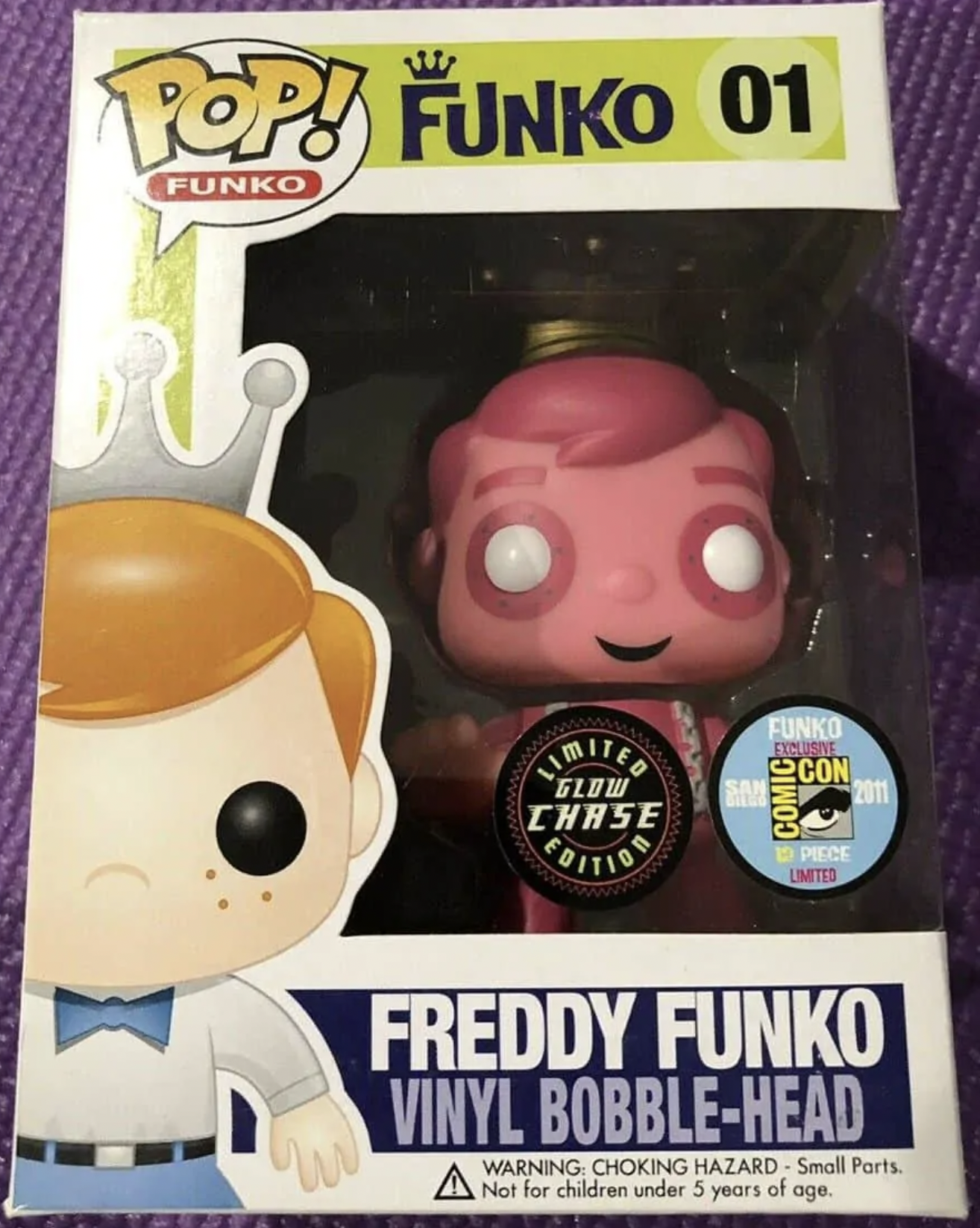 This is another Funko Pop inspired by Monster Cereal. This time Freddy Funko, Funko Pop’s mascot, is styled in the image of Frankenstein’s Monster, who is known to enjoy a bowl of strawberry-flavored cereal from time to time.

As well as being made in limited numbers, this Funko Pop also features a bobblehead and glows in the dark. No surprise this figure fetches over $5,000 on the open market. 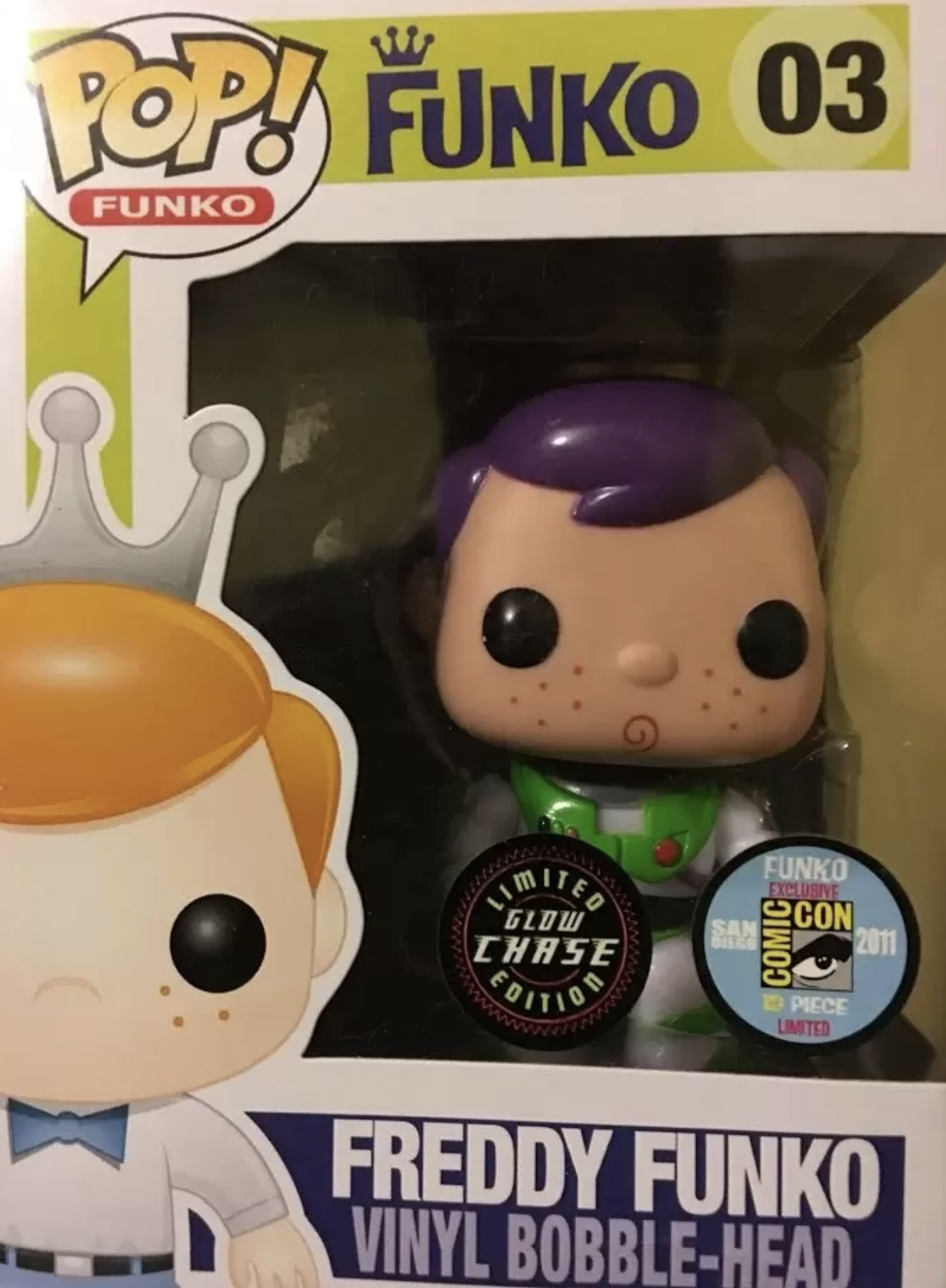 Another exclusive Funko Pop sold at San Diego Comic Con, this one finds Freddy Funko dressed up as Toy Story favorite Buzz Lightyear. Wearing his flight suit and sporting a shocking head of purple hair, the big difference between this figure and other Buzz Lightyear Funko Pops is the glow in the dark factor.

Any Funko Pop vinyl that glows in the dark automatically jumps in price, with this one no different. While the most expensive Buzz Lightyear Freddy Funko sold was around $6,500, the average price for this collector’s item is $5,680. 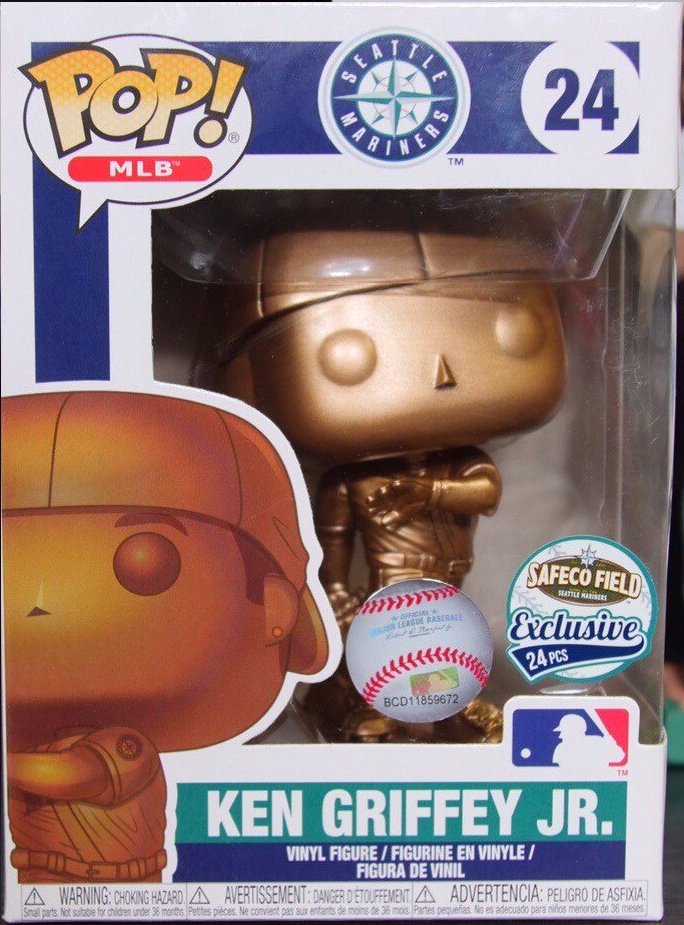 Here’s a Funko Pop for baseball fans. The original figure is based on Ken Griffey Jr’s rookie season. As you can see by the color of this one, it’s the gold-covered version. It’s exactly the same as the Rookie figure beside the gold, which increases the price enormously. Only 24 of these were manufactured. 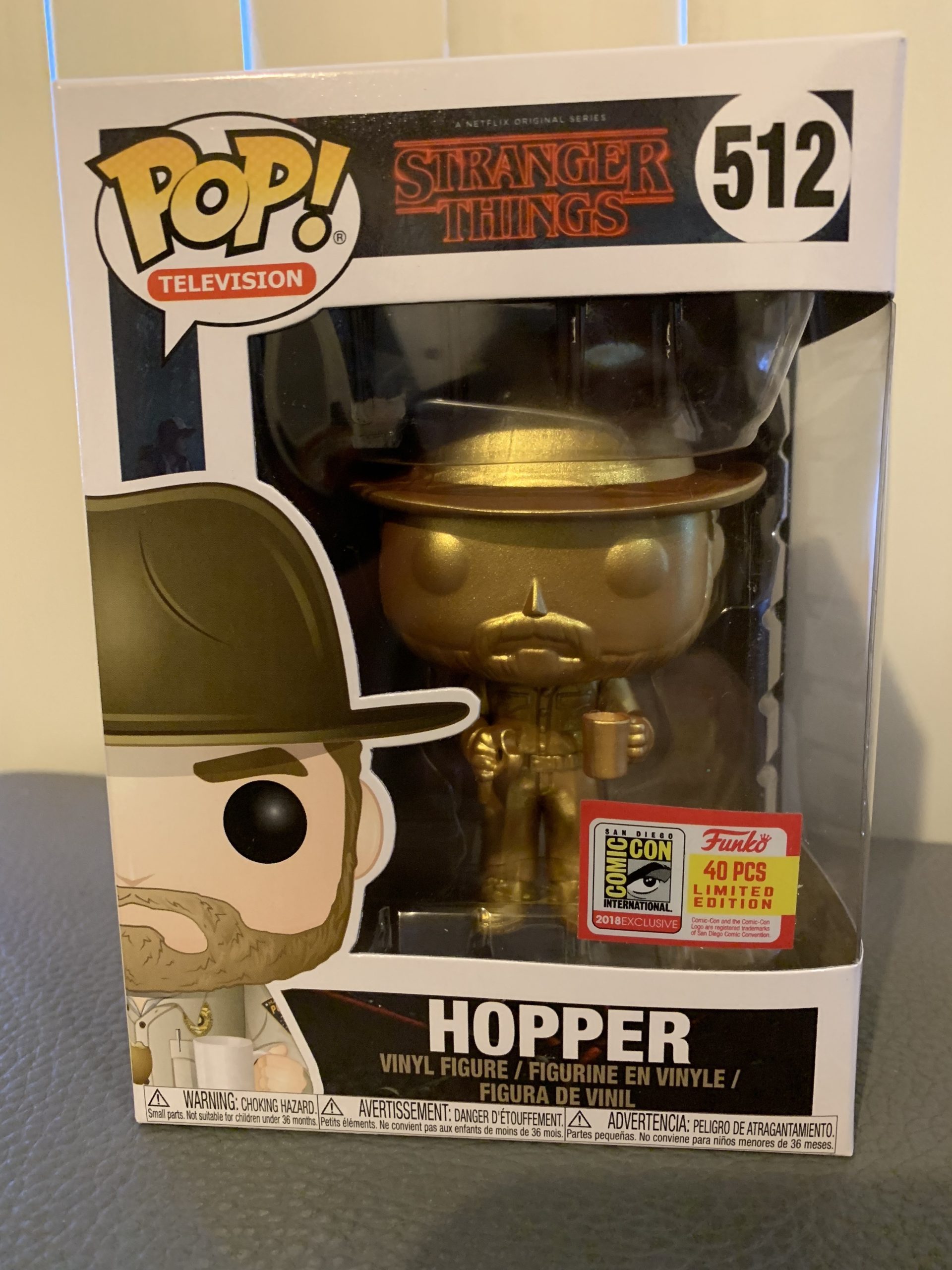 Here is another gold-colored Funko Pop that also happens to be one of the most expensive releases from the past few years. Only 40 of these figures of Hopper from Stranger Things were made.

What makes this one that little more expensive is that it’s gold in color. While they go for $6,500 online, there is one seller advertising his Hopper Gold Funko Pop for an astonishing $50,000.

The reason is that he claims to have 1/40, which certainly adds more value to the figure. Whether it’s worth $50K is debatable, but good on him if he manages to find a buyer at the price. 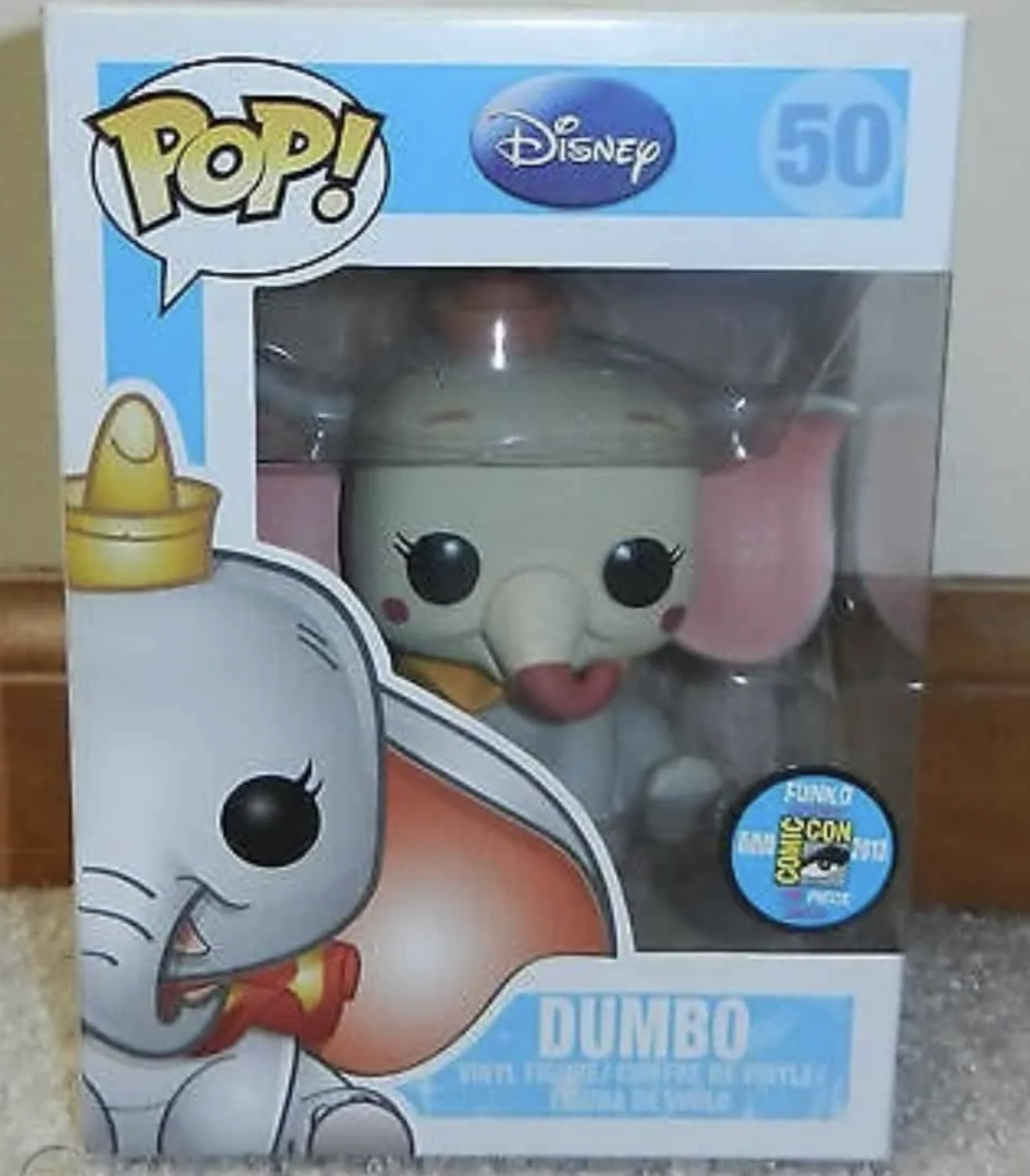 Who knew a vinyl figure elephant could be worth so much? This Funko Pop collaboration with Disney is based on the 1941 film version of Dumbo. The lovable elephant is wearing clown makeup and was limited to just 48 units. If you were lucky enough to grab one of these when released in 2013, you’d be pretty happy with yourself. 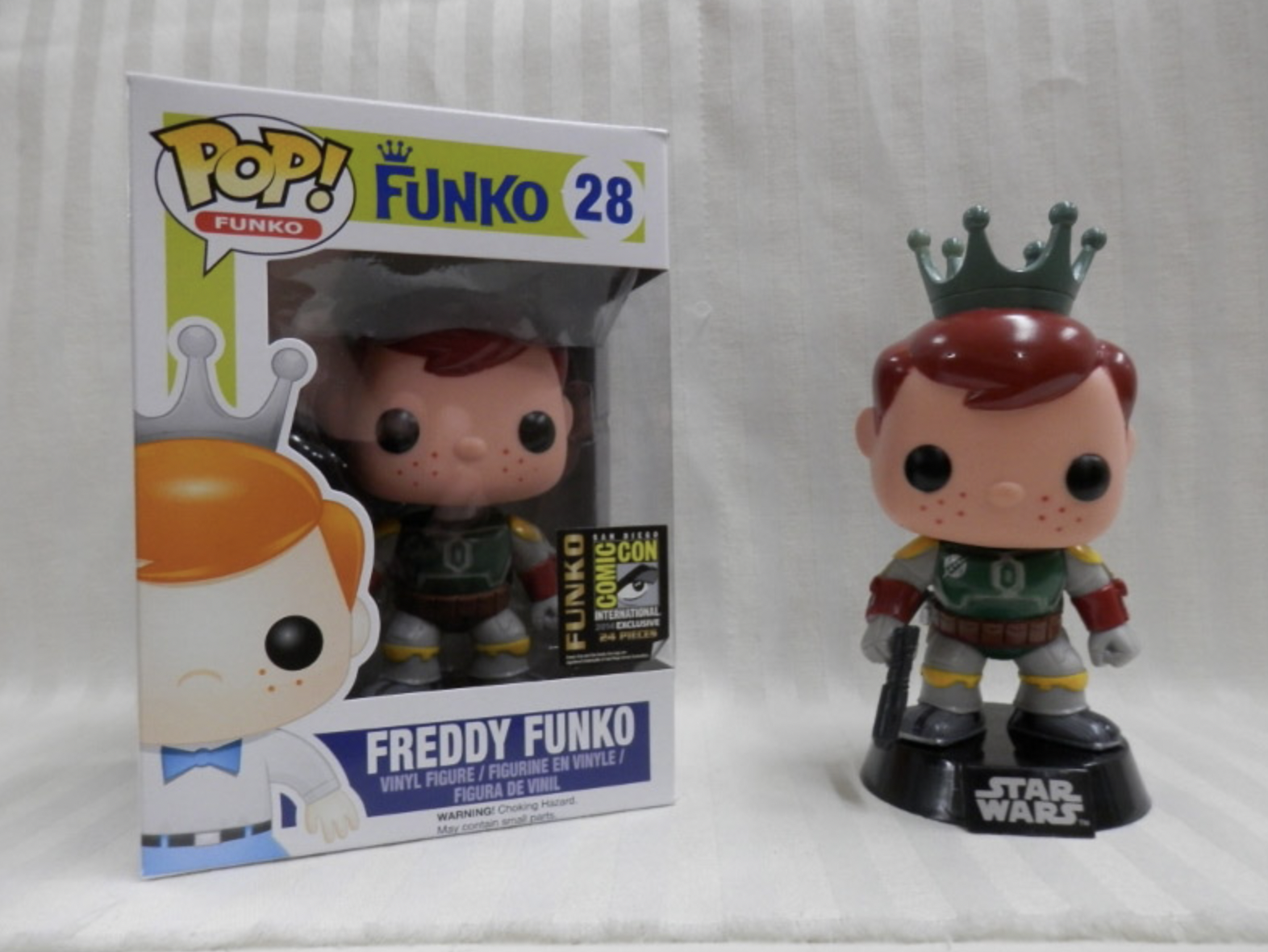 Here is the Boba Fett version of Freddy Funko, complete with blaster gun and green crown. The standard version of this figure is pretty much the same, except Freddy Funko has green hair instead of red hair. The difference in price between the two is about $7,000. So if you grabbed the green-haired Freddy Funko Boba Fett instead of the red-haired one, you’d be kicking yourself. 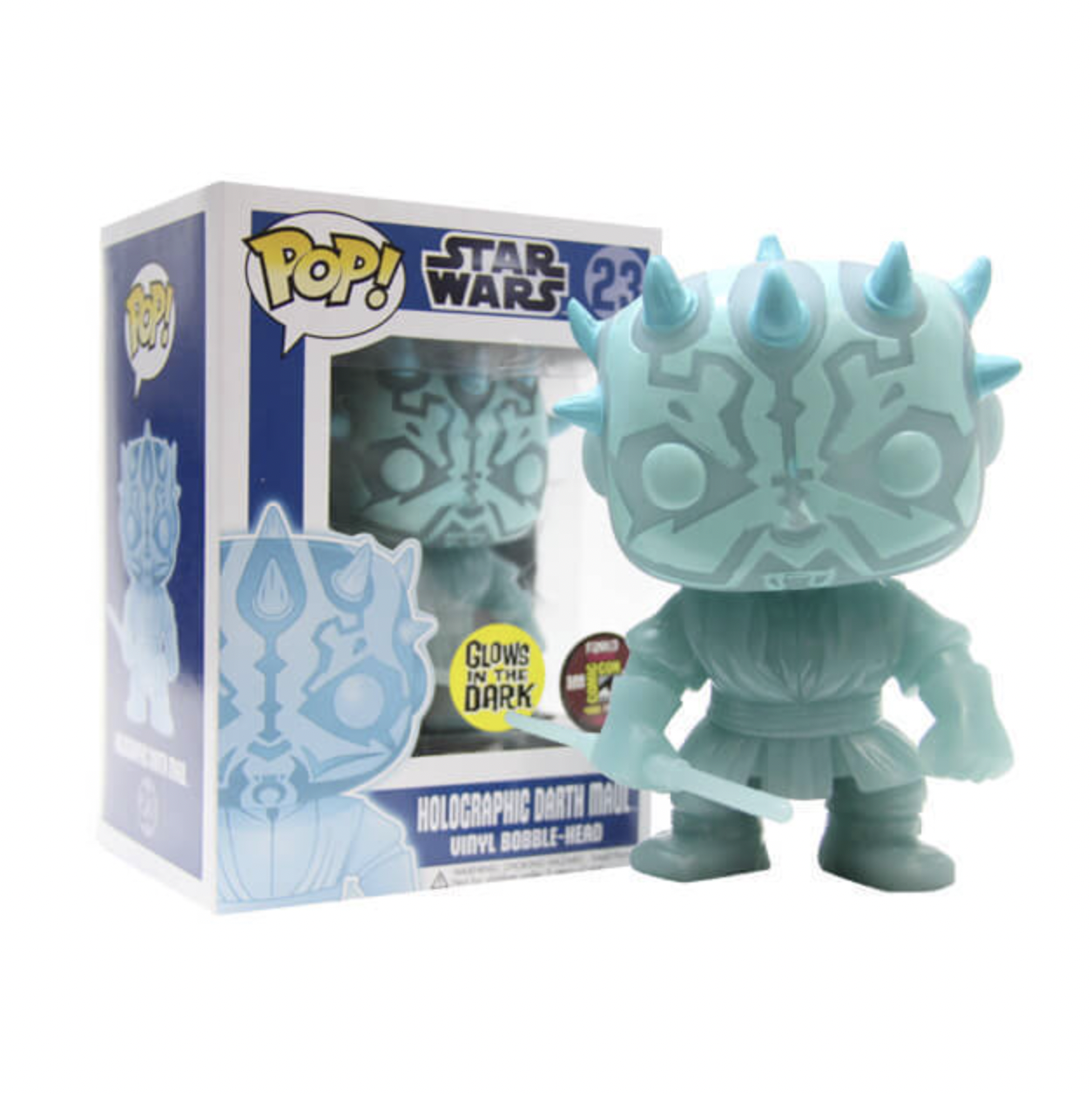 Star Wars Funko Pops are some of the most popular, meaning literally every character has their own figurine. When Funko Pops was still in its infancy, the company released this limited edition Holographic Darth Maul that also glows in the dark. Unlike many special editions, 480 of these vinyl pop figures were made available to people attending 2012’s San Diego Comic Con.

While they sold for the regular price a decade ago, one of these Darth Maul beauties will set you back almost $8,000 today. 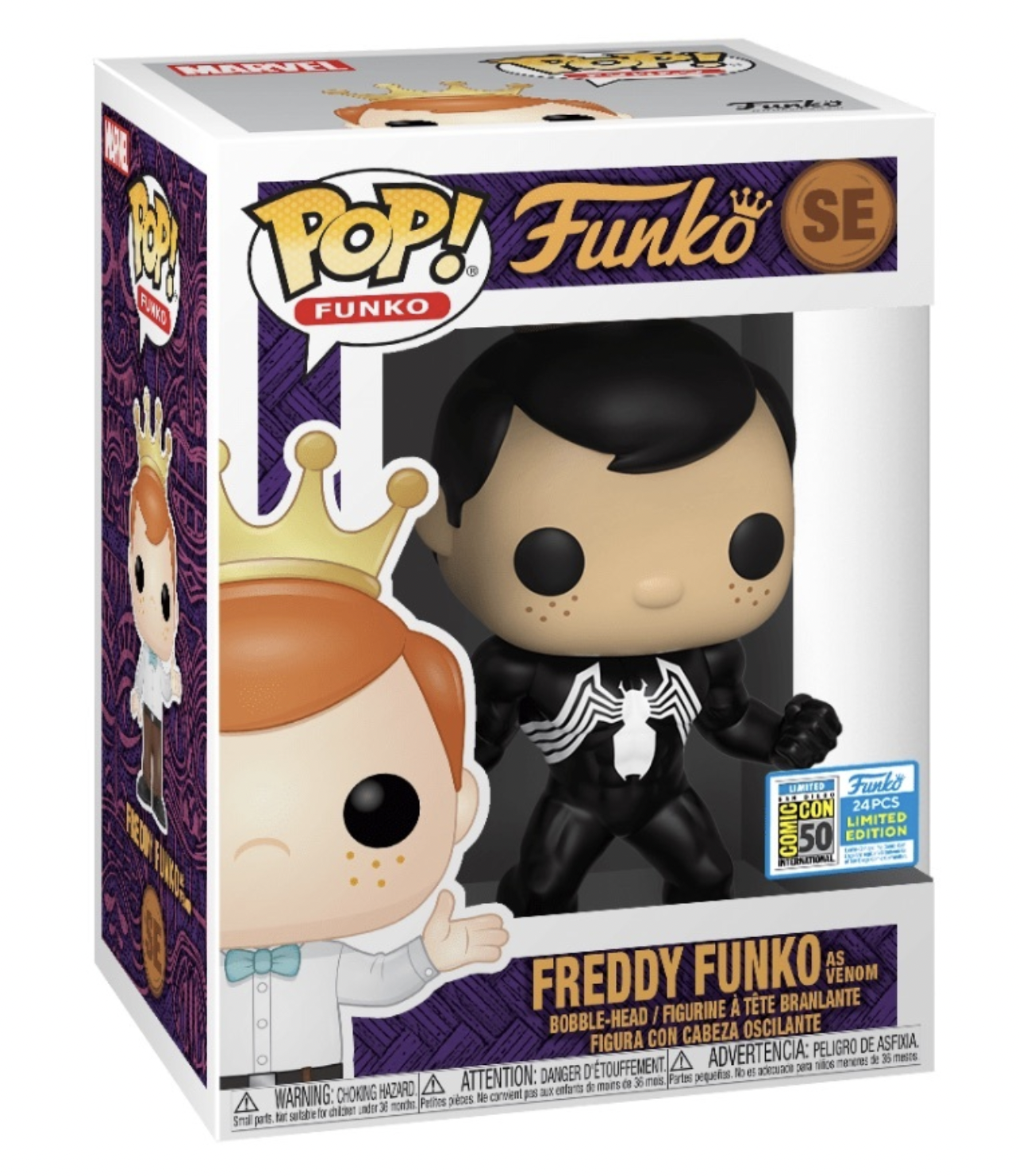 When it comes to rare and expensive Funko Pops, those featuring Freddy Funko are often high on the list. For some reason, they are made in small batches and quickly soar in price. That is the case with this Venom Freddy Funko. Freddy has Venom’s black suit on that matches his black hair. Only 24 of these were made and sold at the San Diego Comic Con in 2019 in celebration of the film adaptation of Venom.

Funko Pop mascot Freddy Funko gets the Game of Thrones treatment with this limited edition Funko Pop. Decked out in Jaime Lannister’s garb, you’ll notice Freddy’s face is splattered with blood, hence the “Bloody.” This figure was released exclusively at the 2013 San Diego Comic Con.

While the average price for this Funko Pop is a touch under $10K, this figure has sold for in excess of $15,000 on eBay, making it one of the most expensive Funko Pops on the market. 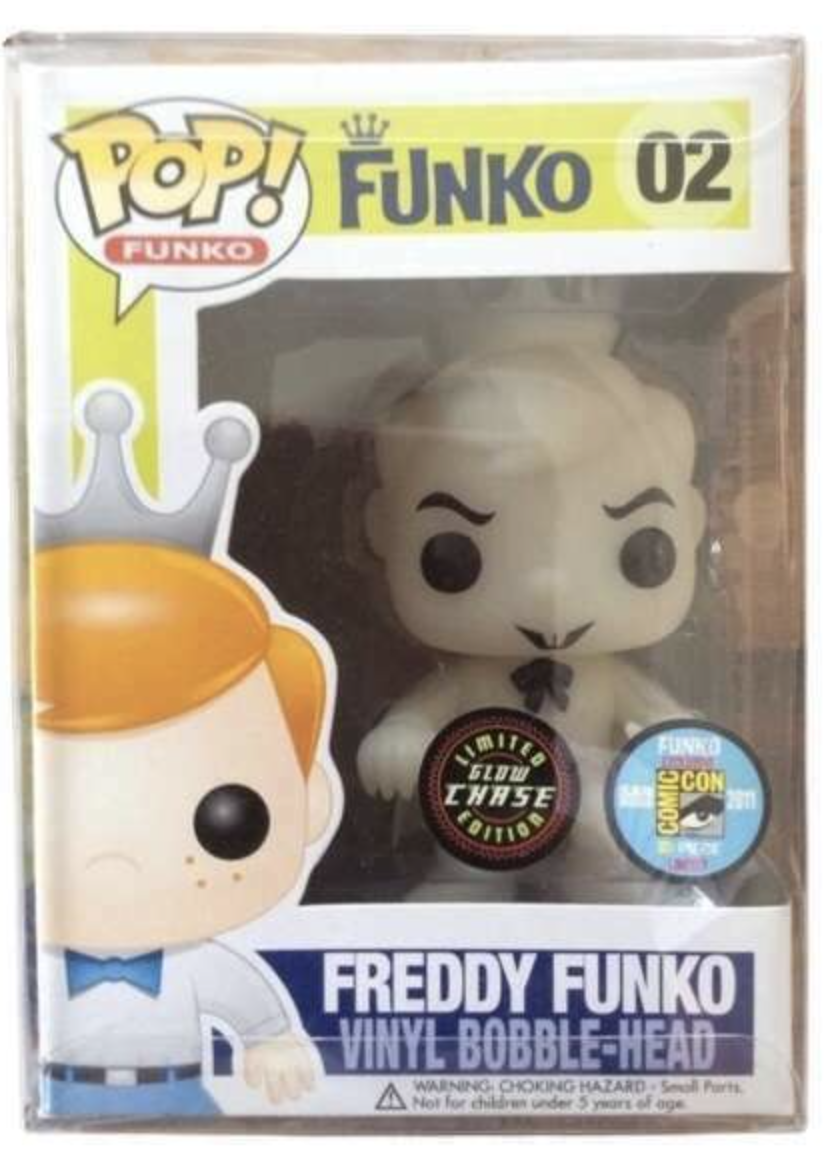 Another Freddy Funko figure, this one is inspired by the vampiric cereal mascot Count Chocula. Unlike the metallic version that sells for around the $3,000 mark, this glow in the dark Funko Pop vinyl of Count Chocula fetches upwards of $10,000. It was originally made available at the 2011 San Diego Comic Con, with only 12 being made. 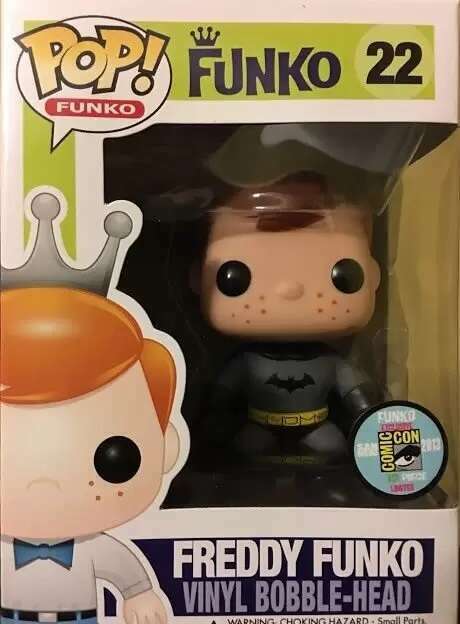 We’ve already featured a Batman Funko Pop on this list, but that one doesn’t compare in price to the Batman Freddy Funko. As the name suggests, this figure is Funko Pop mascot Freddy dressed as Batman. He’s wearing Barman’s old school black and grey suit and has his trusty crown on top of his red hair. This Funko Pop sells for just over $12,000. 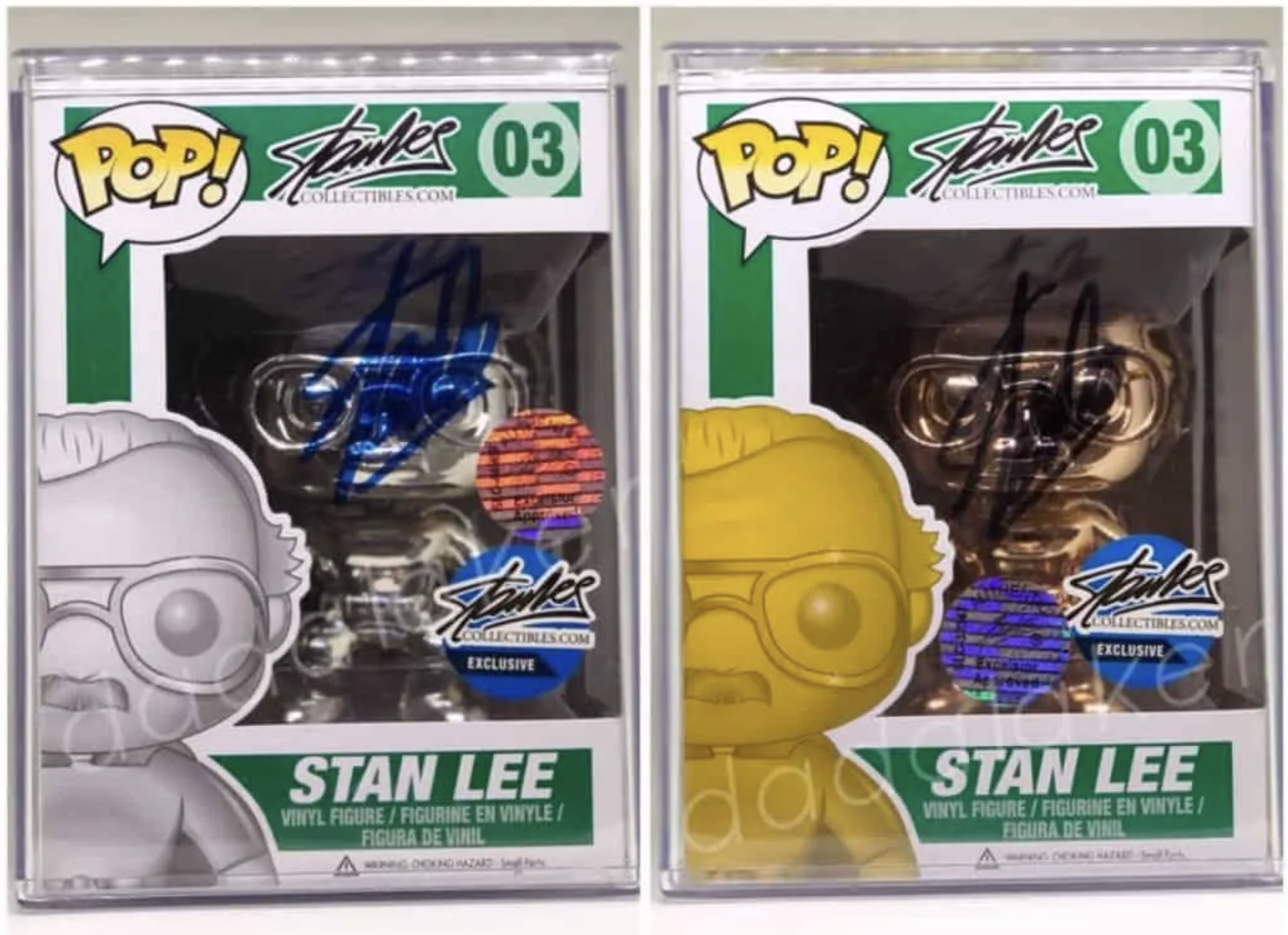 The death of Stan Lee was a blow to comic book fans across the world. The man responsible for some of Marvel’s biggest characters, such as Spider-Man, the X-Men, the Fantastic Four, and Iron Man, is an icon and highly revered for his contribution to the comic world. It’s no surprise then that his Funko Pops went up in value after his passing.

At Los Angeles Comic Con in 2017, a Red Metallic Stan Lee Superhero figure was released and is now worth around $7,000. There were also 10 Platinum Metallic versions of this figure released. They are so rare that the last one advertised was selling for a tidy $20,000. These Funko Pops are also signed by Lee, increasing the value.

This gem is based on Alex DeLarge, the main character in Stanley Kubrick’s Clockwork Orange film. It might be hard to believe, but this little figurine has an estimated worth of $26,000! Yes, you read that correctly.

There are a couple of reasons why this Funko Pop fetches such a high price. Unlike the standard version, Alex DeLarge isn’t holding a cane. This might be a subtle difference, but it impacts the price greatly. The other thing to take into account is that this Funko Pop is glow in the dark. Couple this with its limited numbers (only 12 were made) and you have the most expensive Funko Pop in the world. 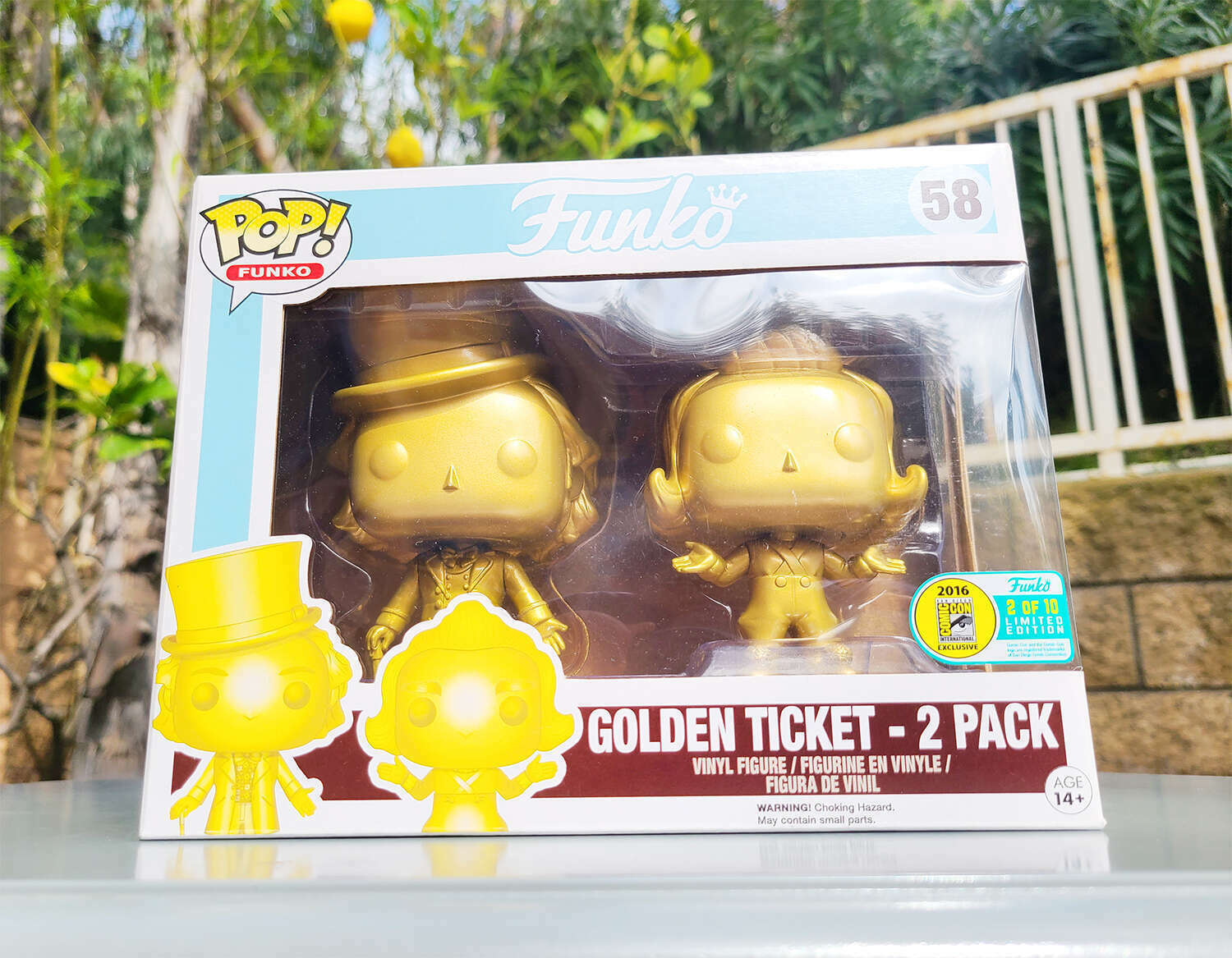 This is the most expensive Funko Pop in the world. Only 10 of these 2 packs were made, featuring Willy Wonka and an Oompa Loompa in gold. People who attended the Funko Fundays held at the San Diego Comic Con in 2016 were given a chocolate bar on entry. Four of the chocolate bars held a golden ticket, with the prize being the gold 2 pack. The other six packs were said to have been gifted to employees of the business.

While it might be hard to put a monetary value on this set, the only one that has been sold went for $100,000 in May 2022, making it the highest-selling Funko Pop in history.