20 Hysterical Minecraft Memes That Are Too Funny

Few games have been as successful as Minecraft over the past decade. The sandbox video game developed by Mojang Studios is a 3D world where players construct structures and engineer machines. There are many different game modes where players can compete solo or work in teams as they undertake various challenges. While the graphics aren’t great, the blocky look of Minecraft only adds to its charms. Another fantastic element of the game is the humor. There are many hilarious moments that happen when playing, which has led to some hysterical Minecraft memes.

While mining and crafting you are likely to come across some funny moments that are often captured in Minecraft memes. This is especially the case if you spend hours playing Minecraft as many children do. The Minecraft community is responsible for a host of these funny memes. These memes revolve around world building and battles with other opponents and are sure to have fans of the game laughing alone. 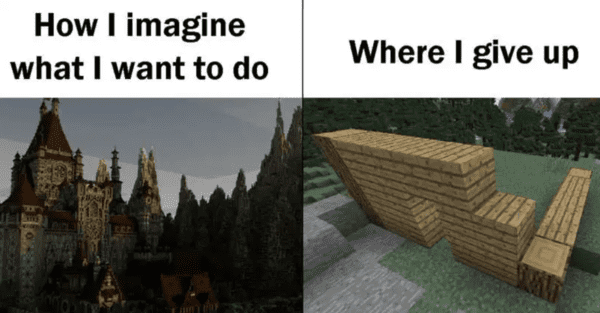 When you have grandiose ideas of what your next structure will look like, only for it to resemble nothing like the design you planned. Despite the technology, sometimes things just don’t turn out the way you want for you and your population.

2. Most Dangerous Job in the World 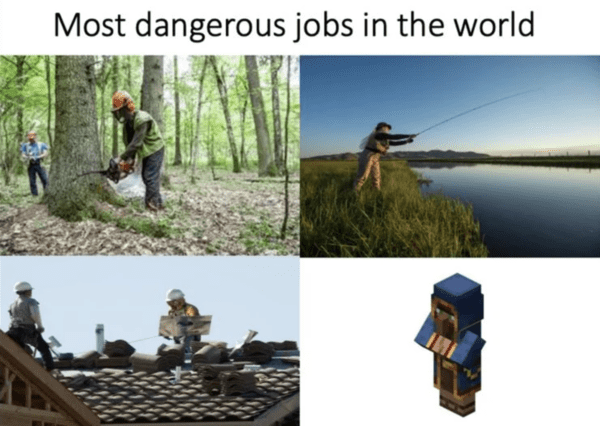 Minecraft Wandering Traders don’t have a great time in Minecraft. They come in and out of the game and are joined by llamas that have no qualms about spitting on you. This thing is something you want to stay away from. 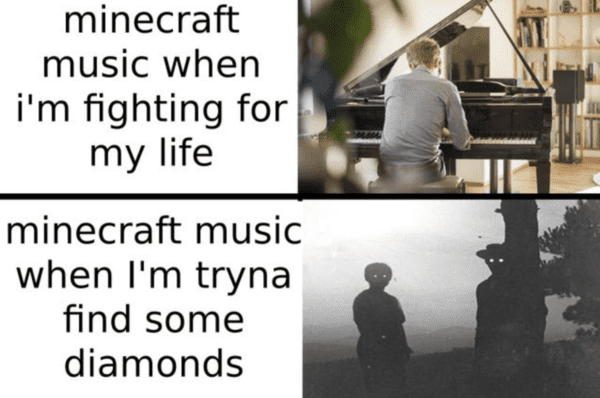 Ever notice how the music changes throughout the game? For some reason when you are faced with danger and fighting opponents, you get some wonderful classical tunes. But when you are trying to find some diamonds, things get eerie. Just another strange part of this popular video game. 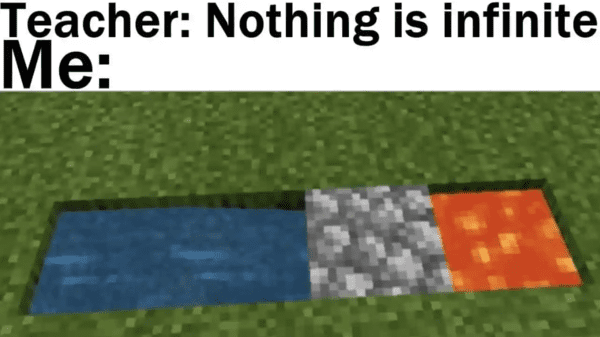 While everything is finite, this isn’t the case in the game of Minecraft. Everything is endless, including res. As a person who plays this gameyou will soon find out that you can find anything and everything. 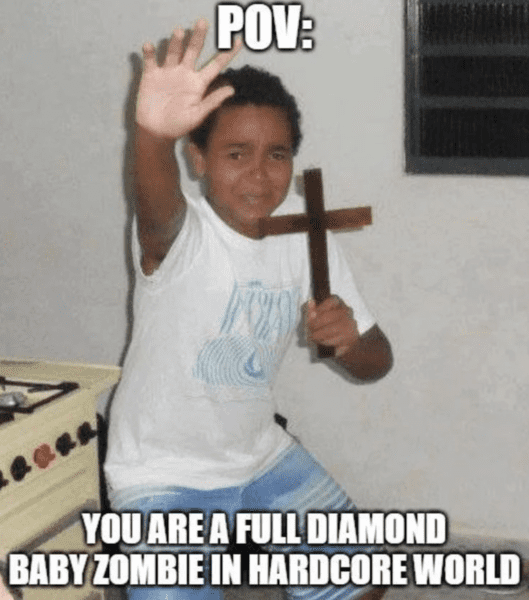 It doesn’t get any harder than hardcore mode when playing Minecraft. Once you have started there is no turning back. One of the worst things you will encounter is a hardcore Baby Zombie. This meme shows how most players look when confronted by this monster while gaming, even when in full armor. 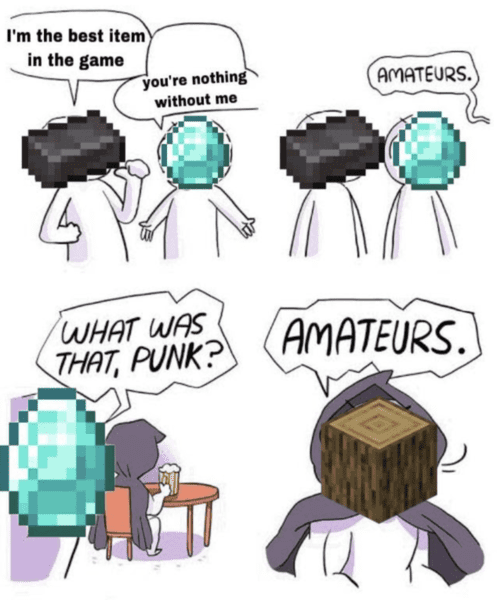 There is a host of different res scattered throughout the world, and this meme is a funny look at which is the most important. No matter what you think, wood is what you need when constructing your new creations. 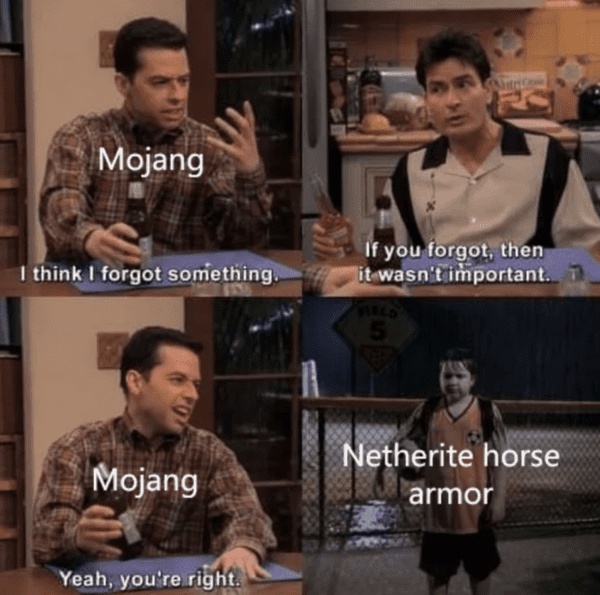 Mojang introduced Netherite to Minecraft recently, and while players were hyped, it hasn’t all worked out the way they wanted. While everything got the update, there is still no Netherite Horse Armor. This has upset many fans who love the game and were hoping for a new tool. 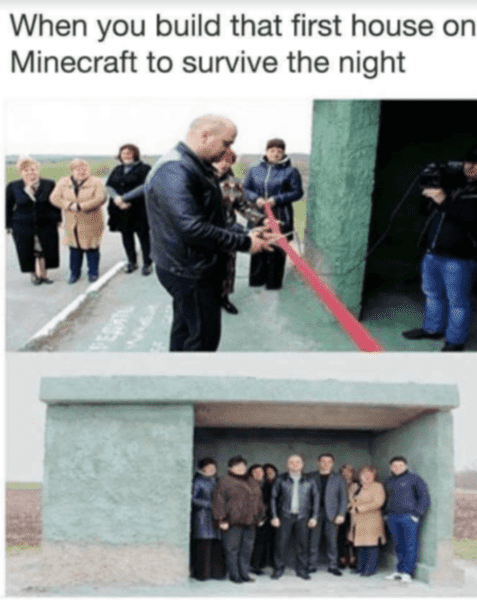 When you finally finish building your first house, more often than not you find yourself protecting other players who need shelter. 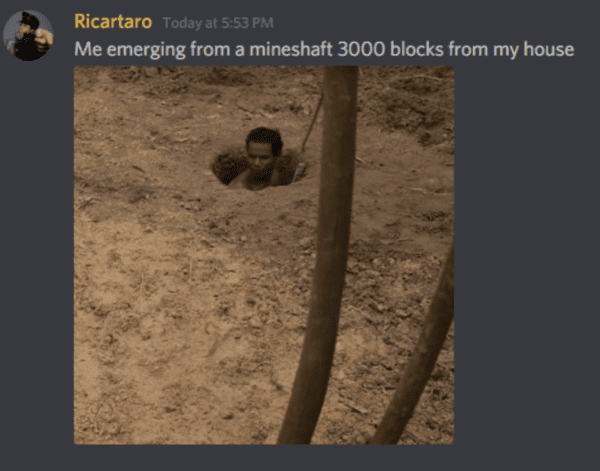 Those times when you emerge from a mine and are nowhere near your actual house. This meme is fact.

Getting lost in the Minecraft world is something that happens more often than not. It’s even worse when lost in the Nether. If you are a young kid playing this video gamejust be careful while exploring or you might find yourself somewhere you don’t want to be. 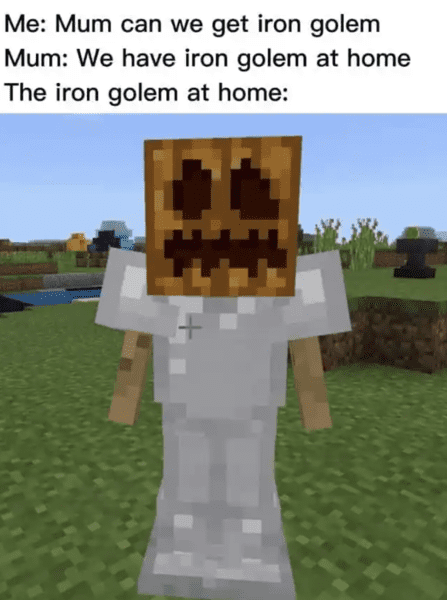 When you want an Iron Golem but your mom points out your Armor Stand and says you already have one. Parents just don’t get it. It can be tough being a kid. 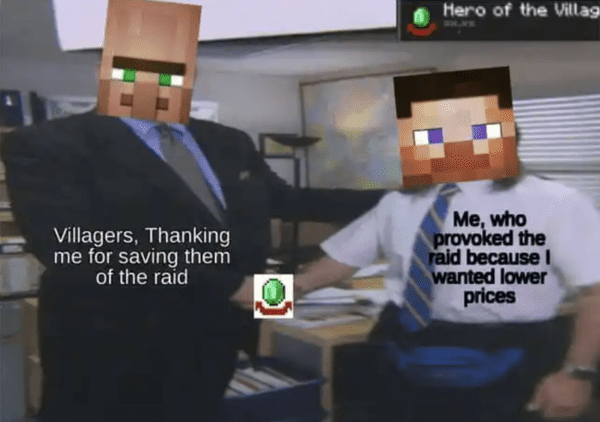 When you help out a village just so you can get some discounts. This great post also references The Officewhich adds another element. 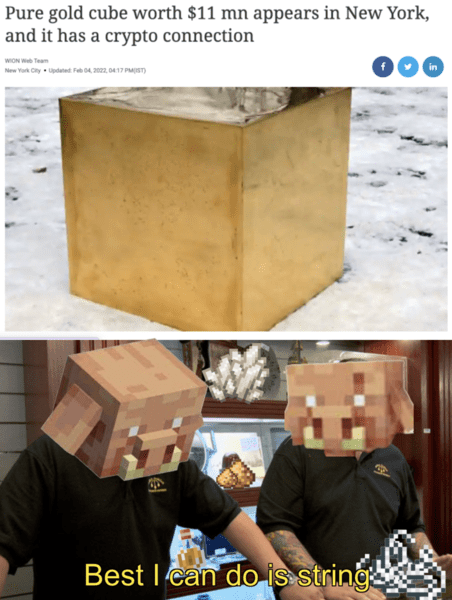 No matter what you have to trade, how often do you really get what you deserve? Not often. This is a great Minecraft meme that shows what life is really like in the sandbox. You don’t always get the re, item, or weapon you need. 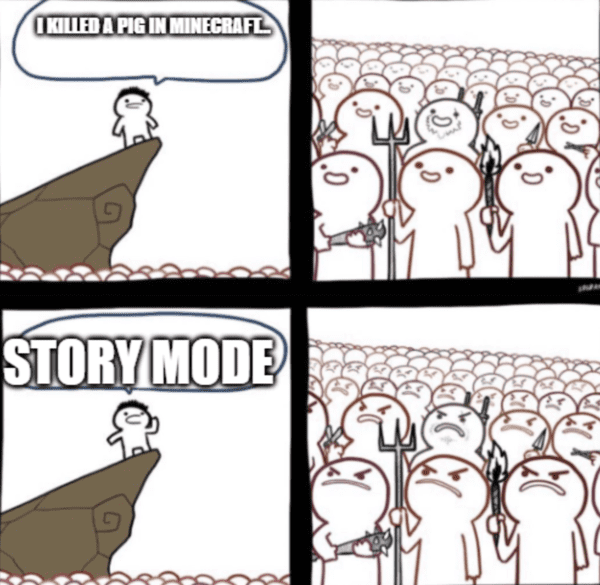 Depending on what mode you are playing will decide how the mob reacts. Just make sure you need the food. 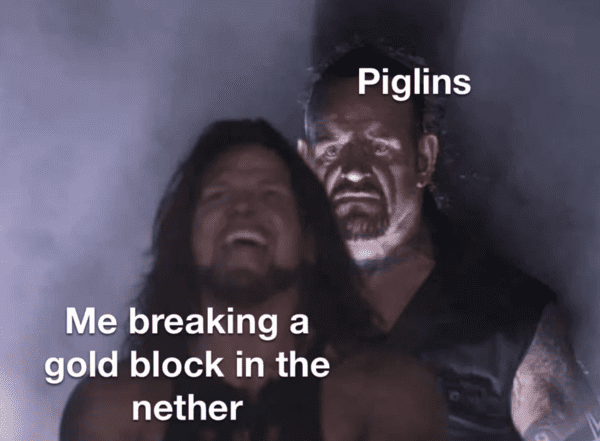 If you find yourself in the Nether, do yourself a favor and don’t go breaking any gold blocks. You might have to deal Piglins. This is a funny meme using one of the classic images from the Boneyard match between The Undertaker and AJ Styles at Wrestlemania. 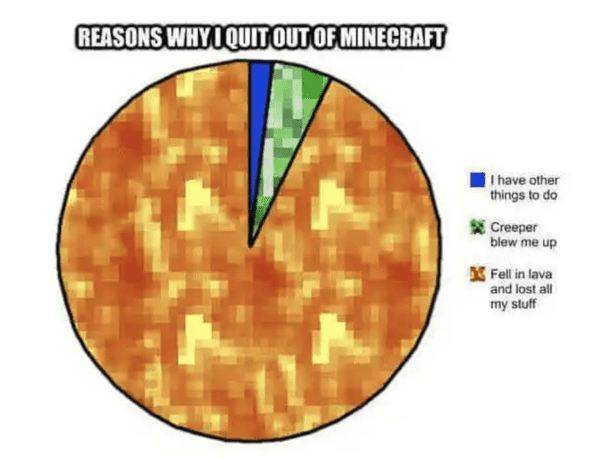 As this meme represents, lava is the main reason why so many people quit Minecraft. It really ticks off players and can bring an end to a great game quickly.

17. Stay Away From the Iron Gollums 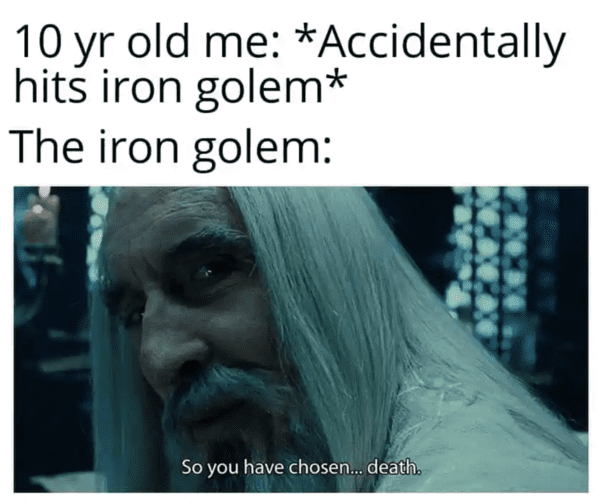 Using an image of Saruman from The Lord of the Ringsthis hilarious meme sums up exactly what it’s like to hit an Iron Gollum. You have chosen death. Whoops. 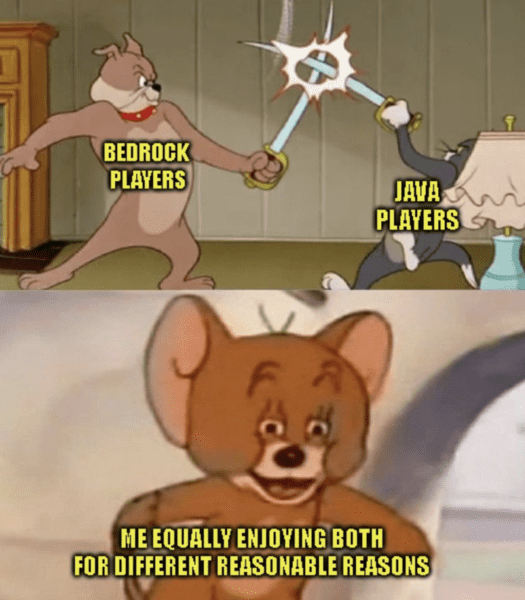 While many gamers argue over which version they think is best, there are some of us who enjoy playing both. 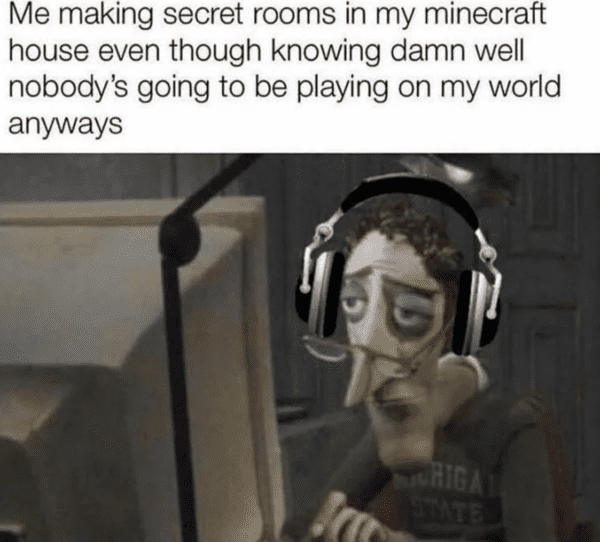 Minecraft players love nothing more than making secret rooms and passages in their structures, even though they know nobody will be visiting. 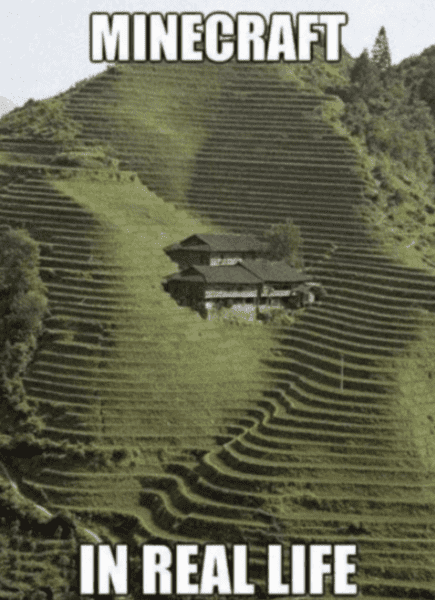 Here’s a meme showing what Minecraft looks like in the real world. Beautiful.