When it comes to memes, Twitter is one of the best places to find them. The social media platform was first conceived by Jack Dorsey. It originally went by the name Twttr, with Dorsey sending the first tweet in 2006. Since then Twitter has become one of the top social media platforms in the world. There are roughly 330 million people with a Twitter account. They use the program to send out messages, images, videos, links, and of course, memes.

When it comes to memes, Twitter users can be ruthless. There are countless Twitter accounts set up to only tweet memes. While there are safety guides and regulations, many Twitter memes slip through the cracks. Hundreds of these memes are also aimed at Twitter HQ and the platform itself. These types of memes have intensified this year after Elon Musk revealed he intends to buy Twitter.

In honor of the social media platform and Musk’s impending purchase, here are 20 of the best memes about Twitter.

1.  The Hobbit In Meme Form 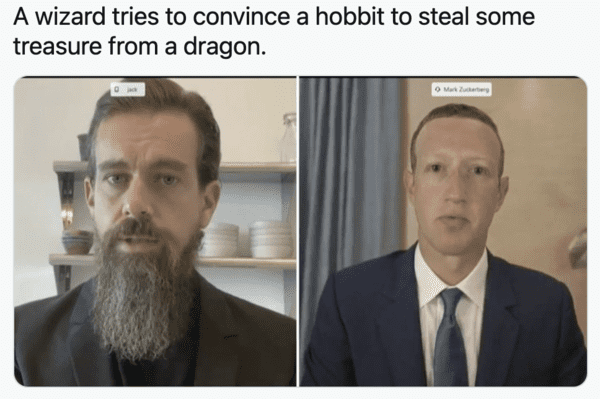 This hilarious meme casts Jack Dorsey and Facebook CEO Mark Zuckerberg as the main charters from The Hobbit.

2. Some Men Just Want To Watch the World Burn 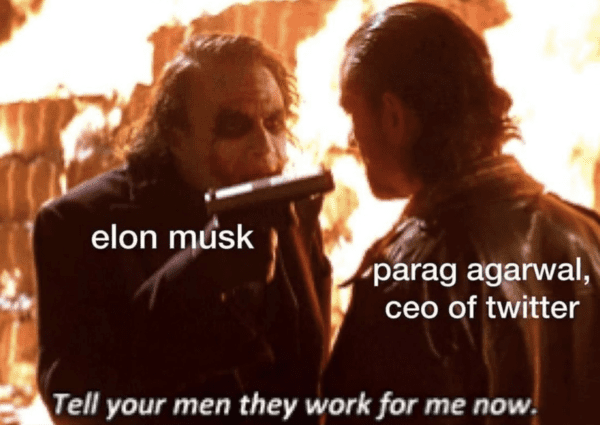 When it was announced Elon Musk wanted to buy Twitter, the internet went into meltdown. It resulted in hundreds of hilarious memes, including this one about Twitter CEO Parag Agrawal. Taking inspiration from The Dark Knightit proposes Musk as the chaotic Joker telling Agrawal he is now in charge. 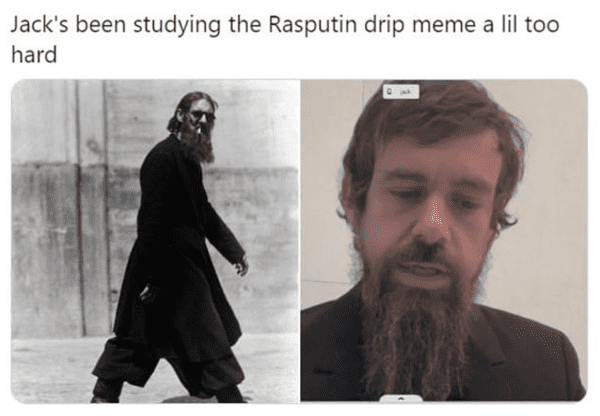 Twitter owner Jack Dorsey went full wild man during quarantine, growing a huge beard. He copped a lot of flack for it, with this Twitter meme comparing Dorsey to Russian mystic Rasputin. The resemblance is uncanny. 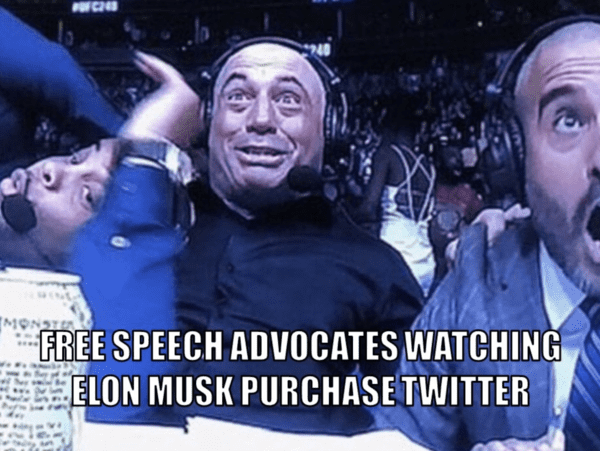 Elon Musk has promised Twitter will uphold freedom of speech. This has the left worried and the right joyous. As this meme points out, those ‘freedom thinkers’ like Joe Rogan are ecstatic at the prospect of tweeting whatever they want without repercussions. 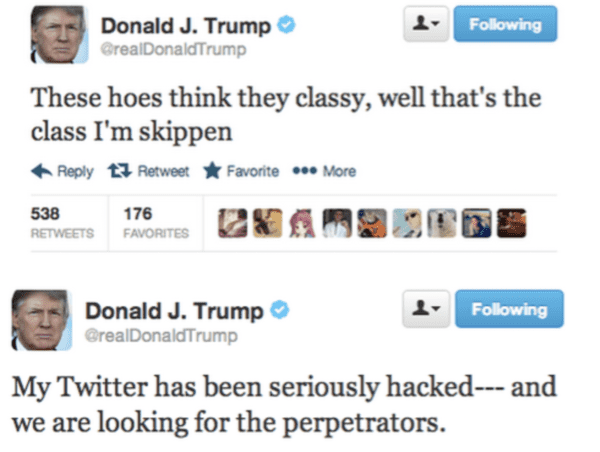 This Twitter post from Donald Trump quickly became a meme. While it could be a fake, it is certainly funnier believing it’s real. 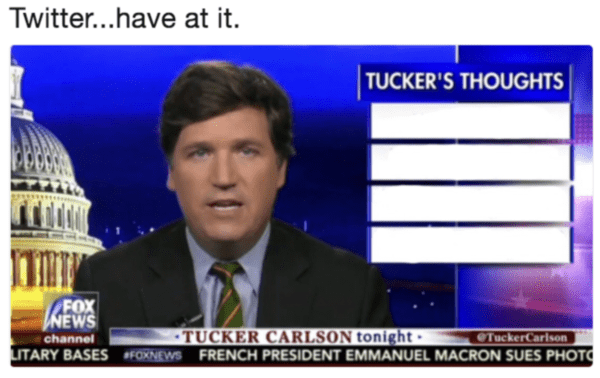 This meme is all about dirtbag Fox News host Tucker Carlson. Twitter user Jesse McLaren created a meme allowing people to fill in the blanks about Carlson’s thoughts. I’m sure there will be some incredibly hilarious responses.

7. Only a Sith Deals in Absolutes 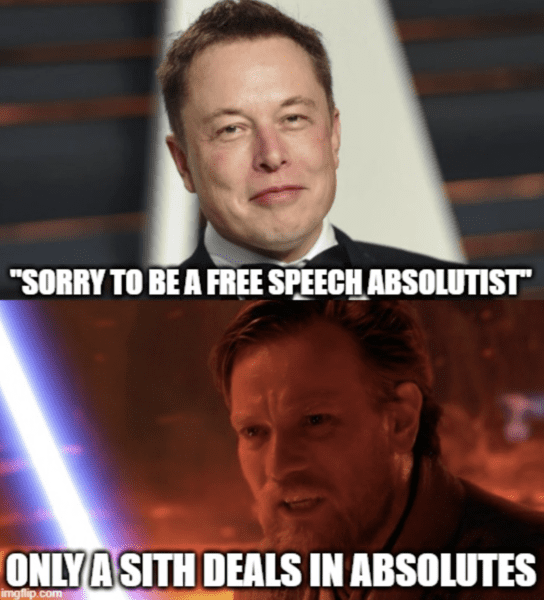 This is another hilarious meme about freedom of speech on Twitter comparing Elon Musk to Anakin Skywalker, aka Darth Vader.

8. Is That Jack Dorsey or Tom Hanks? 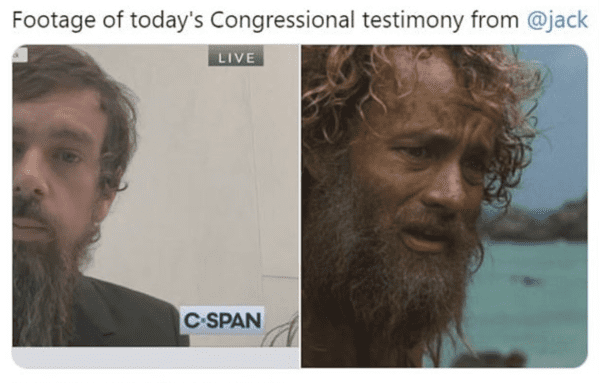 Here’s another Twitter meme about Jack Dorsey’s beard. This time comparing him to Tom Hank’s character from Castaway.

9. Someone is Getting Deported 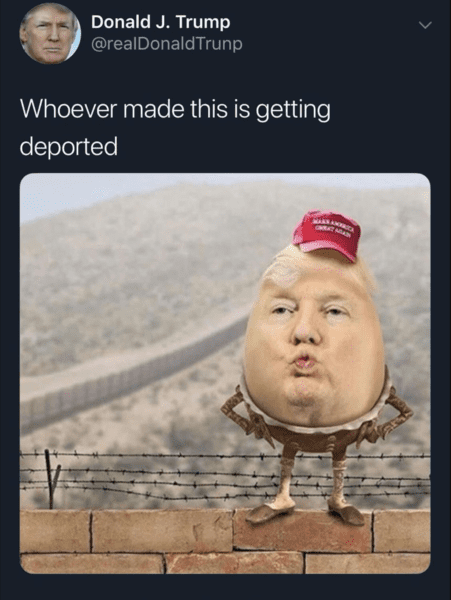 This is a classic meme about Donald Trump that appears to be from the former President. That is not the case though, as this meme comes from a parody account. Still doesn’t make it any less funny. 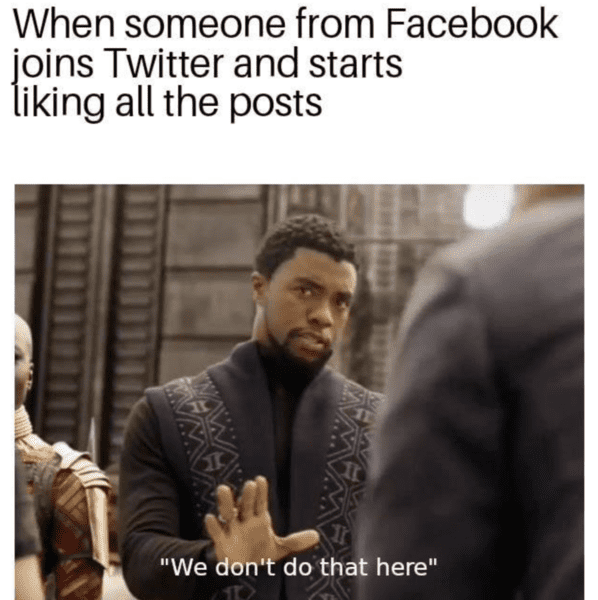 11. The Struggle is Real 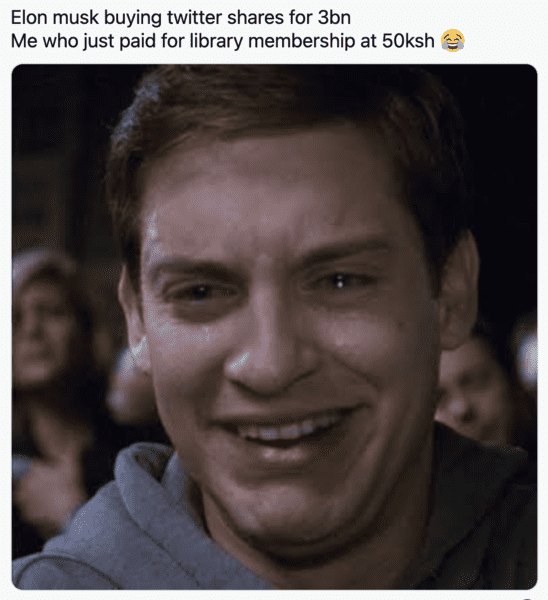 While billionaire Elon Musk can afford to fork out $3 billion for Twitter shares, I’m here struggling to pay for a library membership. 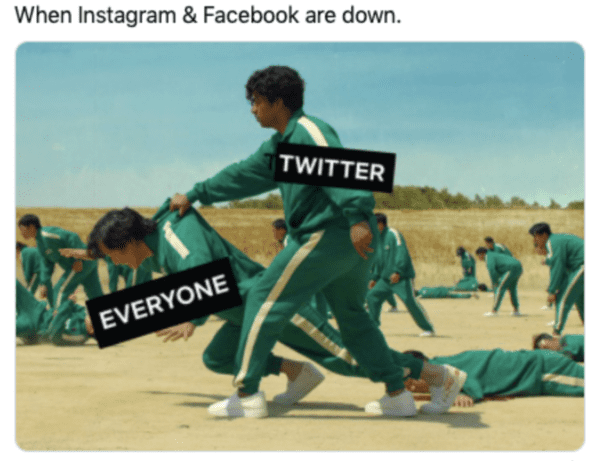 Everyone turns to Twitter when the other social media platforms are down. 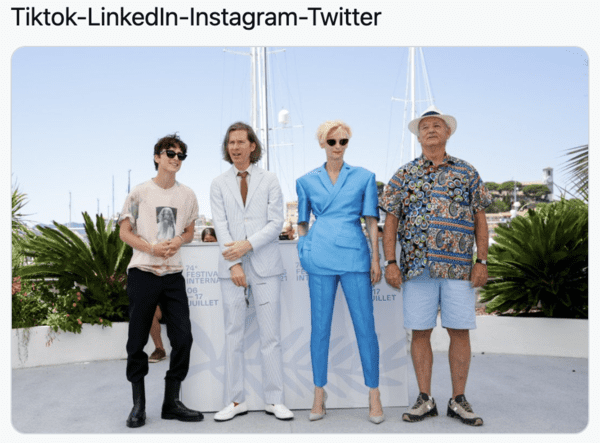 Taking a photo of some of those involved in The French Dispatchthis meme attempts to highlight what each of the four social media platforms – TikTok, LinkedIn, Facebook, and Twitter – look like in human form. Funny how Bill Murray represents Twitter. 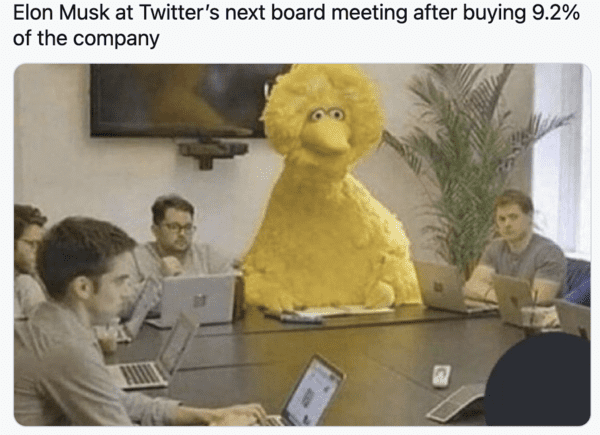 Not everyone is impressed with Telsa CEO Elon Musk buying shares in Twitter. This meme depicts what he may look like in a board room. Hint: he’s Big Bird. 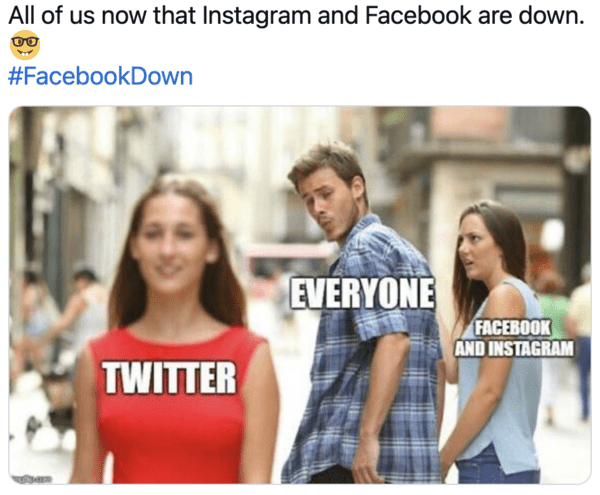 Here is another meme taking the piss out of Facebook when it crashed a few years back. It uses the iconic ‘distracted boyfriend meme’ and has Facebook and Instagram users distracted by Twitter. A very funny social media joke. 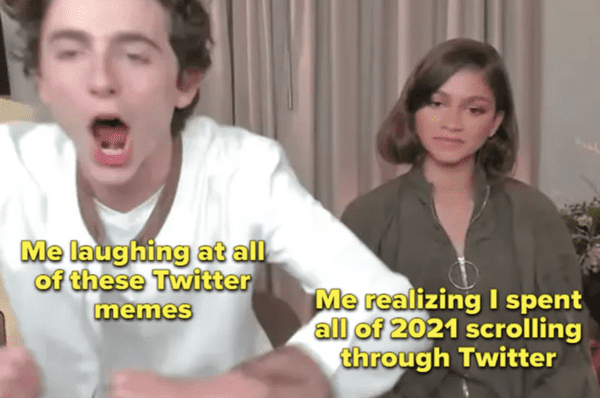 2021 was a shitshow thanks to COVID-19. Most of us spent large portions of the year trapped at home. Thank god for Twitter. Taking a funny image of Timothée Chalamet and Zendaya, this meme is a before and after meme about scrolling on Twitter and then realizing how much time you wasted. True, but it was worth it. Right?

17. I Had Followers Once 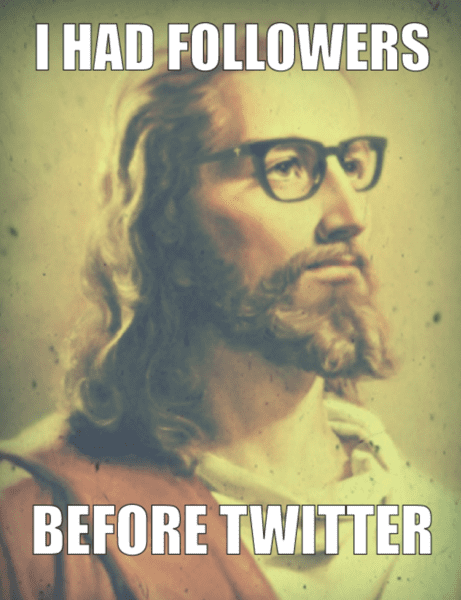 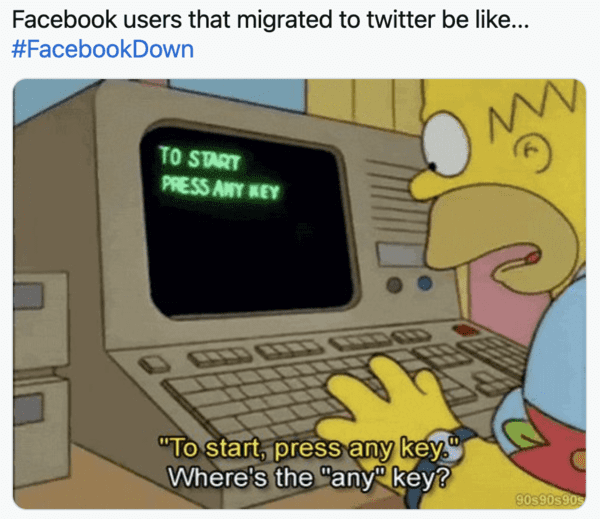 Here is another clever Twitter meme about Facebook going down. When it happened, many people fired up Twitter for the first time as having no social media was unbearable. This meme shows what they were like trying to come to grips with how the platform works. 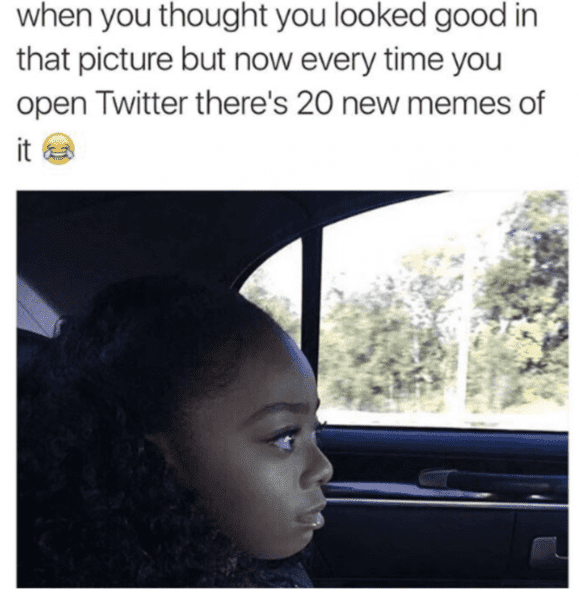 People love making memes out of their friends, especially when they post a picture of themselves they think is fly. This meme sums up that feeling of getting paid out perfectly. 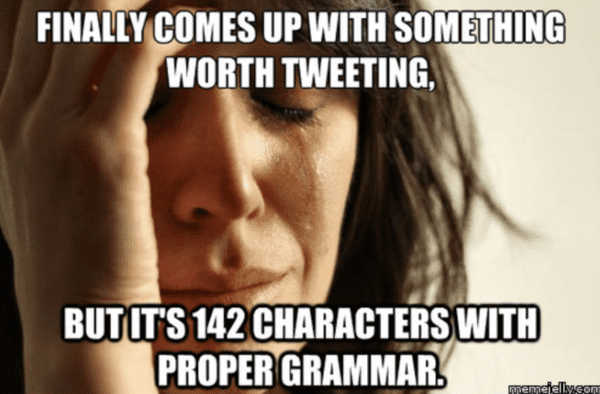 It sucks when you run out of characters after composing the perfect tweet.