Known as the most populous city of Bavaria, the beautiful city of Munich comes with a heterogeneous mixture of modern and historic food. With such an enriched history, this Bavarian Capital offers a wide range of cuisine to suit your taste. While Germany is known for its beer all over the world, German dishes are also famous for their rich variety. The food in Munich is loaded with nourishing ingredients of the Bavarian kitchens and the traditional touch of Germany. See what all delicious items you must try here with a mug (or two) of German beer!

Here are some of the famous food items of this Bavarian capital that you and your amigos must get a bite of when you’re vacationing here. 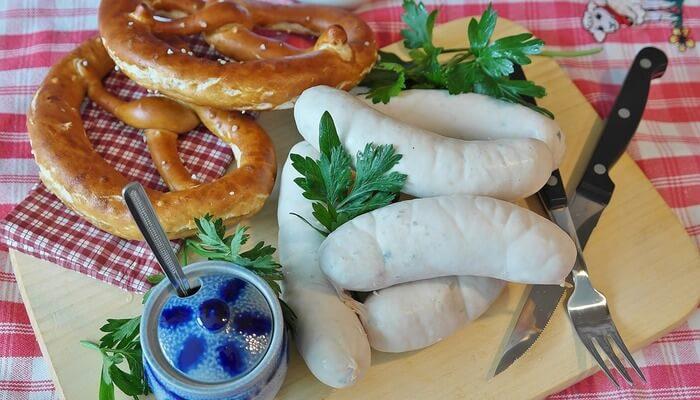 The Weisswurst is a local Bavarian white sausage, which is made with minced veal and pork bacon and additionally flavored with onions, ginger, lemon, parsley, and cardamom. However, unlike the normal sausages, these ones generally get easily spoilt, as they are not smoked. The dish is served in a bowl containing hot water along with Bavarian sweet mustard and pretzel.
If you have not tried this special Bavarian delicacy before, then you should know the proper way of eating Weisswurst.

Must Read: 14 Best Romantic Places In Munich To Surprise Your Partner On Your Next Vacay In 2020! 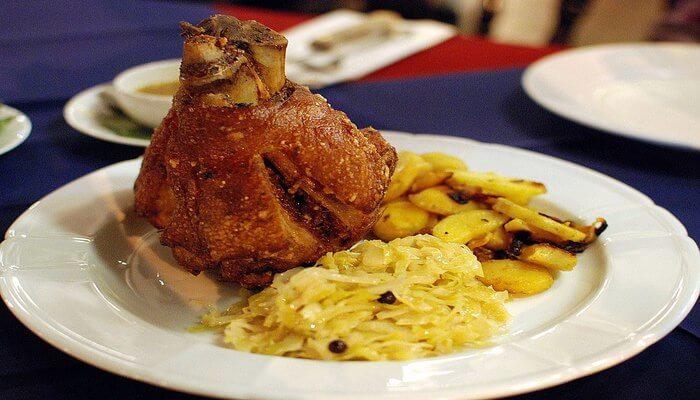 A Schweinshaxe is roasted ham hock, which is the end of the pig’s leg. It is also known as Eisbein. This food is quite famous among the locals because of its inexpensive ingredients and tough cuts of meat. The meats are marinated for days to bring out the flavor. Schweinshaxe is normally served with potatoes and cabbages. If you want to try out the traditional local and cheap food in Munich, then Schweinshaxe should be your go-to option.

Suggested Read: 10 Extravagantly Beautiful Munich Festivals That Will Give You Major FOMO 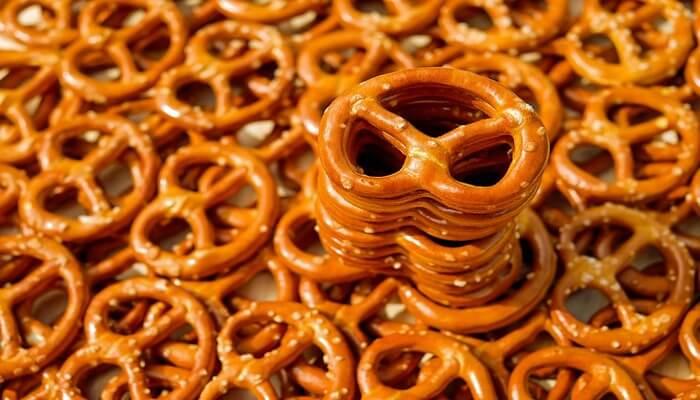 A pretzel is a type of German baked pastry, which is made up of dough. It is one of the most reviewed foods in Munich. It has a specific traditional shape, which is generally made by intertwining the two endings of dough and then, by twisting it back again. The seasoning of a pretzel is mostly salted, but it is also served with cheese, sugar, chocolate glaze, cinnamon, and nuts.

There are a lot of methods of eating pretzels. You can eat it alone, or you can use different types of dips to add flavor. Among them, the yellow mustard dips are the most used flavor. Some people like to add toppings on their pretzels, such as raisin, jalapeno, parmesan, garlic, cinnamon sugar, etc. So, if you are in Munich, then do not forget to try every type of this Bavarian cuisine along with the famous German beer.

Suggested Read: Snowfall In Munich: A Perfect 2019 Guide To Soak In More Bliss In Snowy Germany 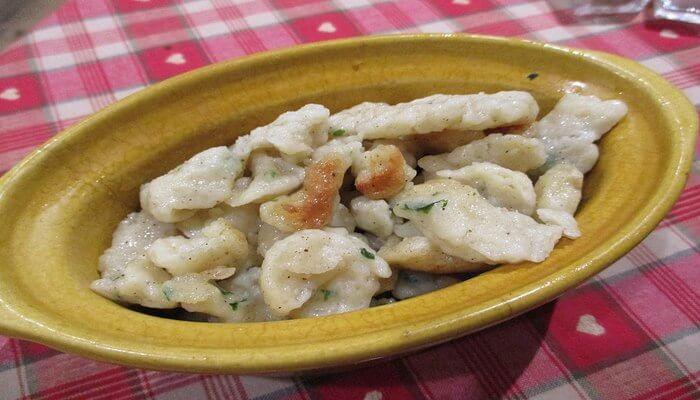 Spaetzle or Knopfle is a type of pasta, which is generally prepared with fresh eggs. It tastes slightly similar to the chewy dumplings and is often served with cheese and fried shallots, or in some cases, with slices of bacon. But, mostly, Spaetzle is served with vegetables, so if you want to try traditional foods in Munich for vegetarians, then make sure to try this one. They serve Spaetzle with fried onions or spinach toppings. Kasepatzle is another variation of spatzle, served with cheese. 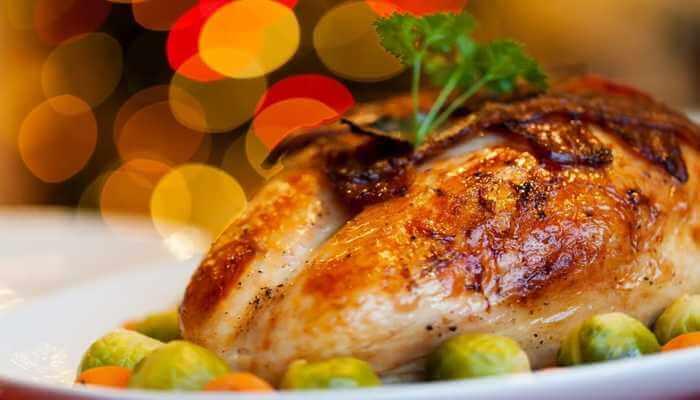 Even though Munich is famous for its pork dishes, but one cannot possibly ignore a roasted duck. It is seasoned with salt and stuffed with parsley, followed by grilling as a whole. A hendl is generally served with potato salad or a brazen. Along with beer, hendle is a famous combination to eat in Munich. However, Hendl is essentially a street food of Munich. Therefore, whether it is a supermarket or a food truck, you can get this lip-smacking food almost anywhere in the Bavarian capital.

Suggested Read: 10 Amazing Places For Shopping In Munich For The Times You Need Retail Therapy 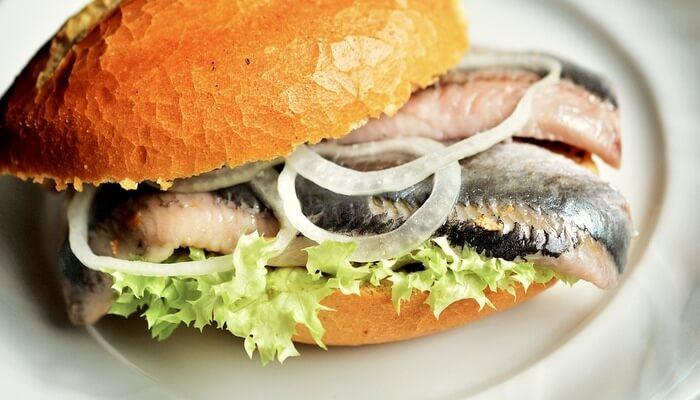 It is a type of quick snack, which is made up of buns stuffed with all kinds of seafood. These kinds of seafood such as fish, crabs or shrimps are minced and marinated with mayonnaise and onions, followed by tucking into a semme roll. The sandwich fillings can either be smoked or fried. It is a famous cheap food in Munich prices due to its easy availability, low cost and quick serving time. So, if you are a seafood fanatic, then make sure to take a quick grab of Fischbroetchen during your time in Munich.

Suggested Read: Munich Travel Guide: A Curated Collection Of All That The City Has To Offer 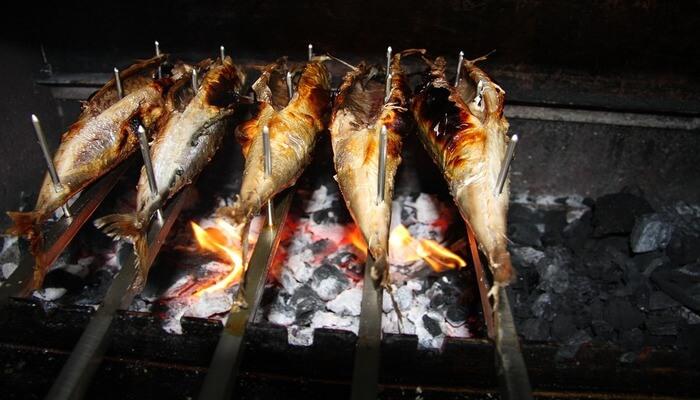 Steckerlfisch is a very tasty and cheap food in Munich that can treat your appetite perfectly. It is a traditional dish of Bavaria and is often grilled on a stick. It is a famous dish, which is served during the Oktoberfest in Munich. It is a local fisherman dish made with freshwater fish.
Conventionally, this dish is generally prepared from the local fish of Bavaria, such as whitefish or coregonus. However, nowadays, numerous restaurants also use various other fishes like mackerel, trout, and fingerling.

Suggested Read: Munich In Summer: Your Personal Guide For A Soothing Germany Vacay In 2019 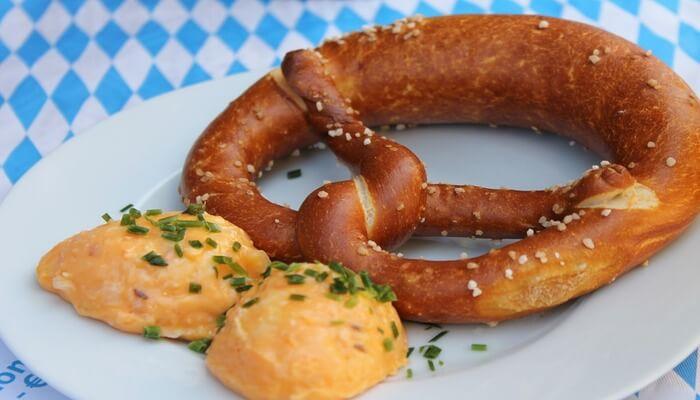 Obatzda is a Bavarian dessert, which is usually made by mixing two-thirds of aged soft camembert cheese and one-third of the butter. It is mostly seasoned with sweet or hot paprika powder. Sometimes, the cooks also use salt along with a small quantity of beer for seasoning. Obatzda is mainly served with the pretzel. 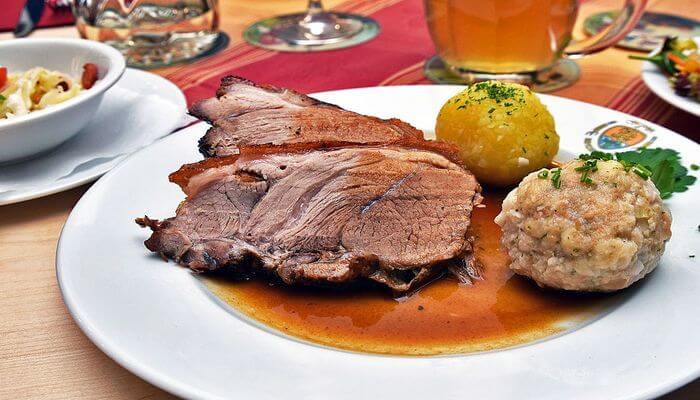 This is a classic food in Munich for non-vegetarians, as it is served with Schweinshaxe or schweinebraten. Knodel is a soft dumpling softball, coated with potato or flour. The specialty of Bavarian Knodel is that it is made with grated or mashed potato in dough form and then mixed with eggs and flour. These are as large as a meatball and served as steamed or boiled with meat or soup.

Where: Wirtshaus in Der Au

Suggested Read: 15 Best Things To Do In Munich In 2019 For Treating The Culture Vulture In You! 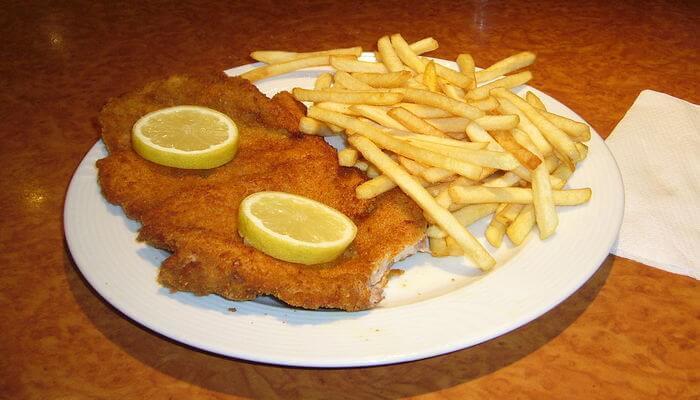 A schnitzel is a slender slice of fried meat, which is served with mashed potatoes or sauerkraut. It is a type of cutlet. However, it is generally made by grilling or roasting. In most of the cases, the meat is of veal or pork. Nevertheless, sometimes, the cooks also use beef, mutton, or turkey to prepare this dish.
Where: Hofbrauhaus

Suggested Read: 10 Day Trips From Munich That Are Worth Taking Once In 2018! 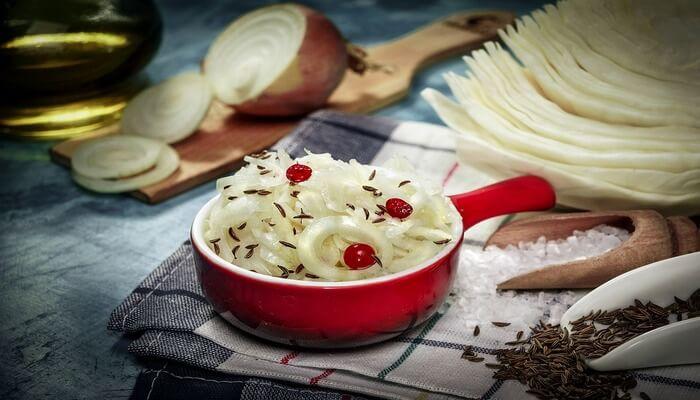 Sauerkraut is a famous Bavarian food in Munich for vegetarians. It is served as a side dish along with the main meal course. After mashed potato, it is the most famous versatile side dish. It is a sour dish, made up of finely chopped, fermented cabbage; mostly served with sausages, pork dishes and so on. Bavarian sauerkraut is infused with the addition of onions, pork fat, and grated apple.

Suggested Read: 9 Stunning Places To Visit Near Germany For A Dreamy Europe Vacation In 2020 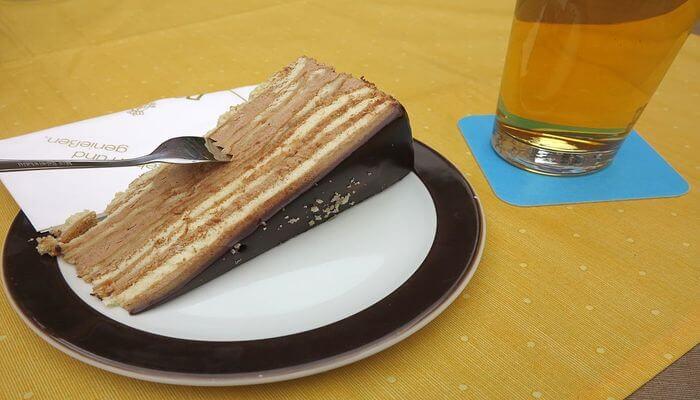 It is a Bavarian sweet dessert, which is made up of eight layers of biscuit with chocolate cream. Germans can eat anything with beer and this is not so different from that either. This dessert is often eaten as a quick bite or to spend time with friends. Because of its mouth-watering taste and sumptuous look, the Prinzregententorte is extremely famous among both locals as well as tourists. There are a lot of confectionary shops in each corner of Munich where you can go and try out this amazing dessert.

Suggested Read: 9 Wonderful Places To Visit In Frankfurt: See The Best Of Germany In 2020 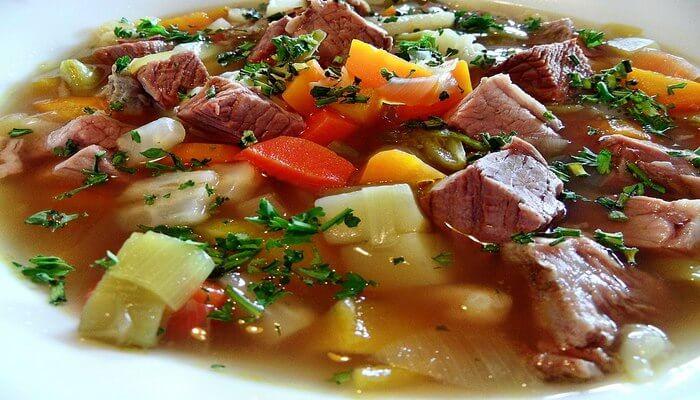 Munich is not just about expensive places and restaurants. It has a lot of places that can offer you numerous cheap yet best foods in Munich. So, if you’re traveling for a while and have tasted almost all of the options available to you, then you can try the Bavarian soup. These Bavarian soups are not just healthy but also pocket-friendly too.

With very little expenses, you can get some eclectic varieties of this soup too. It offers everything you want in your soup. Be it vegetable ingredients to different types of meats, you can add anything you want with the soup. Along with making your taste buds happy, it can also help you to get over your strong German hangover, which is an added bonus of it. 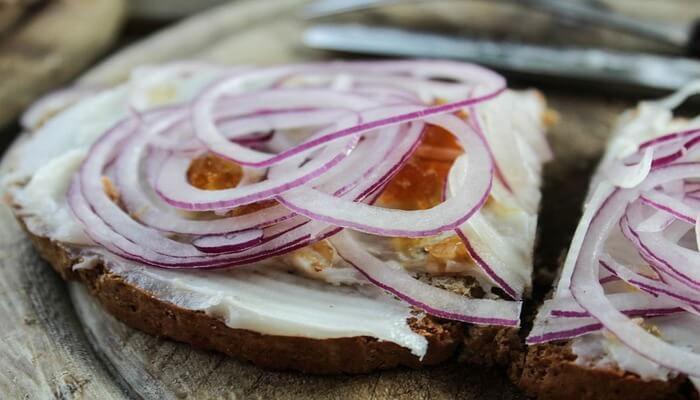 Lard is a mandatory spread dish that can be found in any Bavarian’s fridge. This is an economic food in Munich price to try if you are low on budget. It is generally served with crispy dried onions. However, numerous restaurants in Munich also serve it with dried apple flakes. Along with its budget-friendly character, it is also nutritious and delicious. This spread dish is mostly eaten early in the morning or in between meals. It is served with the German bread or roasted full wheat bread with sunflower seeds.

Suggested Read: 7 Villas In Germany For A Luxurious Holiday In Europe You’ve Always Dreamed Of 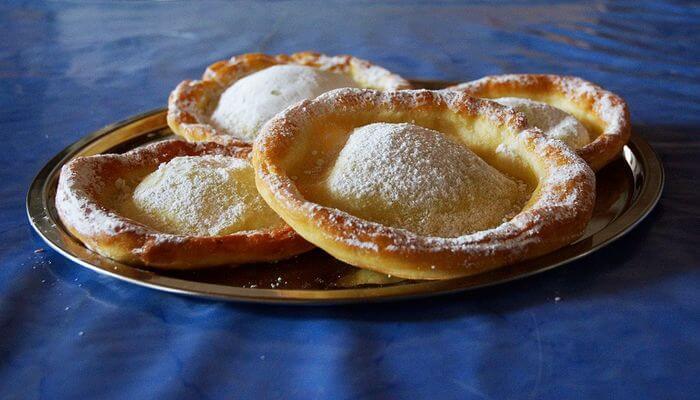 Kniekuchle is a quick fried snack made up of dough. This snack is known as a dozen of other names like Auszogne, Krapfen, Kuchl, Rottnudel, and Schmalznudel, etc. This is a thin disc of fried dough, mostly thinner in the middle compared to the sides and topped with sugar or cinnamon sugar. People often compare it to a Bavarian donut, but they are not that sweet. This is often eaten with beer sauce or coffee. However, many locals also like to savor its taste with Knodel or any other side dishes.

Further Read: 5 Waterfalls In Germany To Witness The Charismatic Beauty Of Nature

Make sure you try each and every items on this small list of food in Munich to taste the diverse flavors and culinary experiences this place offers. Try them at the places mentioned for an authentic and affordable dining experience on your holiday in Munich.

Q. Is there any restaurant in Munich that offers vegetarian food?

Q. Is there any restaurant in Munich that offers food with alcohol?

A. Almost all of the restaurants in Munich offer beer along with food. The Bavarian capital is actually famous for its great brewery history. It’s always easy to get alcohol in Munich compared to other cities.

Q. Which types of red meats are available in Munich?

A. Munich has a lot of meat dishes to offer. Among them are veal, beef, and pork.

Q. Is there any specific time to eat Weisswurst?

A. Weisswurst is a low boiled or lightly steamed white sausage. As it is not properly boiled, it easily gets rotten by the afternoon. So, it is better to eat Weisswurst before noon if you have made it in the morning.

Q. How is Weisswurst eaten?

A. There is no particular method to eat Weisswurst. You just have to peel the skin properly before devouring this food.

Q. Where is the best Steckerlfisch served?

A. Steckerlfisch is a traditional grilled fish dish which is mostly famous by the names Fisherman Dish or Camper Dish. You will get the best Steckerlfisch during Oktoberfest.

Q. Which type of beer is a must-try in Munich?

A. The most famous types of beer served in Munich are:

Ancient structures and treasures in Turkey