A newly formed state in India, Telangana has a reputation of having its core in holiness. The state was ruled by many dynasties namely the Kakatiya, Chalukyas, and the Mauryas. These kingdoms have left their imprint on the state and their legacy now lives in the popular places of worship. The various temples in Telangana are solid examples of grandeur and marvel. Boasting of an amazing architecture these shrines also have loads of stories veiled between them, giving them an interesting angle.

Every place of worship across the country has a unique aspect to them which pulls millions of people from near and far. Apart from the peace and tranquil environment surrounding these holy institutions, the destinations are also rich in heritage. The temples in Telangana evoke such architectural wonder that amplifies its beauty. The state has many places of worship to its name and to make your travel itinerary more diverse we have churned out a tailored list that contains some of the renowned places for pilgrimage. 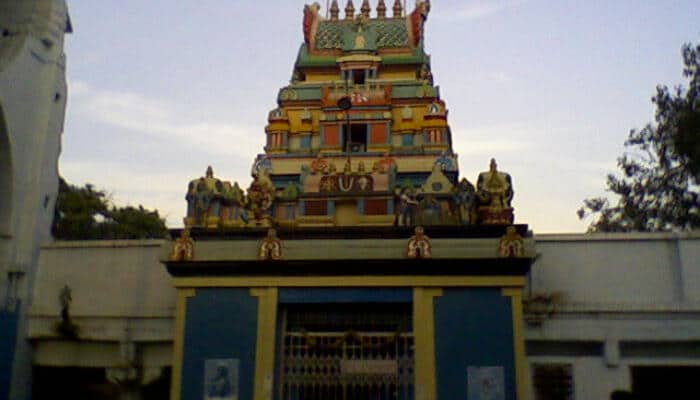 Chilkur Balaji, also called Visa Balaji is a temple located 25 km from Hyderabad. One of the most dominant temples in Telangana, the place of worship has many stories associated with it. One of the most popular stories that make round is that anyone who places a wish in the temple can get it fulfilled after 11 successful Pradakshanas.

Another very popular yet eccentric story is that offering prayers at this very temple grants you a Visa to the US successfully. Located on the outskirts of the state, the presiding deity of the temple is Lord Balaji who is also called “Visa Balaji” affectionately by the locals here.

Must Read: 20 Mesmerizing Hill Stations In South India That Are A Must Visit In 2020 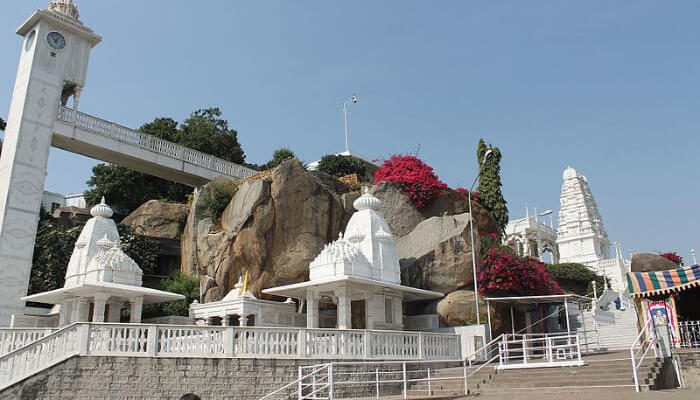 One of the most significant temples in Telangana, this place of worship is flocked by devotees all around the year. Carved extensively with white marble, the temple has a legacy of its own. The temple occupies a total area of 13 acres of land and is named after Birla Foundation.

While divinity resides inside the temple premises, the road through the hillock is filled with small shops that sell various goods like bangles, bags and street food. If you are on a trip to Telangana then a visit to the temple is a must. The presiding deity is “Lord Venkateshwara” and also, while inside one can view the Hussain Sagar lake in its full glory.

Suggested Read: 12 Places To Visit Near Kabini You Must Consider To Make The Most Of Your Trip To South India 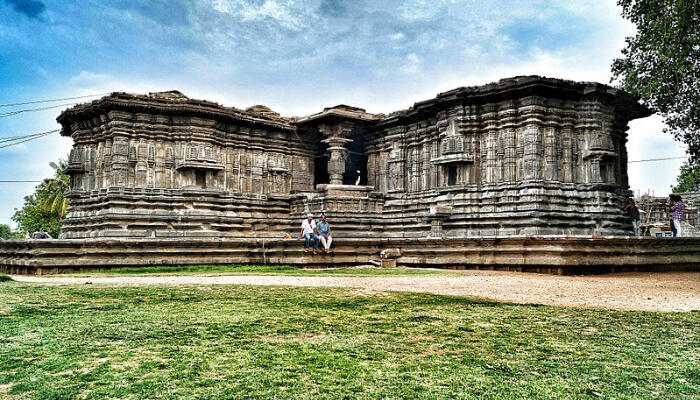 It is yet another architectural marvel which is also a clear example of Kakatiya craftsmanship. As the name suggests, the temple has a thousand pillars that make it different from the other temples in Telangana.

Intricately crafted each pillar is adorned with motifs, perforated screens, and other scriptures that evoke the charm of a bygone era. One of the significant historical sites in the city of Warangal, this gem of a place is also listed under the UNESCO heritage sites and should not be missed at any cost.

Suggested Read: 6 Places To Visit Near Salem For That Perfect Vacation To South India! 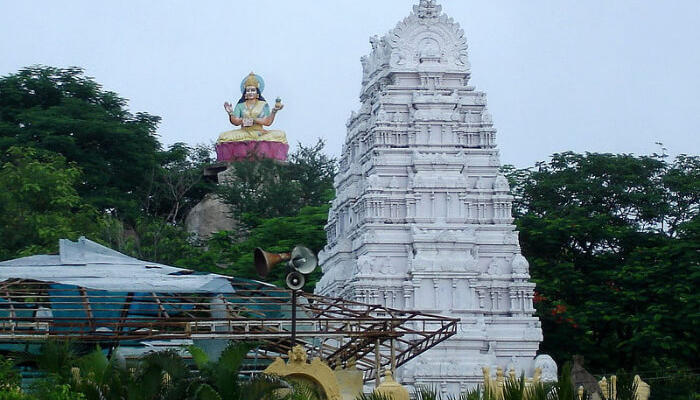 This temple in Basar has gained a reputation of being the second most popular temple of Goddess Saraswati, and one of the most beautiful temples in Telangana. The religious significance of the temple has earned a lot of footfalls from the devotees.

The place of worship represents the holy trinity in the form of Goddess Saraswati, Lakshmi, and Kali. As Goddess Saraswati is also known as the “Goddess of Learning” according to Hindu Mythology, small children are brought to this place for “Akshara Abhyasam” initiating their first collaboration with writing.

Suggested Read: 5 Scintillating Places To Visit In South India For An Exciting Vacay In 2020 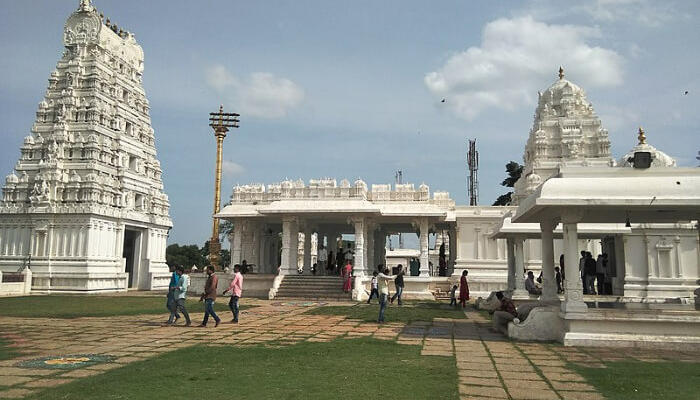 Perched atop a hill called ‘Paramanand Giri’ some 30 km away from Hyderabad, Sanghi Temple is one of the most famous temples in Telangana. The amazing architecture of the temple is a sight to behold. Located amidst scenic surroundings, the presiding deity here is Lord Venkateswara.

The idol of the Lord here is said to be a replica of the one situated in Tirumala Hills earning the temple a religious significance. The place of worship is frequented by devotees all around the year who enjoy the scenery around along with offering prayers at the temple.

Suggested Read: 7 Offbeat Places In South India 2020 That Will Make You Go ‘WOW’ With Natural Beauty! 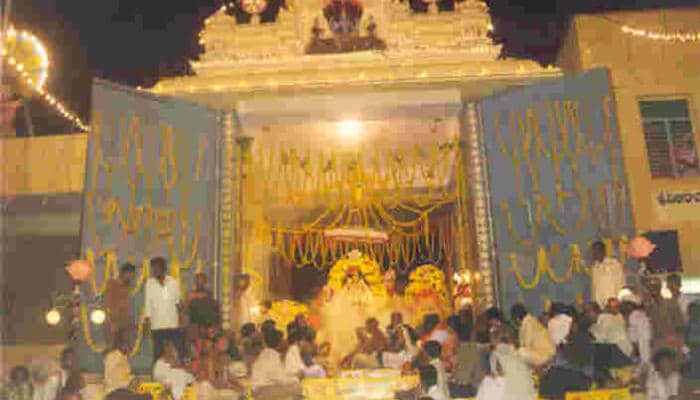 One of the ancient temples in Telangana, the place of worship is located on the banks of Godavari. All devotees who come to worship here are sure to get spellbound by the grandeur of the temple. The presiding deity here is Lord Rama Chandra Murthy or Lord Shri Ram.

While the idol inside the temple is said to be manifested on its own or as the locals say “Swayambhu”, the shrine sees major footfalls of believers all throughout the year. Considered as one of the important pilgrimage sites of the state, the temple is often referred to as “Dakshina Ayodhya”. 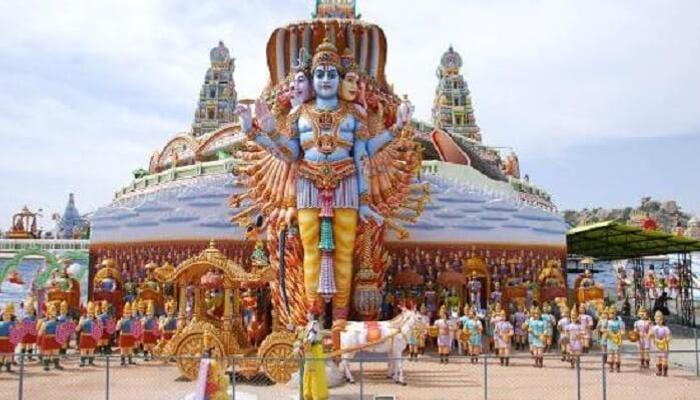 This is one of the less known temples which offers a mythological theme park to admire. Offering a space to witness the culture, art and the beautiful sculptures, this temple is one of the famous temples in Telangana. Apart from its significance, this place is also known for 101 feet Shiva Linga which is called the Nagakoti and also temples of Lord Hanuman and Lord Venkateshwara.

Suggested Read: 15 Fascinating Tourist Places In Telangana That Are Worth A Visit In 2020 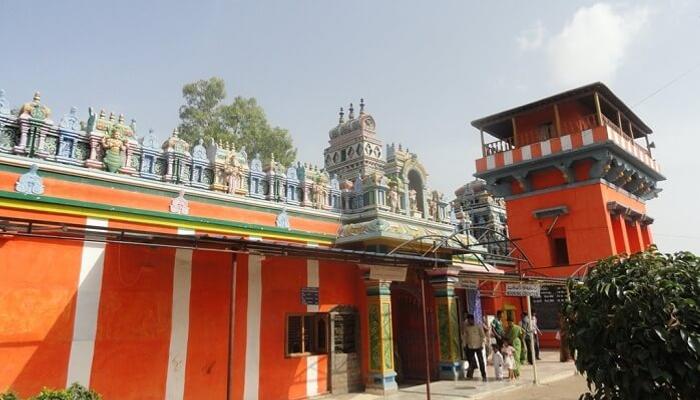 This is one of the oldest temples in Telangana which came into existence during the 11th century A.D according to the local legends. The Karmanghat temple believes and follows the similar Vedic rules of worship as other temples in the region. This temple is particularly famous for curing life-threatening diseases and also boasts a spectacular architecture.

Suggested Read: Winter In Telangana: A Handy Guide To Spend A Travel Spree Time At This Newbie State! 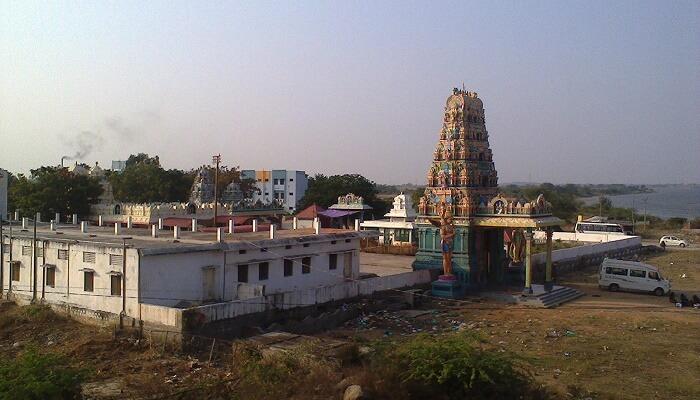 This temple is known to have been surviving since the past 200 years and is often called the home of Anjaneya Swamy or Lord Hanuman. This temple is situated by the banks of the river Krishna in Mahbubnagar district and also known for having a Shiva Linga in it. The best time to visit here is during the monsoon season during which the river water touches the edge of the temple and make it a splendid sight to view.

Suggested Read: 6 Amazing Resorts In Telangana That Offer Some Of The Best 2020 Abodes! 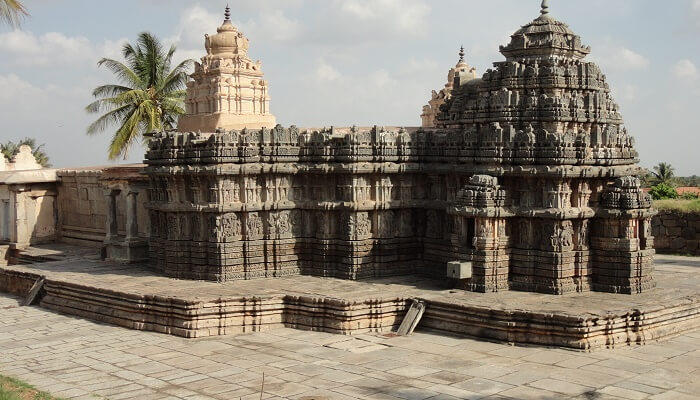 This temple is famous for being the abode of the Lord Narasimha who was the embodiment of Lord Vishnu. The place is very popular with the devotees who come from all sides of the world to perform the traditional rituals. This temple is situated inside the cave which is located at the Yadadri Bhuvanagiri district. Inside the temple there are many chambers and it makes a great deal to take a tour of the sculptures inside.

Suggested Read: 11 Restaurants In Telangana That Will Make You Lick Your Fingers On Your 2020 Trip! 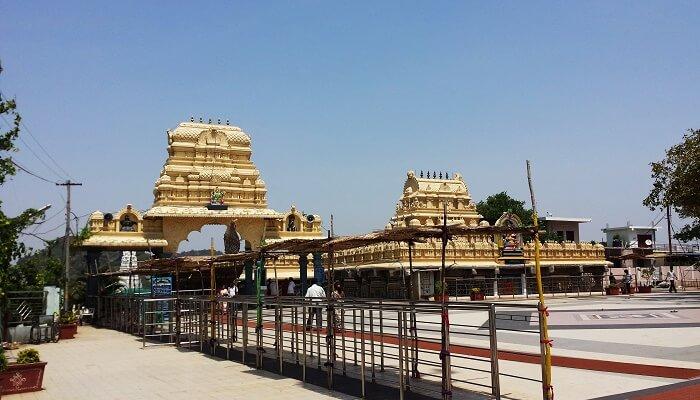 This temple holds a rich history and is known to be founded by the rulers of the Chalukya Dynasty somewhere around 625 A.D. Inside the temple there is a beautiful stone statue of Goddess Bhadrakali which is an architectural beauty. According to the legends, this temple was attacked and looted by Allauding Khilji and was rebuilt in the year 1950.

Suggested Read: 11 National Parks In Telangana That Houses Some Of The Most Exotic Species! 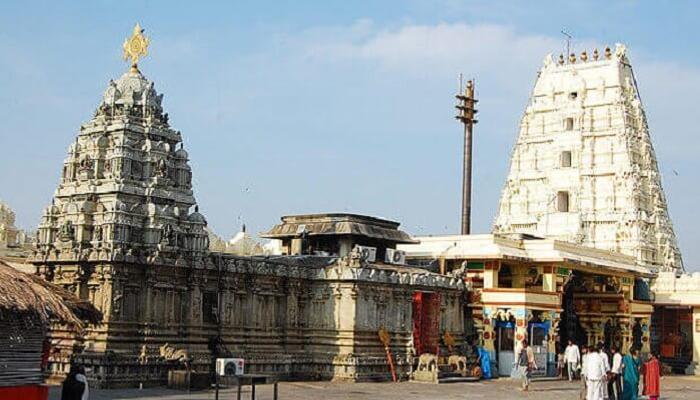 Situated at the banks of the Godavari river, this temple is located at the village Bhadrachalam. This temple was built during the 17th century and also considered to be quite famous in the region. Bhadrachalam was one of the principal deities of Lord Rama or the Vaikuntha Rama which is not present anywhere in India. 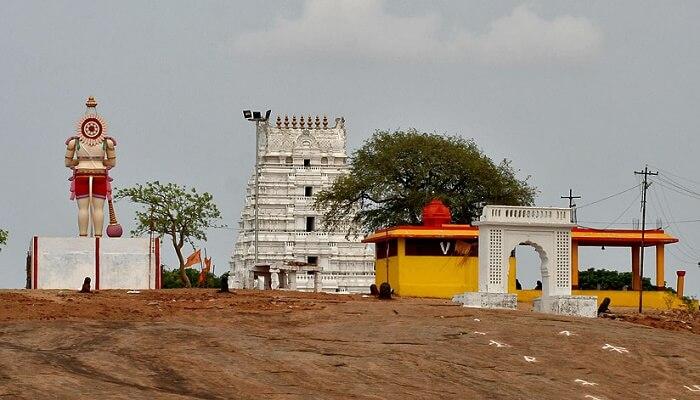 This temple is devoted to Lord Shiva and known for attracting thousands of devotees from every corner on the festive night of Shivratri. Situated at a distance of 30 kms from Hyderabad in Medchal-Malkajgiri district, this temple is known for being placed at the small knoll. Alongside that there is also a rich heritage attached to this temple. In recent times, the idols of Lord Shiva were dug from the temple steps and said to be from the 4th and 5th century.

Suggested Read: 10 Intriguing Museums In Telangana That Offers An Insight Into The Culture Of South!

See also  8 Best Villas In Nashik To Book For A Perfect Holiday! 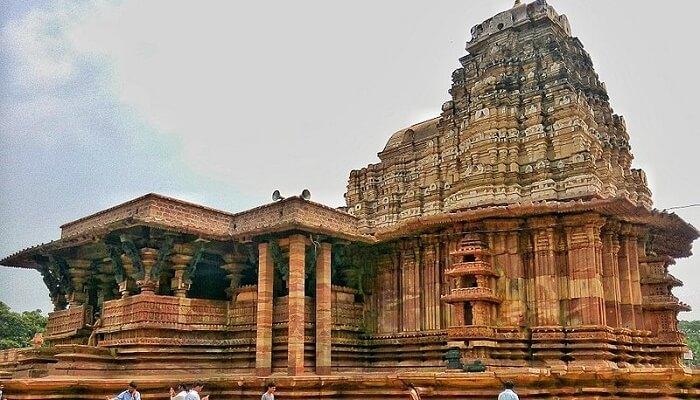 This magnificent temple is located at the surreal valley of the Palampet village which is situated at a distance of 157 kms from Hyderabad. This temple is named after its creator which is not very common to be seen in India. The deity inside worshipped is another form of Lord Shiva which is visited by many devotees throughout the year. The structure of the temple is made in a shape of a star and the pillars boast a splendid carving.

Further Read: 7 Breathtakingly Beautiful Mahabalipuram Temples That Are The Soul Of South India!

Apart from the temples mentioned above, there are many other renowned temples also as Ramappa temple, Keesaragutta temple, Karmanghat Hanuman temple, Surendrapuri temple, and Kondagattu temple, etc. which form an epicenter of tourist attractions in the state. Telangana is the land of temples and it is safe to say that any worshippers or visitors will not be disappointed by the splendor of religious places present in the state. The temples in Telangana have since time immemorial created a special niche across the globe, thereby contemplating everyone to plan their next trip to Andhra Pradesh.

Q. What is the best time to visit Telangana?

A. The best time to visit Telangana is in the winter months mostly between September to March. Summers can be really problematic as there is a scorching sun always chasing you in summers.

A. Telangana offers some really good hotels. There are two types of hotels, namely, star hotels and heritage category hotels that serve good food and satisfy the demands of a tourist properly.

Q. How to reach Telangana?

A. One can reach the place through all modes of transport like railways, roadways, and airways.

Q. What is Telangana known for?

A. Telangana is known for its hospitality, diversity and pluralistic society. It is multicultural, making it one of the best places to live in India.

Q. When was the place originated?

A. The place has its origins 5000 years ago and is a representative of the Deccan Plateau and its cultural heritage from times that trace back to years and years.

Q. How wealthy is Telangana?

Q. Which temple is founded by the Birla trust?

A. The Birla temple situated in Hyderabad is founded by the Birla trust.