The critically acclaimed animated series Invinciblecreated by Robert Kirkman, Cory Walker, and Ryan Ottley, revolves around teenager Mark Grayson as he becomes the superhero, Invincible. Mark’s father happens to be the world’s greatest hero Omni-Man. The comic book was so popular it led to an Amazon Prime series. The Invincible series was a massive hit for the streaming service and became one of the most talked about new shows. Of course, that means hilarious Invincible memes started popping up all over social media.

These funny Invincible memes are good for a laugh and are the best way to start the day. The memes poke fun at the show, characters, and storylines. Plus, several of the memes crossover with other popular shows connected to the series. 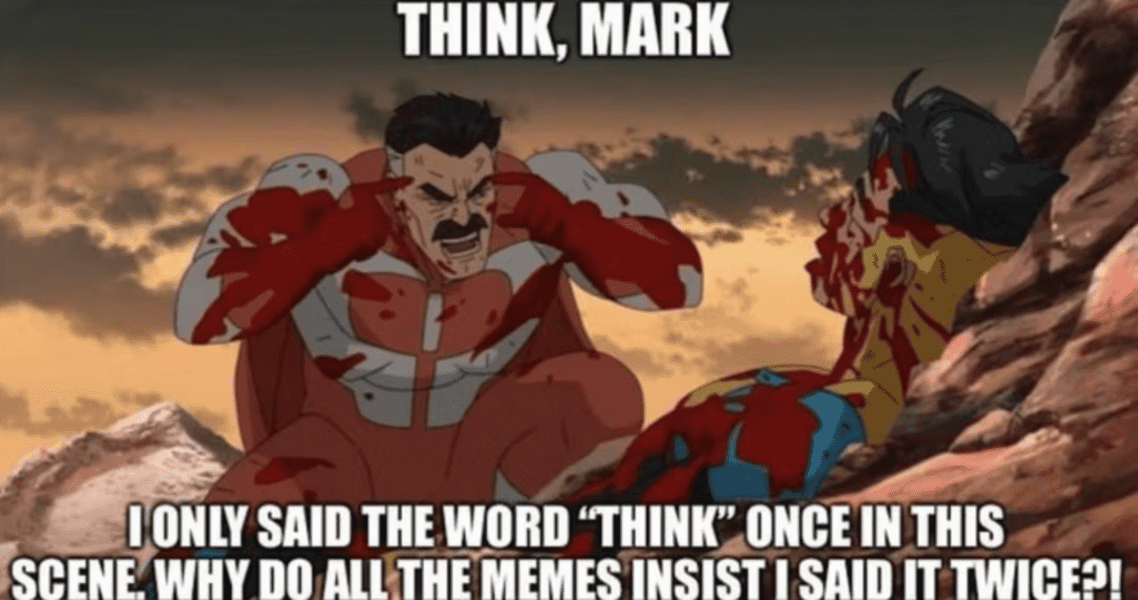 In the final episode of season one, Mark discovers that his father Omni-Man is actually the villain. Omni-Man precedes to give his son an epic beating ending on a mountain. He then goes on a long parental rant and screams, “Think Mark.” 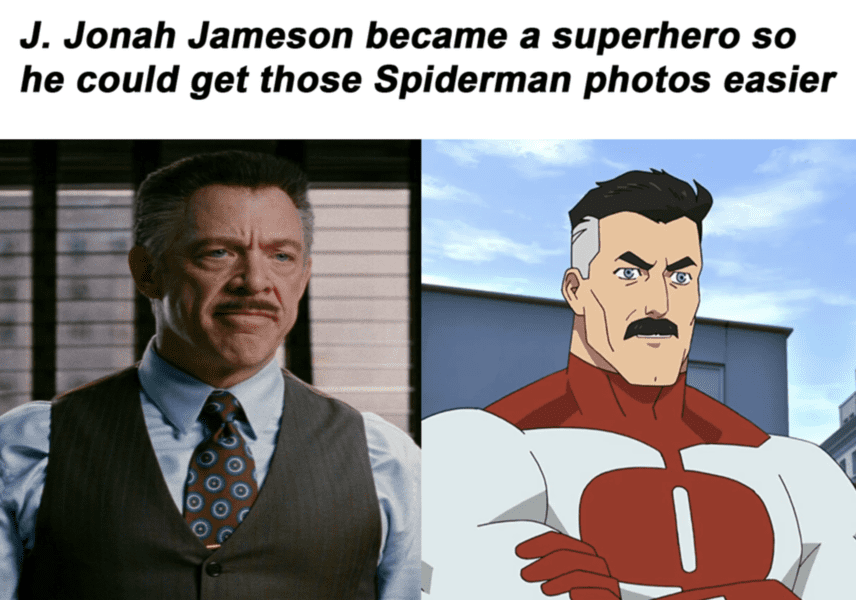 This funny meme points out that Jameson went from hating superheroes to becoming a comic book superhero. At least he’ll be able to get some close-up shots of Spidy.

3. Got To Go Through the Train 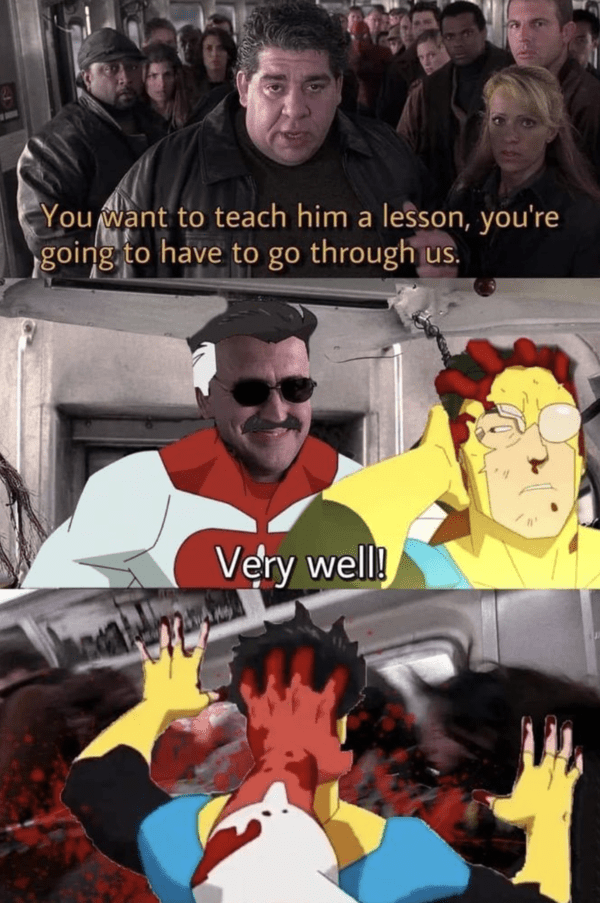 In a memorable scene, Omni-Man and Invincible have a bloody and violent brawl around the world. Honestly, it’s a pretty one-sided fight with Omni-Man beating his son half to death. In a shocking moment, Omni-Man uses Invincible to kill a train full of people.

This meme jokes about the similarity with a scene from Spider-Man 2. In that scene, a train full of people stands up to Doc Ock as he beats down Spider-Man. This meme inserts J. Johan Jameson’s character into the meme. Unlike Doc Ock, he goes through everyone on the train. 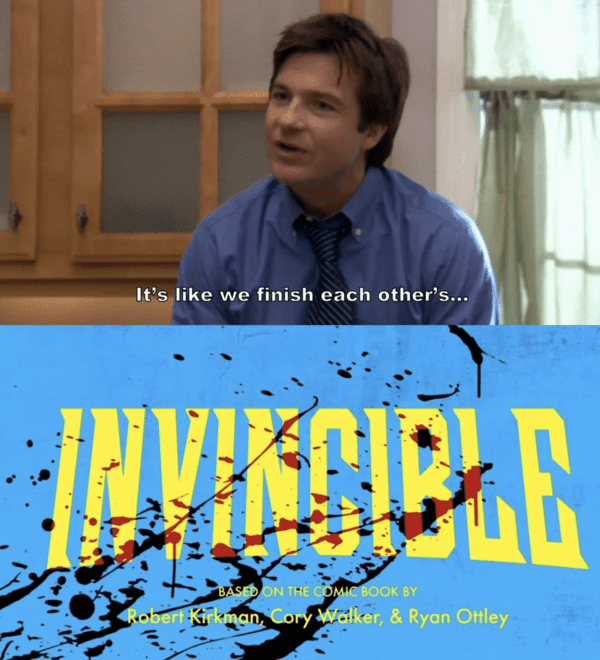 At times, Invincible, created by Robert Kirtman, Cory Walker, and Ryan Ottley, is a typical superhero series with dark and complex storylines. However, it always retains its hilarious sense of humor. In a funny running gag, the title card suddenly pops up when someone says, “Invincible.” This funny meme pokes fun at the show’s title card by popping up in a scene from the classic series Arrested Development. 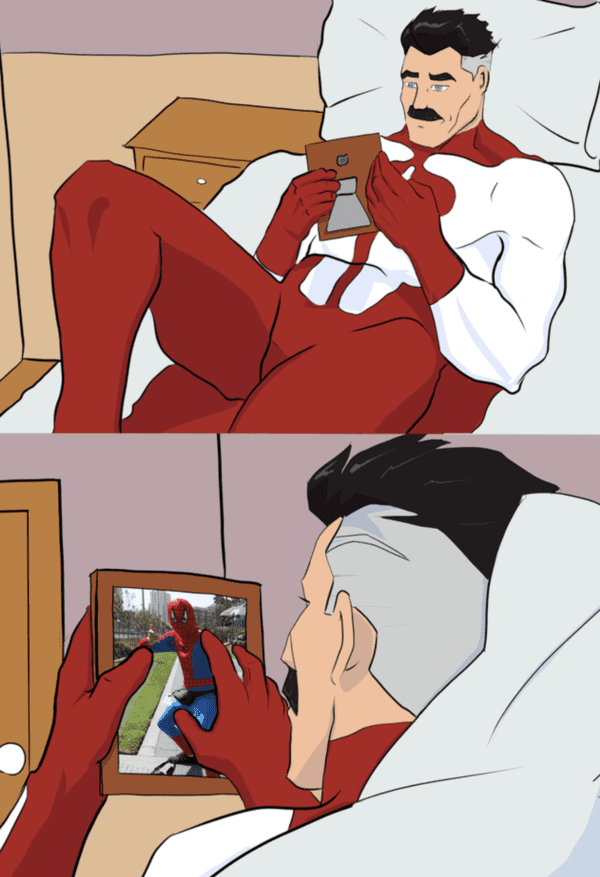 Invincible fans love the J K Simmons connection with the Spider-Man franchise. However, this meme connects with Spider-Man and comic book superhero Wolverine. In a popular meme, Wolverine lays back and admires a picture with different images. This meme replaces Wolverine with Omni-Man as he lovingly admires a picture of Spider-Man. It turns out J Jonah Jameson finally got that Spidy pic. 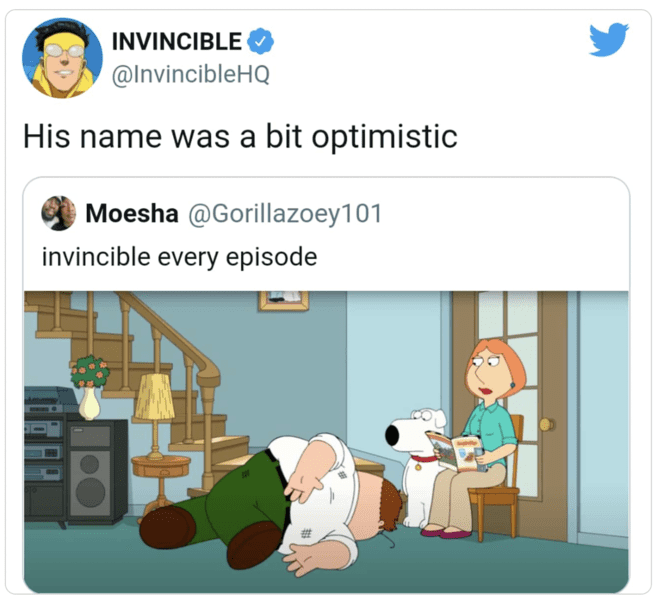 Mark Grayson, voiced by Steven Yeun, is determined to follow in his father’s footsteps and live up to Omni-Man’s reputation. However, Mark’s journey is brutal and violent. Indeed, he gets the stuffing beat out of him every episode. This meme ties in with a funny scene from Family Guy where Peter falls down the stairs. Much like Peter, Mark’s a bloody mess in the entire series.

7. Darkwing Will Be Back Any Second 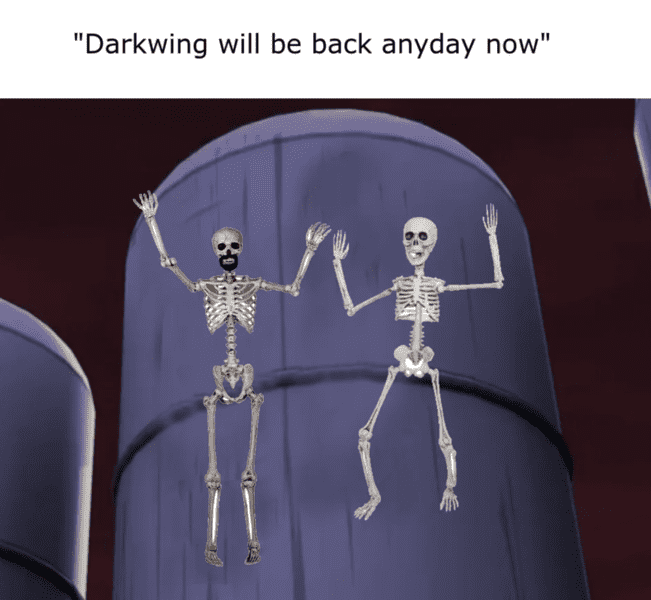 Darkwing and Batman have a lot in common. Like Batman, Darkwing leaves two criminals tied to a water tank in the pilot and promises to return for answers. Of course, Darkwing’s death at the hands of Omni-Man makes that impossible. This meme jokes that the two criminals are still hanging around for Darkwing to return. They’ve been there so long they’re now skeletons, but they won’t give up hope. 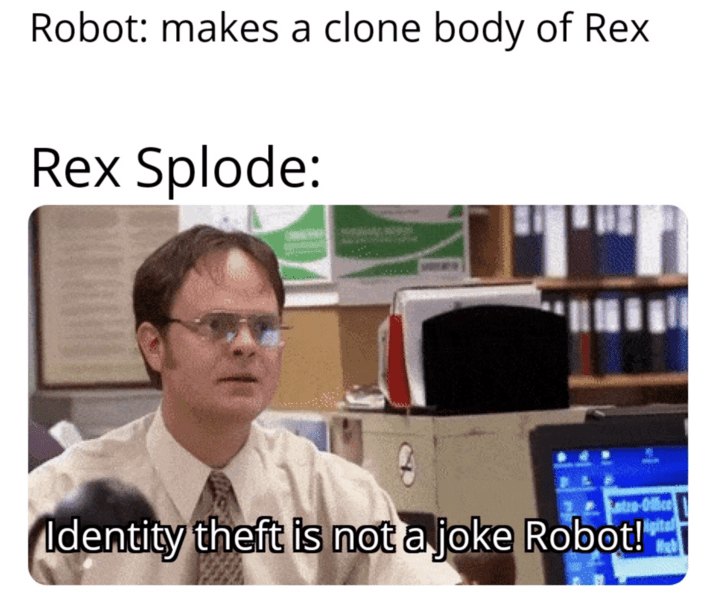 During season 1, Rex Splode discovers that Robot created a clone version of him. Rex is furious and rants about the clone version stealing his identity. A similar scene appears in the beloved television sitcom The Office. Dwight warns Jim that identity theft isn’t a joke. This meme points out that similarity but replaces Jim’s name with Robots. 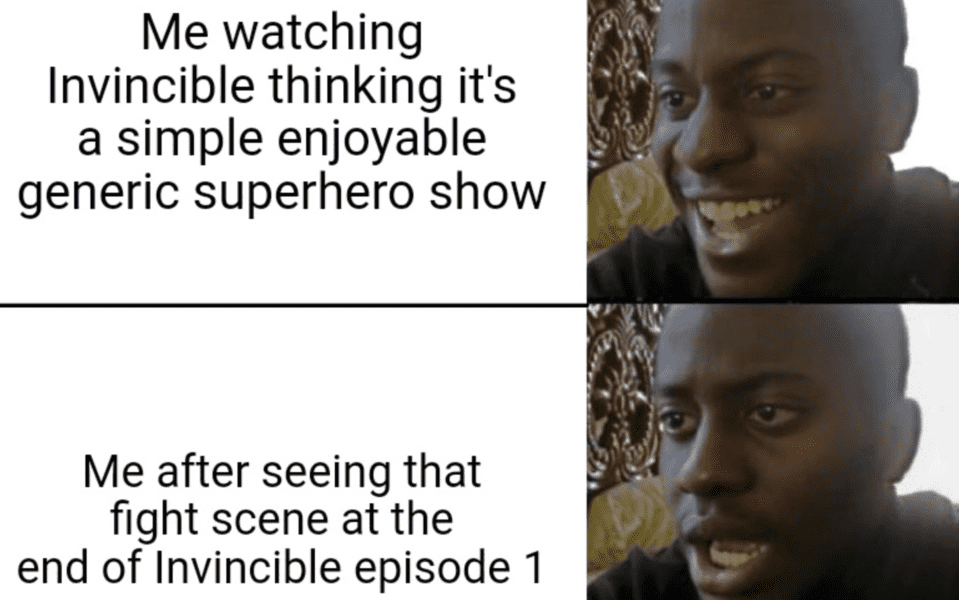 This meme perfectly sums up the fan reaction to the first episode of Invincible. The pilot is a typical origin story about Mark discovering his powers and becoming a superhero. Honestly, it’s a pretty lighthearted episode until the end.

The shocking twist ending features Mark’s father, Omni-Man, violently killing the Guardians of the Globe. As the meme points out, the ending certainly caught audiences off guard.

10. Relationships Are Tough for Superheros 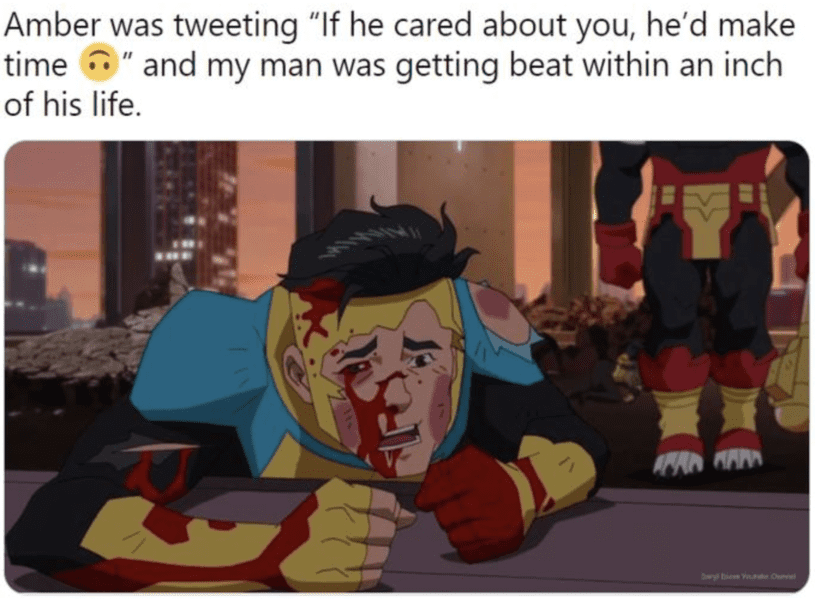 Relationships can be challenging for anyone, including superheroes. Amber was often frustrated with Mark disappearing during dates to be a superhero. This meme jokes about Amber’s lack of support and attitude towards Mark saving the world.

In the meme, Mark is beaten half to death by a cat from outer space, Battle Beast. At the same time, Amber tweets that a good boyfriend makes time if he cares. Of course, the space cat won’t defeat itself.