The shop also offers a wide variety of other tattoo services, including custom designs, cover-ups, and removal. The Office Tattoo is a trusted source for quality tattoos and tattoo removal. The shop is also a member of the Better Business Bureau. The Office Tattoo is a safe and reputable tattoo studio that offers a wide range of services to its clients. 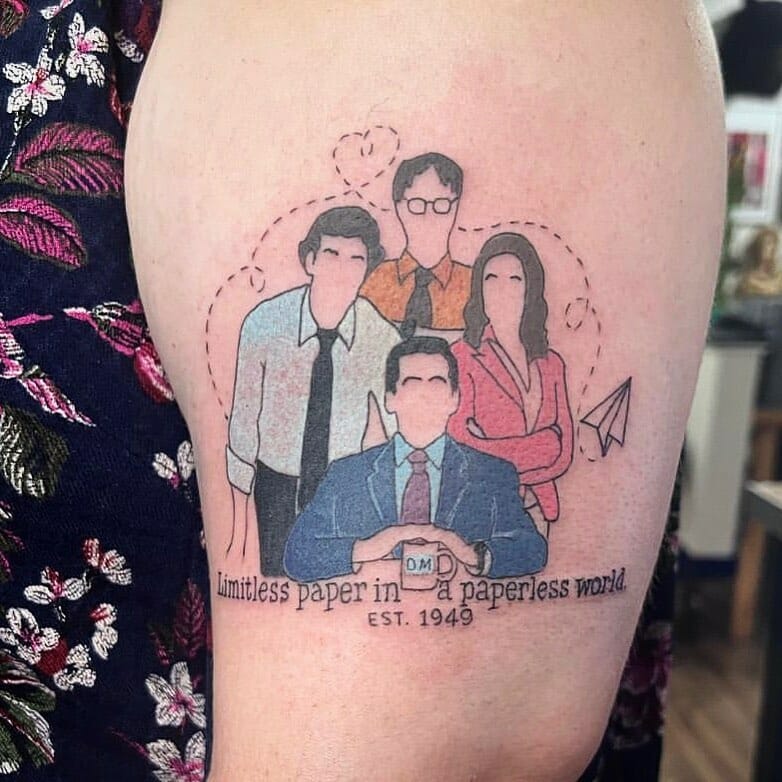 @1867_tattoo_company via Instagram‘The Office’ is a mockumentary television series with impeccable humor which keeps you hooked.

‘The Office’ has nine seasons that depict the everyday lives of Jim Halpert, Pam Beesly, Michael Scott, Angela Martin, Dwight Schrute, Andy Bernard, and others. It first aired on the NBC channel on March 24, 2005.

The Office is based on the everyday lives of the above characters with a few more additional characters working in Dunder Mifflin Paper Company in Scranton, Pennsylvania. The series was set up with the help of a single camera setup. It has a total of 201 episodes. The Office was not much appreciated after its brief release of six episodes in the first season. But later, it was appreciated by the viewers and people are still hooked on it. It gives us some emotional moments, some moments worth cringing for, (remember Scott’s Tots?), it also gave some amazing taglines which we still use in real life.

The beautiful moments of the blooming love story of Jim and Pam, the funny moments of Jim’s pranks on Dwight, and of course, the main attraction, Steve Carell’s depiction as Michael Scott. It broke the hearts of the fans when Michael left the show. However, seasons 8 and 9 are equally funny and made an effect on the hearts of the fans. To this date, tattoo aficionados love getting tattoos inspired by this milestone series. It shows how much they miss the series and love it to their core.

Office tattoos are very common and you can get them done in any tattoo parlor. One of the famous tattoo parlors is Dunder Mifflin tattoo studio which has expertise in this arena of making tattoos related to The Office. Pay homage to your favorite characters and moments from The Office and fall in love with it all over again! 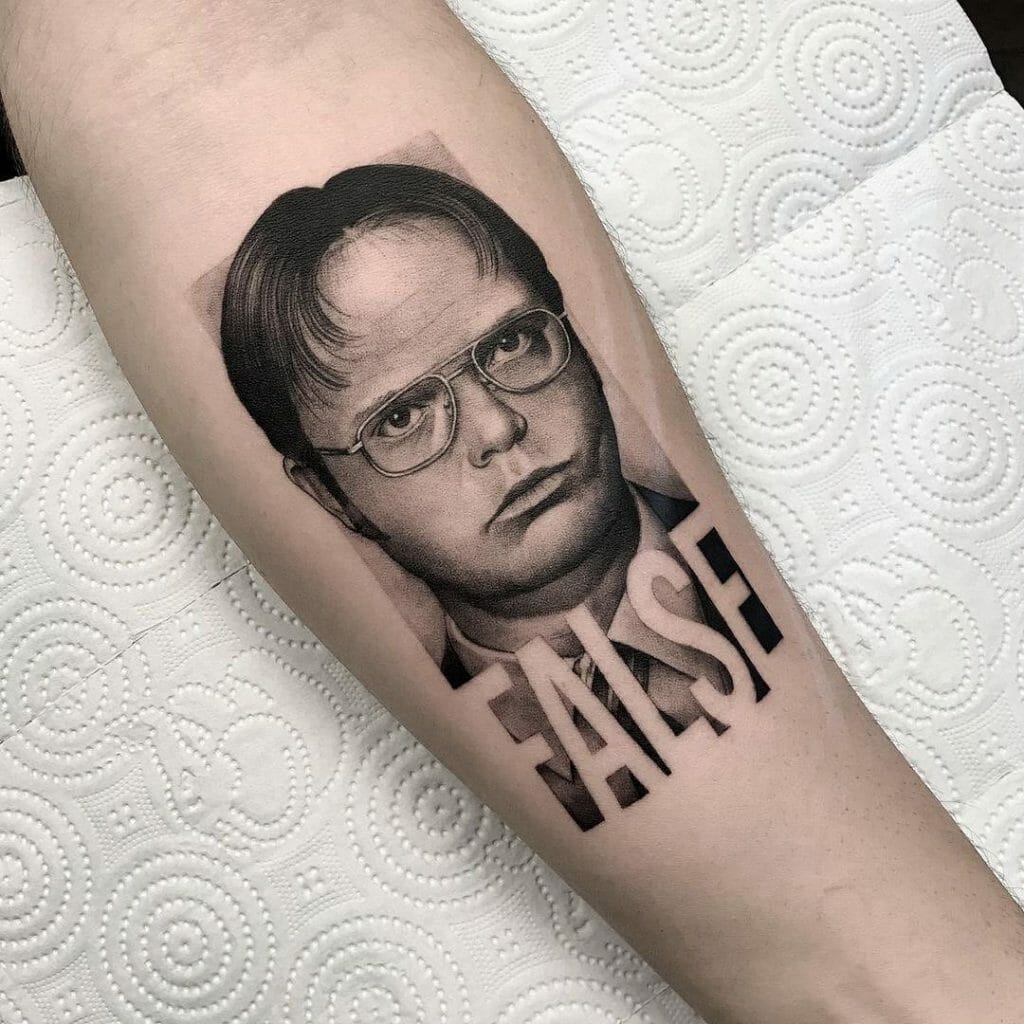 @inker_land via InstagramDwight Schrute is a lovable character in The Office and people have adored him. Rain Wilson has made the portrayal very real and it set a landmark in future generations of sitcoms. This tattoo is of Dwight Schrute, exclaiming false statements and making his comment. To him, his opinion is optimal and he seems to have gained real-life experiences.

The tattoo depicted the image of Dwight very distinctively and it is accurate. The tattoo is just made with simple black ink, however, it looks amazing. The false writing is done with gaps in the skin which makes its distinctive mark. The grunge effect of the shades of Dwight Schrute looks incredibly beautiful and makes it stand out in the crowd. If you adore Dwight Schrute, you can take this as inspiration for your next tattoo. 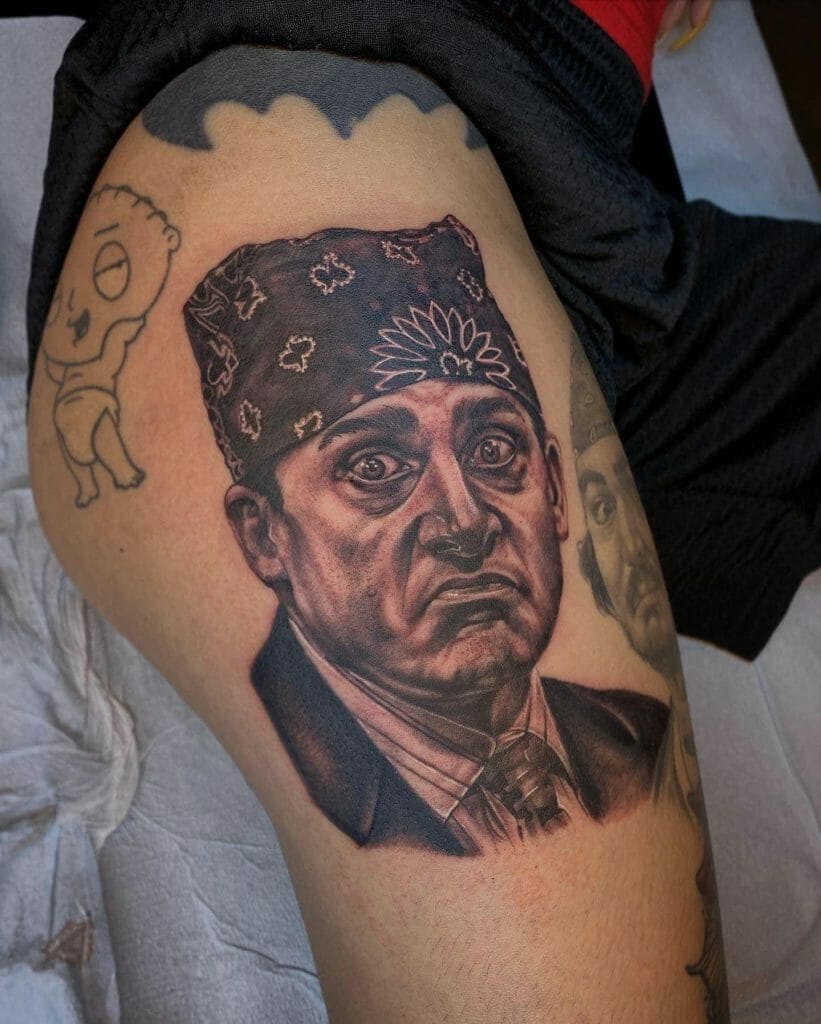 @sabrinaswayerstattoo via InstagramDo you recollect the iconic line from The Office: “The worst part of the prison was the dementors!” Well, this tattoo is to commemorate that memory distinctively. This is the tattoo of Prison Mike. Michael Scott is arguably one of the funniest characters on The Office. Fans have often exclaimed that he carried the show on his shoulders for years.

This tattoo refers to the episode where a former felon is given a chance to work in Dunder Mifflin Paper Company. The employees show concern regarding the fact. As usual, Michael tries to make it an issue of himself and draws the attention of the squad towards him by depicting, “Prison Mike.” This tattoo is the face of Prison Mike. The tattoo looks straight out of the clip of the episode. The shades made on the face look gorgeous and the tattoo looks realistic. If you like small tattoos on your body that enhance your fandom and love for American sitcoms, this is a fine example for you. You will love this tattoo if you are a huge fan of Prison Mike. 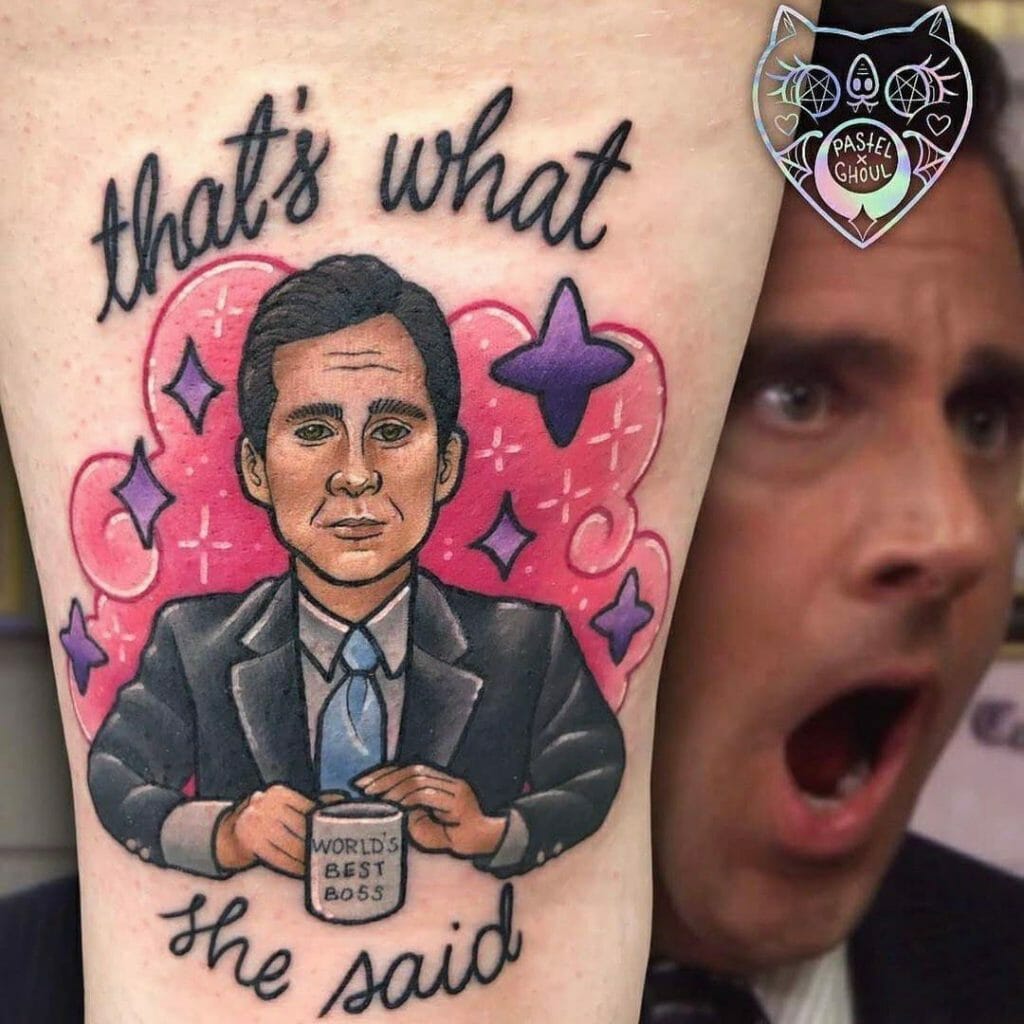 @txttoo via InstagramDo you use the catchphrase, “That’s What She Said.” more than you should? Well, this is the perfect inspiration for you to get a tattoo. Every time there is a comment with a tinge of sexual innuendo, Michael Scott has been seen using this phrase in public. Now, it is a famous phrase that is used all over the world by die-hard The Office fans.

This tattoo is of Michael’s face with the famous quote: That’s What She Said. They have made it with attention to detail and it looks really beautiful. The animated depiction of Michael Scott is amazing and looks phenomenal. This is one of the finest tattoos you can have. You can improvise the tattoo your way with your preference of color palette. Use your creativity to get your favorite tattoo! 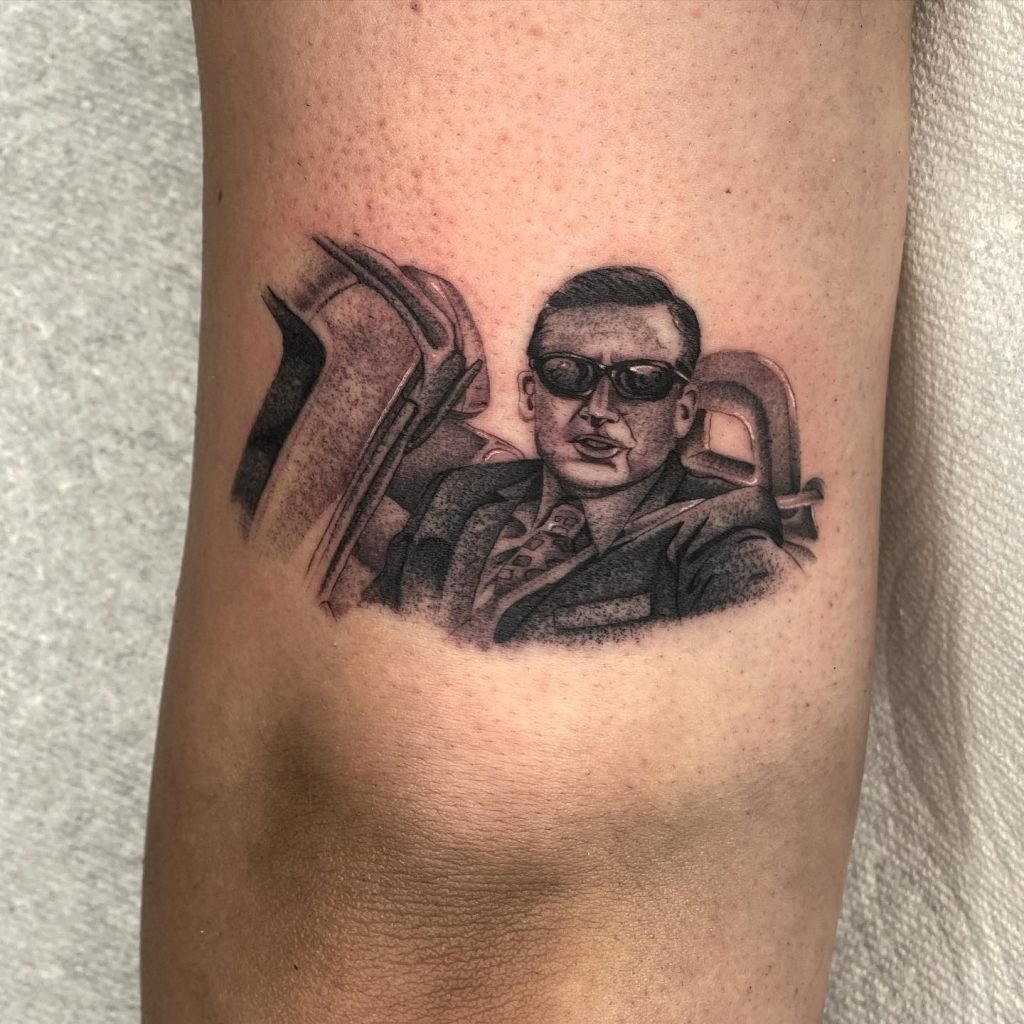 @rigotattoos via InstagramThis tattoo is also an iconic tattoo of Michael Scott. You will adore this tattoo if you are an ardent The Office lover. This tattoo is tattooed with black and grey ink. The tattoo looks stunning and it just replicates the beautiful scene from the series.

Even though it is in the black and grey color palette, it looks very gorgeous and makes one stand out in the crowd. The line is, “It’s Britney Bitch!” The line is iconic and helps you to catch up with pop culture. If you love Britney Spears or Michael Scott of course, this can be your next tattoo. You can customize it your way. You can even add the quote to make it much more meaningful for you. 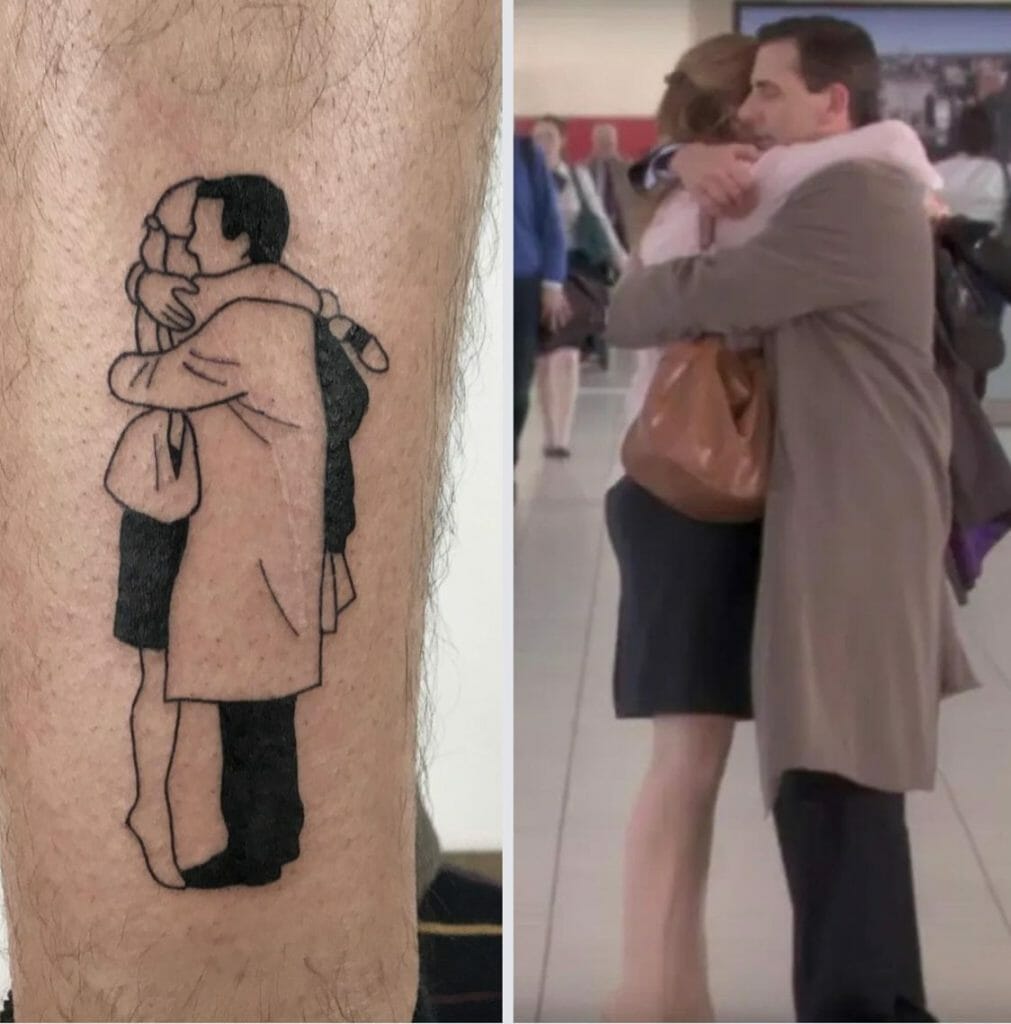 @dundermifflintattoos via InstagramRemember the episode, “Goodbye Michael?”. Do you remember how everyone bid farewell to Michael and how it affected everyone? This outline tattoo of Pam and Michael is from that episode. In this tattoo, it can be seen Pam is hugging Michael before he goes to Colorado to spend the remaining part of his life with Holly.

This is a very emotional tattoo and shows the unbreakable bond between Pam and Michael. When everyone took aback by Pam, Michael believed in her. Michael has always been by her no matter what. This tattoo is minimalistic and small, yet it symbolizes thousands of meanings that affect us to date. You can customize the scene according to your choice. You can choose a tattoo as per your preference that expresses your love for The Office and let your creativity shine! 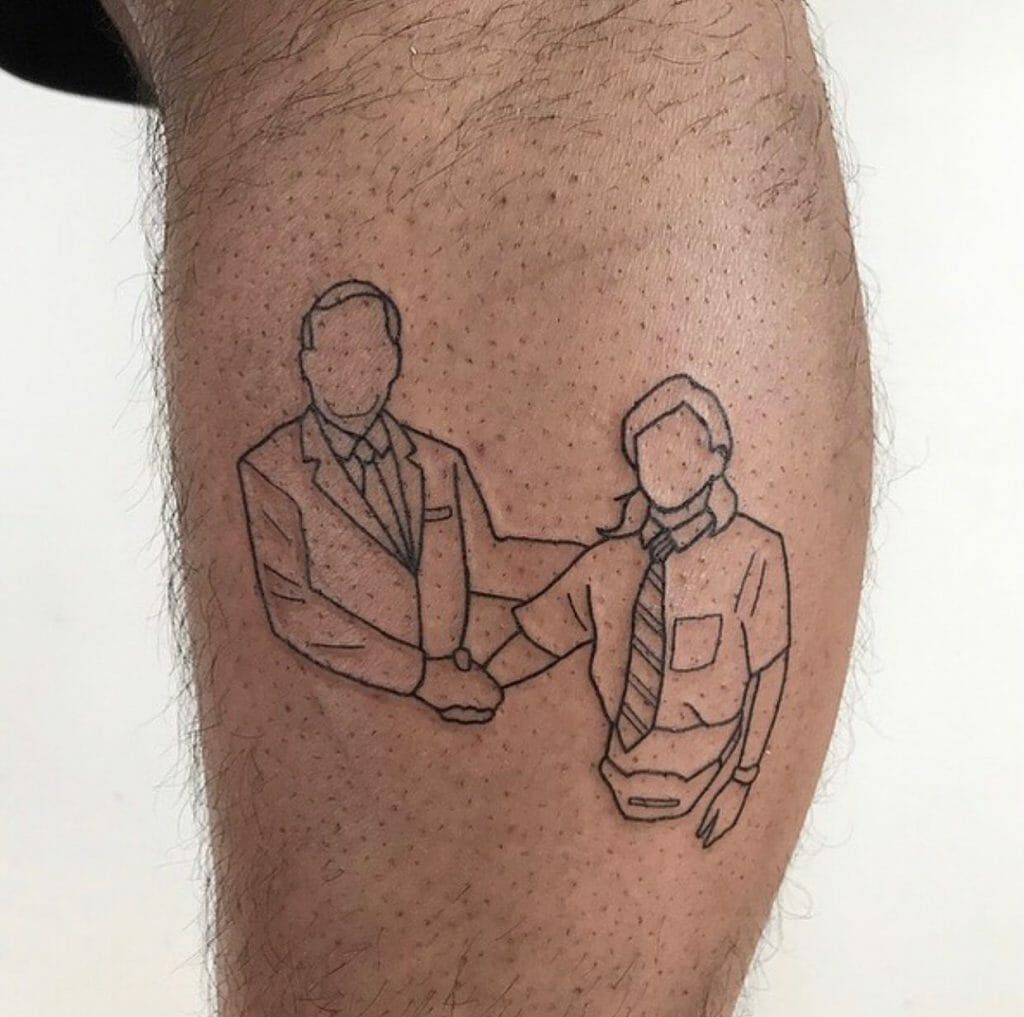 @dundermifflintattoos via InstagramEven before we became ardent fans of the show, this tattoo is from an iconic meme template that is very popular on social media. Of course, it is an outline tattoo. However, it is a very loving tattoo for every The Office lover or someone who loves pop culture references. T

his tattoo is when Michael Scott meets his mentor Ed Truck who dies from a tragic car accident. The tattoo is made with sheer brilliance and credit and looks gorgeous. It brings out the beauty of minimalistic and dainty tattoos which are very popular nowadays. This depicts that the wearer is a humorous person and loves to make people laugh. The tattoo is hilarious and you are going to love it for your next tattoo inspiration. 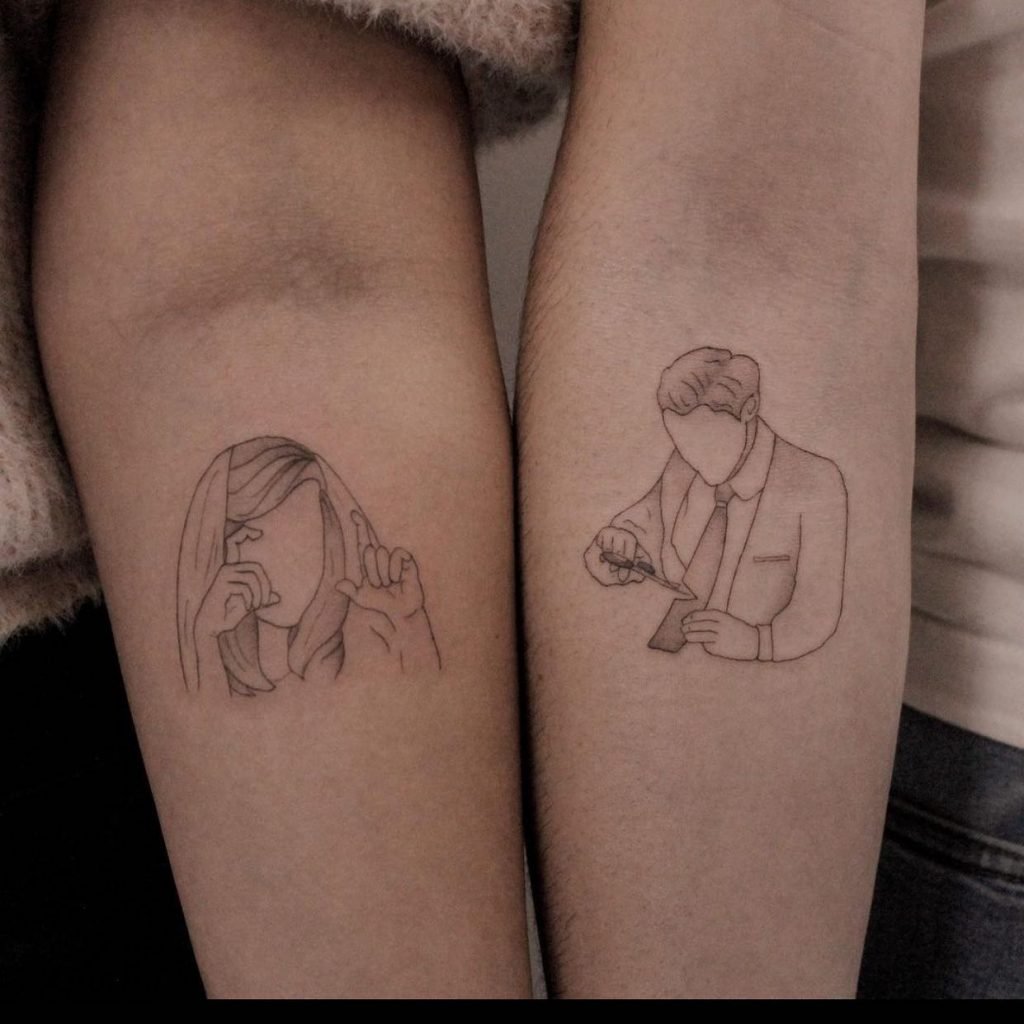 @dundermifflintattoos via InstagramWe adore Jim and Pam. They are an ideal example of couple goals and they have taken relationship goals to the next level. This particular outline tattoo is inspired by the idea of their wedding day. In this tattoo, on hand, the wearer has Pam’s outline on it.

On the other hand, Jim is cutting off his tie to match it up with Pam. It is a beautiful tattoo inspiration that makes us go in awe. It can be seen that Pam is clicking a picture with her own hands and it looks really beautiful. If you long for a tattoo that shows the purest form of love, this is a fine example for you. 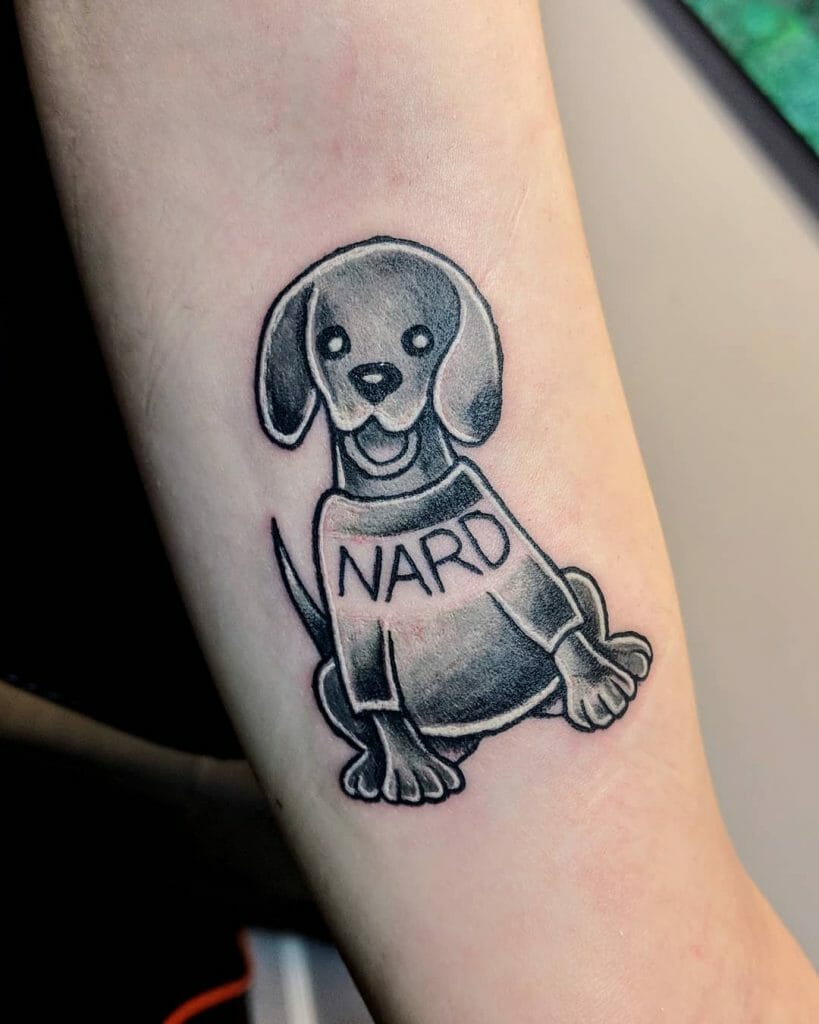 @pennylanetattoos via InstagramEven though Andy Bernard is a later edition to the Office tv show, he made his mark on the fans. This tattoo is a Nard dog tattoo that was made on his ass. This is a cute example of a butt tattoo that one is going to adore.

This tattoo is made with black ink and it still looks incredibly adorable. The tattoo is really beautiful and makes one stare at it for a long. The shades and hues of black look adorable and make you want to get this as your next tattoo inspiration. If you loved Andy and Ed Helms who portrayed the character, this can be a good tattoo inspiration for you! 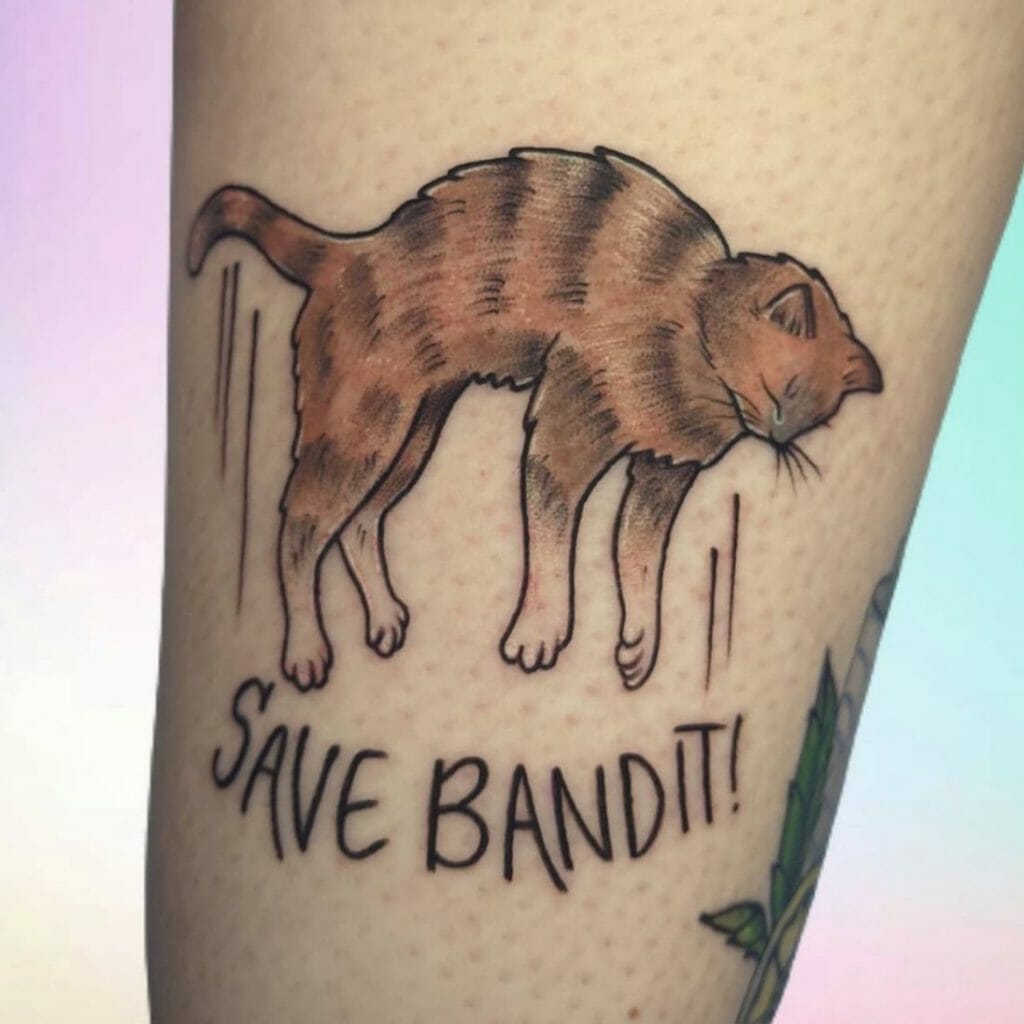 @dundermifflintattoos via InstagramDo you remember the iconic episode of Fire Drill where Dwight causes the fire? Remember how Angela threw her cat to the ceiling saying, “Save Bandit!”? Well, this tattoo is going to make you visit down the memory lane when a huge pandemonium was created in the office because of Dwight.

The tattoo looks realistic and beautiful and is an amazing inspiration for a tattoo if you are an ardent lover of that episode. The cat looks also very accurate to the real one and it is a great tattoo idea. 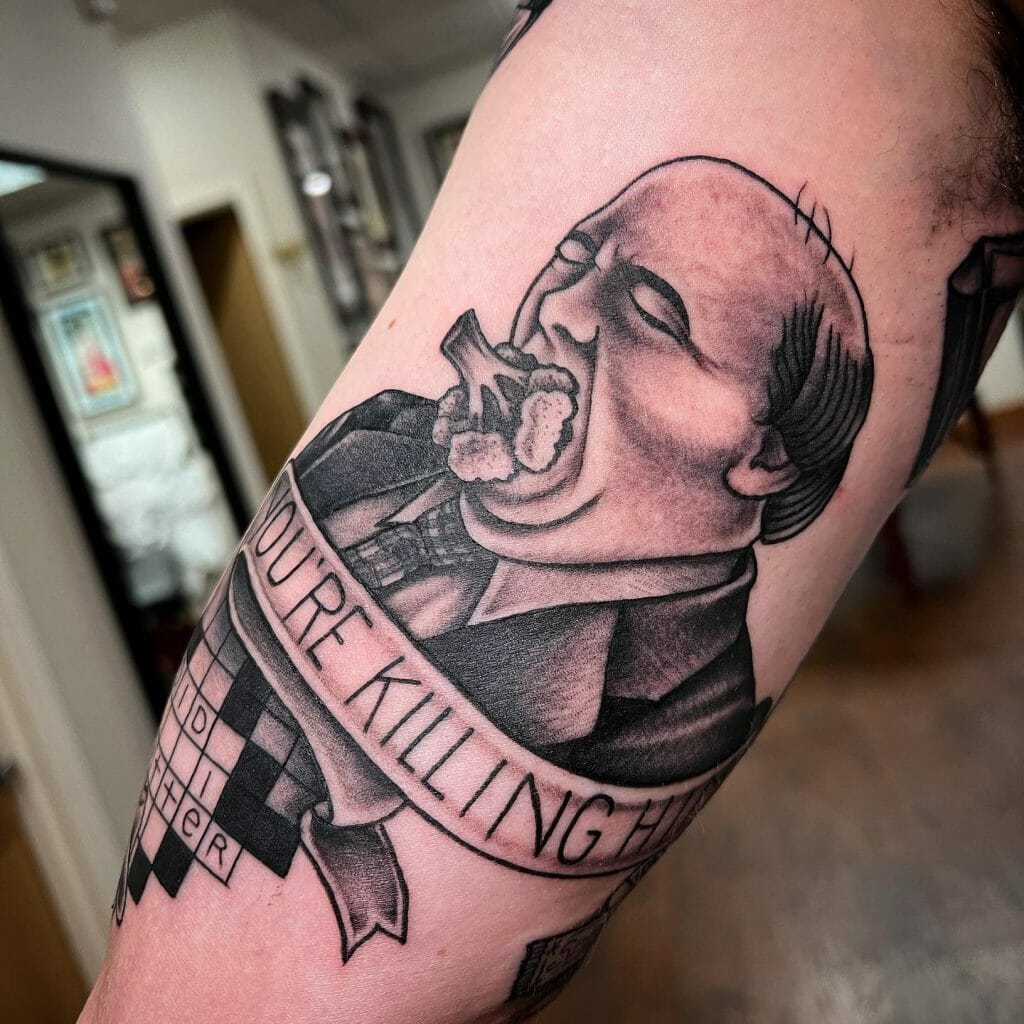 @kailahbartolome via InstagramKevin Malone is a beloved character in The Office and we adore him. This tattoo is replicating the scene of Kevin eating broccoli and how he hates it. The tattoo is simple and funny. Makes you reminiscent of the scene where Kevin had the broccoli. Kevin is a beautiful character and adds a fun element to the series.

The Office is a funny series which is loved and adored by all. Here is some amazing inspiration for your next tattoo related to the series: