Lion tattoos often have cultural or personal significance, and they can be very beautiful and eye-catching. If you’re considering a lion tattoo, be sure to research the meaning and symbolism of lion tattoos before making your final decision. Lion tattoos are permanent, so you’ll want to be sure that you’re completely comfortable with your choice before going ahead with the design. 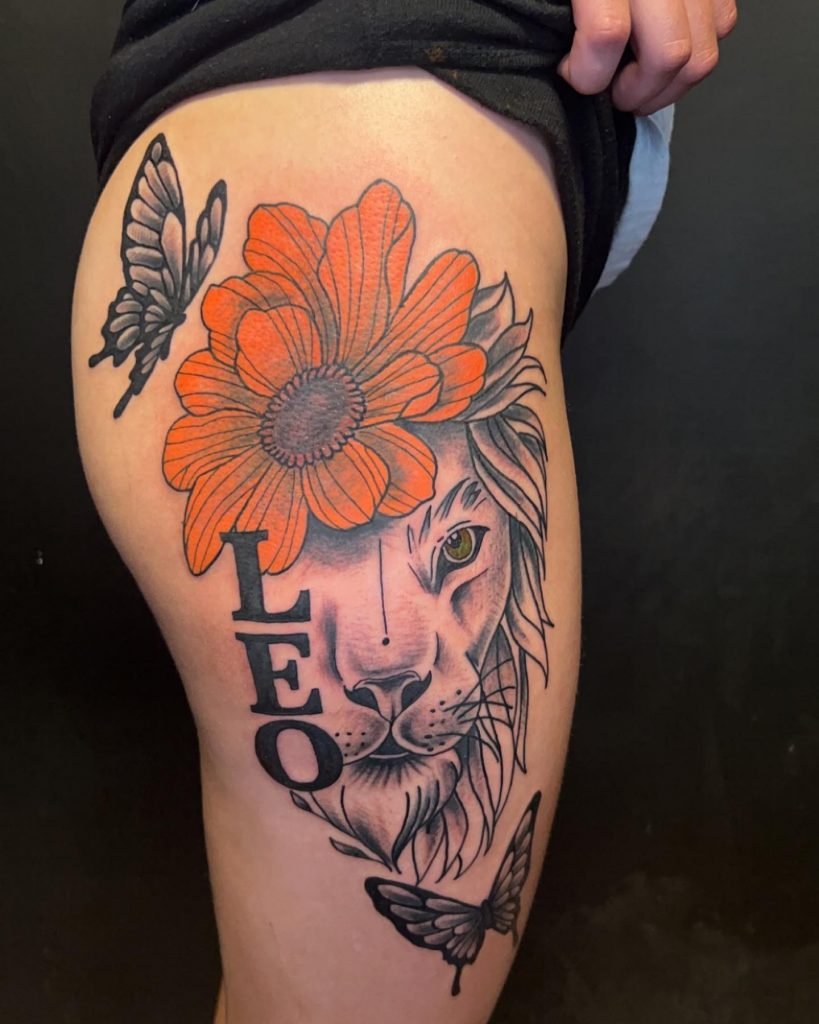 @2reckless_rome via InstagramThe word lion has been derived from the Anglo-Norman word “Liun.”

An apex predator in the food chain Lions has often been associated with royalty. They were even kept as captives from the time of the Roman Empire and became key animals in zoos since the eighteenth century.

Male lions have manes that make them look majestic and their association with royalty has given them the moniker ‘King of the beasts.’ Due to conflict with humans and habitat loss lions have been put in the vulnerable category by the IUCN Red List and are found in parts of Africa and India. From ancient times lions have been used as symbols in different cultures and later it was adopted in the tattoo world too. 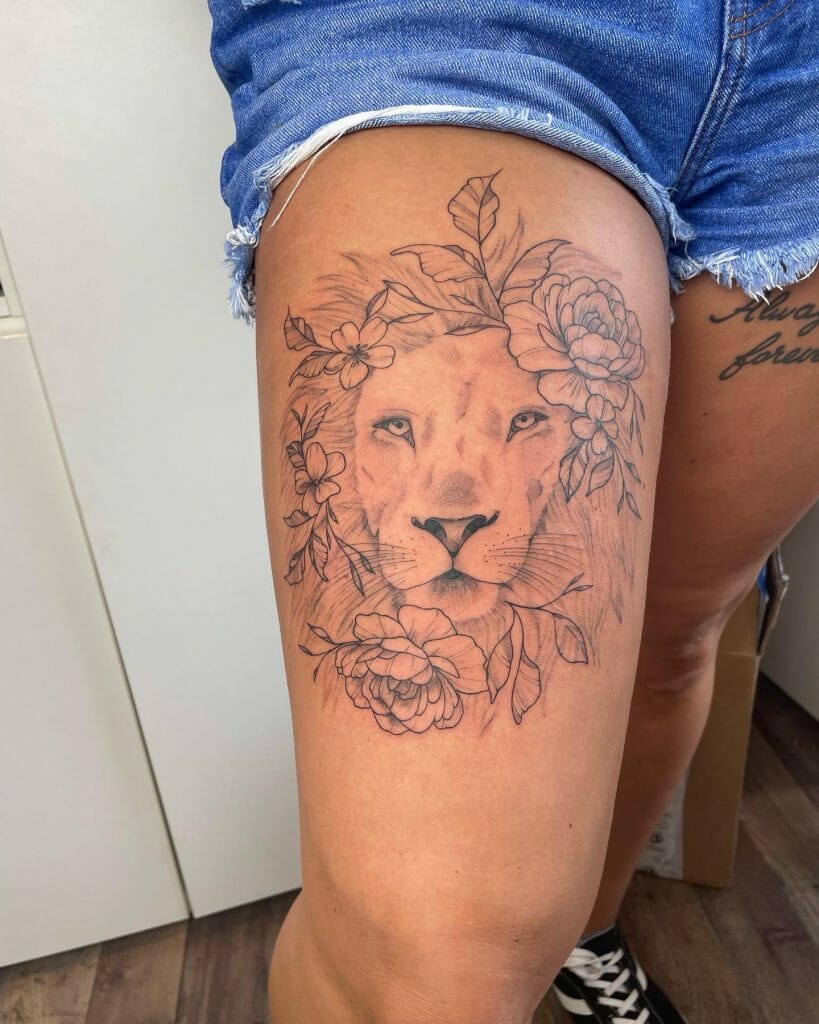 @ninastrologytattoo via InstagramA high-ranking predator in the food chain of nature – the simple lion tattoo is a trendy tattoo choice both among men and women. With a mixture of beauty and grace yet known for its ferociousness and hunting skills, a lion represents different things in different cultures. The common things that these lion tattoo ideas represent are courage, strength, guardianship, wisdom, power, and transformation.

The simple ones are mostly done using black ink and the size varies from medium to large. The simple lion tattoos can be done in a variety of designs like to show strength an angry lion is done, to show guardianship a lion family is inked, and to show wisdom a quiet lion face is drawn. Depending on the need of the tattooer the design must be chosen wisely. 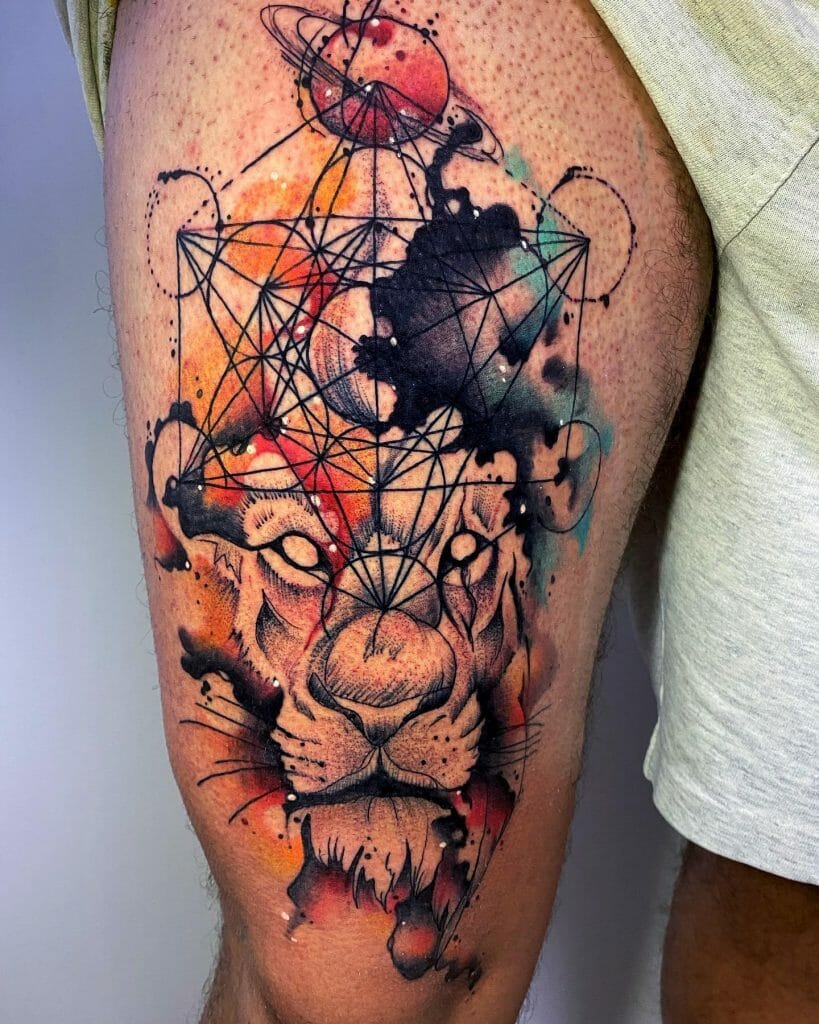 @pillulynk45 via InstagramA unique lion tattoo is a geometric lion which is both popular among men and women. Multiple vibrant colors are used to make this lion on thigh tattoo and the common thing shared by geometric elements and the lion is balance and harmony.

Now different geometrical shapes represent different characteristics, like the circle represents the endless cycle of life, the triangle represents strength which can be very much associated with a lion and the square represents Earth where the lion roams freely. Either a single design can be done or multiple design elements can be fused to extract the desired meanings. 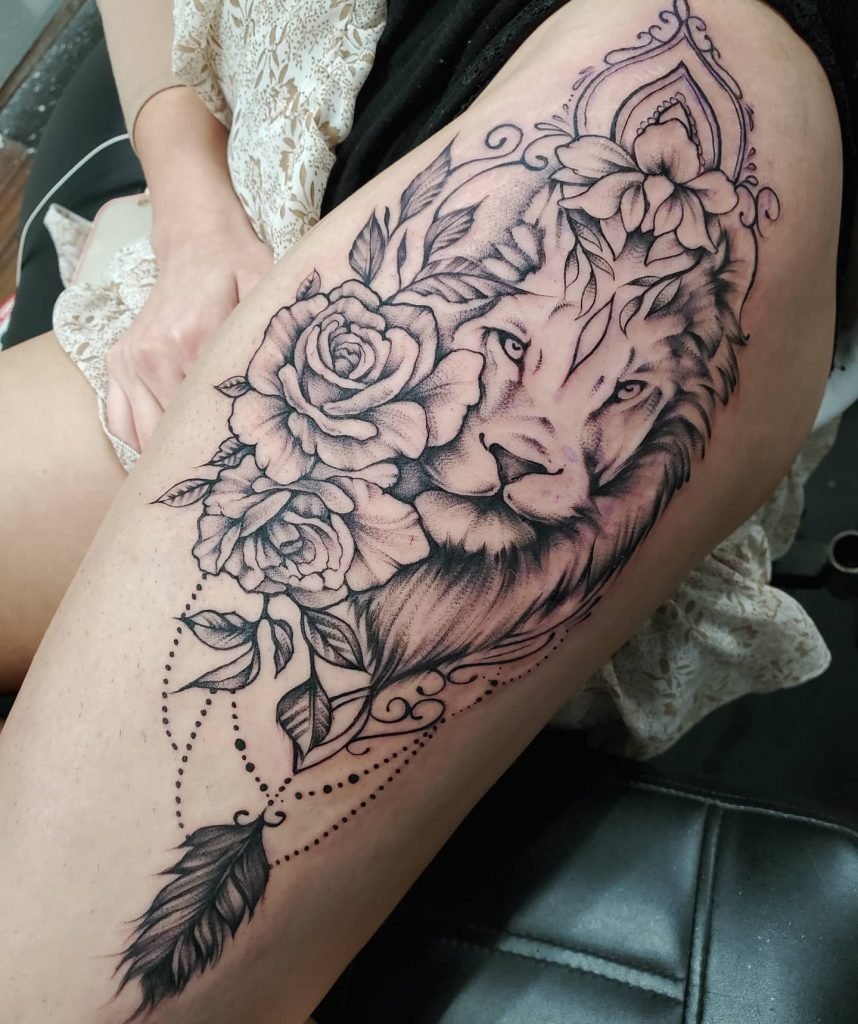 @razo_tattoo via InstagramIn earlier times lions were worshipped and admired and in ancient Egypt, they were also associated with spiritual animals. Primitive cave art also had the topic of lion hunts as their subject. From this, we can understand the importance of lions in the tribal culture and the meanings associated with them are power, loyalty, honor, courage, and protection.

People who are interested in tribal tattoo ideas can definitely get the tribal lion tattoo done for the varied amount of meanings it carries with them. Tattoo artists often use dreamcatchers, feathers, flowers, and multiple mandala designs to ornate this lion tattoo. From this lion tattoo, the tattooer can draw courage just like the primitive people when in times of need. 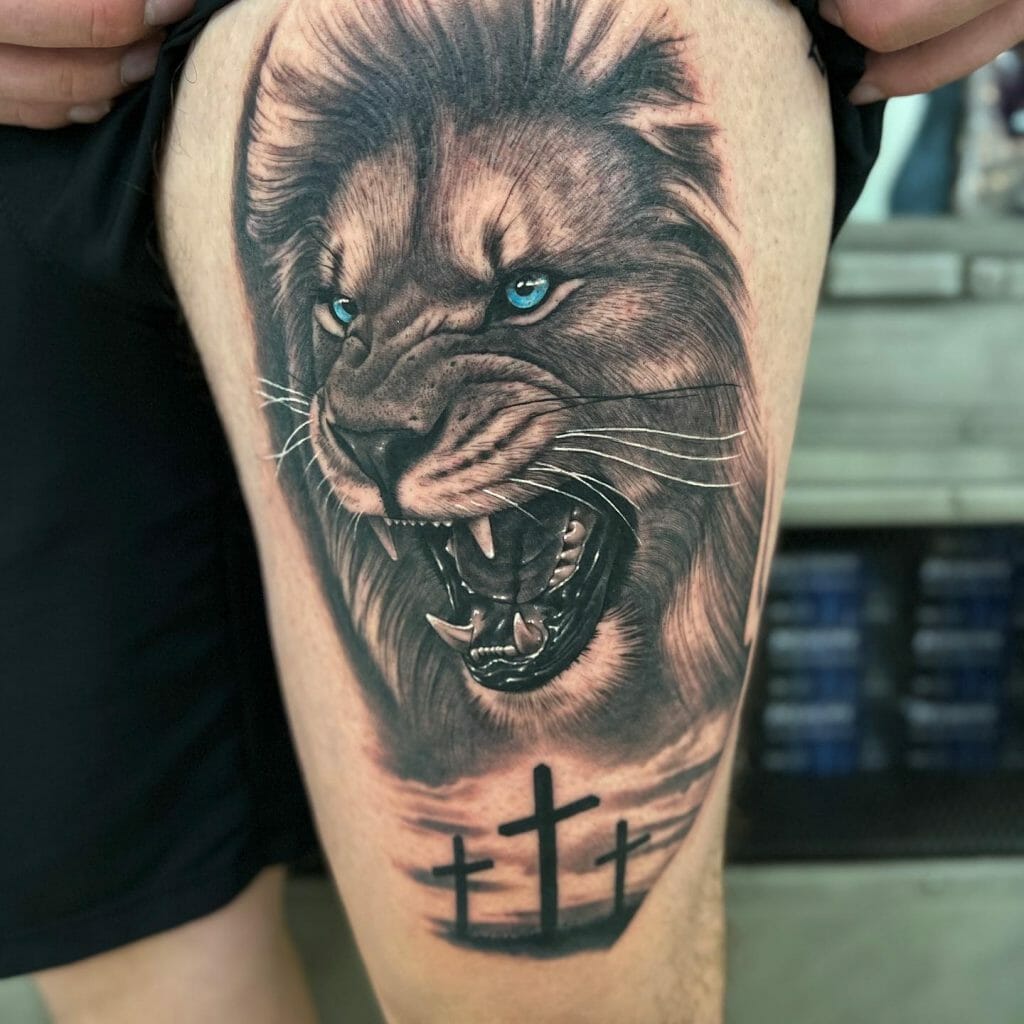 @kevinpatricktat2 via InstagramBoth a Christian and Judah tattoo, the religious lion is one of the best lion tattoos available on the market. Several mentions of lions have been found both in biblical stories and in the Judaic faith. Mostly done in black ink this lion tattoo is extremely popular among religious people who are ardent believers of their faith.

In Christianity, the lion is sometimes associated with Jesus Christ, and doing this tattoo would be a great way to pay a homage to the savior himself. The religious lion tattoo design can be done in multiple ways like a lion with halo tattoos, lion and lamb tattoos, or a lion with a thorn crown representing Christ himself. 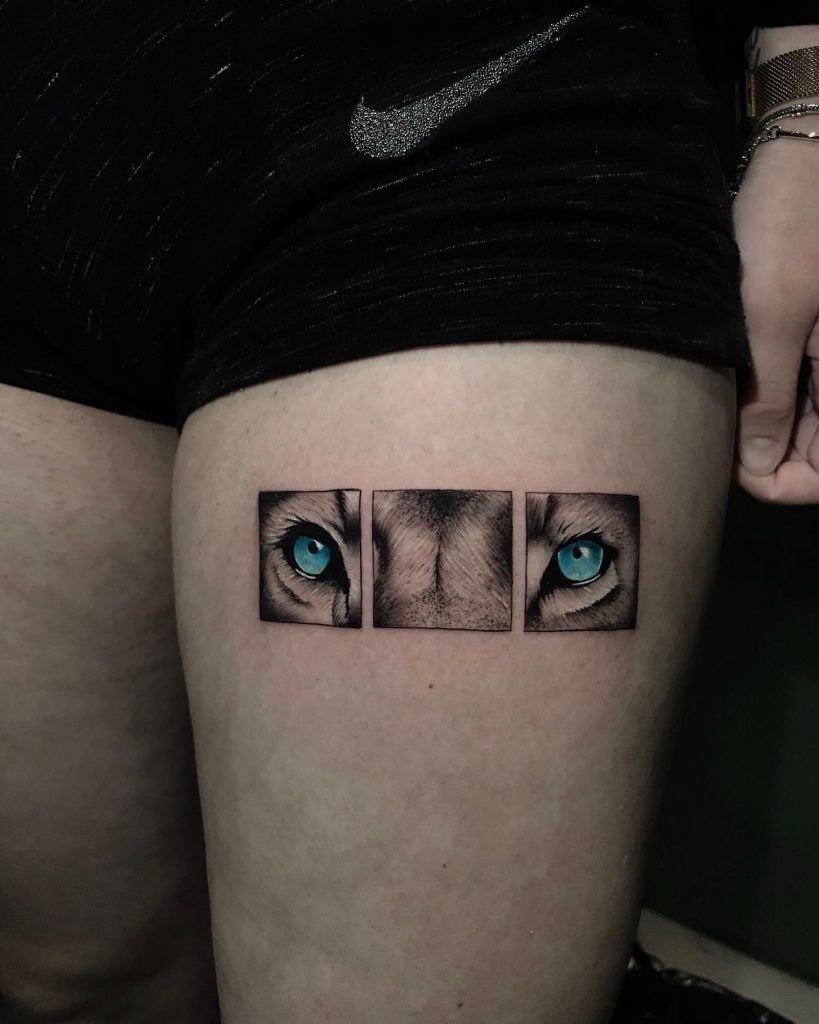 @rembrandt_tattoo via InstagramWilliam Shakespeare quoted ‘The eyes are the window to your soul’ and the lion’s eyes are enough to rattle the hearts of any viewer. Either done using black or blue ink these lion tattoos ranges from small to medium.

Rage, power, courage, and strength are the qualities that are reflected in these lion tattoos and if you possess or want to achieve similar qualities then this is a great tattoo choice. These tattoos are both popular among men and women and must not be confused with the tiger eyes tattoo. 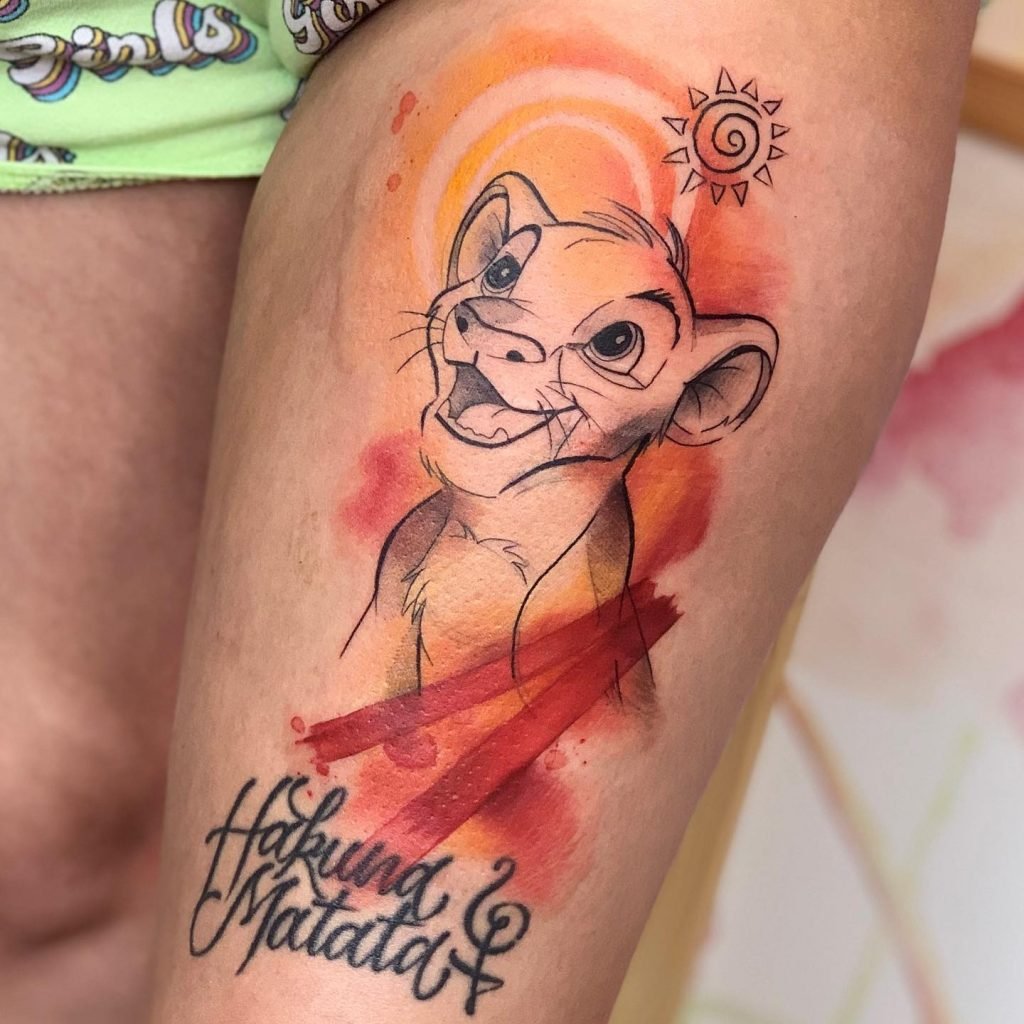 @_pinkypie_83 via InstagramIt’s hard to believe if someone says that they are not aware of the Lion King movie or cartoon. The characters of Simba, Mufasa, Nala, Timon, and Pumba are popular creations and are both loved by children and adults alike. Many people get inked with these lion tattoos for the love and reminiscence they have for their childhood.

Now the Lion King tattoos can be done in different styles for extracting different meanings. When the tattoo of Simba is done it shows the emotional and physical growth of a person from childhood to adulthood, when Mufasa and Simba are done together it shows the father and son relationship, and when all the three Mufasa, Nala, and Simba are inked it shows the value of family. 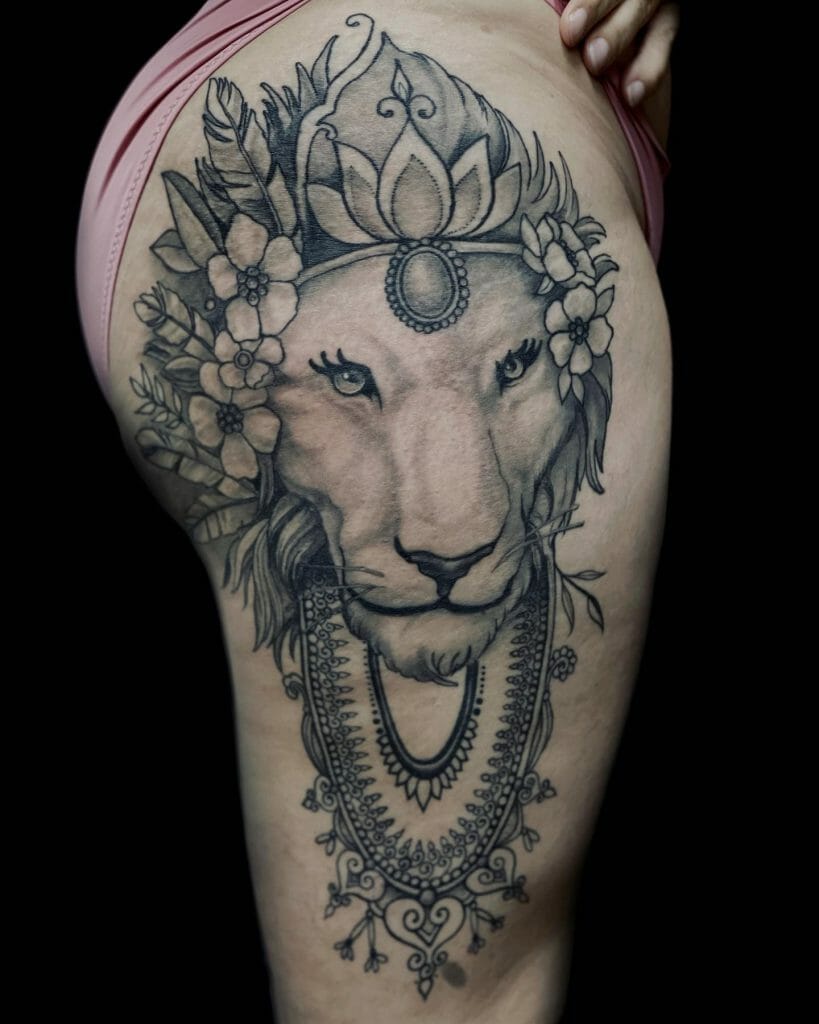 @melodytattoos via InstagramThese thigh tattoos for women are one of the most eye-catching tattoo ideas which make a bold statement. In the animal kingdom, the lions live mostly in a group or pride where the male lion is the symbol of leadership and strength whereas the lioness tattoo demonstrates motherhood and family.

These lioness tattoos are done by women who are the sole provider of the family and also raise their children just like a lioness who hunts and raises her cubs. This lion tattoo on thigh female has long been associated with feminine power and is mostly done with black ink. Ranging from medium to large a tattoo artist mostly ornates these lioness tattoos with flowers, jewels, or feathers to further beautify this tattoo design. 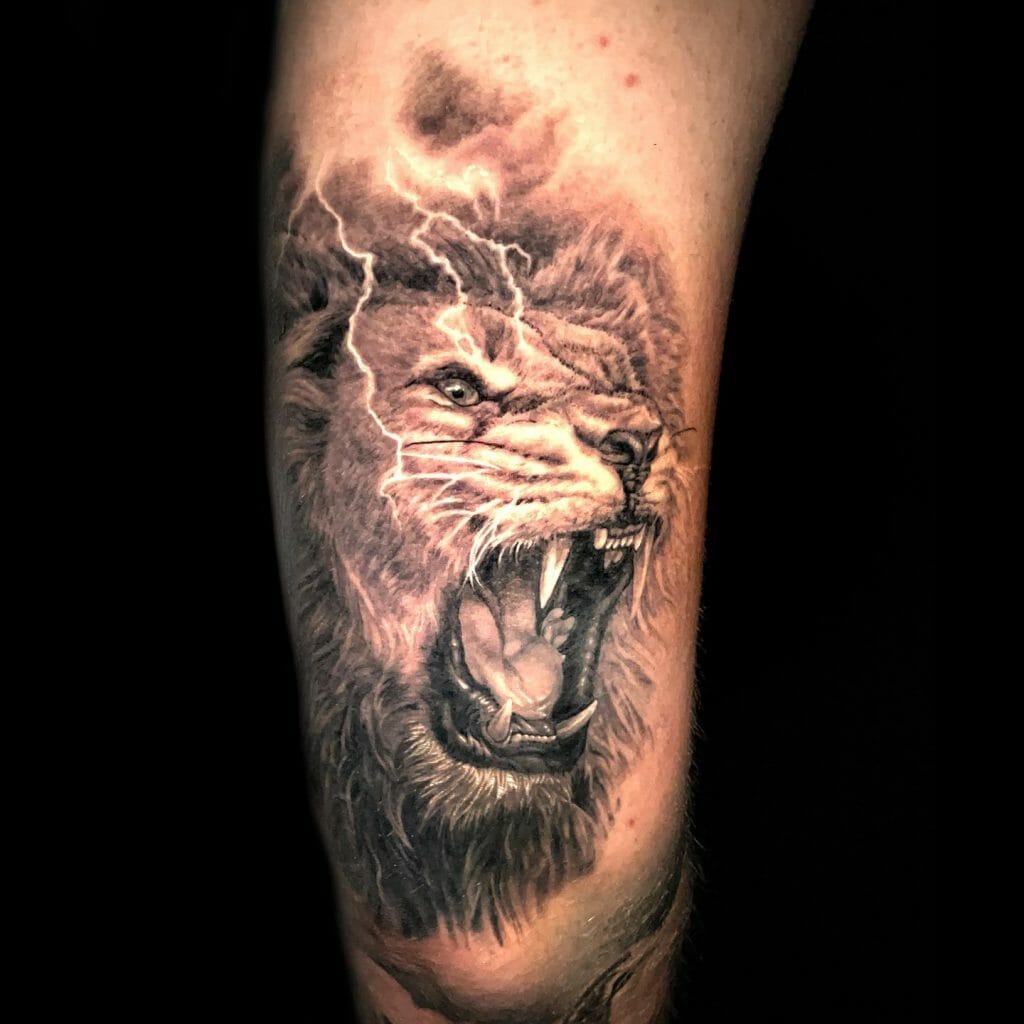 @jackmatisse via InstagramMostly done in the form of realistic lion tattoos this thigh lion shows the strength and power this beast poses. A beautiful tattoo choice among wild animals this ferocious lion can be either done as a traditional lion tattoo with black ink or with colors. Extremely popular among men this angry lion tattoo mainly demonstrates the idea of masculinity.

The owner of these leg tattoos will never back down in the face of danger and will always protect their family at all costs. These thigh tattoos for men also act as a symbol of warning to others and are a reminder not to intrude in their affairs. In a similar bold way, the lion also warns his pride of any danger with its roar. 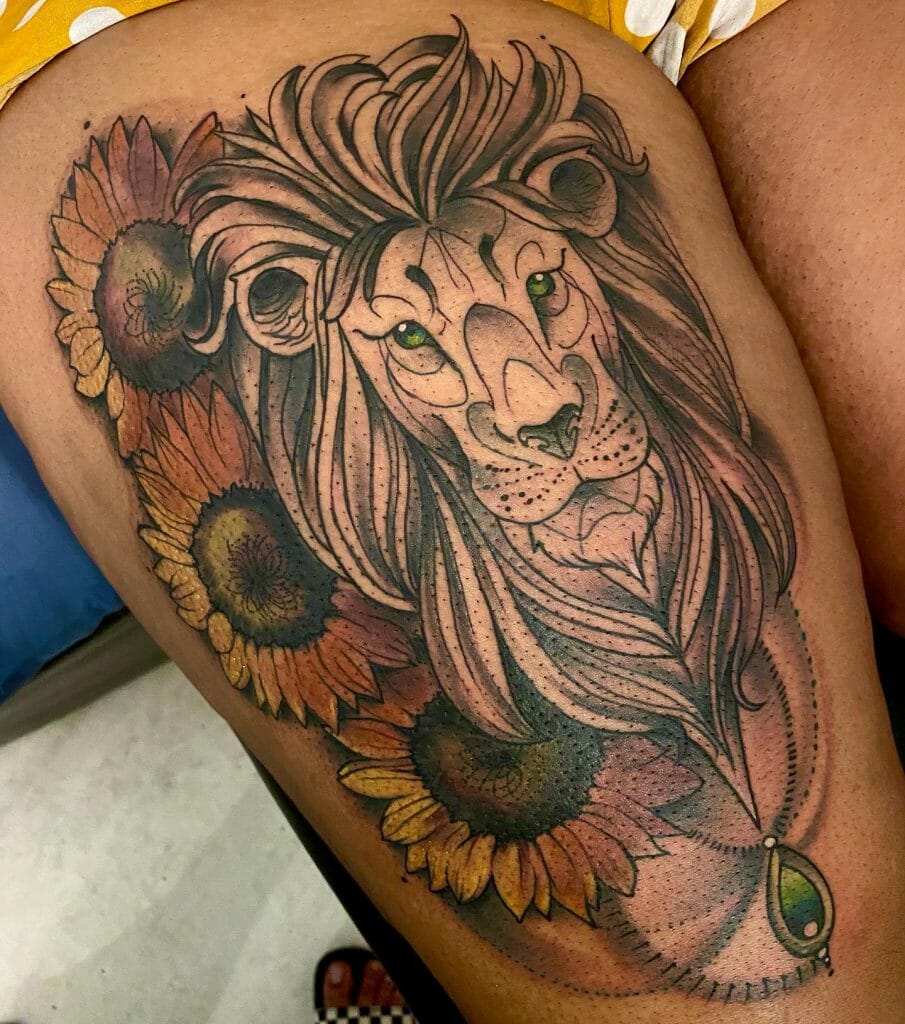 @nickitattoos via InstagramWith its magnificent mane, the lion head tattoos are one of the best tattoos one can own. This great lion tattoo is mostly done using black and highlighted with other inks for effect. Ranging from medium to large sizes they can be done in various ways representing a variety of meanings.

Simply putting a lion’s face will show the fierce and dangerous nature of the beast, when done as Leo tattoos it will reflect the meaning of the zodiac and other traits of that person, or it can be even done as a lion of Judah tattoo which also is the emblem of the Ethiopian flag. The lion face tattoo is often done with bold lines and can also be fused with other objects like flowers, crosses, leaves, or clocks.

Lion With Crown Tattoo On Thigh 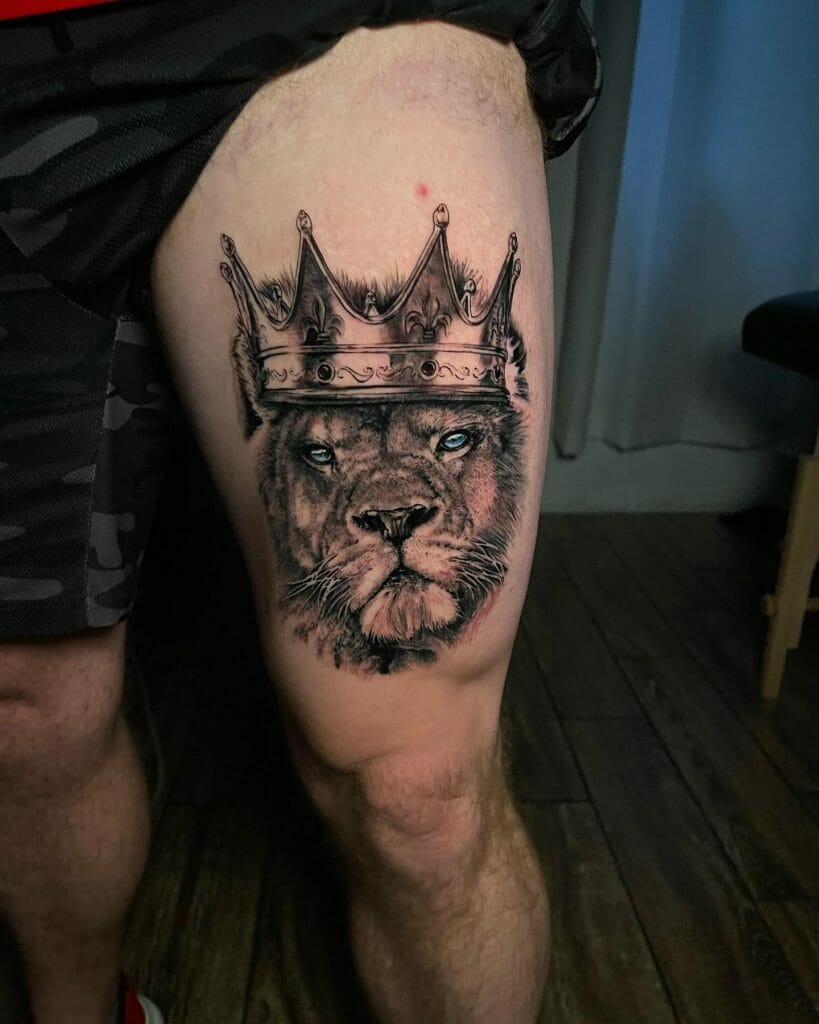 @anovak215 via InstagramBe it as the front thigh or side thigh tattoos the lion with the crown is probably one of the coolest lion tattoos with varied meanings. Firstly due to its association with royalty and majestic mane it has been often called the king of the jungle. For that purpose, the crown is a perfect fit and the tattooer can get inked with this design sharing a similar vibe with other people.

These lion tattoos can also have religious leanings where the crown represents the thorn crown of Jesus or it can be seen as the lion of Judah. People with ardent religious beliefs can get this tattoo done for such meanings. Sometimes a lion cub tattoo is done with a crown which shows that it will follow its father’s footsteps similarly as a child does to his parents.

The other tattoo ideas that can be done with lion thigh tattoos are: